After three consecutive away games, it’s a return to Selhurst Park for Palace as they welcome high-flying West Ham United to south London on Tuesday, 26th January.

The start of the year provided a tough test for the Eagles, securing a hard-fought point at the Emirates Stadium against Arsenal in-between tough trips to Wolverhampton Wanderers and Manchester City.

Returning to south London for the first time in three weeks means an opportunity to build on positive recent results at home, drawing with Leicester City and beating Sheffield United.

However, West Ham arrive in superb form. Unbeaten in five league games – winning their last three – they sit seventh in the table, just two points behind champions Liverpool in fourth. 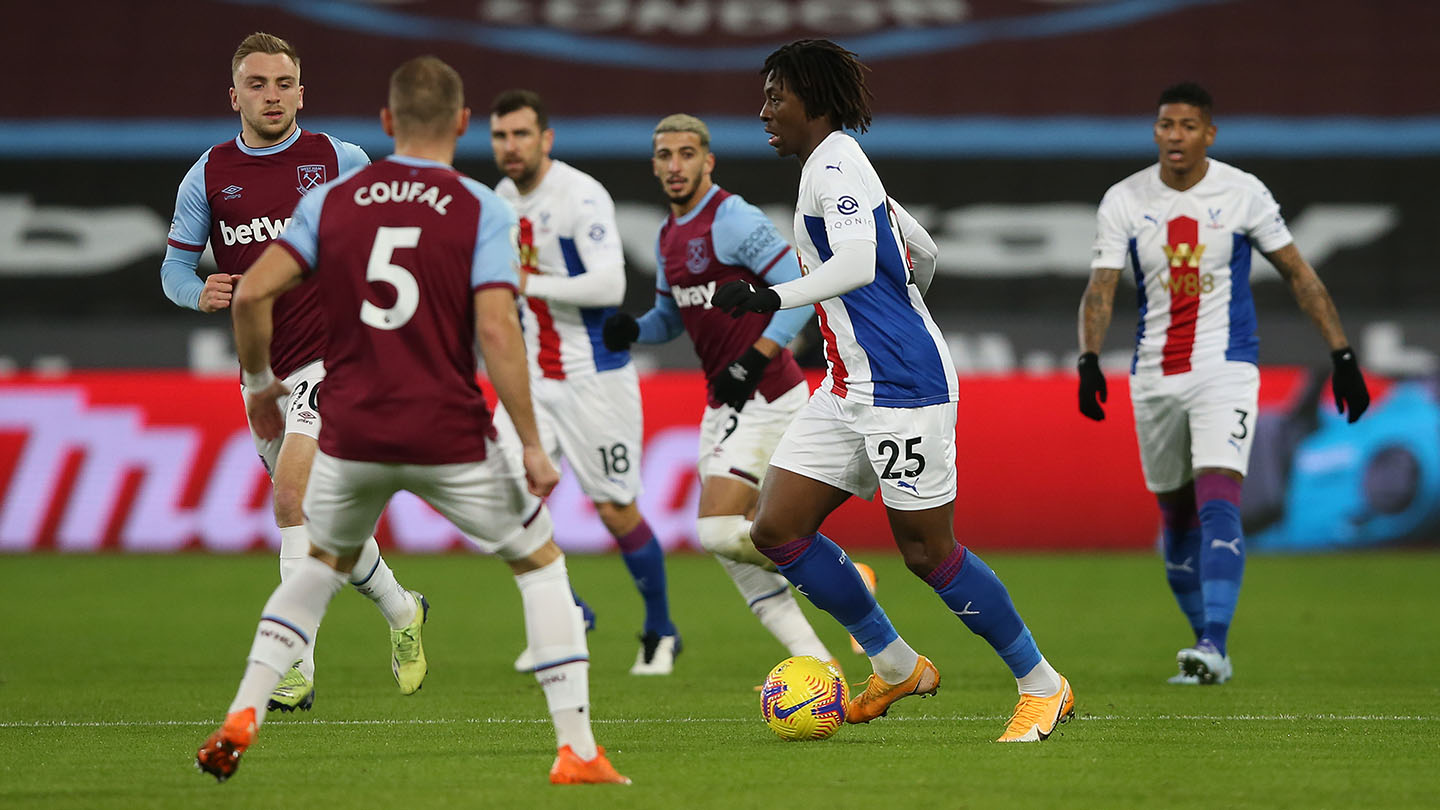 David Moyes’ side have put in some impressive performances away from home, beating Leicester 3-0 at the King Power Stadium, and scoring three times in the final 10 minutes to rescue a point at Tottenham Hotspur.

Contests between these two sides normally guarantees goals. Neither side has kept a clean sheet against the other in the past seven meetings.

The last top-flight goalless draw between the pair was almost 50 years ago at Upton Park in March 1970 – Palace kept a clean sheet that day against a West Ham side containing Geoff Hurst, Jimmy Greaves and Bobby Moore.

In recent years it hasn’t simply been goals, but goals of the highest quality. The reverse fixture this season saw Christian Benteke’s opener cancelled out by a stunning overhead kick from Sebastien Haller, while Jordan Ayew’s last minute wondergoal was one which Roy Hodgson proclaimed would “live long in the memory”.

The fixture is always a meaningful one for James Tomkins, who made more than 200 appearances for West Ham in a 20-year spell from the youth academy to the first team. Cheikhou Kouyate will also be familiar with the opposition, after four years with the Hammers before moving to south London.

West Ham are enjoying their best start to a Premier League season in the last 10 years, sitting 13 points better off than they were at this stage last season. Much of that improvement can be put down to their defensive record, having conceded 22 goals, 10 fewer than after 19 games in the previous campaign.

The Hammers can also rely on a potent attacking unit. Nine of their Premier League goals, a third of their total, have been scored in the final 15 minutes of games, including three against Spurs. Manuel Lanzini will be a familiar threat, having scored four times against the Eagles - however, he has failed to find the net in their past four meetings.

Palace are unbeaten in their last four league games against West Ham (W2 D2), their longest unbeaten streak against the Hammers in the competition.

Only Fulham (1) have picked up fewer points in Premier League London derbies so far this season than West Ham (5 – W1 D2 L2), who have lost five of their last six away London derby matches, drawing the other.

Roy Hodgson will continue to monitor the progress of Jeffrey Schlupp and Mamadou Sakho, both of whom have been sidelined in recent games through injury. Wilfried Zaha returned to first-team training after missing the match at Manchester City, but James Tomkins will miss out.

David Moyes made eight changes for his sides' convinving FA Cup win against Doncaster Rovers on Saturday, meaning he can recall a number of rested players for the trip to south London. The only long-term absentee is full-back Arthur Masuaku, who remains out after undergoing knee surgery.

Palace v West Ham will be shown live in the UK via BT Sport. Full details can be found here.

The official Palace app’s match centre is the place to be for everything you need during the Hammers clash. With live stats and alerts, a running match commentary feed and lineups the moment they’re released as well as all an instant match report and post-match reaction from Palace TV, there’s no need to leave the app to follow the Eagles’ efforts.