Eagles and Toffees play out another 0-0 in league opener

The opening day of the Premier League campaign for Everton and Palace saw their respective campaigns start with a goalless stalemate in south London. 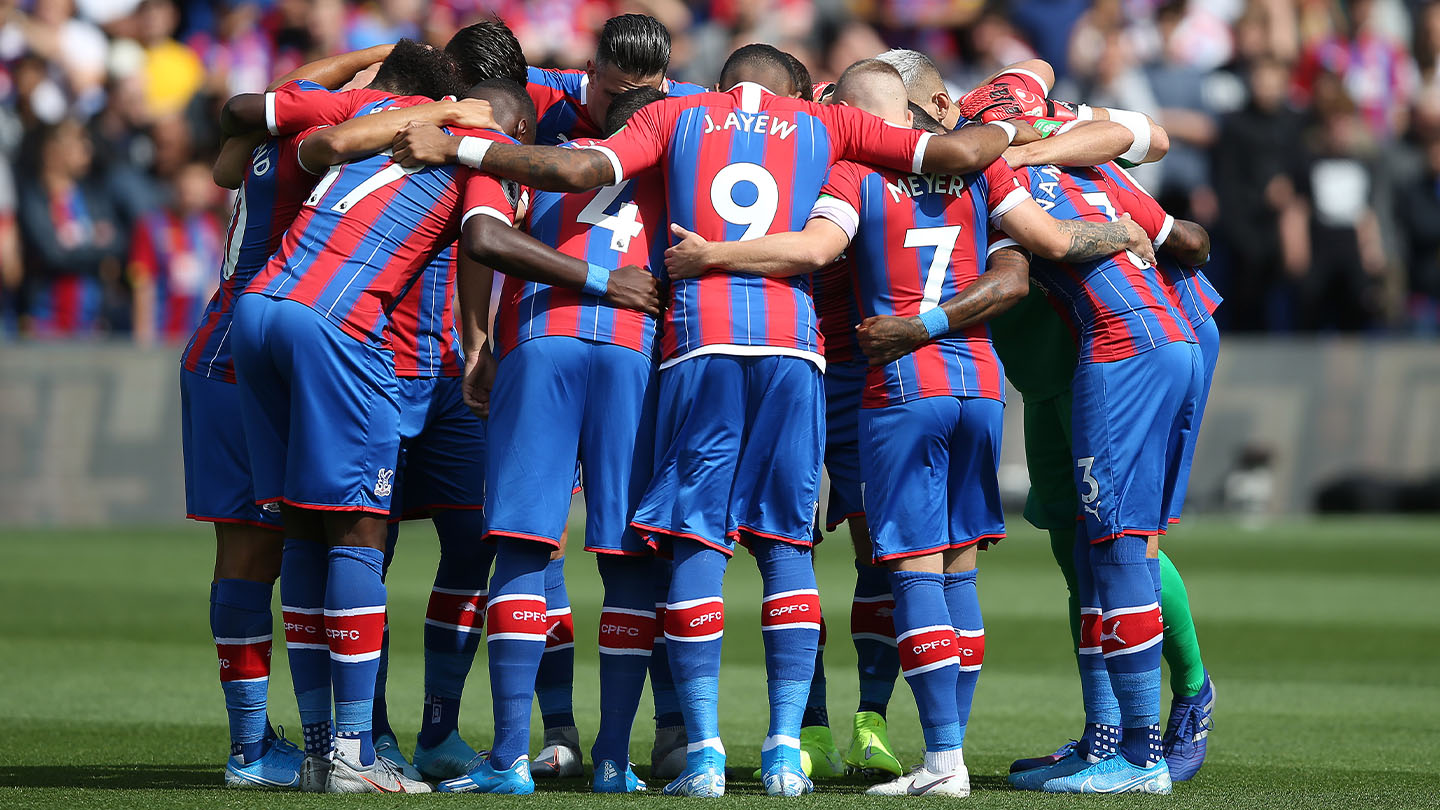 Just 90 minutes of Premier League football had occurred at Selhurst Park – the entertaining Bournemouth victory on the last day of the season - since the 0-0 between the Eagles and Everton at the home of Palace back in April.

And despite a summer transfer window and full pre-season, the opening 30 minutes showed exactly why Marco Silva and Roy Hodgson’s respective sides had shut each other out just a few games ago, with barely any moments of note.

An early let-off for Palace did arrive on 90 seconds with Gyfli Sigurdsson scuffing a volley wide from 10 yards out. However, after that, the game became a somewhat turgid affair in the middle of the park, with both teams struggling to bring possession through into the final third.

A well-worked corner from the Merseysiders on 13 minutes saw Richarlison lose his marker, making a darting run to the centre of penalty area, where Sigurdsson’s corner found the Brazilian; the resulting effort from the former Watford man was blocked superbly by Christian Benteke on the line.

The first save of the afternoon arrived on 31 minutes with Vicente Guaita continuing his fine form from his debut season, thwarting well from an unmarked Seamus Coleman at the back post from six-yards.

A real ‘where were you?’ moment came in the 35th minute with the first VAR decision going out over the Selhurst Park screen for a ‘Checking Red Card’ decision for a potential sending off for captain Luka Milivojevic. 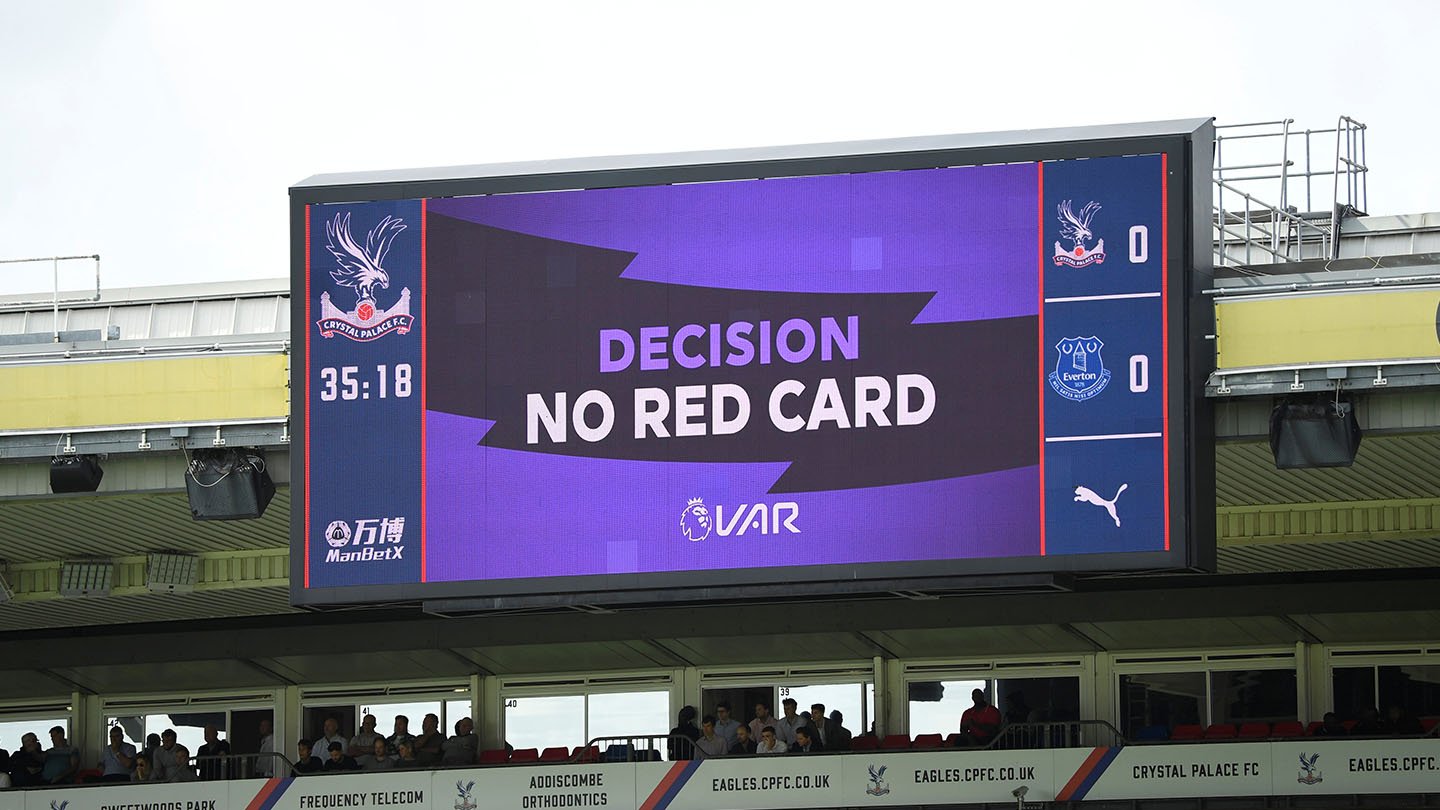 As Selhurst Park held its breath, Jonathan Moss eventually signalled for play to resume with an Everton throw-in.

The momentary break in play for VAR seemed to galvanise the Eagles, with Hodgson’s side enjoying the lion’s share of possession and looking the most likely to score before half-time.

Some quick thinking from James McArthur from a quick free-kick in the 40thminute found Max Meyer in the penalty area; the midfielder dropped his shoulder, cut in and his goal-bound effort was deflected just over.

From the resulting corner, Martin Kelly threw himself at the ball at the back stick, which resulted in the Eagles winning another corner via a deflection from Dominic Calvert-Lewin.

Another deep corner followed from Milivojevic, this time Kelly stepping aside for his centre-back counterpart, Scott Dann, with Dann’s threatening header blocked by Morgan Schneiderlin.

The last moment of the game of the half came in the first minute of injury time, with Everton having just made an enforced change with Andre Gomes coming off for Jean-Philippe Gbamin.

The personnel change and tactical tweaking almost saw Palace capitalise with the lively Meyer working space for himself to deliver a cross, however, the effort narrowly missed its intended target of Benteke. 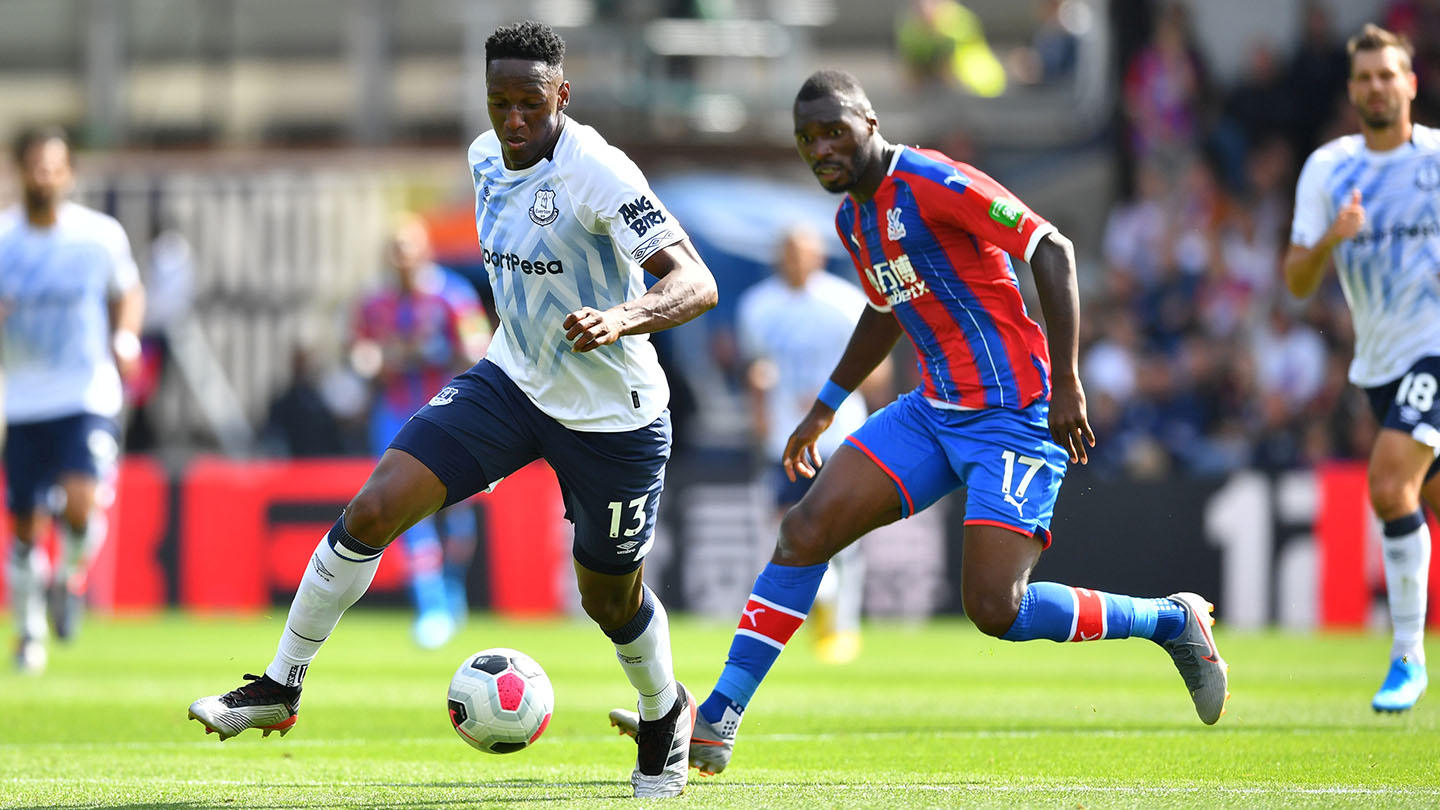 The second half looked to be going the same way as the opening half an hour, however, on 51 minutes Patrick van Aanholt came to the Eagles’ rescue, to make it two goal-line clearances for Palace this afternoon; the Dutchman positioning himself perfectly to smack away Sigurdsson’s neat flicked effort.

Palace’s first and second attempts of the second half came just before the hour-mark, with both opportunities courtesy of some excellent work from Benteke.

The first effort saw the Belgian win the ball just inside Everton’s half from a dawdling Gbamin; running at the Toffees retreating backline, a smart run – and an even smarter ball from Benteke – released Ayew through one-on-one.

Selhurst Park rose as our summer signing opened up his body to finesse past Jordan Pickford with his right foot. However, Pickford saved well.

Benteke was again the orchestrator just one-minute later, cutting inside on the edge of Everton’s box, with the striker just getting the ball nicked away as he lined up the shot. Fortunately for Palace, the ball landed at an unmarked Meyer but Pickford again came out on top from six-yards out. 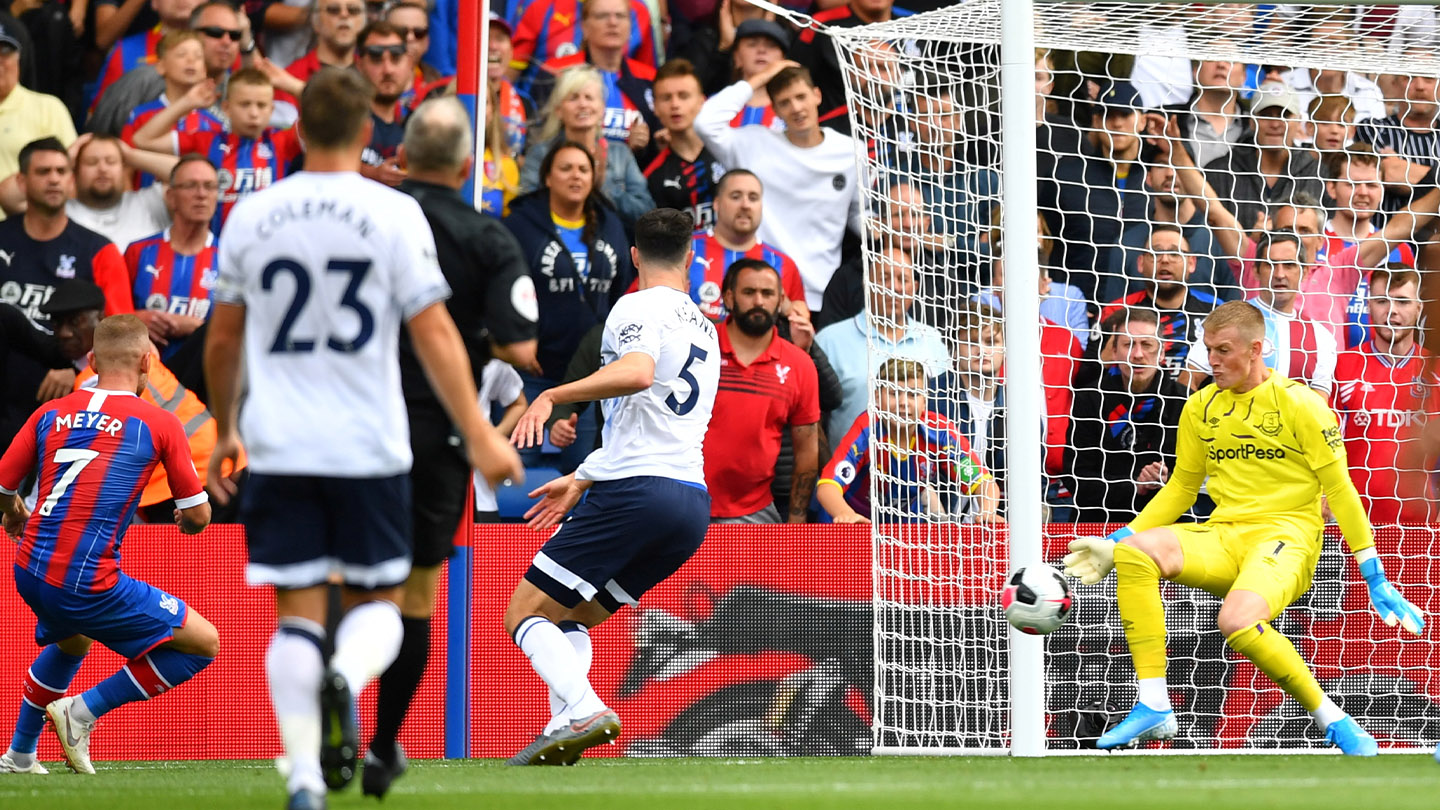 With Hodgson sensing three points were on offer for his Eagles, the 72-year-old brought on Wilfried Zaha for Jordan Ayew with 27 minutes left to play; Selhurst Park erupted as the fan favourite entered the 2019/20 Premier League season. 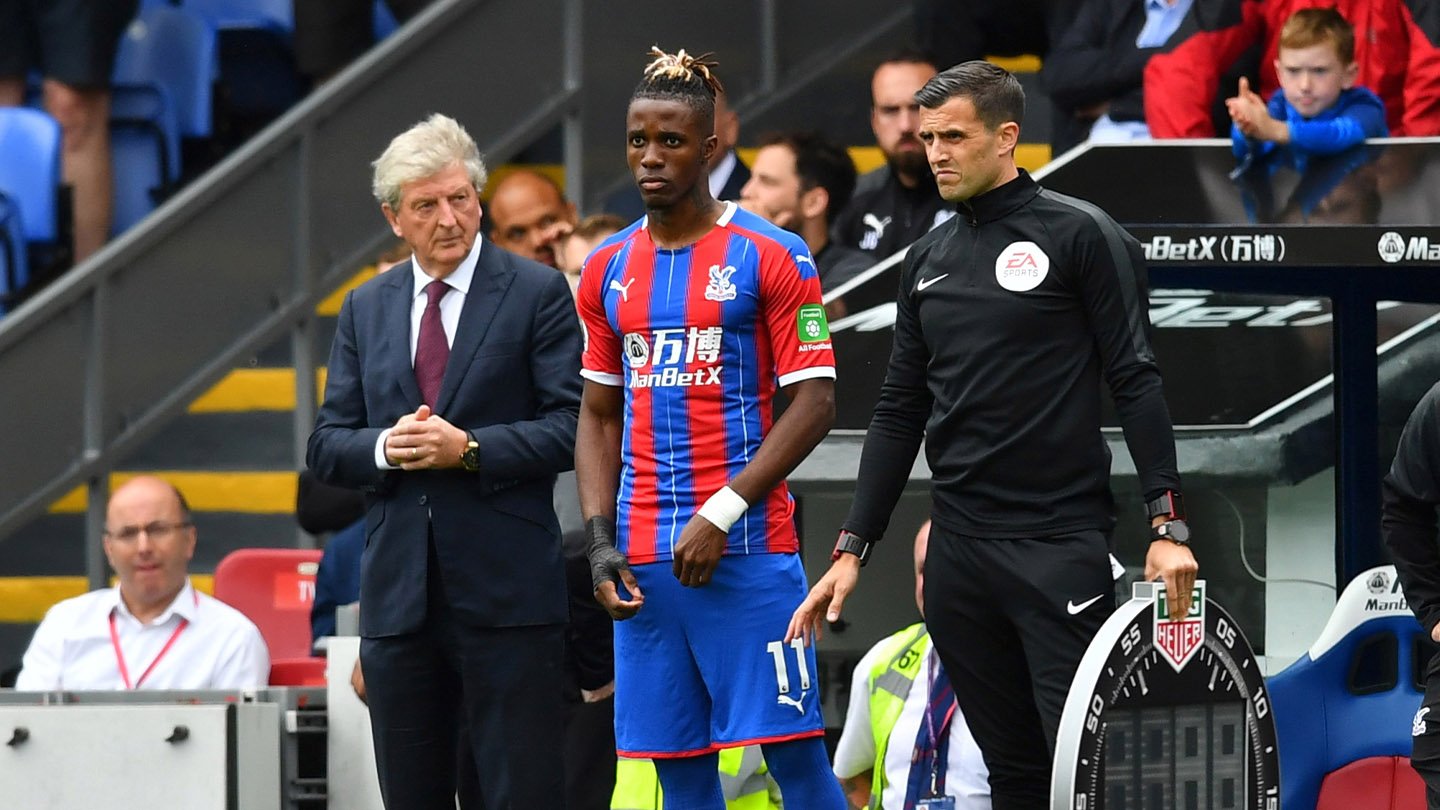 There was a chance of six potential debuts across both sides this afternoon, and the second arrived in the 69thminute with Moise Kean replacing Calvert-Lewin. The Italian international’s arrival was almost delayed though with Richarlison curling an effort wide, when the onlooking fans had been expecting the net to bulge.

The introduction of Zaha saw Palace intensify their dominance of the Toffees, with Patrick van Aanholt nearly giving the south Londoners a deserved lead in the 74thminute after a clever ball was slipped through by our Ivorian.

The favour fully swung in Palace’s favour two minutes later with Schneilderlin sent-off for a second booking on Milivojevic. 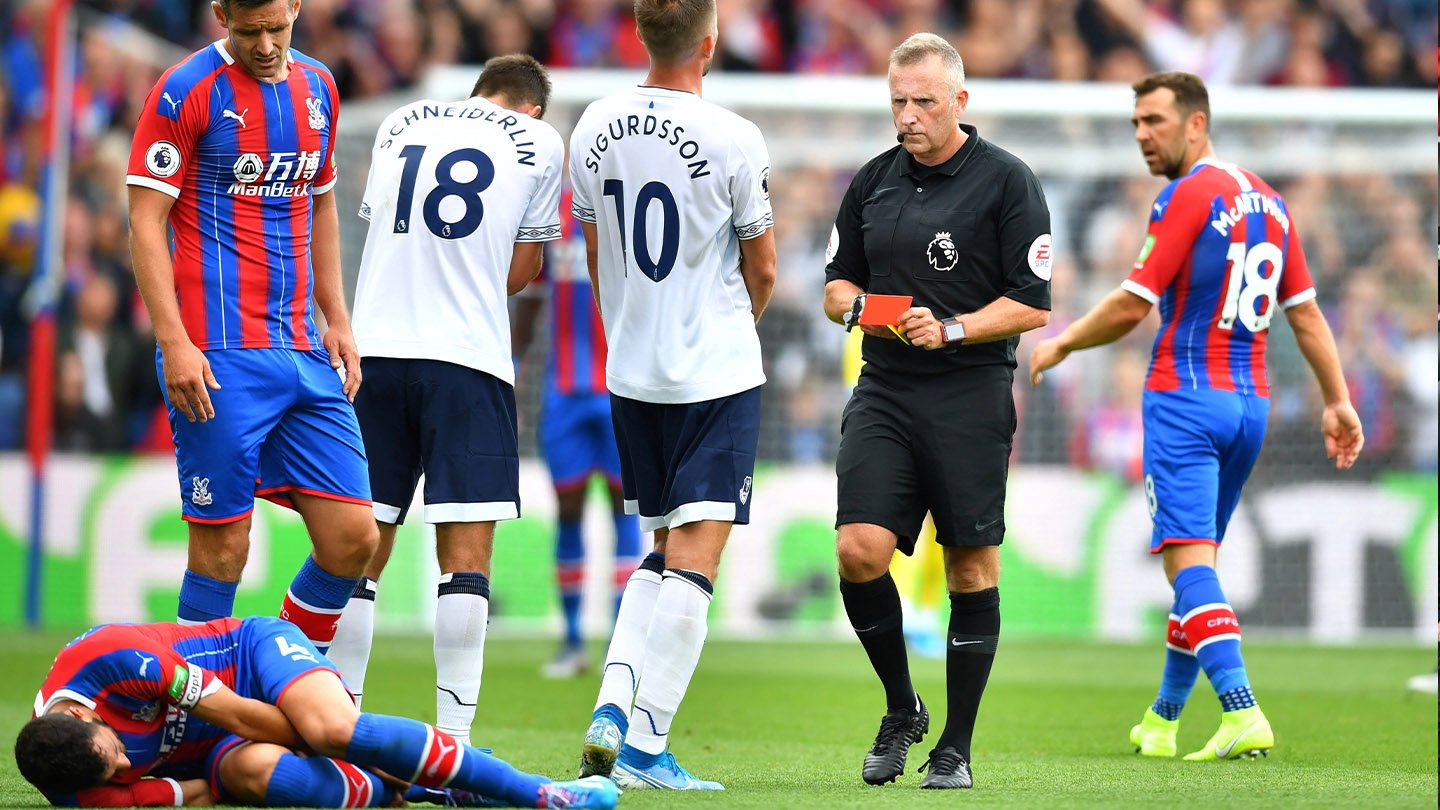 With a man advantage, Hodgson threw on the fresh legs of Connor Wickham for Benteke as Palace looked for the three points to kickstart the new season.

Ultimately, the decisive goal would not come for the red and blue stripes, but there were plenty of positives to take from a well-earned point at home to begin the seventh consecutive season in the top-flight.