Palace back to winning ways with 2-0 win over Huddersfield

Crystal Palace secured all three points at a sunny Selhurst thanks to second-half goals from Luka Milivojevic and Patrick van Aanholt against Huddersfield Town.

On the first matchday that the Premier League launched their ‘No Room For Racism’ campaign, the game against Huddersfield Town was also one that the Eagles knew there was no room for error in.

The opening 10 minutes saw much of the game bogged down in the middle of the pitch, with neither team really able to get a strong foothold on the match.

Wilfried Zaha was looking to stretch the Terriers’ defensive line whenever the Eagles gained possession around the centre-circle but a couple of shrewd interceptions from Huddersfield captain, Christopher Schindler, stopped Zaha in his tracks.

On the 13th minute, a wonderful one-minute tribute broke out around all sections of Selhurst Park, in remembrance to former Palace Foundation player, Damary Dawkins, who sadly passed away at the age of 13 after a battle with Acute Lymphoblastic Leukaemia. 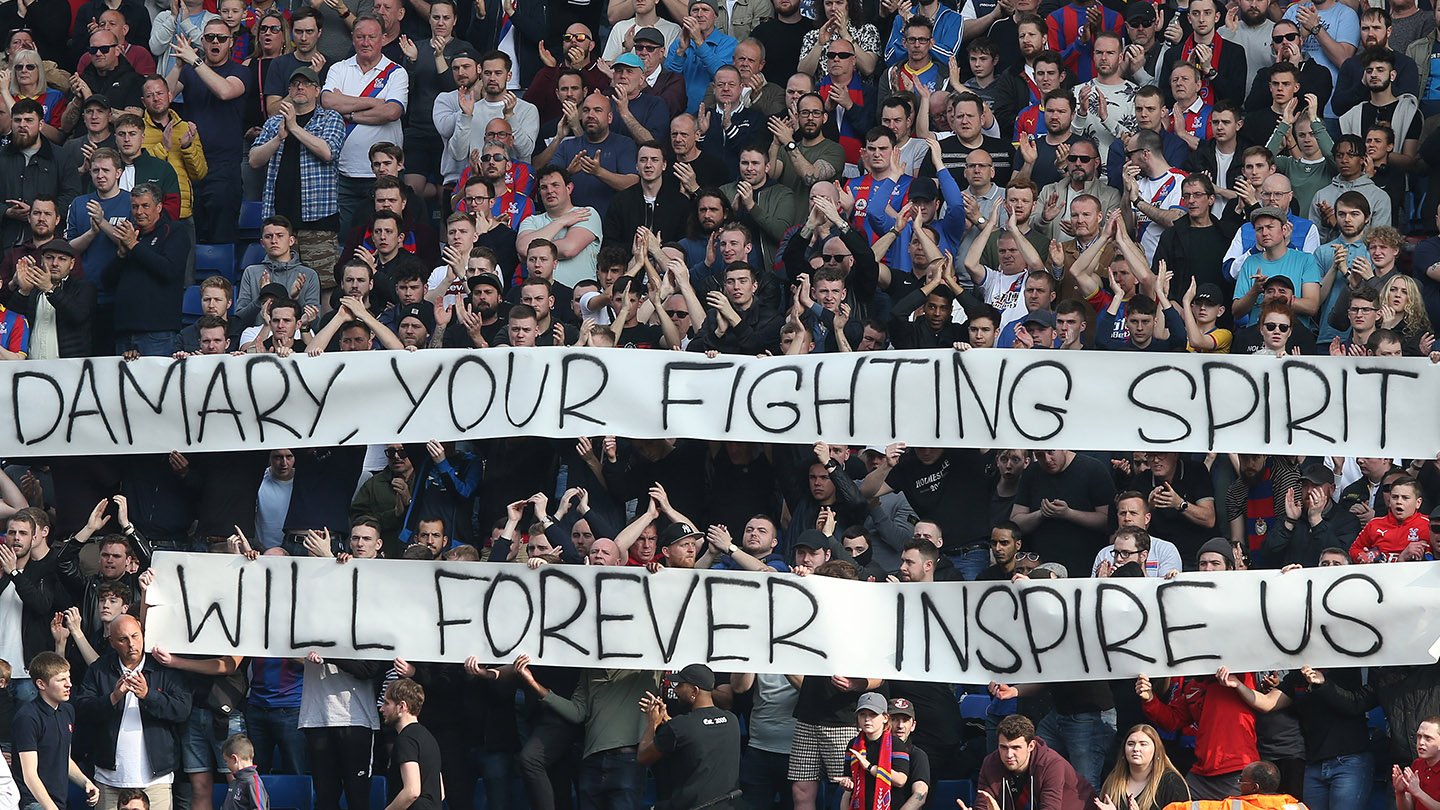 In what would’ve been a fitting tribute to young Damary, Andros Townsend broke down the right-hand side whilst the applause was ringing out around Selhurst but the Terriers defence recovered to stifle the English winger.

The first real chance of the game emerged in the 16th minute after some superb interplay down the left-hand side between Patrick van Aanholt and Zaha, with the former’s incisive pass finding Michy Batshuayi in the box.

The on loan Belgium international dropped a shoulder to find a yard of space, and as Selhurst rose in expectation, German defender, Erik Durm, heroically threw his body in front of the striker as the ball looked destined for the back of the net. 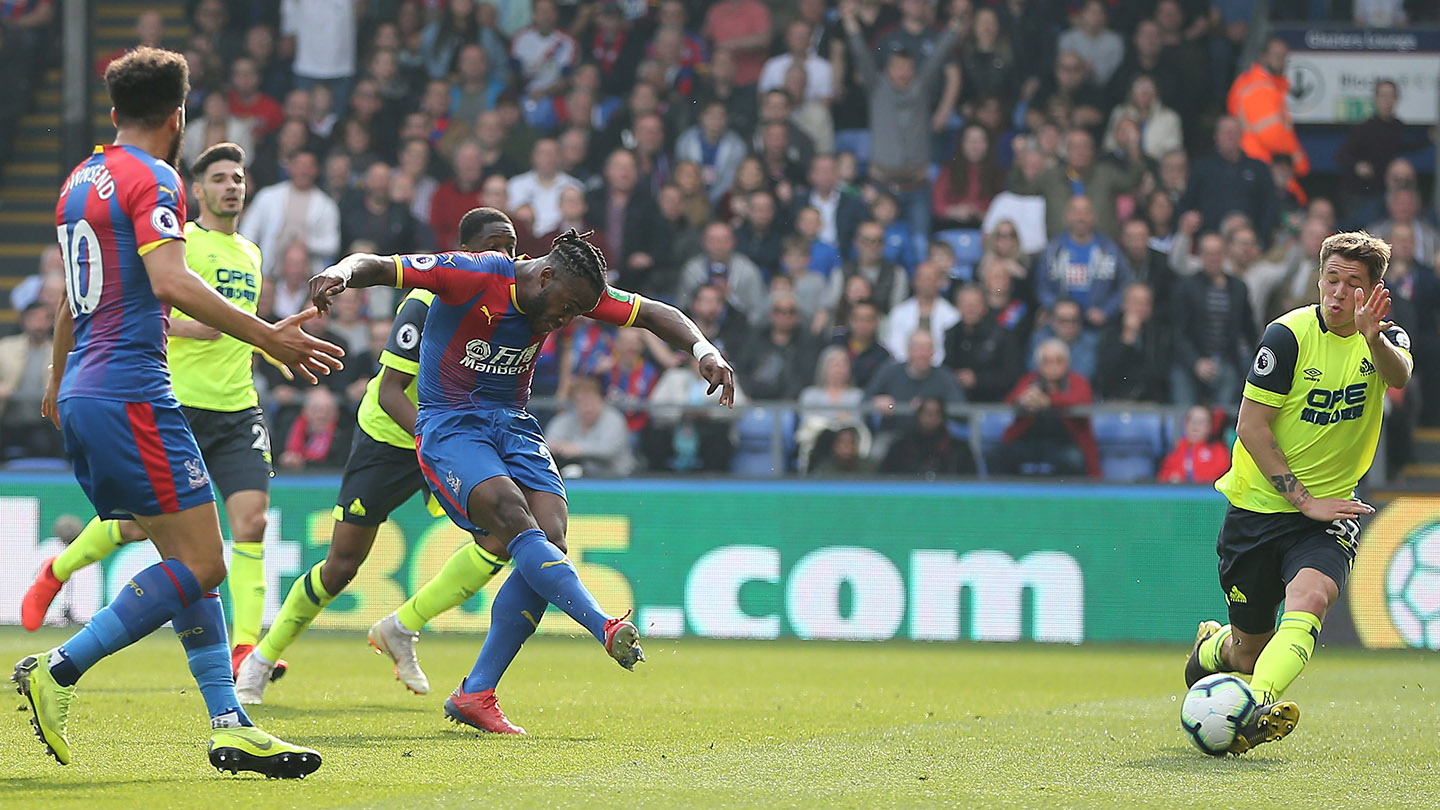 The Eagles had to wait less than a minute later for their next chance, with Jeffrey Schlupp taking a defence-splitting pass in his stride, but the Ghanaian international unfortunately lost his footing as he drew back his left leg.

Palace were firmly on top now, with their third chance in just four minutes arriving via the foot of Townsend - his cross from the left-hand side found Zaha’s head at the back post, with the Ivorian’s effort going agonisingly wide of Hamer’s post.

The Terriers’ first chance of the game fell to Chris Löwe, with Huddersfield capitalising on some uncertainty in the Eagles backline to orchestrate a three-on-two scenario. However, Löwe, unmarked at the back post, was unable to find a way past Vicente Guaita.

Löwe and the Terriers were kicked into life, however, and just two minutes later Guaita was again called into action, this time via the left foot of Löwe, with the Eagles’ No.1 saving smartly down to his left. 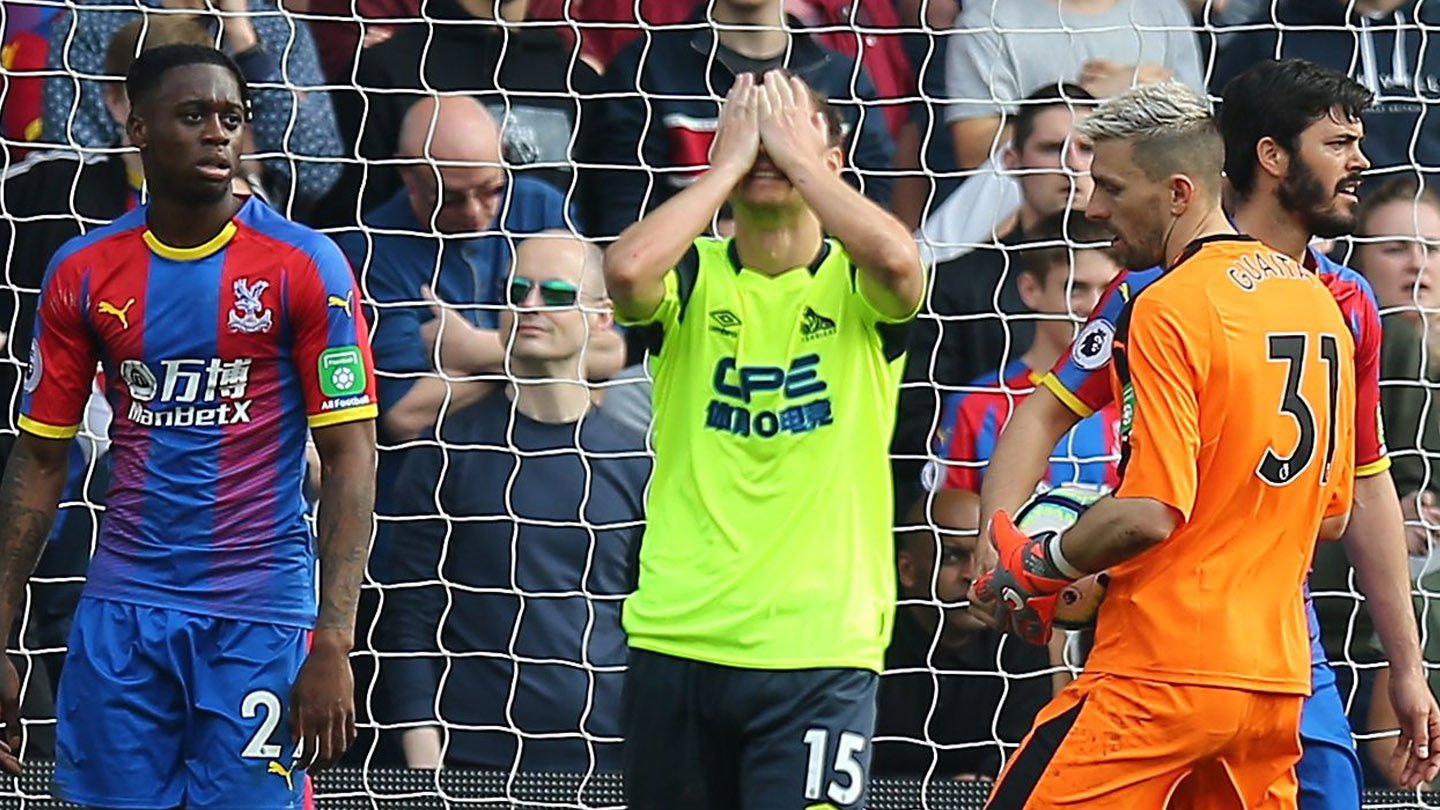 A couple of efforts for each team, Schlupp and Alex Pritchard, respectively kept the game ticking over before a Maradona-inspired moment of magic from Batshuayi teed up Van Aanholt who found Townsend, with the Eagles winger’s shot from outside the box smartly saved by Hamer.

Moments later, in the 37th minute, an over-hit pass from Van Aanholt saw Huddersfield’s Karlan Grant nip in, in front of the returning Scott Dann. Thankfully for Palace, the January signing miscued his dink over Guaita and the rest of the first-half played out without any noteworthy moments. 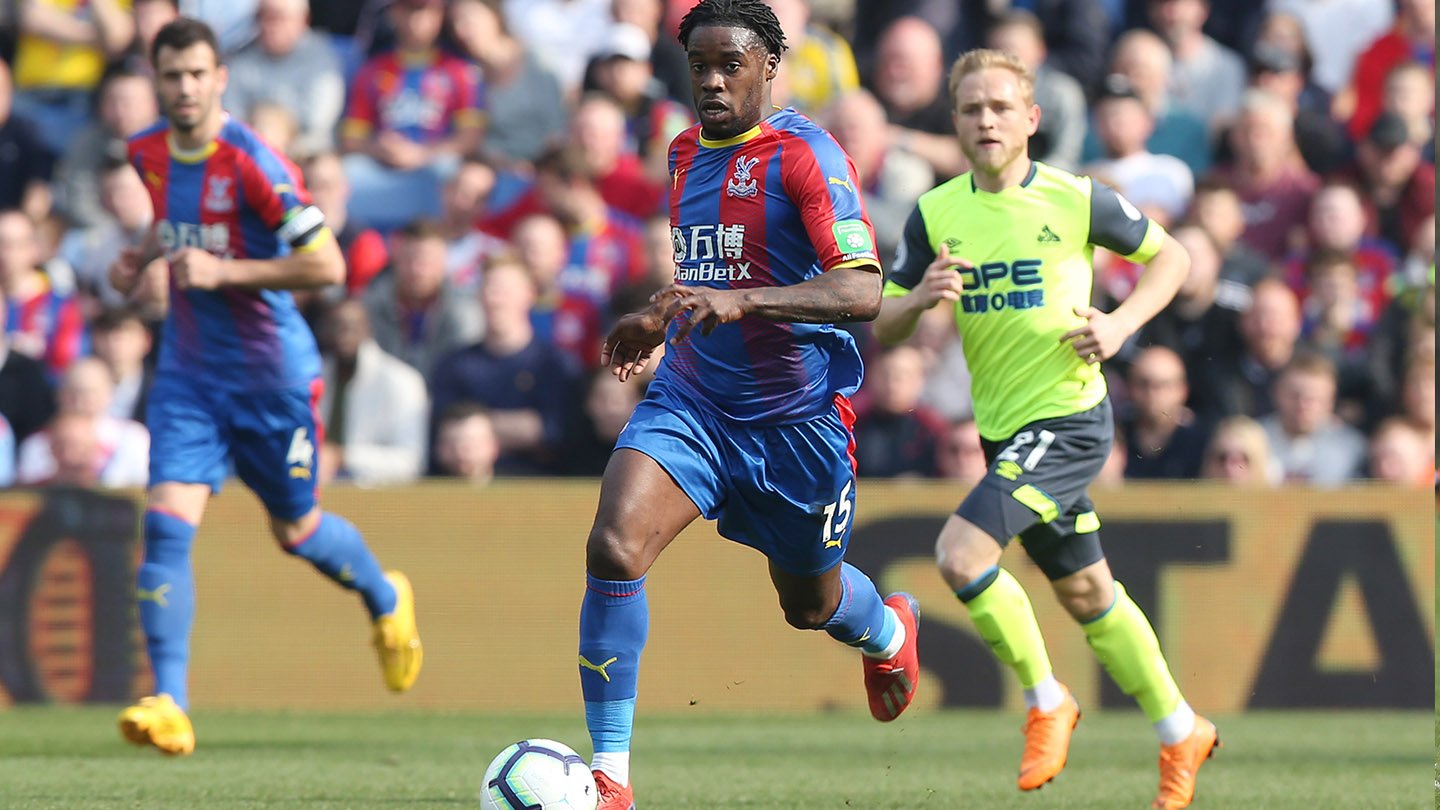 A half-time sub from Roy Hodgson, which saw Max Meyer replaced by James McArthur, as Palace looked to break the deadlock.

That moment almost came in the 53rd minute thanks to the silky feet of Zaha, who danced his way past two Huddersfield defenders, which created an intricate passing move in the Terriers' box, resulting in a bending Van Aanholt effort towards to the top right-hand corner of Hamer’s goal, unfortunately for the Eagles, Hamer was equal to the effort.

A deflected 56th minute effort from Batshuayi brought about a corner and after a few phases of play - that included a punch from Hamer and a header back into the danger area from Townsend – it all ended with a wonderfully taken volley from James Tomkins, outside the area, that was sailing into the bottom corner had it not been for a scrambling Hamer.

Minutes later, Zaha dazzled the Terriers defenders again, cutting out four of them at once with a delightful pass to find Townsend unmarked in the box. However, the Eagles man saw his chance go narrowly wide.

A minute later and this time some great work from Batshuayi with the forward somehow toe-ending the ball to Zaha. The winger was unmarked on the left, but the Selhurst favourite was unable to successfully round Hamer before the Terriers retreated to close out the danger.

That near-assist from Batshuayi was to be the striker’s last involvement with Hodgson bringing on Batshuayi's international counterpart, Christian Benteke, with the manager looking to capitalise on the flurry of chances falling the Eagles’ way.

The breakthrough came in the 75th minute with Palace’s second-half dominance coming to fruition when the referee, Lee Probert, pointed to the spot after Zaha was brought down.

Up step the ever-reliable, Luka Milivojevic, who calmly sent Ben Hamer the wrong way to send the Holmesdale Road faithful into raptures with his 10th league goal this season. 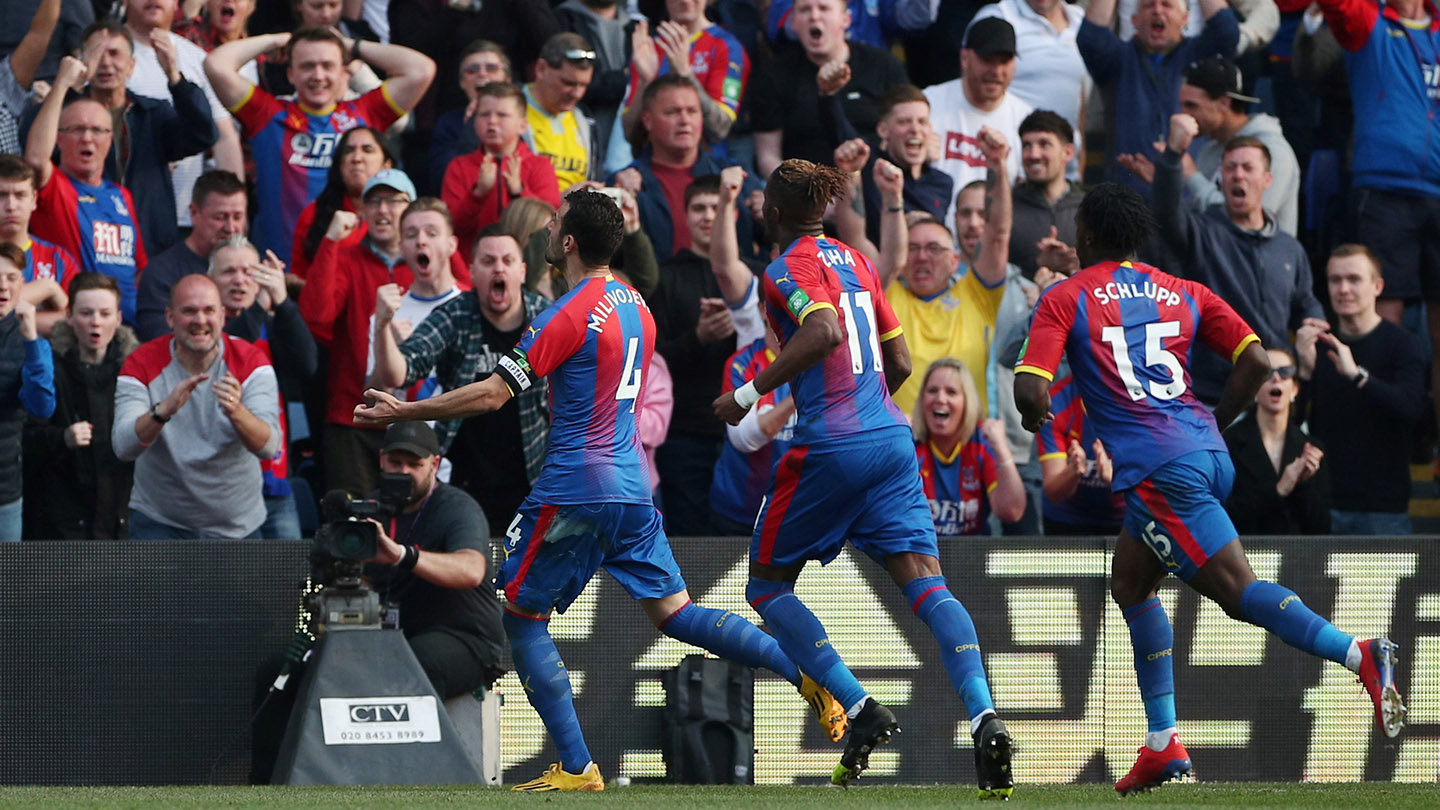 The noise levels would not drop for the rest of the game as Palace went in search of a game-killing second goal, which duly arrived in the 88th minute, with Van Aanholt slotting neatly through the legs of Hamer after being teed up by Zaha. 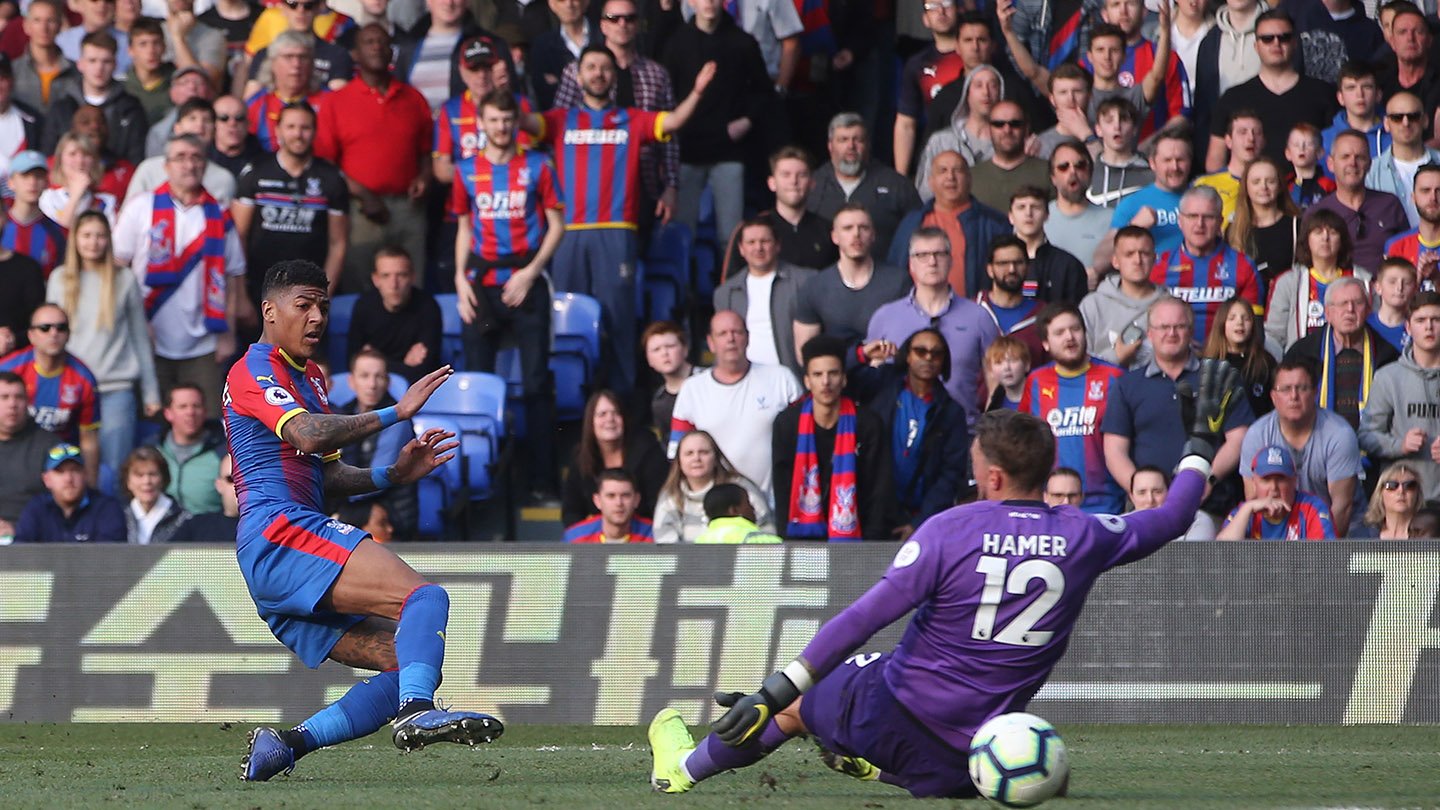 Hodgson’s side comfortably saw out the remainder of the game to get back to winning ways and condemn the Terriers to relegation from the top flight.