Wilfried Zaha's second goal in two games got Palace started before Jeffrey Schlupp punished Ben Mee for a fluffed clearance to give Roy Hodgson's side a well-deserved 2-0 win away at Turf Moor.

Palace started like the home team with a trademark, penetrative run from Wilfried Zaha which saw the winger win a free-kick on the corner of the penalty box down Palace’s left flank. From the resulting set-piece, Luka Milivojevic went close with a whipped effort that fizzed just over the bar. 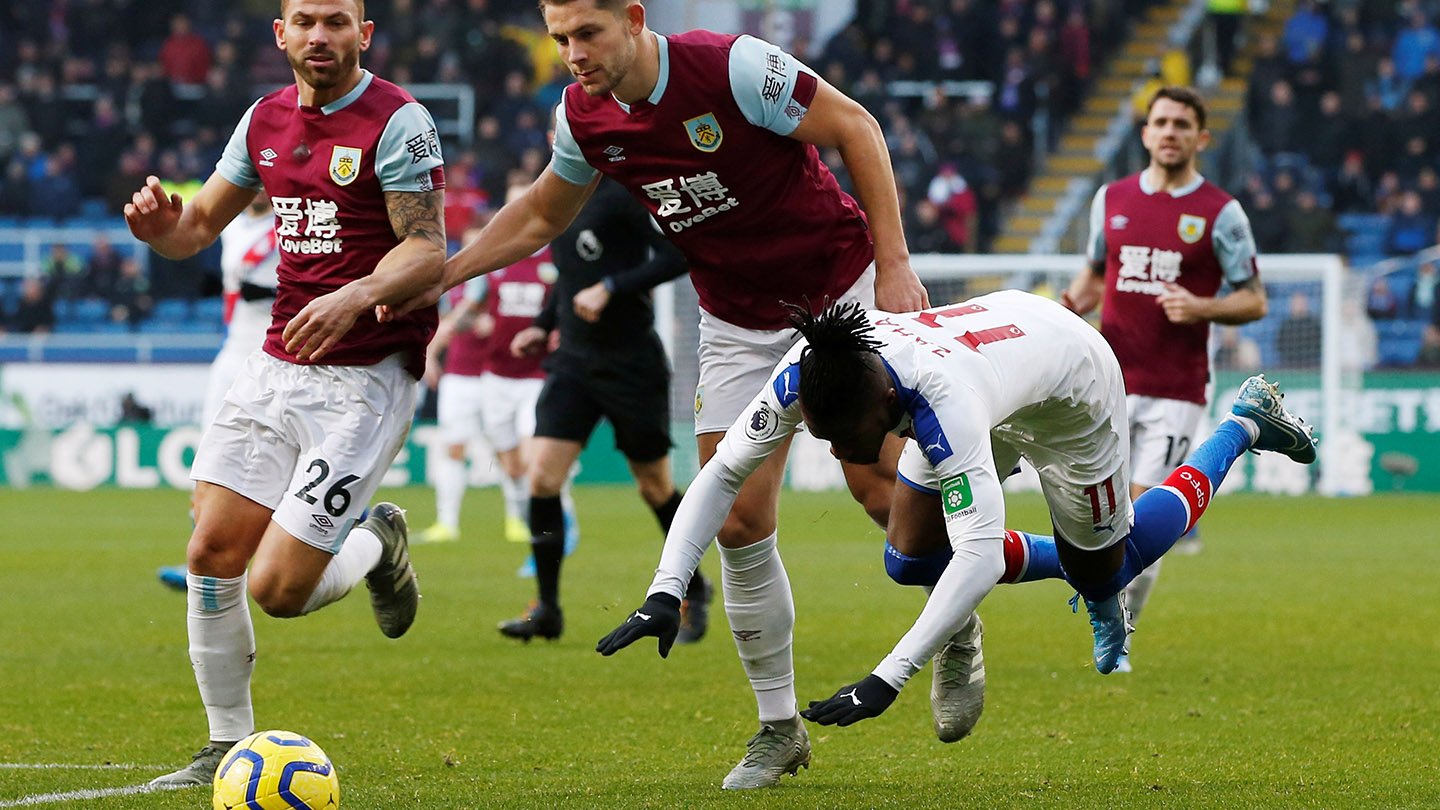 From a trademark Zaha moment to one of Burnley’s own on 10-minutes: a long ball from Ben Mee into the box, knocked down by Chris Wood to Jack Cork on the edge of the area, with the midfielder’s effort going close without troubling Vicente Guaita.

Palace were being forced to drop deeper and defend in solid banks, which limited Burnley’s pressure to further efforts from outside the box. Dwight McNeil going closest during that spell with a deflected effort on 17 minutes that Guaita adjusted well for to accommodate for the ball’s change of flight and pace.

Burnley were forced in to making a first-half sub with Charlie Taylor going down after the Clarets had defended back-to-back corners, with Erik Pieters replacing the left-back on 37 minutes.

Palace thought they’d capitalised on the personnel change in Burnley’s rear-guard when Ayew tapped home from close-range. However, Van Aanholt was penalised for being offside in the build-up.

The move itself was a great one from the Eagles, starting with Van Aanholt being released down the left-hand side. With no teammates in the box the full-back cut-back well to Andros Townsend who faked an attempt on goal to create himself some space and clipped a delightful ball to Cheikhou Kouyate at the back-post. 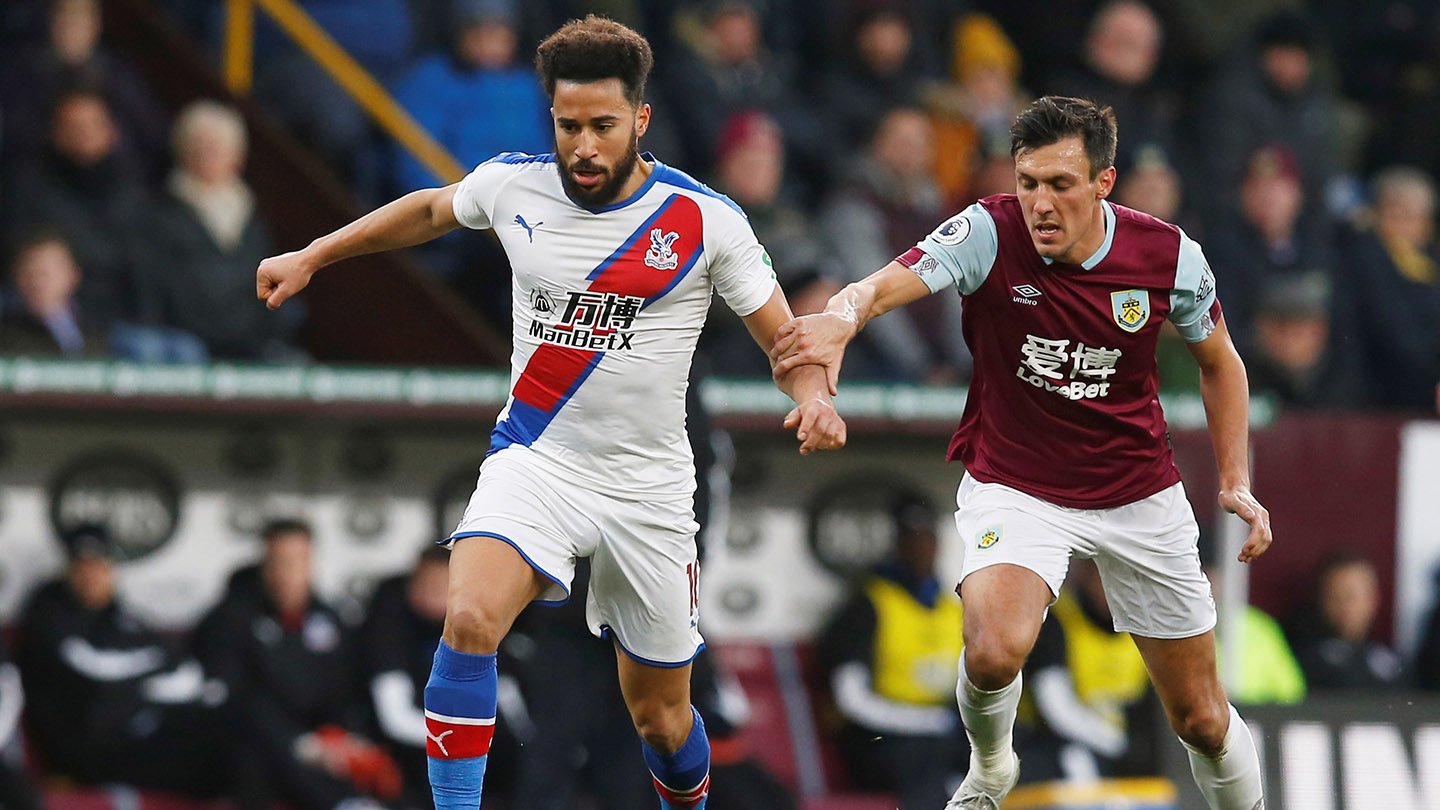 Unfortunately, the midfielder didn’t connect as he would’ve liked, which saw the ball go back across goal, which is where Van Aanholt found himself in possession again but in an offside position.

Just before half-time though the Eagles had their lead. Zaha with his second in as many games with a goal that seemed to catch Sean Dyche’s team unaware. Collecting the ball on the left, the winger drifted rather than dribbled into the penalty area, nonchalantly past Phil Bardsley, before arrowing through Nick Pope’s arms. 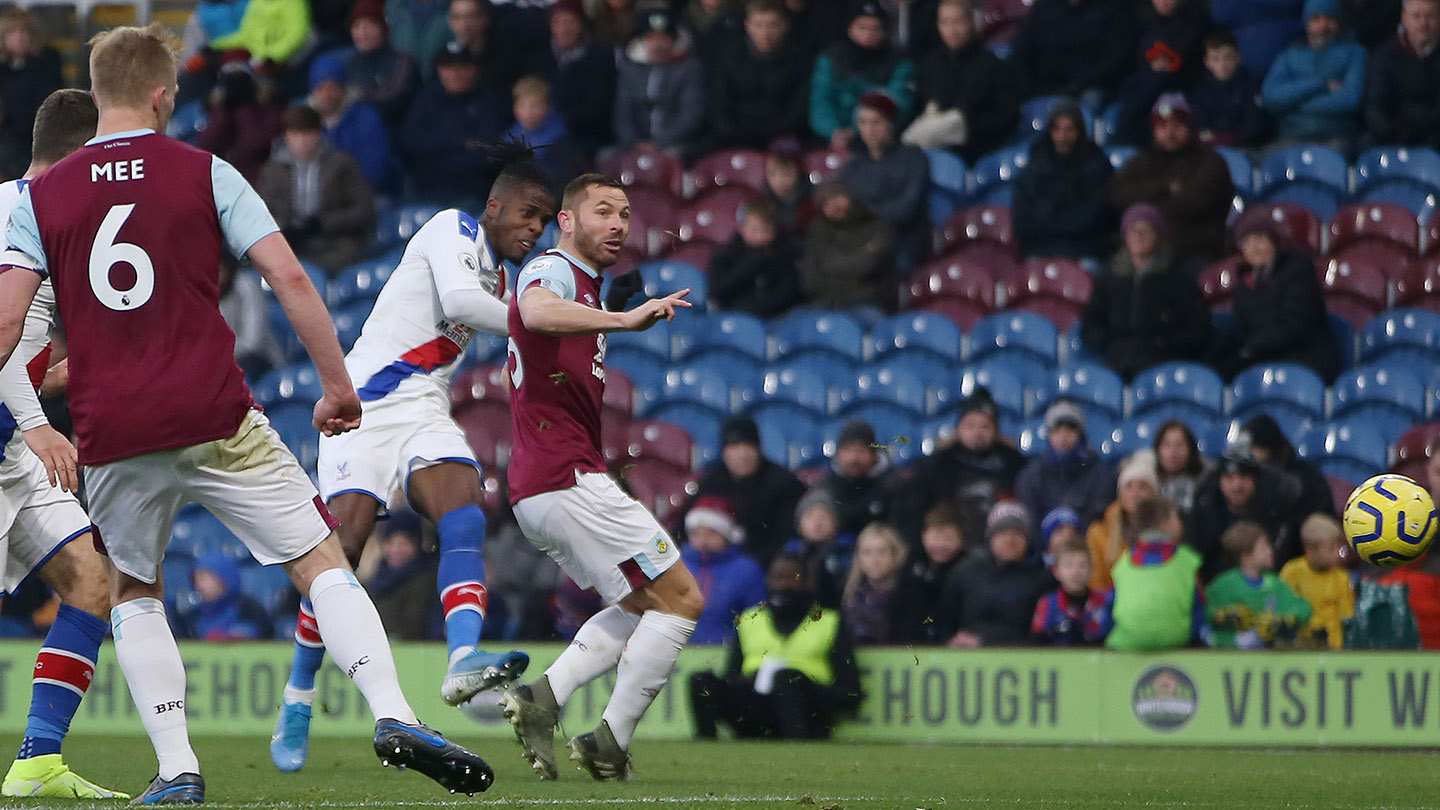 Burnley started the second-half the way Palace ended the first: in the ascendancy. And their explosive start almost paid dividends when a sustained period of pressure saw Pieters volley just the wrong side of Guaita’s post, into the side netting.

Burnley again went close on the hour-mark when Wood latched onto Kouyate’s header back to Guaita, and despite being in front of goal with plenty of time, the striker blazed over. A let-off for the Eagles. 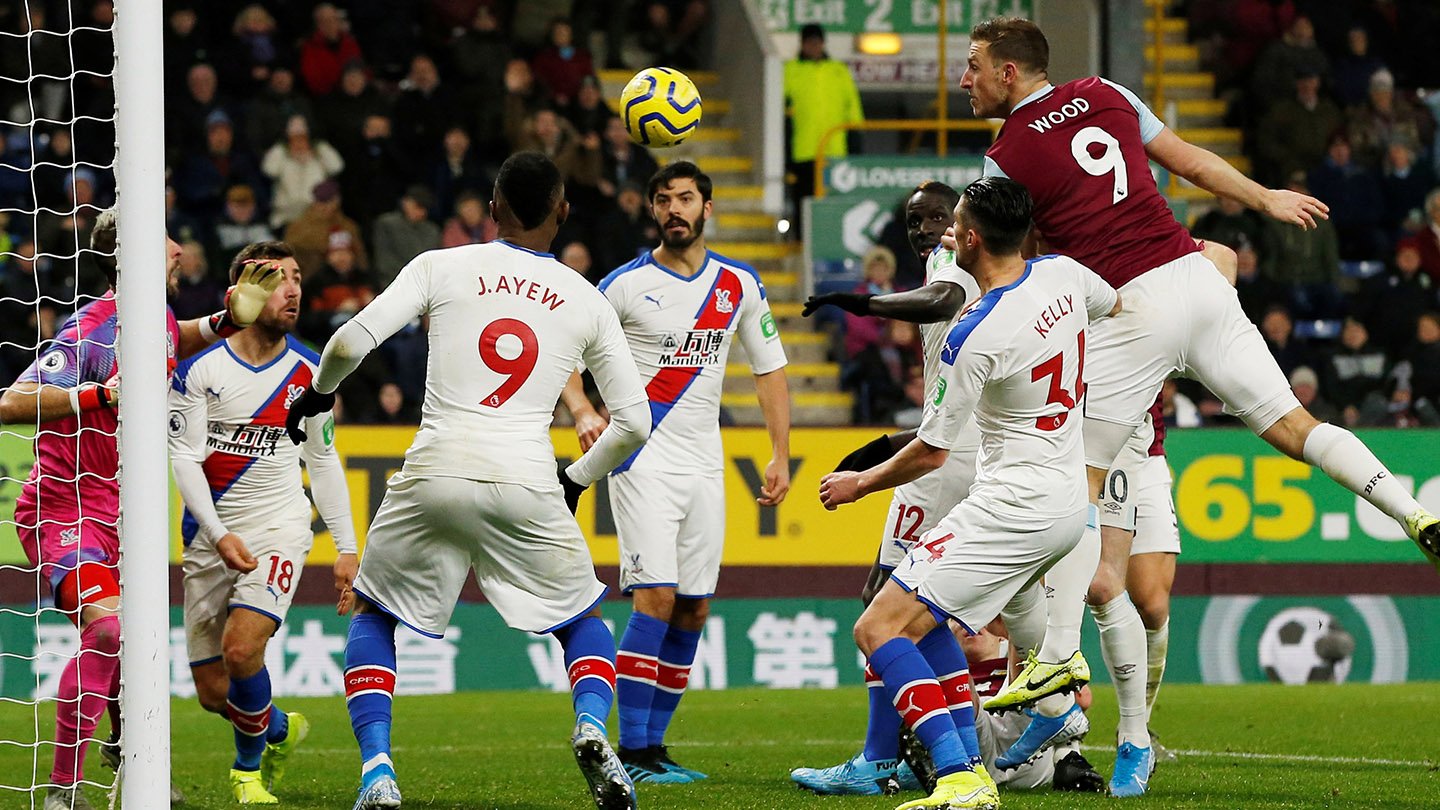 Another injury forced the second substitute of the game, this time for Palace with Scott Dann unable to continue and Mamadou Sakho coming on for his fellow centre-back.

The game was a physical battle, mainly in the middle of the park, with both managers making further substitutions as they looked to score what would be the next vital goal. Dyche swapping Ashley Barnes for Jay Rodriguez, with Hodgson subbing off Townsend for Jeffrey Schlupp.

But the Clarets couldn’t find a way through a resolute and impressive Palace side and it was Hodgson's tactical tweaks that made the difference. Schlupp picked up a loose ball from an awful Mee defensive error, controlled superbly, and then fired low and hard past Pope - with 10 minutes remaining Hodgson’s side had made the points safe. 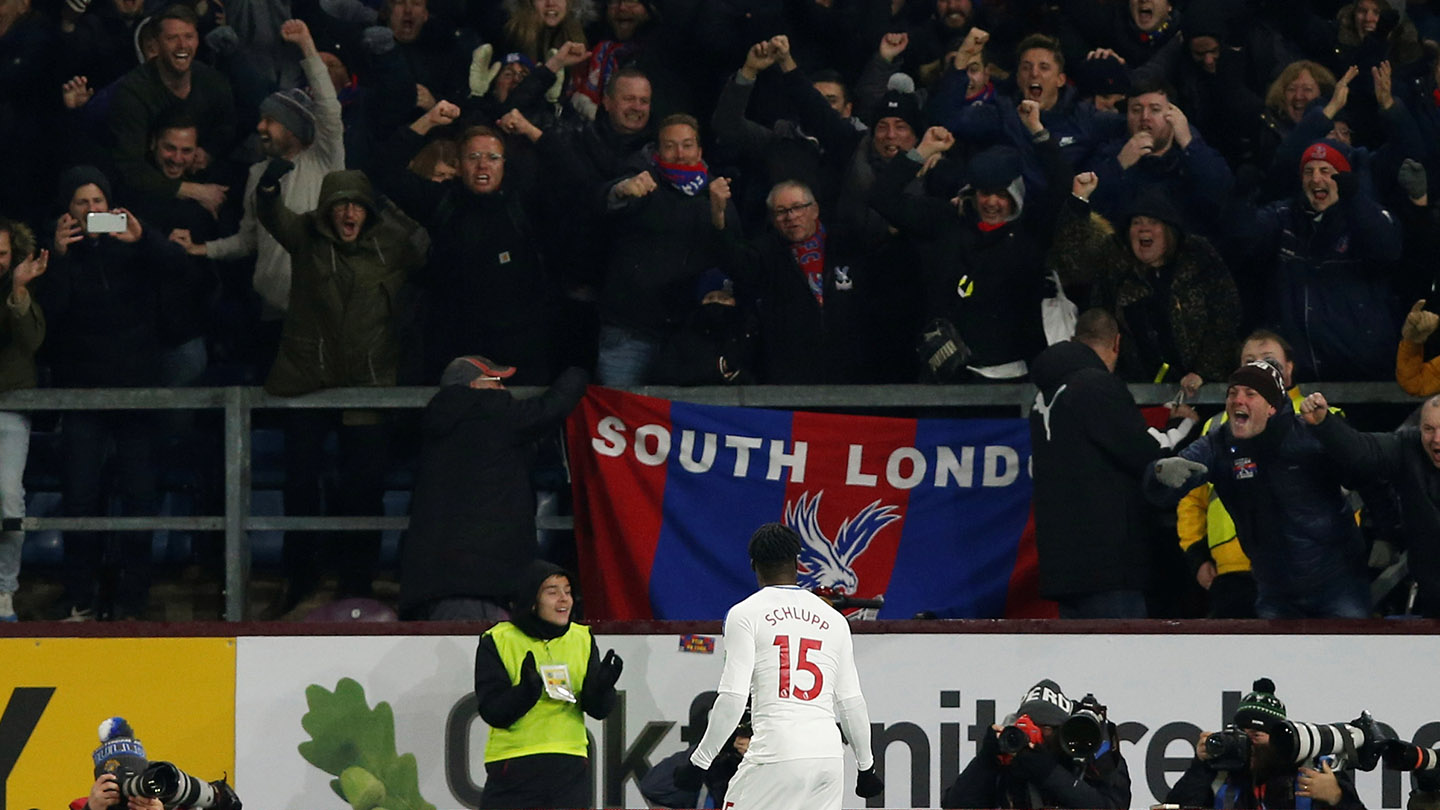 With one corner of Turf Moor bouncing, the Eagles continued to soak up the Burnley pressure, and any late fight back from the Clarets was thwarted by Guaita with two incredible saves in quick succession. Firstly, the 'keeper stood firm from a McNeil effort and then a minute later the Spaniard pulled off a miraculous save from a Rodriguez header that didn't seem possible.

An impressive win on the road for the south Londoners to close out November with a great performance and three points ahead of the busy upcoming Christmas period.

The Black Friday sales are still going on all weekend! Click the banner below to explore the various deals around the club shop!