Roy Hodgson's side can feel disappointed with this afternoon's 1-0 defeat at the hands of Newcastle United, with the Eagles dominating the 90 minutes at St James' Park. 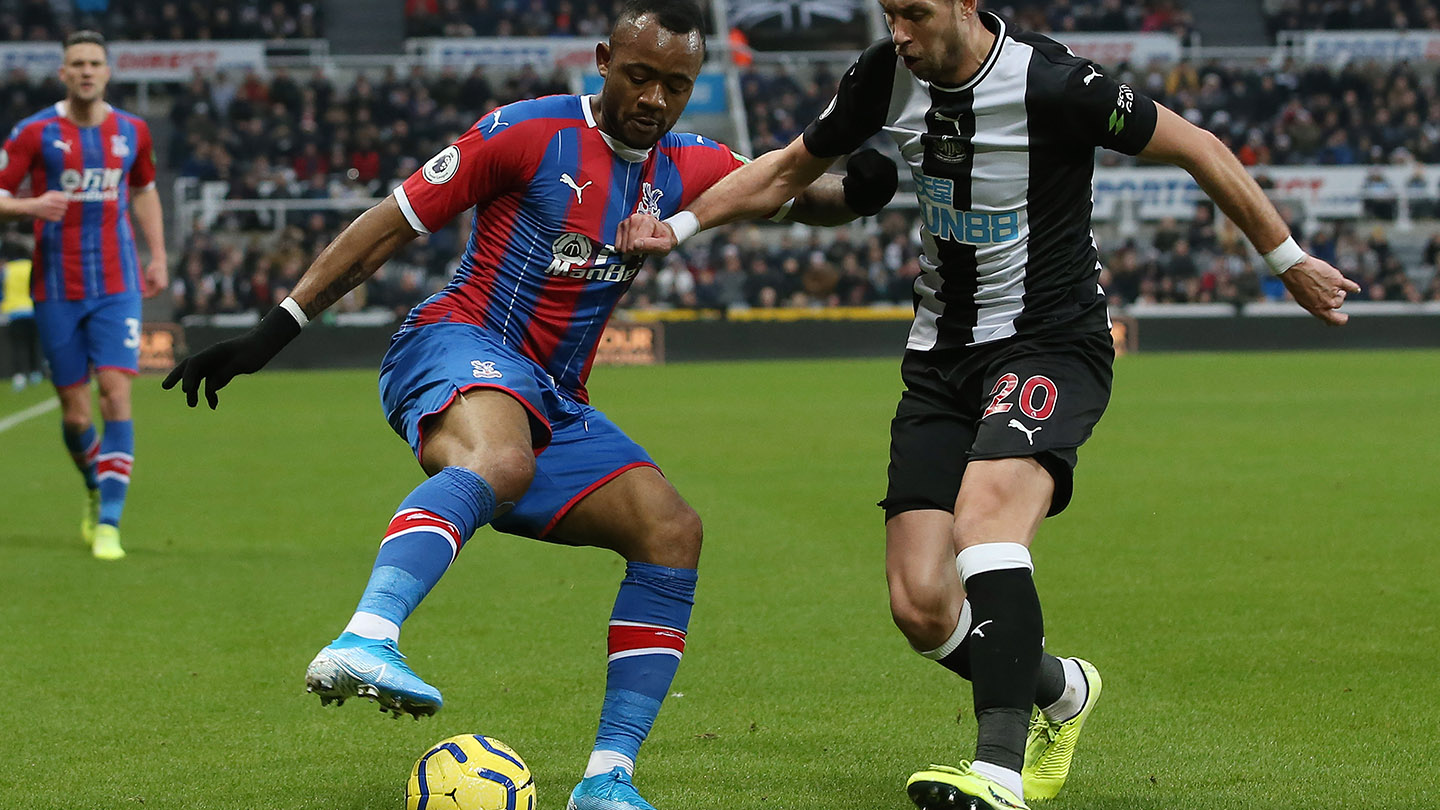 Crystal Palace started like the home team at St James’ Park with the opening five minutes seeing the Eagles dominate possession in the middle of the park - Jordan Ayew and Christian Benteke’s hold-up play particularly impressive and noticeable.

Despite controlling the start of the game, it was in fact Newcastle United that came closest to scoring in the opening few minutes: Jonjo Shelvey finding his way in to the game with several pinpoint passes and deft control and touches eventually resulted in Isaac Hayden going clean through on six minutes.

Just as the majority of St James’ Park rose in expectation, with Hayden looking like he had rounded Guaita, Mother Nature was on Palace’s side with the wet conditions resulting in the Magpies midfielder slipping just as he looked to slot in to a more or less open goal.

The first-half was falling in to a pattern: Palace dictacting the tempo but Newcastle having the opportunities in front of goal. Steve Bruce’s side’s next chance arrived in the 14th minute when Miguel Almirón bundled his way past Martin Kelly just inside the box but the Paraguayan’s curled effort was easily held by Guaita. 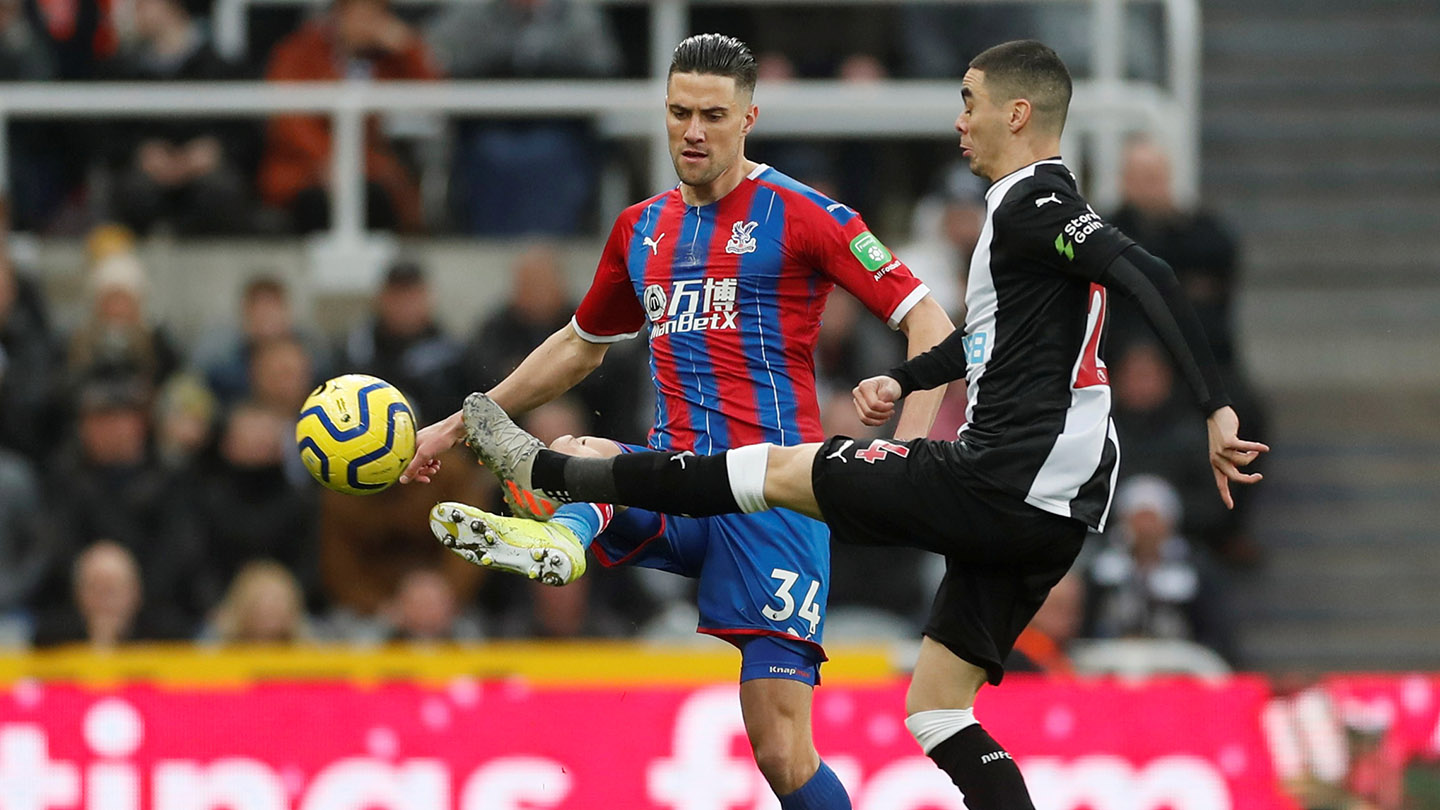 The flow of the game didn’t look like it was going to alter in the first-half with Newcastle’s next strike on target arriving in the 24th minute following further Palace possession – a speculative 25-yarder from Florian Lejeune testing Guaita due to the wet conditions rather than the fierceness of the strike.

Palace’s first chance of the game arrived a third in to the game, with an inviting cross from Van Aanholt finding the head of Christian Benteke. However, the striker’s header bounced just wide of Martin Dúbravka’s goal. 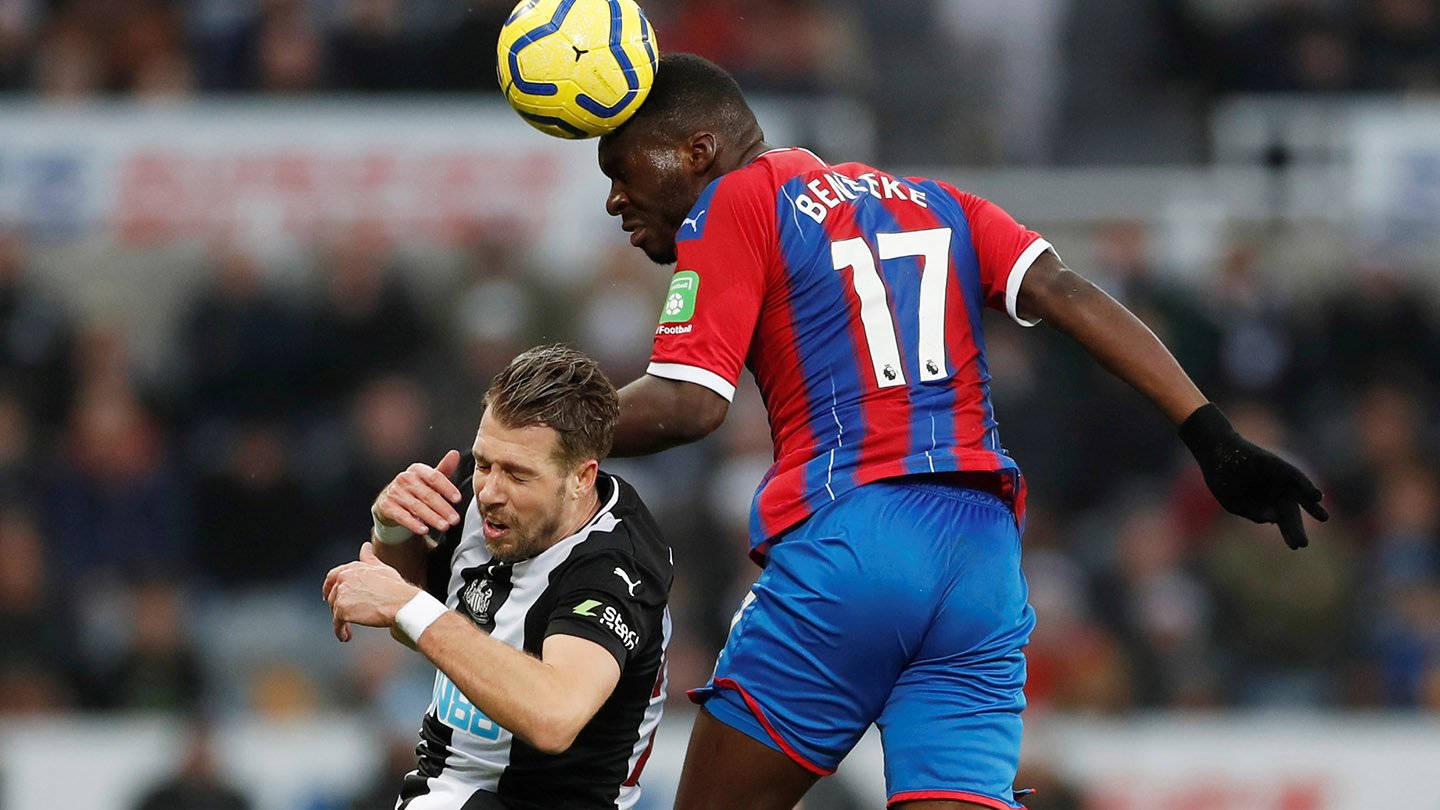 The effort from Benteke provoked further Palace pressure. A well-worked move on the edge of the box between McArthur and Benteke released Zaha inside the right channel of the Magpies’ penalty box. Zaha’s low, hard effort forced a good save from Dúbravka as the Eagles pushed for the opener before half-time. And it so nearly came from the captain Milivojević with a free-kick that looked to have Dúbravka troubled but curled just past the post. 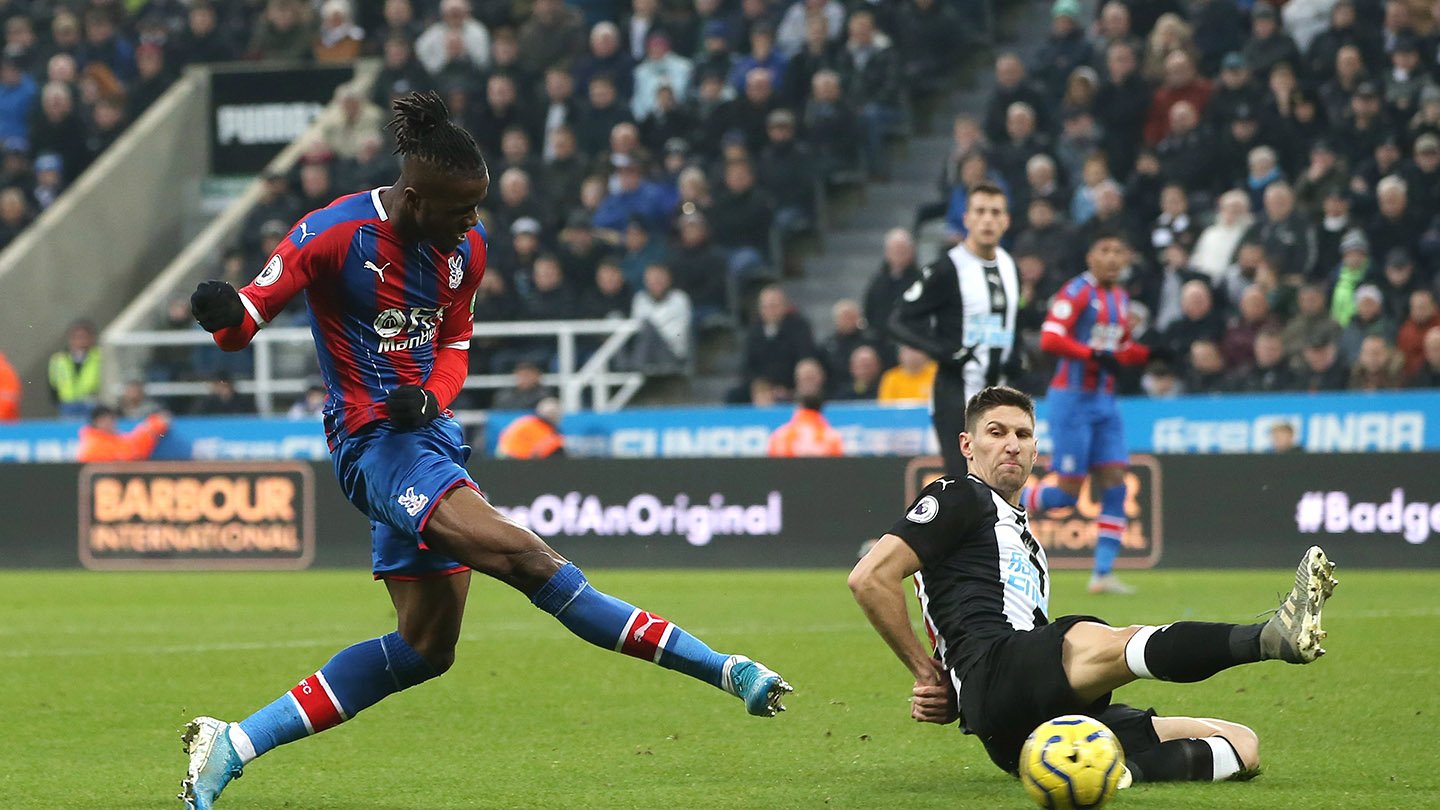 Palace carried on where they ended the first-half, with Van Aanholt cutting the Magpies’ defence apart with an incisive pass through to McArthur. However, the midfielder’s attempted deft chip over Dúbravka clipped the ‘keeper and landed just over the bar.

Palace continued to play intricate, well-controlled football that tended to result in McArthur having an effort on goal. The Scotsman started the next exciting exploit forward: a long-range pass picking out a clever off the ball run from Van Aanholt behind Javier Manquillo. Van Aanholt turned back to find Zaha who created a neat opening for McArthur, however the midfielder was losing his footing just as he looked to fire home and the ball trickled through to Dúbravka. 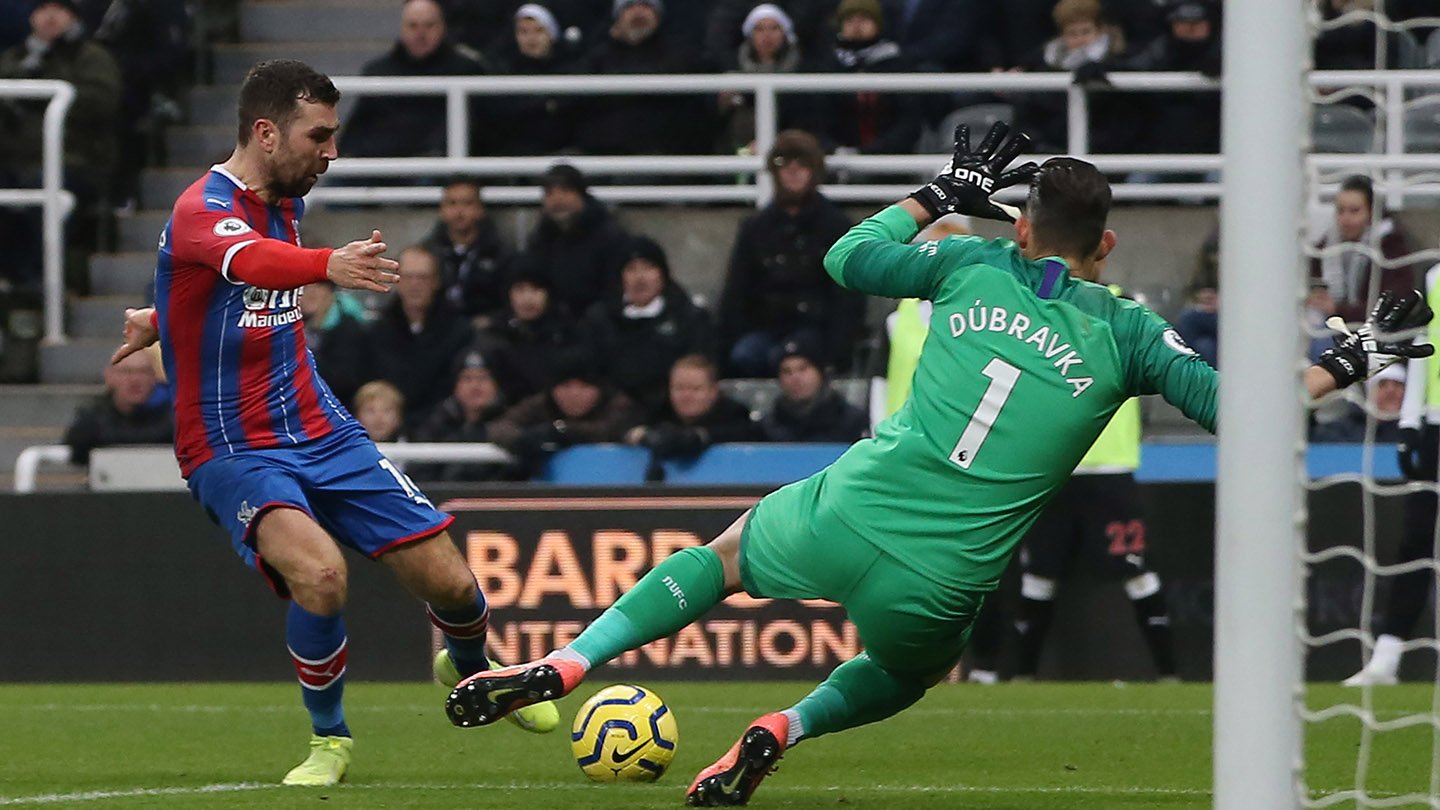 Palace’s continued pressure saw Steve Bruce try to stem the flow of the Eagles by bringing on Sean Longstaff for Hayden on 64 minutes. And three minutes later the personnel change almost paid dividends with Joelinton going through, however, as he has done so often in his Palace career, James Tomkins made an immaculate last-ditch tackle to thwart the danger.

Former Eagle Dwight Gayle entered the fray on 77 minutes for Newcastle as Bruce continued to try and find a way to tip the balance of the game in his Magpies' favour. And six minutes later Geordies had the lead through Almirón, who blasted home from the centre of the box on 83 minutes.

Hodgson responded to going a goal down by bringing on Max Meyer for McArthur, with the German instrumental in earning Palace a point earlier in the week against Brighton & Hove Albion when he entered proceedings. However, it wasn't to be for Palace who return to south London without anything to show for their dominant display.