In an afternoon that saw Crystal Palace go five league games unbeaten in SE25, the Eagles saw a near-secured victory stolen from them in the dying seconds of a close-fought game with 10-man Wolverhampton Wanderers.

Wolves travelled south to face Palace on the back of a 5-2 league defeat to Chelsea, with the Eagles themselves having suffered to the tune of four goals against Tottenham Hotspur last Saturday.

But for two teams who had conceded a combined nine times between them from just two matches, this afternoon’s clash started at a very steady pace. 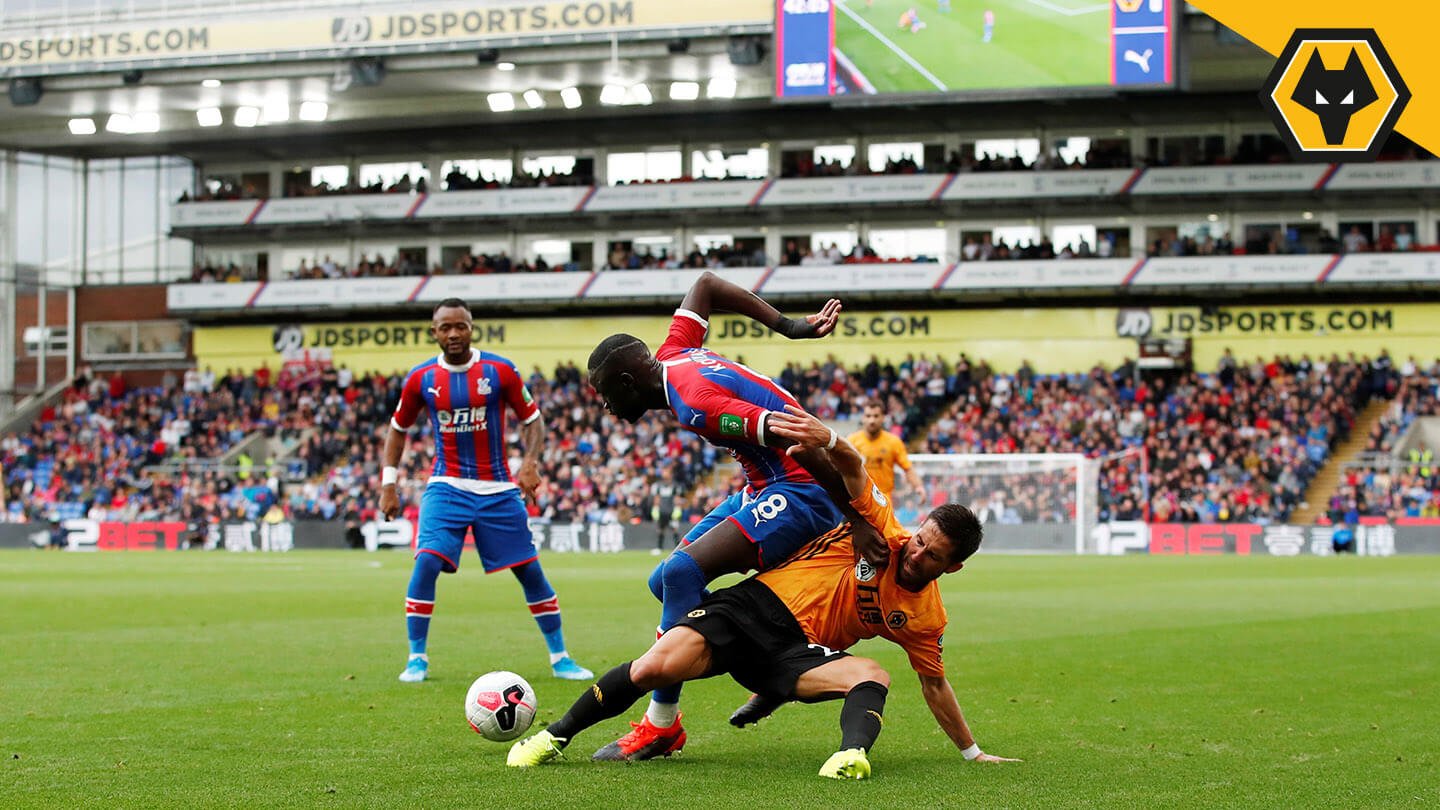 Ten minutes passed with nothing of note filling the time until Dendoncker saw a clear chance fall his way on the end of a deep Joao Moutinho corner.

With the ball bouncing loose in the Palace box, Dendoncker struck-out a leg to stab it home only for McArthur to instinctively block him close to the line.

In a similar situation at the other end of the field 15 minutes later, Dendocker was unable to rise above Jordan Ayew who, looking confident from kick-off, got his head on the end of a Luka Milivojevic corner to steer the ball into the hands of a diving Rui Patricio. 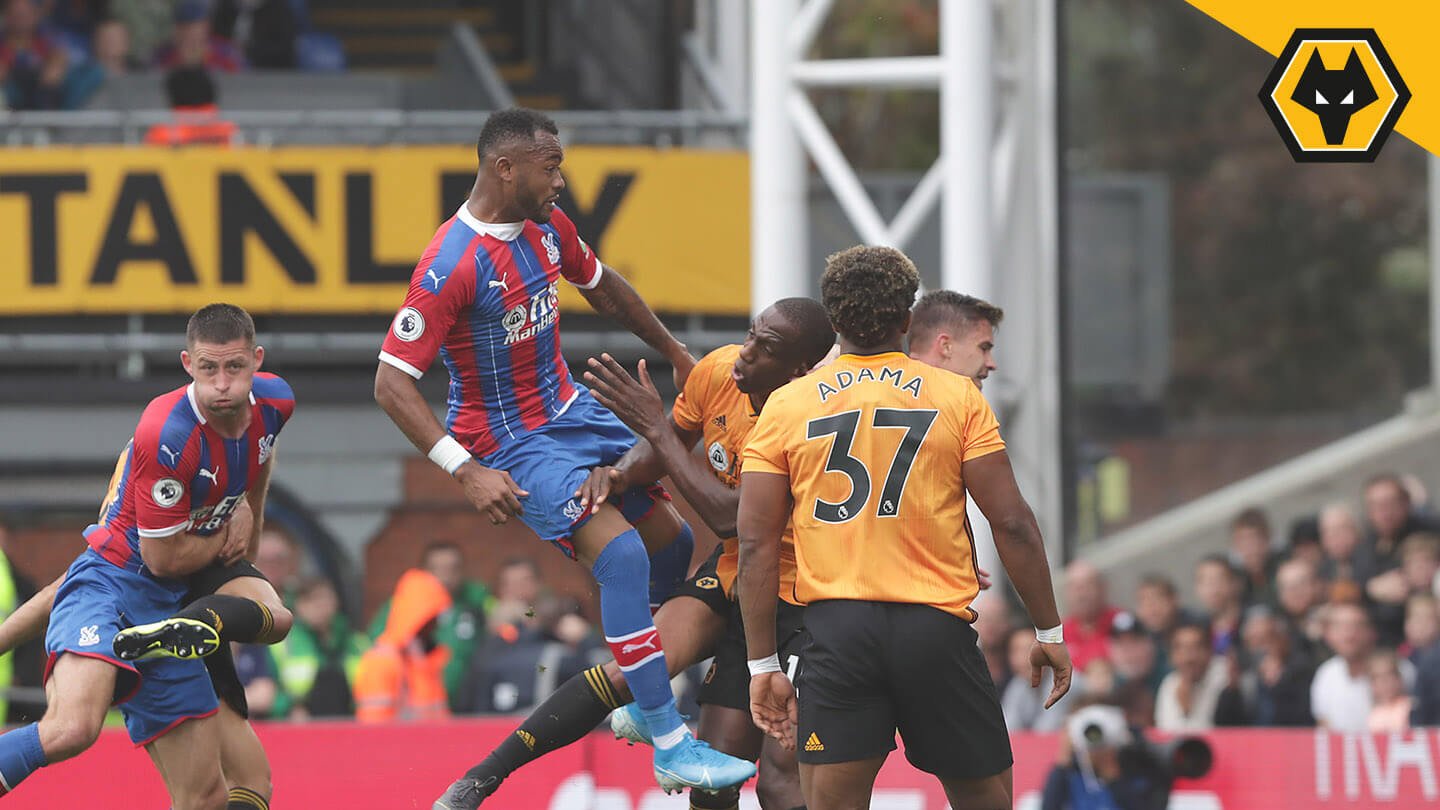 But instead it was the head of Doherty which caused the most concern moments later as he powered himself behind a Raul Jimenez cross barely six yards from Palace’s goal line.

Leaping with split-second reactions, Guaita pulled off a remarkable save to deny the Irish fullback, hitting the turf with relief and entirely to thank for keeping his side level.

Looking to build on the energy naturally sparked by his ‘keeper’s heroics, Zaha burst into the Wolves box before mesmerising Willy Boly on the turn only to run out of space, Patricio deflecting the ball from the Ivorian’s feet and out for a corner. 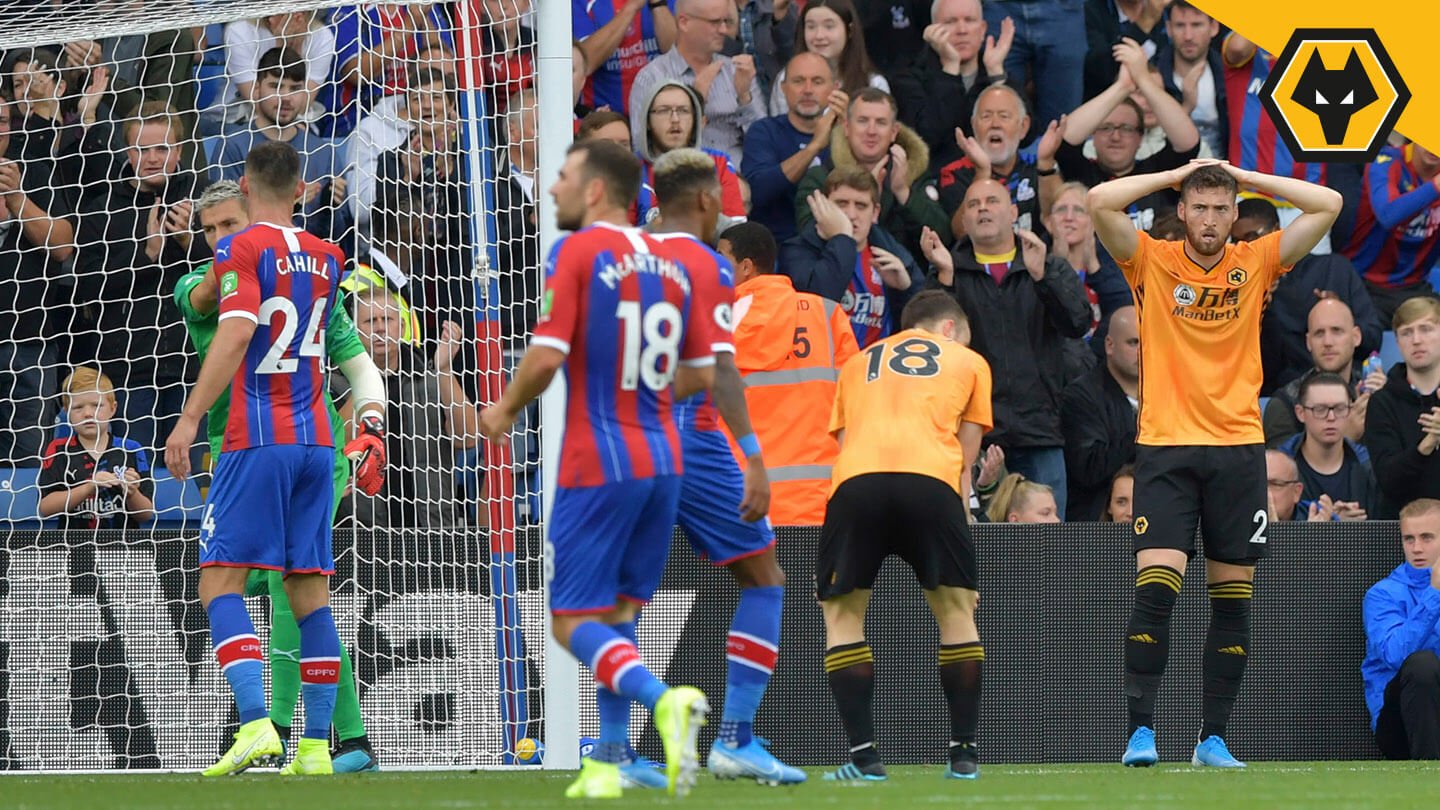 The minute’s action starkly contrasted those which preceded it and a goal seemed imminent for either side. Wolves’ Jota looked closest to claiming it when he swung his right foot at the ball from 18 yards, but his resulting effort was held comfortably by Guaita.

Doherty was next to try his luck but failed to connect with Moutinho’s driven cross, leaving the ball to pass directly into the hands of Guaita.

Kicking off after the half-time break, the Eagles were determined to force their way into the game and did so in emphatic style barely a minute into the second half.

Jeffrey Schlupp stylishly began the charge, working his way along the left-wing before sliding the ball into Wolves’ box. Unable to deal with the assault, the visitors were out of shape when McArthur teed-up the unlikely threat of Ward, who rifled in from 20-yards via a heavy ricochet off Dendoncker. 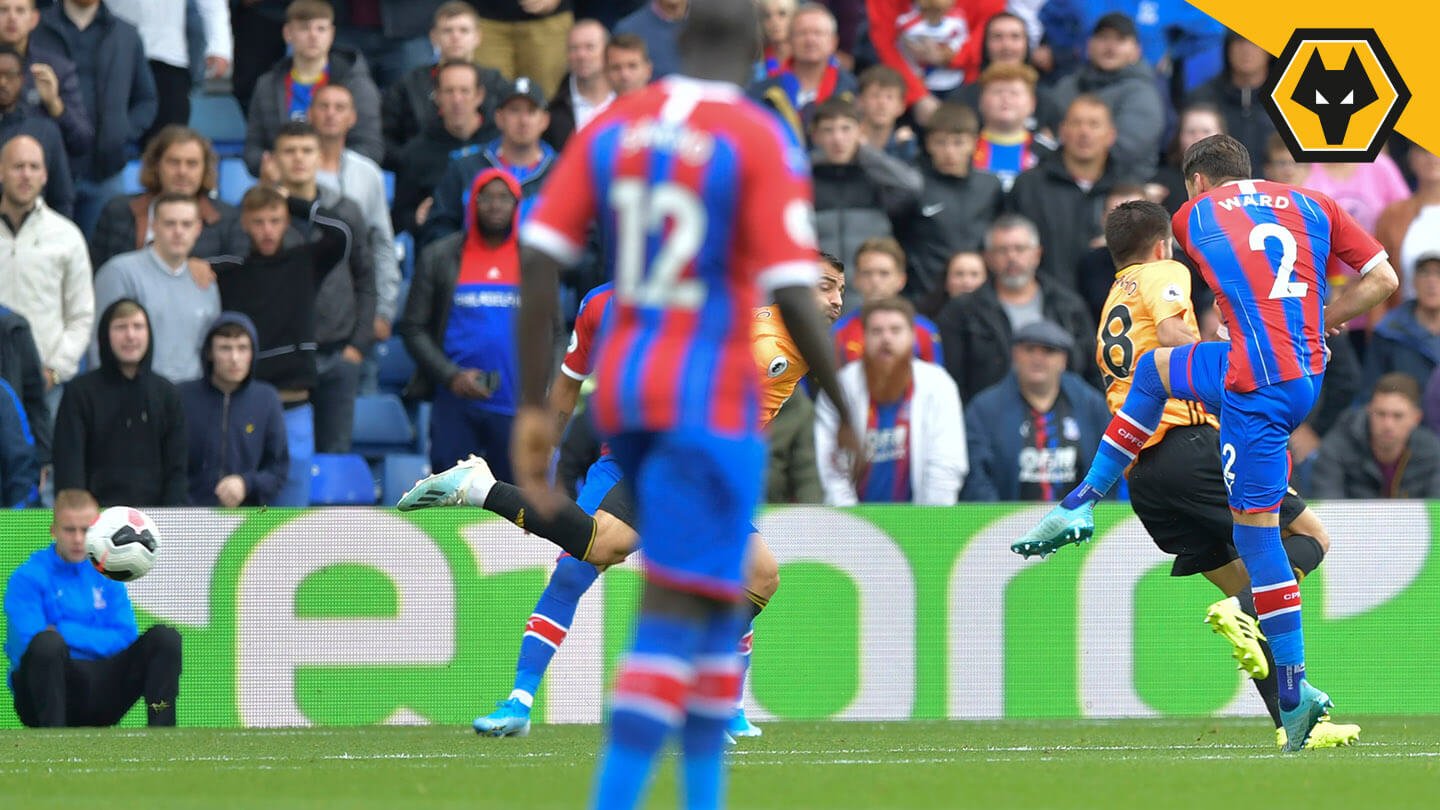 The bulging net and whistle re-starting play saw Palace playing in the ascendancy, enjoying chances through Ayew, Milivojevic and Zaha.

The visitors’ afternoon took a further turn for the worse when Saiss pulled Zaha to the ground, earning his second yellow of the clash and given his marching orders, leaving his teammates both a goal and a man down to push back against Palace in the hope of forcing an equaliser.

The chance to capitalise on Palace’s dominance and shatter any hope of a Wolves comeback fell to substitute Christian Benteke, played in by Schlupp and under pressure in the penalty area. Shaping up to shoot, the Belgium international was denied by the firm palms of Patricio, who beat his effort away assuredly. 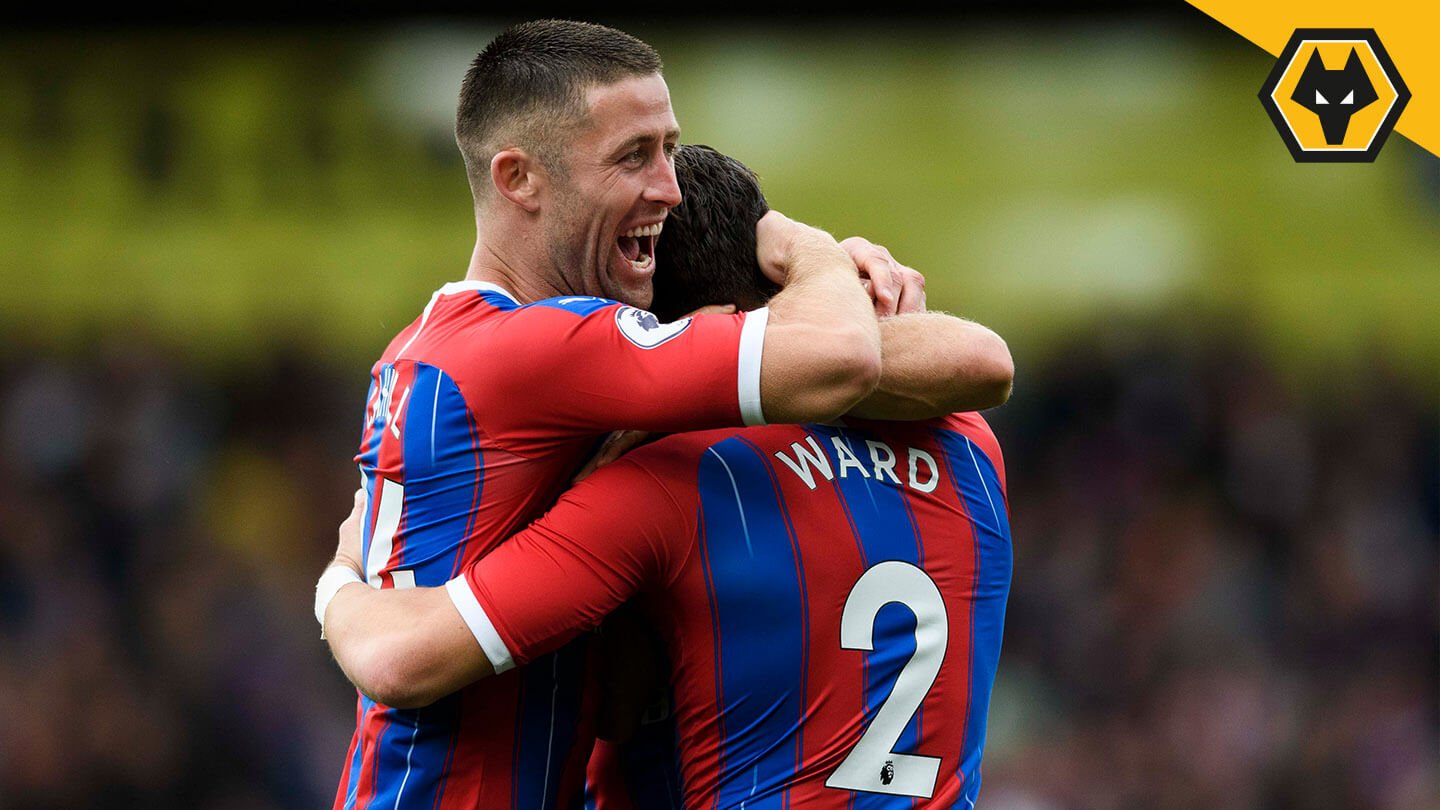 Facing 10 men for the third home match in a row, Palace continued to force the visitors backwards but found themselves under pressure in a well-matched close to the day.

With just minutes left ticking down through extra time, the Eagles had one last chance to bury the game when Schlupp struck one-on-one against Patricio. Saving the effort, the Portuguese 'keeper was forced to watch as Patrick van Aanholt and Benteke sought to net Palace's second but their attempts were to no avail.

Palace were punished in the cruellest of fashions for their profligacy when Wolves burst to the home side's end of the pitch and fired home with seconds remaining through Jota, the full-time whistle following that which signalled the goal almost immediately.

Watch full post-match reaction and free highlights of tonight's clash now on Palace TV. Head over either by clicking here or 'Palace TV' in the official Palace app.