Late drama saw Palace fall to a 2-1 defeat to Bournemouth after a controversial penalty award allowed Junior Stanislas to net the winner four minutes from time.

The Eagles had clawed their way back into the game following David Brooks’ early opener thanks to a fine strike by Patrick van Aanholt 10 minutes into the second half, and looked on course to potentially win the game before Mike Dean handed the Cherries a penalty after a tussle between Jefferson Lerma and Mamadou Sakho, which Stanislas netted to defeat the Eagles.

Bournemouth began sharply with some intricate passing and good off-the-ball running, and it took just four minutes for their fans to celebrate. Adam Smith nudged his way down the left wing and slid a low cross into the area for Callum Wilson to hold up, and the striker laid it off into the path of Brooks for the Welshman to fire first-time into the top corner via the bar, leaving his international teammate Wayne Hennessey grasping thin air. 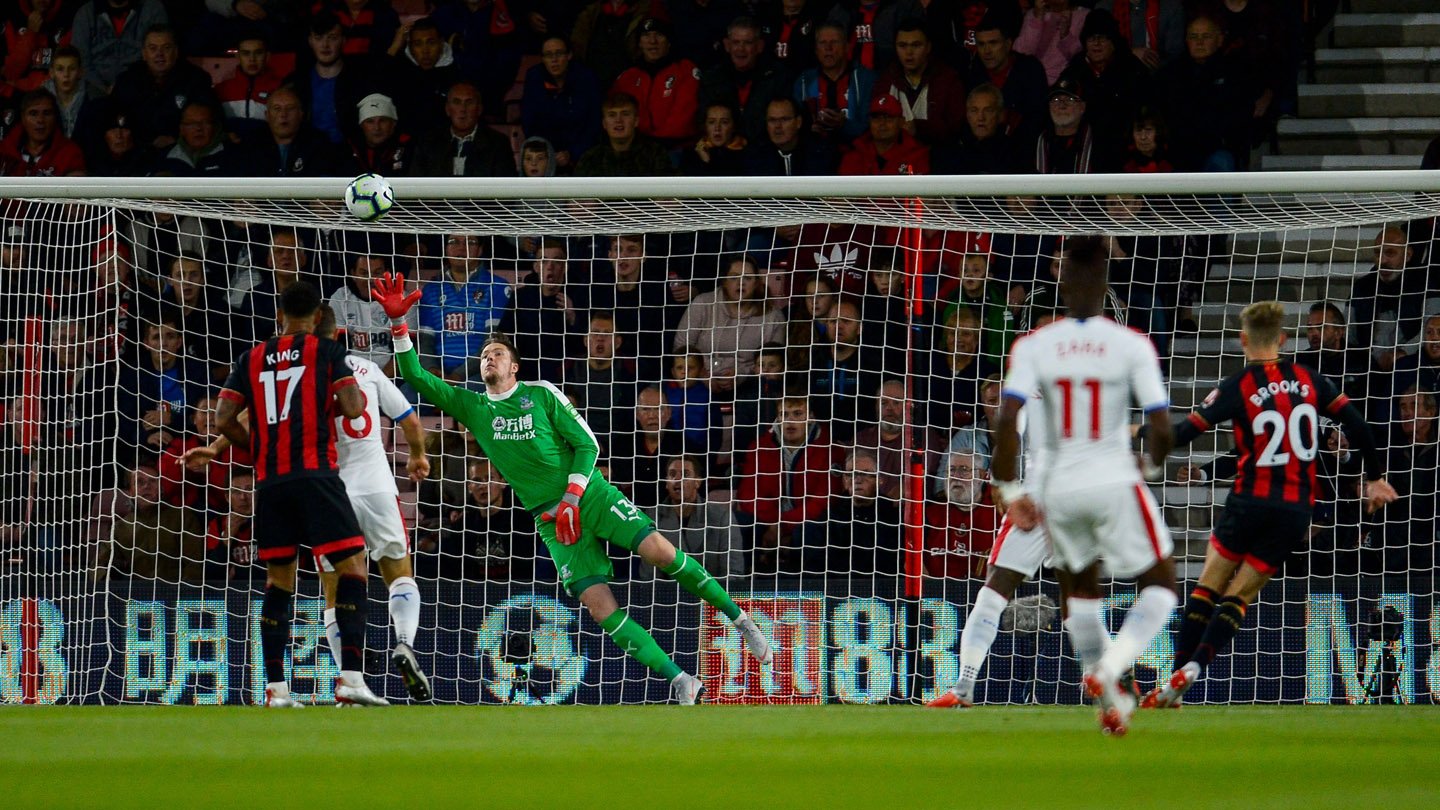 In response, Palace quickly found their way down the other end and Luka Milivojevic saw a goalbound free-kick take a vital deflection off the Cherries’ wall, before Max Meyer nearly marked his first Premier League start with a goal thanks to a drive from 25 yards which forced Asmir Begovic to hit the turf to save.

Throughout the opening 45 Eddie Howe’s team looked quick and comfortable in possession and they nearly added a second when Ryan Fraser whipped a free-kick into the box for Steve Cook to attack but his header was straight at Hennessey, but as the half edged towards its conclusion the Eagles began to show some neat football of their own to create an exciting end-to-end affair, but the only chance they could muster was a wild long-ranger from Jordan Ayew which flew well off target. 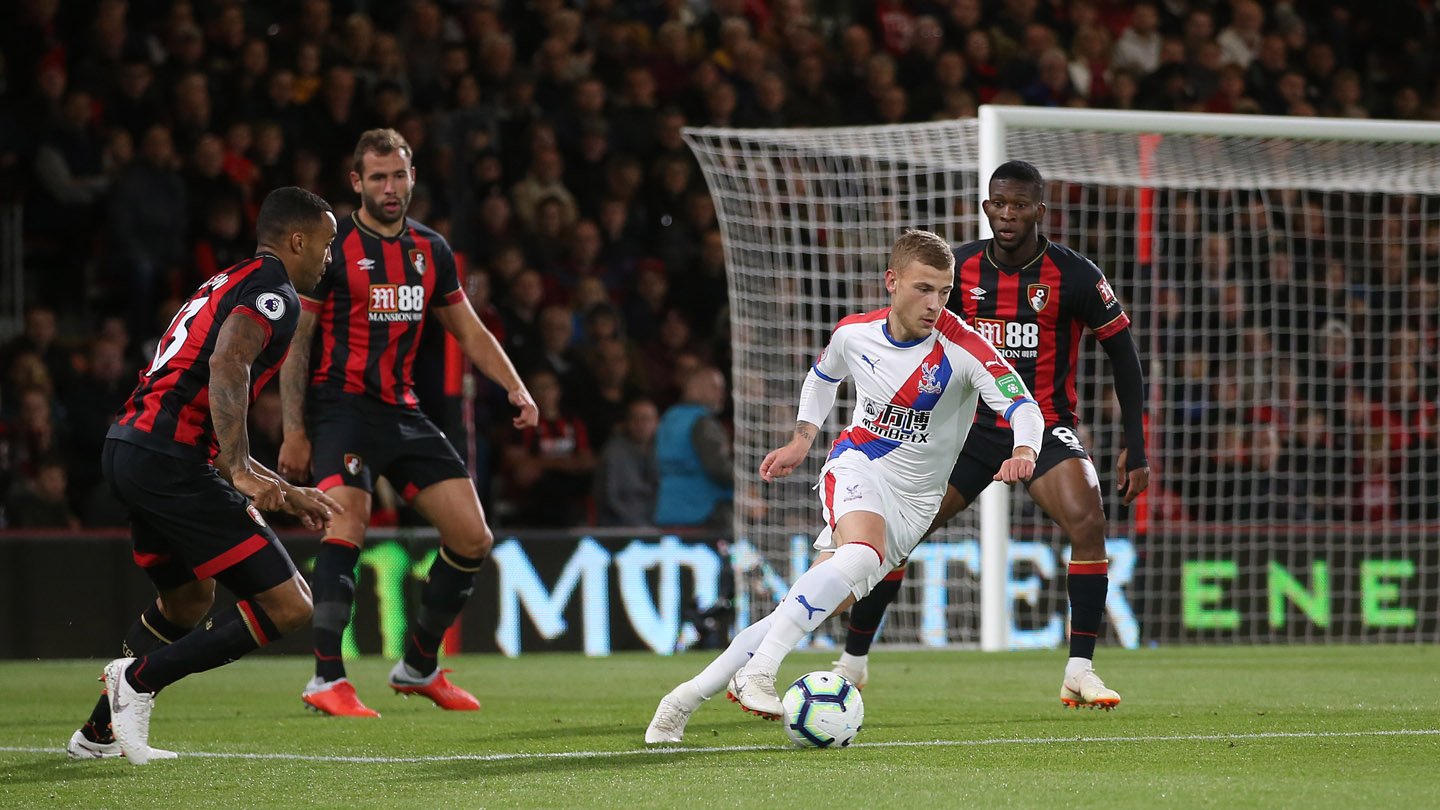 But after play restarted that began to chance, and not long after kick-off James McArthur suffered the same fate when his first-time blast failed to trouble Begovic, however it was a sign of Palace’s ever-growing confidence and their positivity was rewarded on 55 minutes they grabbed a deserved equaliser.

Van Aanholt picked the ball out of the air and squared it to Wilfried Zaha, who had escaped the clutches of the Bournemouth defence for the first time all night. He was fortunate to see a pass inadvertently ricochet off Meyer and spin back into his path, but he then proceeded to stroke the ball into the Dutchman’s path to control and fire high into the Cherries net to score in consecutive games. 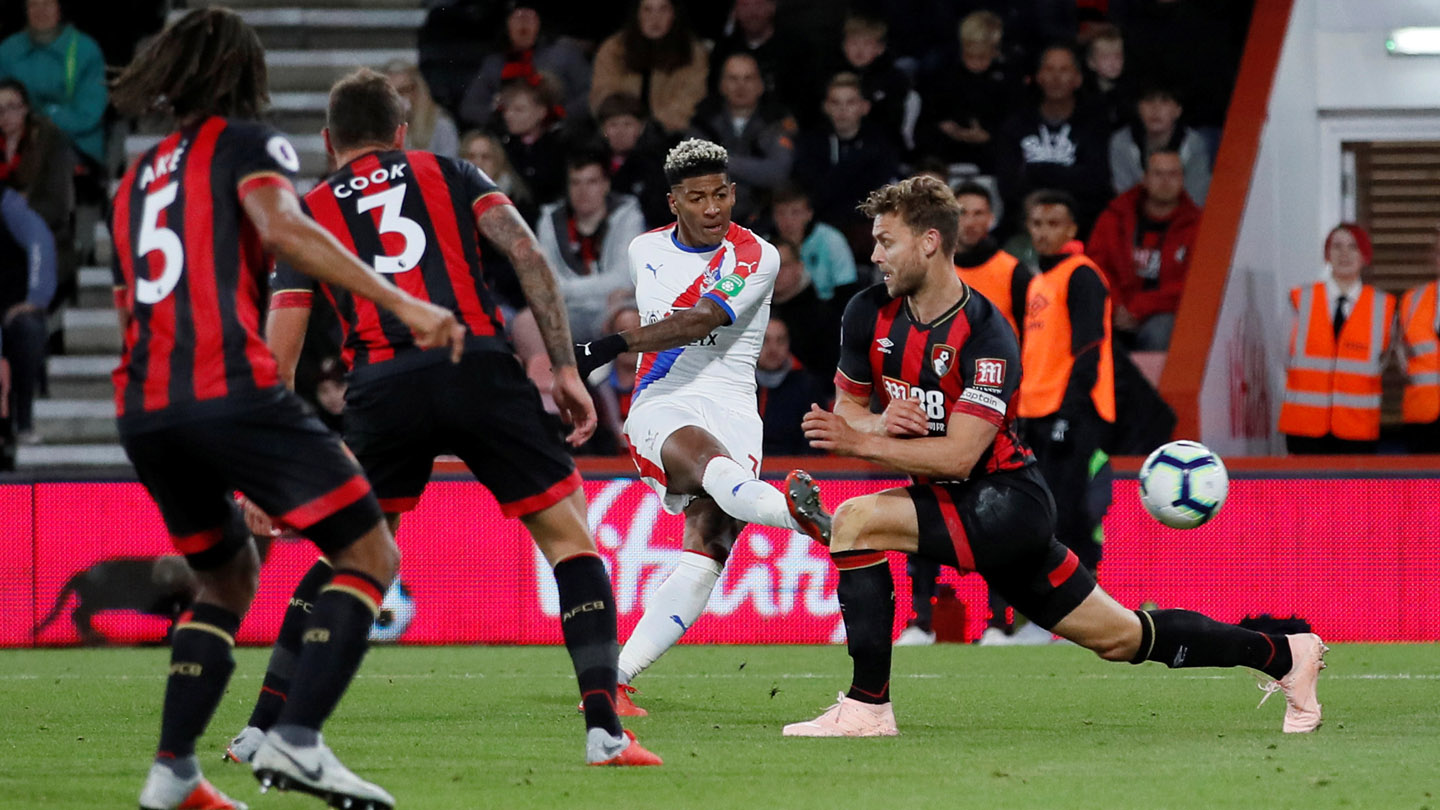 While the scoreline may have shown the sides level, Palace were in the ascendency and Andros Townsend fired just wide 10 minutes later, but there was a real scare for Roy Hodgson’s team with eight minutes remaining when a miscontrol by Van Aanholt allowed the speedy Fraser to seized possession, nutmeg Sakho and race goalwards before unselfishly putting Wilson one-one-one with Hennessey, but the Palace stopper stayed big and made a good save with his legs. 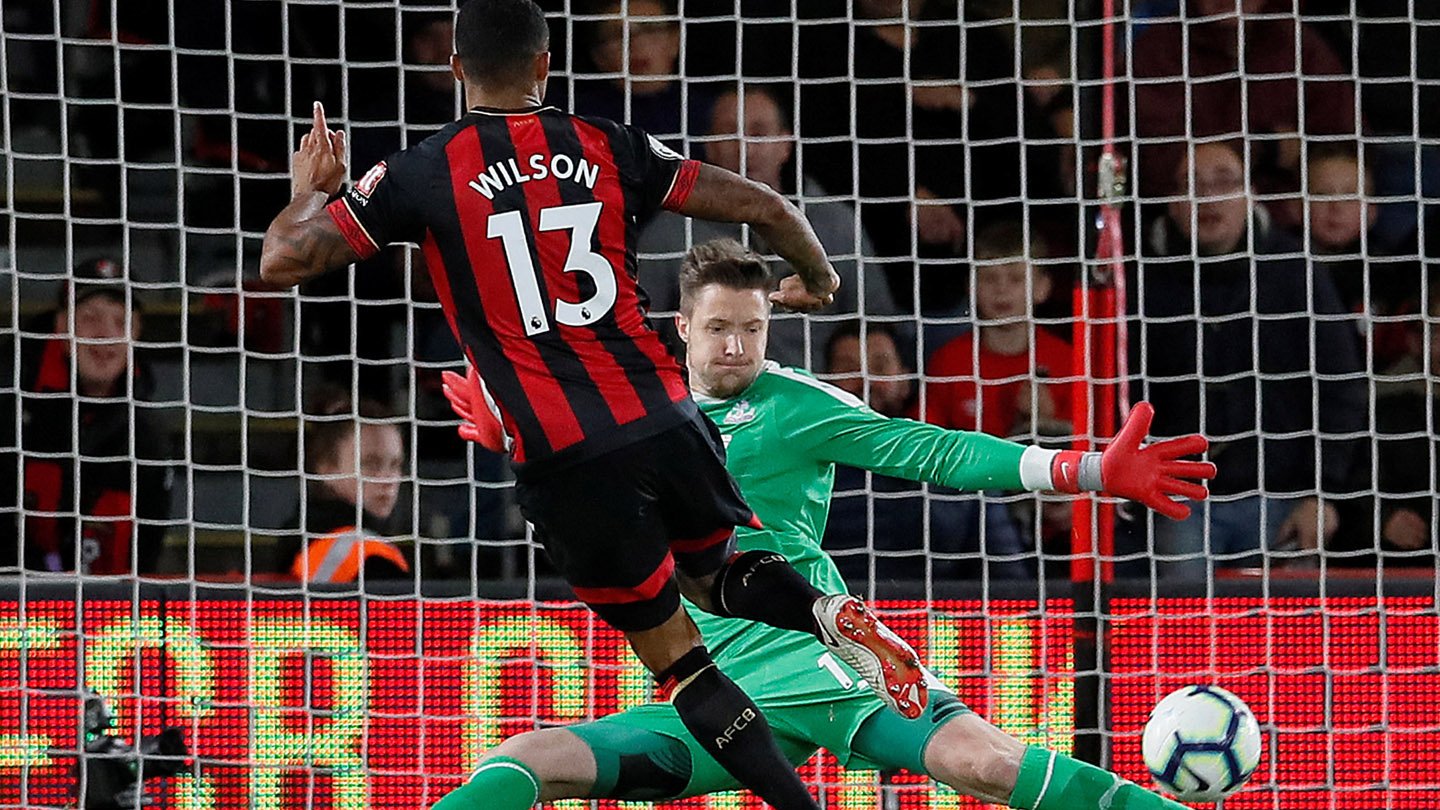 Two minutes later, the keeper once again kept his team level when he produced another top stop to prevent Dan Gosling netting with a diving header, however with four minutes came the controversy which saw Palace’s point, and the chance of seizing a late win, slip from their grasp.

Bournemouth sent in a free-kick from the right and amongst the jostling inside the box, Lerma went and Dean pointed to spot, deeming that Sakho had elbowed the midfielder in the face. Replays showed it looked unintentional, but regardless minutes after arriving as a substitute Stanislas stepped up and tucked the penalty down the middle to snatch victory for the Cherries. 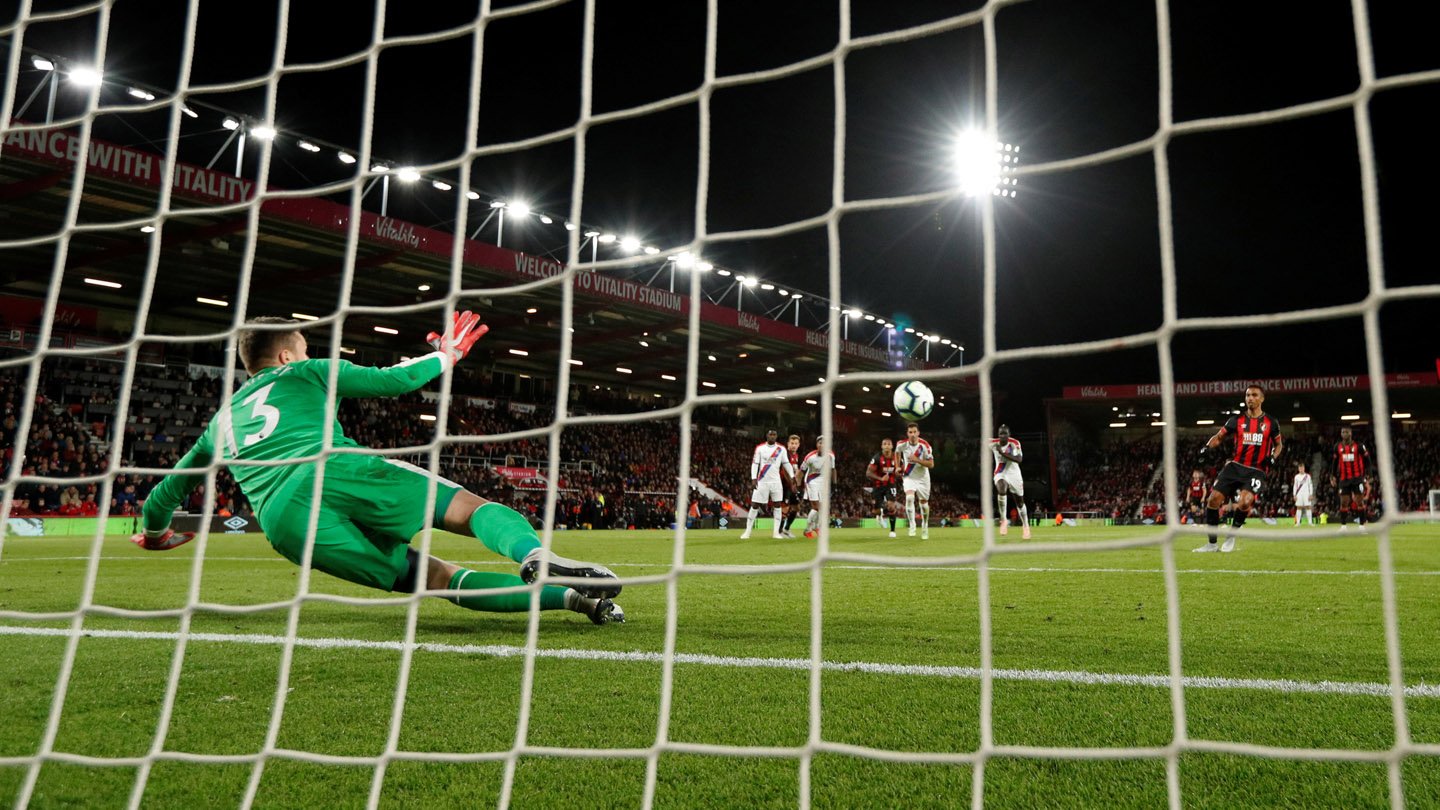