After five minutes in which each side tested one another with matching approaches - sitting deep, looking to pass their way around the opposition before making a swift transition forward - a chance apiece fell within the same minute.

The first saw Brighton’s Neal Maupay strike wide on the turn before Christian Benteke, running on to a lofted James McArthur through-ball, also hit wide of goal from a similar position.

But the first chance clear enough to cause a unified intake of coastal air came via Cheikhou Kouyate, who, latching on to a Benteke knock-down, found the ball caught under his feet within the grasp of goalkeeper Mat Ryan. The shot stopper promptly dispossessed Kouyate to nullify a briefly promising opportunity. 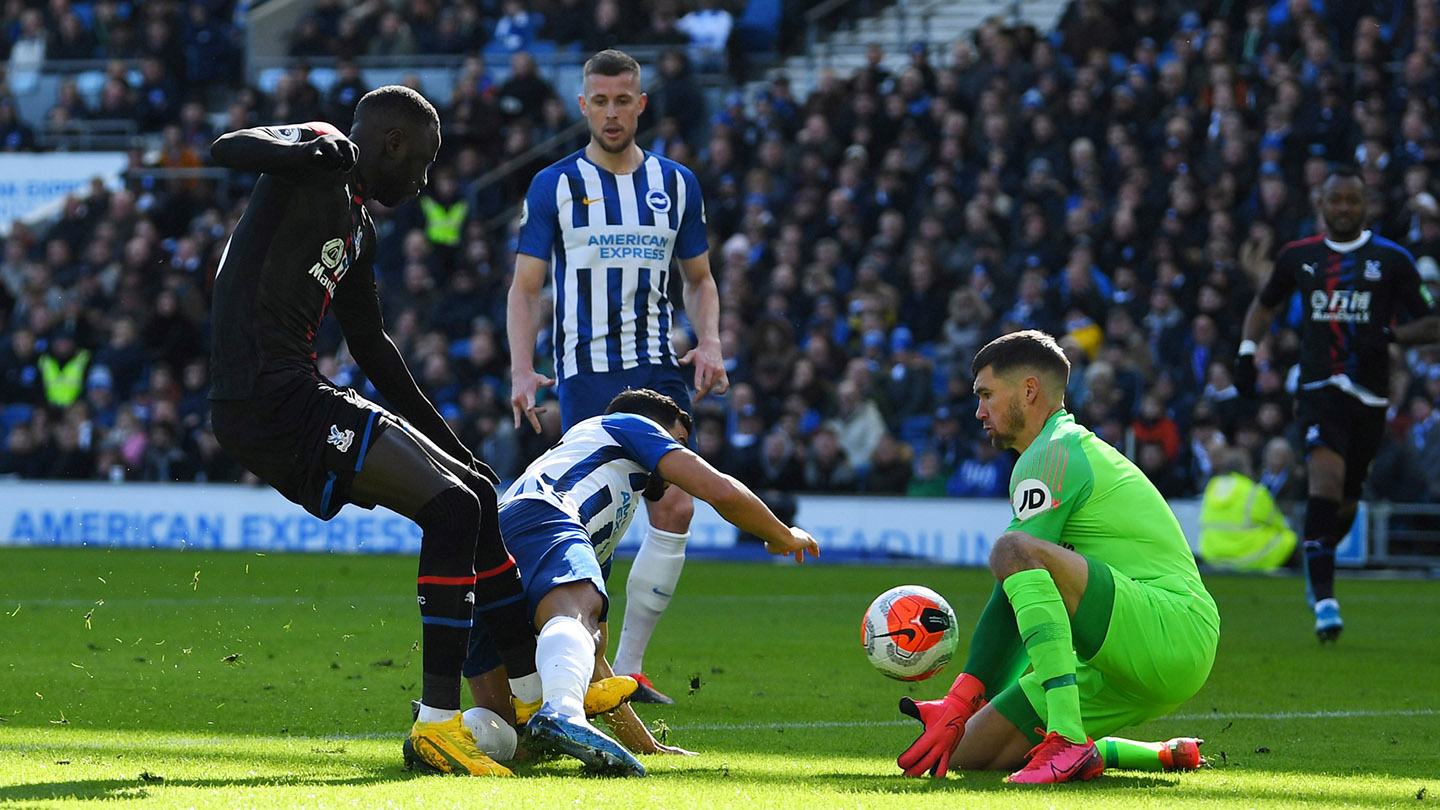 At the other end of the pitch, Vicente Guaita was called into action for the first time to block Maupay’s near-post effort and, from the resulting corner, Scott Dann launched a Lewis Dunk header to eventual safety as Guaita caught the tame returning shot from Davy Propper.

Brighton were enjoying a spell of dominance which the Eagles staved off and, after Ezequiel Schelotto - a substitute - found himself booked, the game settled down to its more even origins. 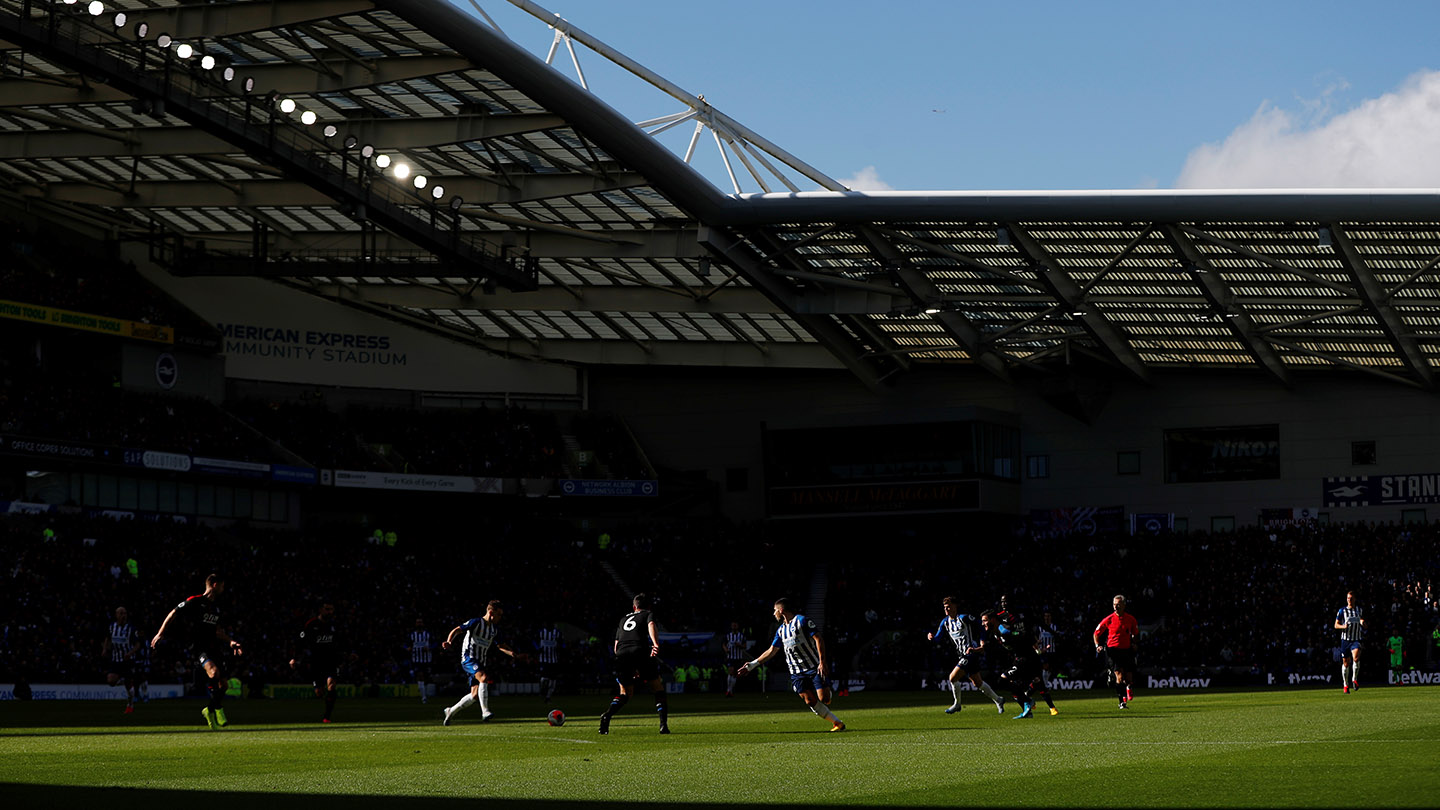 Guaita caught efforts from Solly March and Maupay before the Seagulls broke with pace towards the visiting south Londoners. Striking a ball three yards from the goal-line, March somehow managed to turn wide and behind as the score remained level.

The Eagles were very much in the game, however, being similarly frustrated from close range when Gary Cahill headed off the ground and over the bar as he leapt towards a James McCarthy corner. 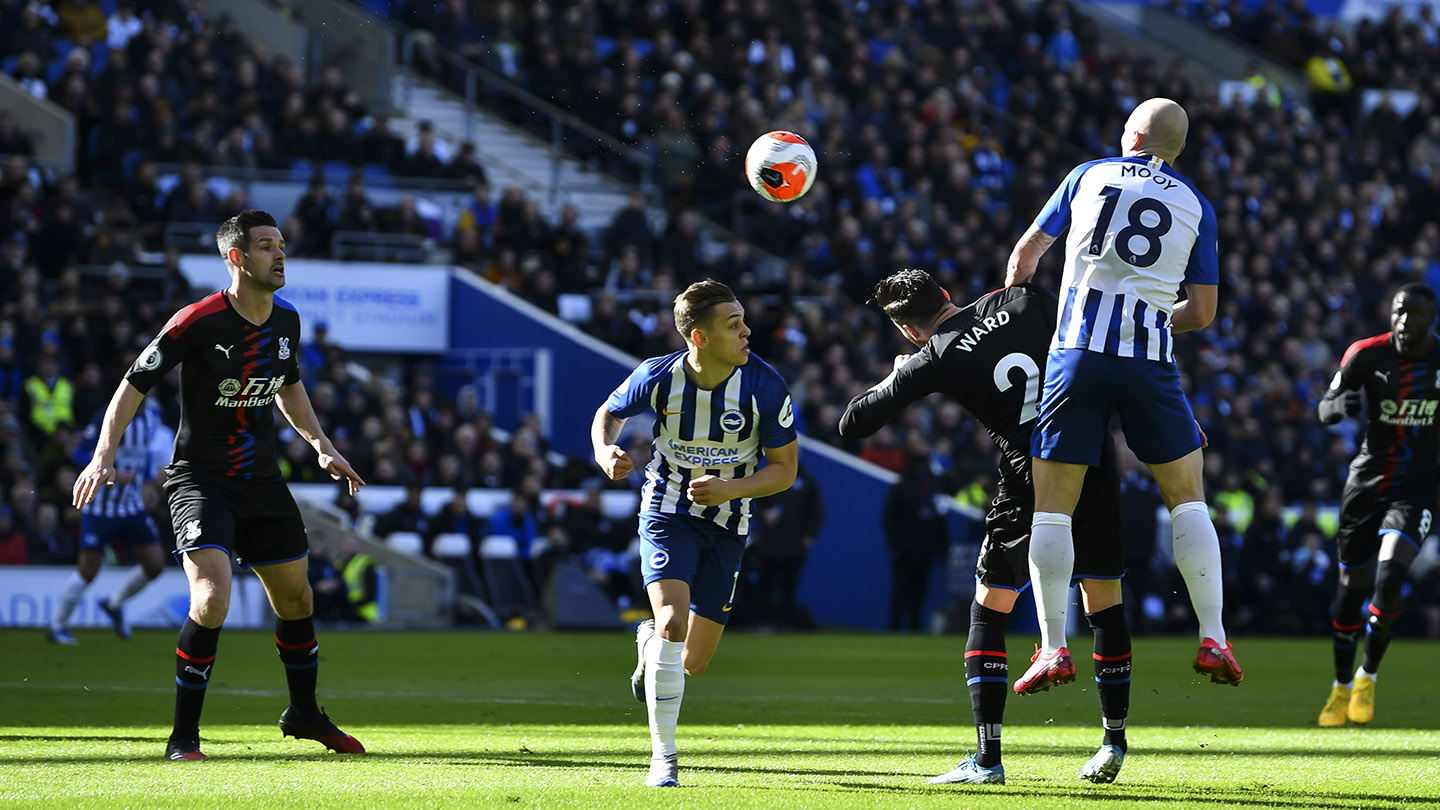 At half-time, Palace could reflect on 45 minutes of heavily swinging dominance, with a strong spell for Brighton meaning each side could boast of spells in the ascendancy.

Brighton appeared energised for the start of the second-half, but were denied at their first attempt by Maupay - who stood offside regardless - blocking Dunk’s goal-bound header.

Later, Leandro Trossard lost possession in the box before curling inches wide a few minutes after.

The Seagulls’ unnerving profligacy continued to see them squander chances, but Graham Potter’s men appeared ever closer to pulling into the lead. Maupay again tried his luck against Guaita but, volleying from 12 yards, the French midfielder fired straight into the waiting arms of Palace’s No.31. 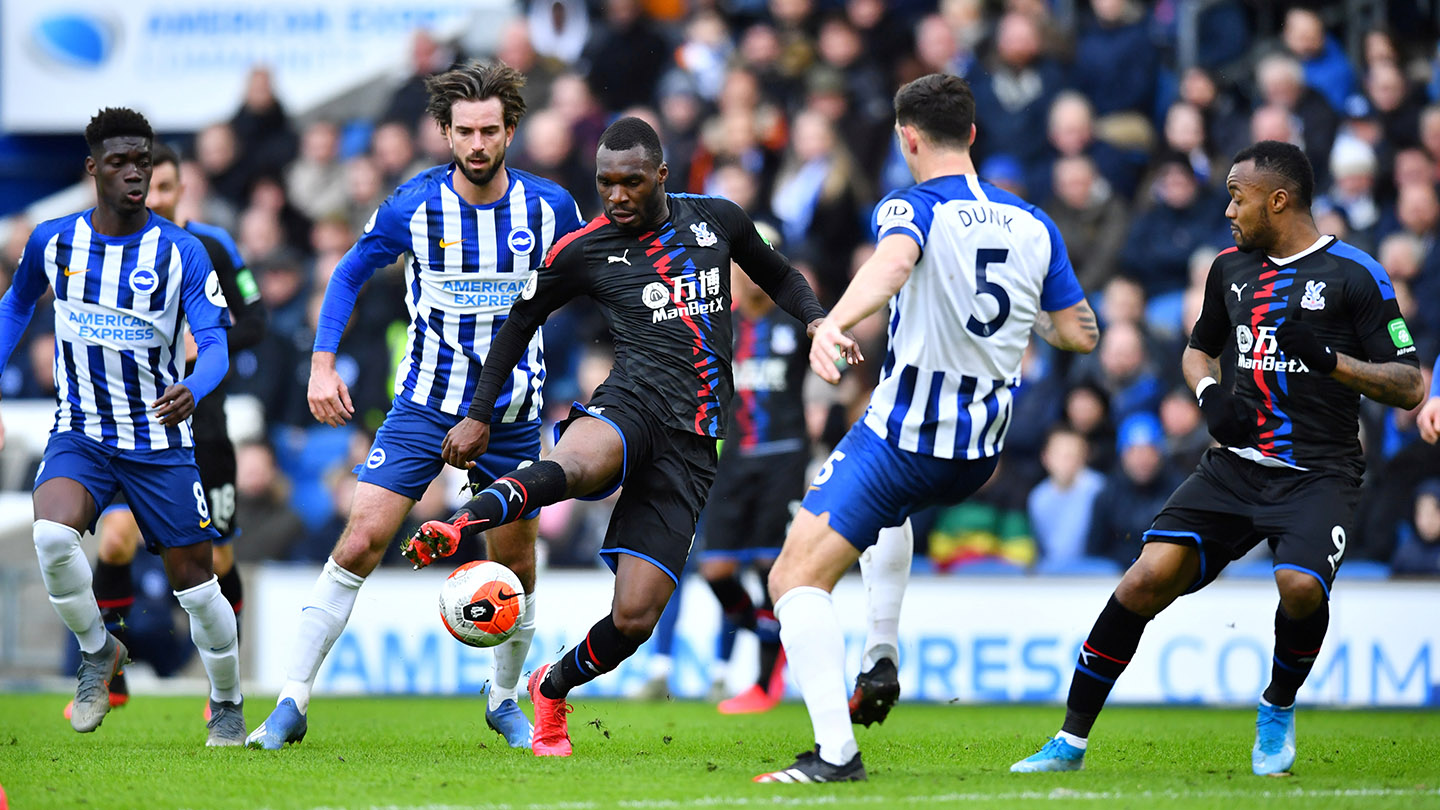 Pushing towards their own fans and regaining their foothold in the game, Palace enjoyed two chances - with both coming from Patrick van Aanholt’s deadball deliveries. The first - a free-kick from 40 yards - saw the home defence turn just behind as Benteke raced to meet the ball and the second saw the Belgian frontman head wide from the resulting corner.

Benteke was involved at the heart of the action again minutes later, as the play ticked from end to end with authority regularly exchanging hands. This time, the No.17 intercepted a weak backpass and tried to fire past Ryan, but the Brighton ‘keeper had advanced too far forward and blocked the shot at close quarters.

Despite his persistent involvement, Benteke was not the man on the turf this afternoon whose name arose most frequently, and Neal Maupay against Vicente Guaita prevailed as the game’s most tested battle. Again, the Frenchman struck at the Spainaird’s near-post but, again, it was the man in green who won. 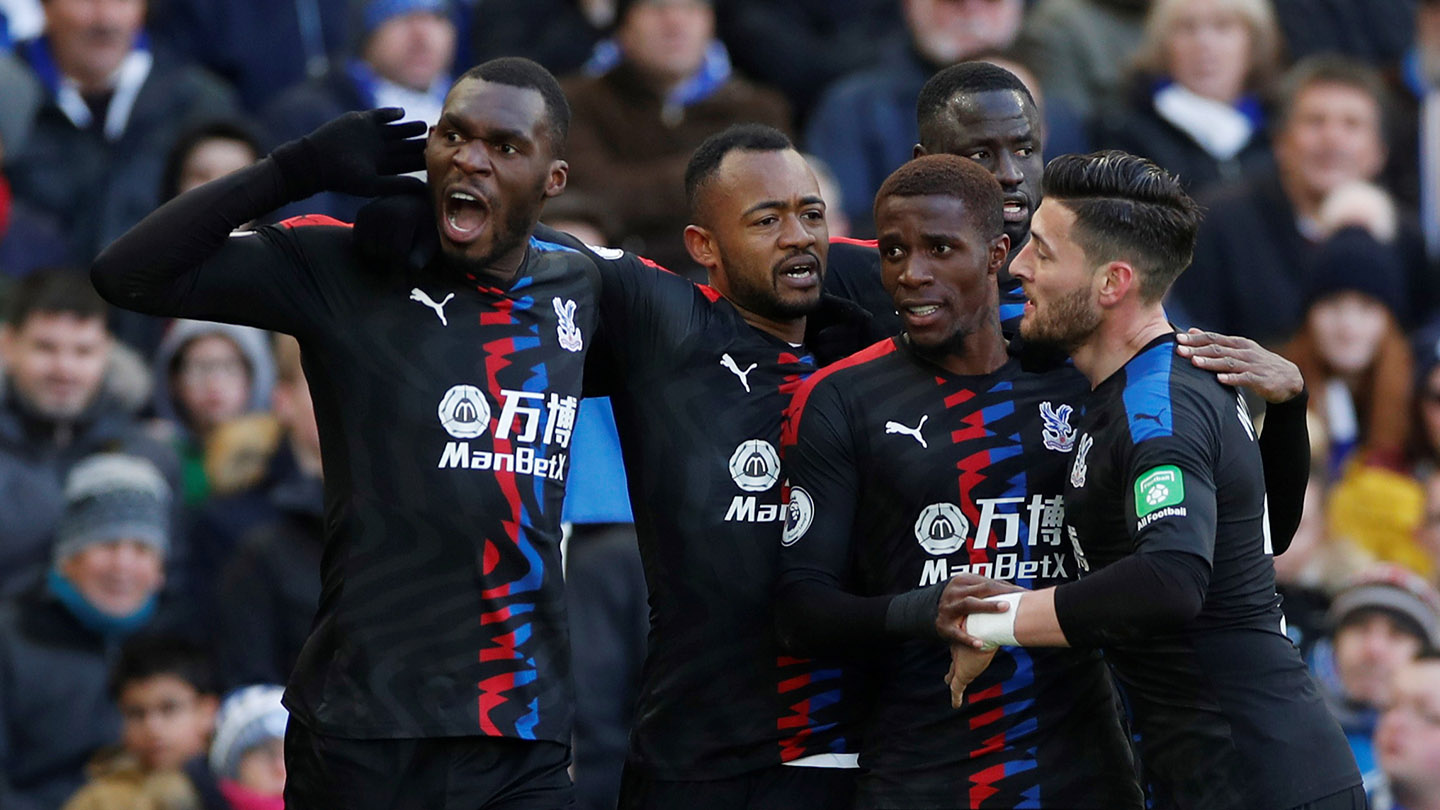 The south coast air clouded with a flare’s hanging black soot as groups of Albion supporters took shelter in the Amex’s facilities, and Potter reacted to the goal by using his final two substitutions.

The tactician's switch wasn't enough, however, and the Eagles remained dominant, with Zaha crashing off the post as the game ticked to its final seconds. Moments later, the full-time whistle signalled a colossal Palace win.

Not only had the Eagles stormed past their rivals, but they had furthered their tally as their greatest total at this stage of a Premier League season.

Stay tuned for full match highlights and post-match reaction via Palace TV. Either click here now or 'Palace TV' within the app - which you can download here for free.