Crystal Palace suffered on the wrong side of two key decisions this evening as they lost to Manchester United, and were frustrated to fall to defeat despite a strong, markedly improved performance.

Just minutes later, the Eagles threatened again, after smart, confident play swept across the pitch before Joel Ward crossed towards Zaha in the box. The Ivorian struggled to keep control, and United fired the ball to apparent safety.

But, on the edge of the area, Patrick van Aanholt shot straight back into a crowd of bodies to warn the visitors of Palace’s intentions. 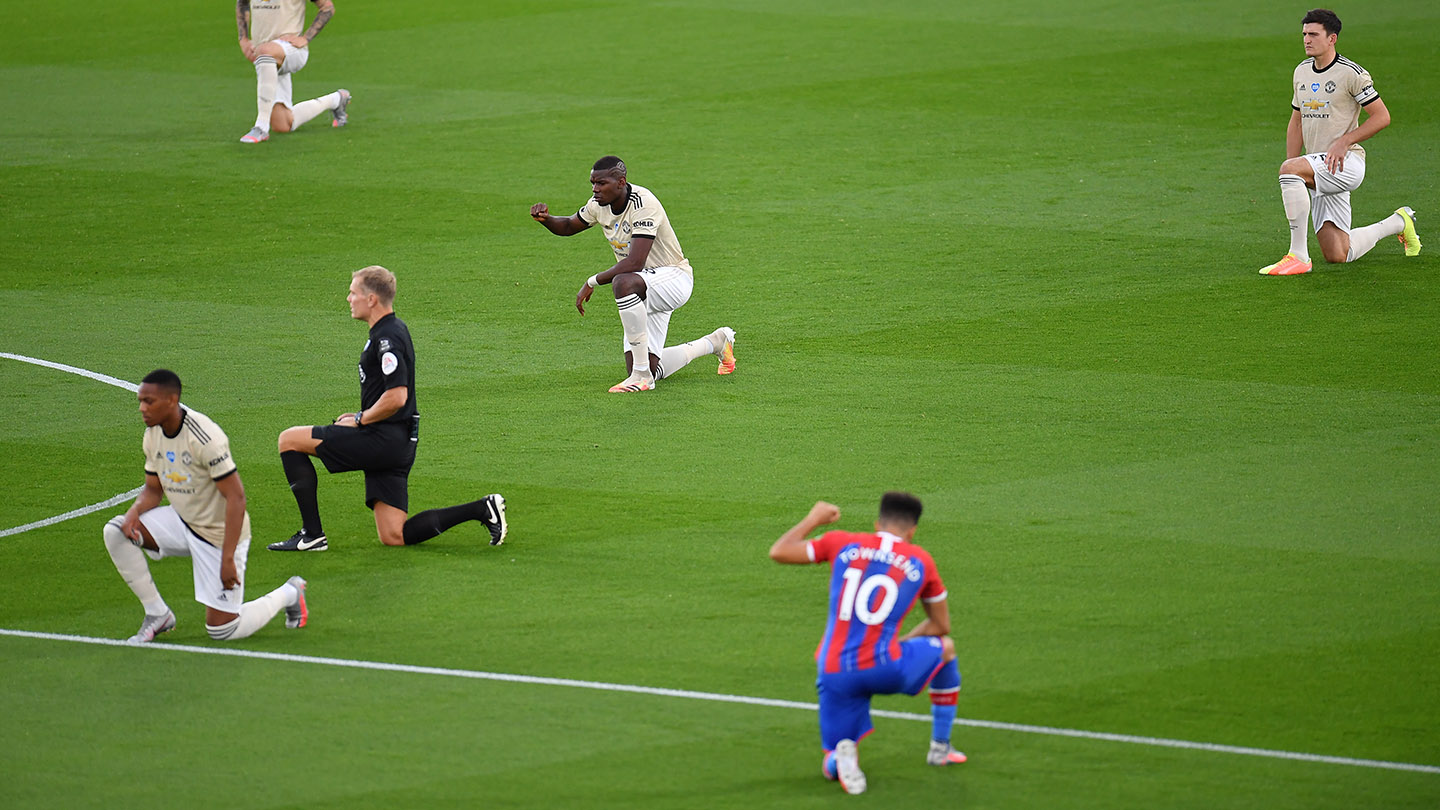 Reacting to their host’s bright start, United reminded the Eagles of their attacking prowess through an unconventional source - Harry Maguire heading over the bar from a testing Bruno Fernandes corner.

During the drinks break, Hodgson and Zaha could be seen in a protracted, animated conversation and, clearly, whatever the former said had an effect, as the latter headed at goal barely 30 seconds after.

But, midway through the first-half, United had established their foothold in the game, their earlier lethargy disappearing with every push forward. Palace worked hard to contain them, and their efforts paid dividends with the game locked at 0-0. 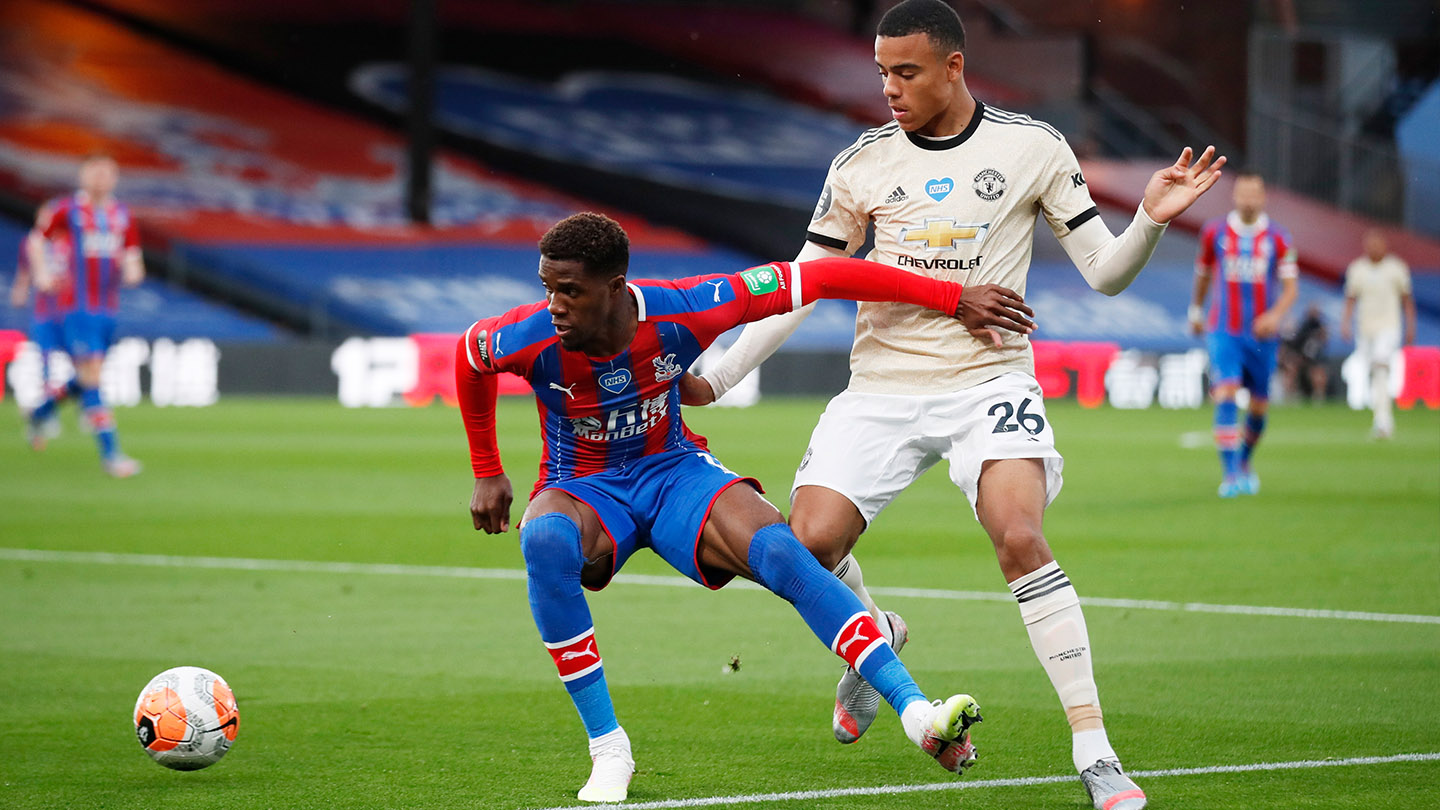 As he did earlier, Maguire headed past goal with United’s only real effort of note as the match rolled along at a steady pace.

Back in the centre of attack, Jordan Ayew sought to disrupt this, unleashing a fierce attempt at De Gea, but again, the Spain international firmly beat the shot to safety to keep the teams level.

Half-time dawned and the score seemed destined to remain static until Zaha hit the turf in United’s box after Victor Lindelof clattered his legs. The winger’s penalty appeals went unanswered, however, and, at the other end of the field, Marcus Rashford took a cruel lead as he danced in Palace’s area and slotted home smartly past Vicente Guaita.

Palace will have felt the injustice of conceding at the end of such an even half, and captain Luka Milivojevic almost responded furiously as De Gea tipped his whipped free-kick wide of goal. United’s No.1 did well, and ensured half-time came with his club in the lead. 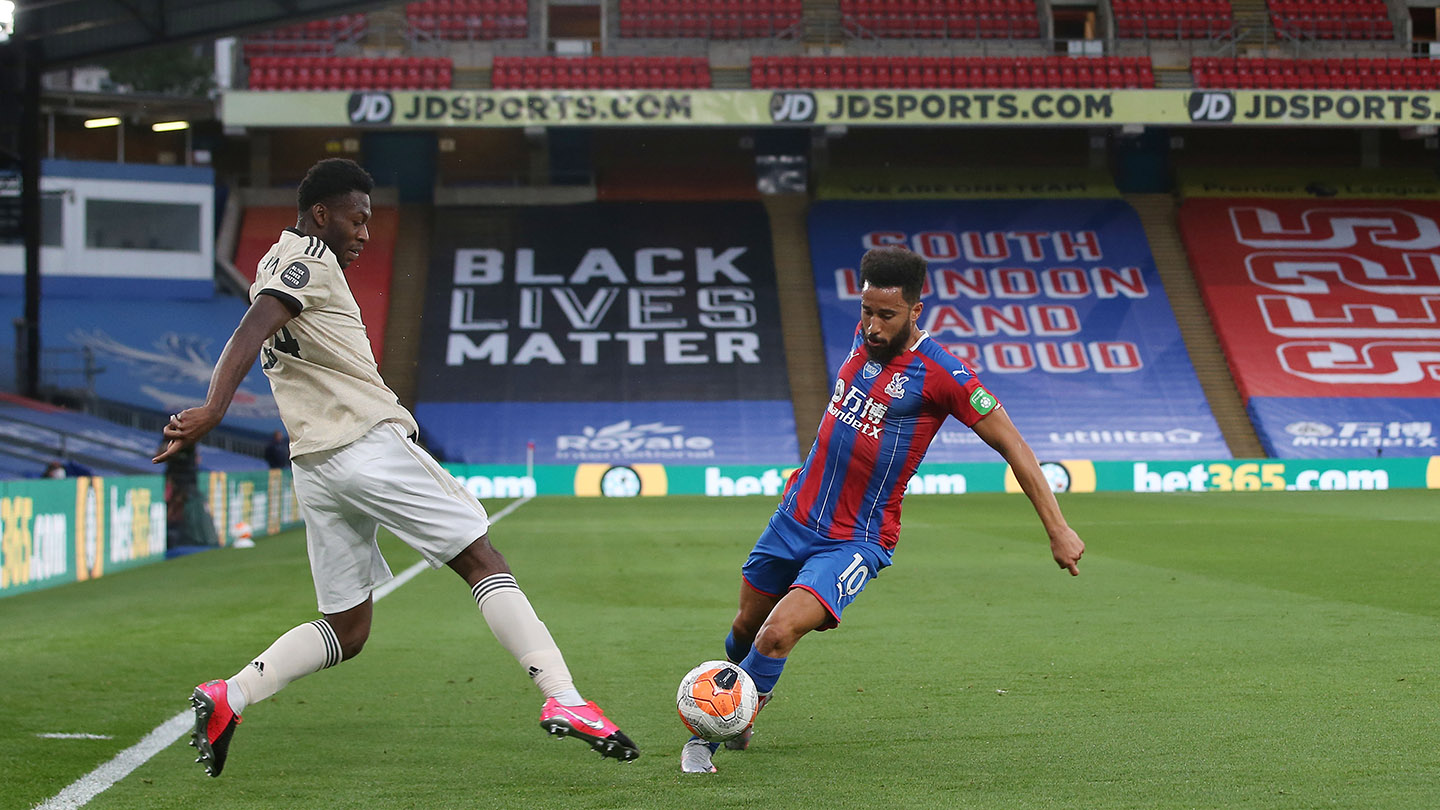 Palace faced an uphill struggle with the game’s resumption, United unbeaten when leading at half-time from 20 games this season.

The home side didn’t appear concerned with the stats, however, and surged forward to pin their hosts back and find an equaliser. They duly did so when Zaha beat Aaron Wan-Bissaka to play Ayew in at the back post, who turned home on the stretch.

But after celebrating, Ayew was brought back down to earth as VAR judged the effort to have been marginally offside.

Palace had to roll with another cruel twist of fate, and resumed the game still behind. James McCarthy kept De Gea alert as the Spaniard held his fizzing shot from distance, with the Scotsman embodying Palace’s determination to open their account. 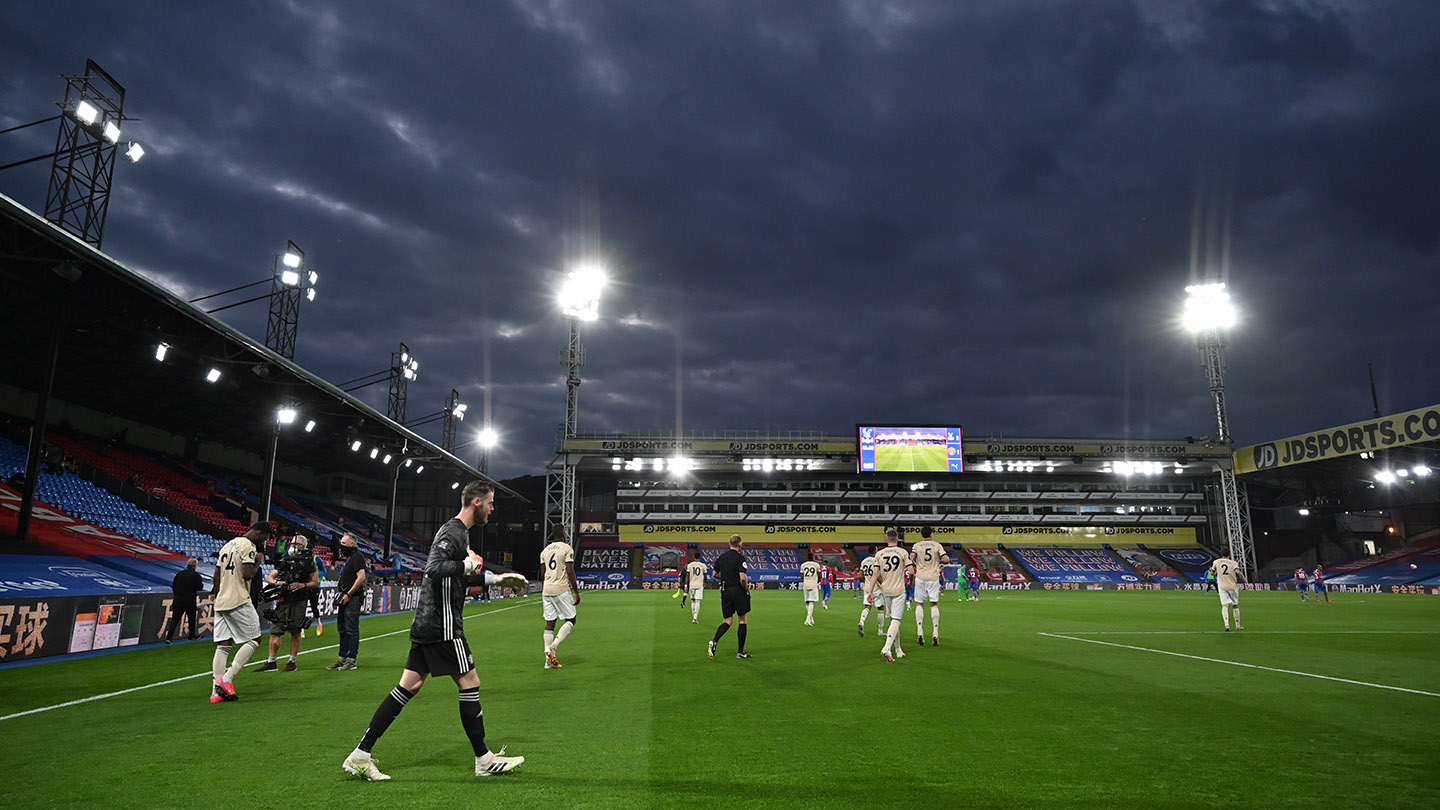 Perhaps with one eye on their upcoming FA Cup clash, United made a double change around the hour mark and Palace fans will be pleased to see Jeffrey Schlupp take to the turf for the first time since December, the popular No.15 recovering from injury over the last seven months.

Schlupp’s introduction came as the game returned to its first-half equilibrium, and United reinstated their presence as Fernandes rattled the post from 10 yards out.

The visitors did more than just reestablish themselves five minutes later, however, when Anthony Martial showed his strength to strike home within the box.

Unfortunately, trying to block the Frenchman, Van Aanholt fell awkwardly, undergoing a lengthy spell of treatment that included oxygen. Eventually, the Dutchman was stretchered from the pitch in distressing scenes; another cruel setback for Palace. 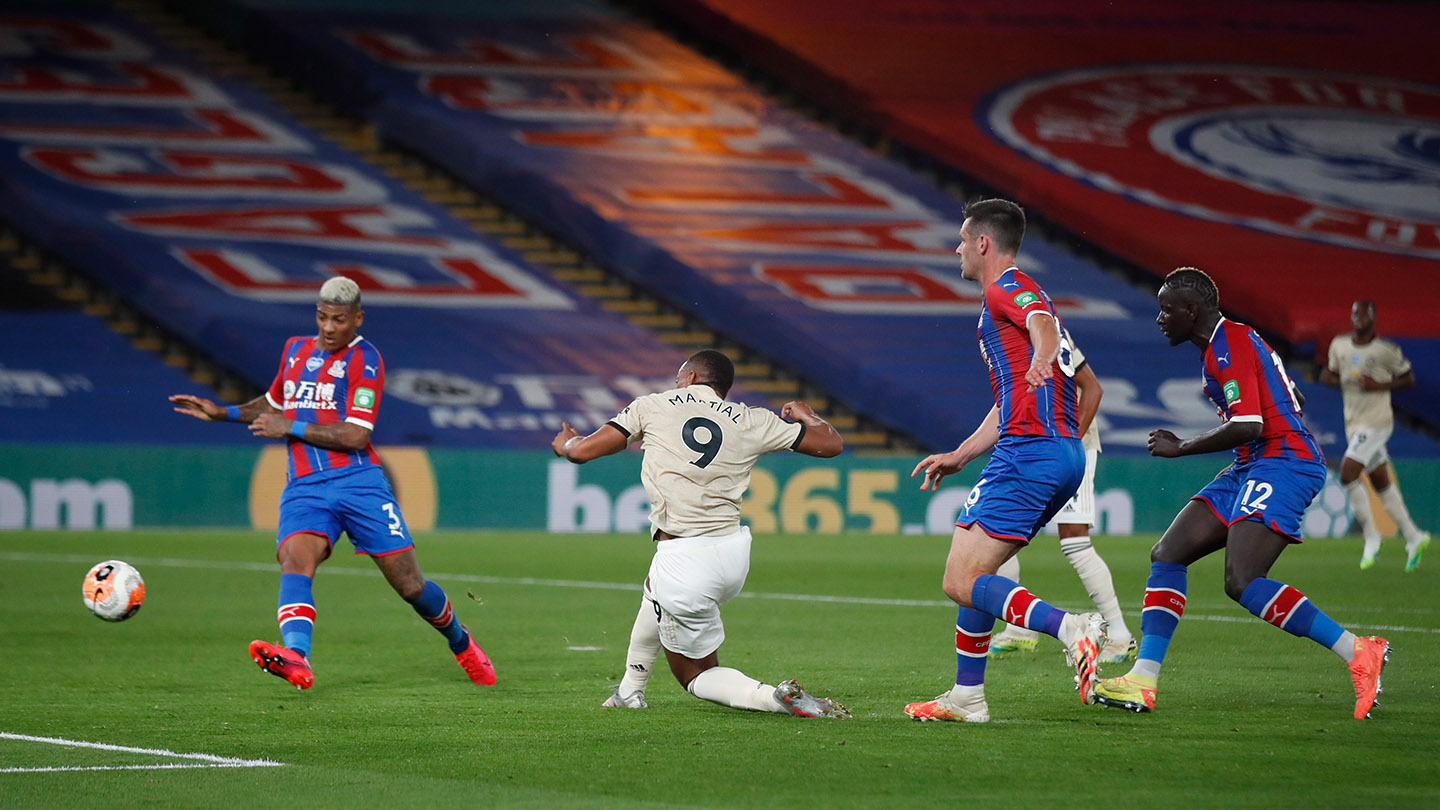 Zaha, who looked driven all evening, battled to provide his boyhood club with a chance, but De Gea capped-off a strong performance with a fine save at his near post.

At the other end of the pitch, the game's second Spanish shot stopper made an equally impressive save with a big, pushing glove under a late Rashford shot.

Fighting their way through 11 (eleven) minutes of added time, Palace never allowed their role in the game to dip, and ended strongly as they began. However, in cruel circumstances, the Eagles were left empty-handed.

Full post-match reaction, highlights and both managers' press conferences will be available to watch free on Palace TV or the official Palace app. Either click here or 'Palace TV' within the app to enjoy.