For the second time this week, Jordan Ayew left it late to win the game for his team as Palace edged past a spirited 10-man Grimsby Town and advance into the FA Cup fourth round.

Despite playing with an extra man for 88 minutes following Andrew Fox’s VAR-assisted dismissal, it looked as though Roy Hodgson’s team would require a replay at Blundell Park despite peppering the Mariners’ goal throughout the contest, included striking the post three times.

However, in the 86th-minute substitute Ayew popped up to head home from a free-kick to net in successive games for the Eagles and squeeze past the League Two outfit.

VAR was being used at Selhurst Park for the first time, and just two minutes into the game it would affect the whole of the cup tie. Andrew Fox lunged in on Andros Townsend and his studs caught the Palace winger nastily on the ankle, and just as Martin Atkinson seemed satisfied to produce a yellow card, VAR official Jonathan Moss suggested that a red should be issued instead and Fox was sent for a very early bath. 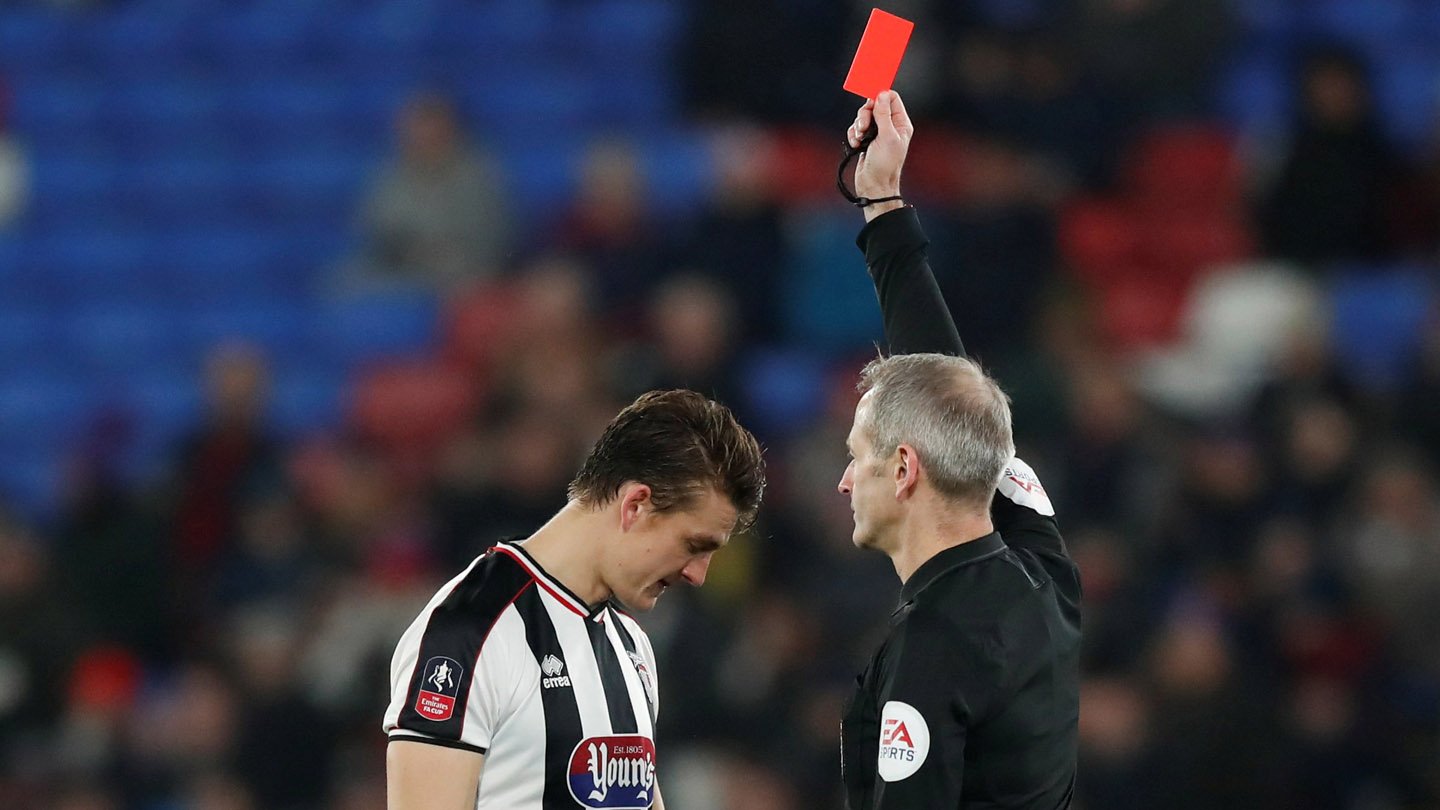 That might have caused many to believe that the game would be a formality for the hosts, especially when Alexander Sørloth saw a header cleared off the line by Reece Hall-Johnson soon after, but Palace received a big scare when Wes Thomas popped up at the back post to connect with a cross but could only divert the ball wide. 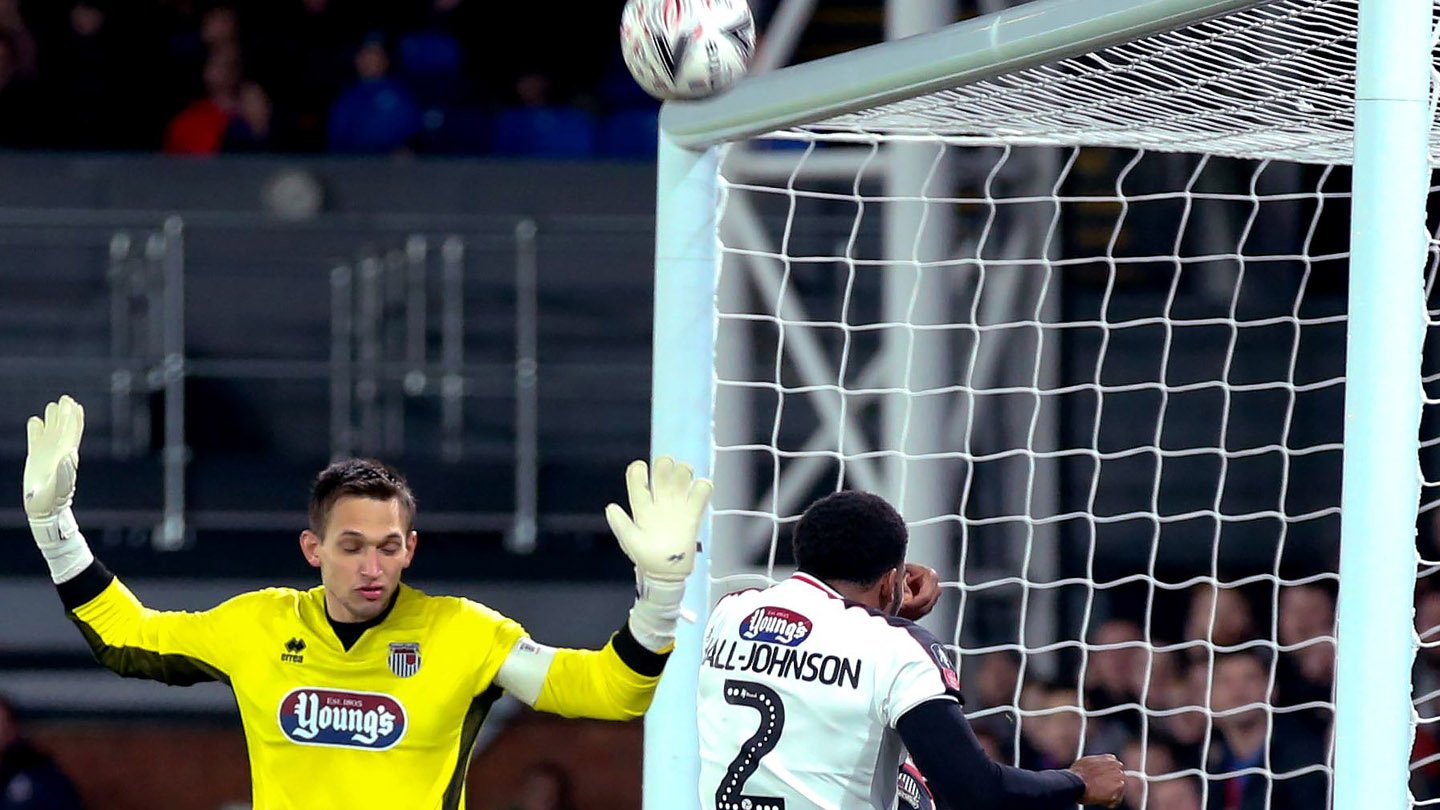 However the chances soon began piling up, and before the midway point of the first half Jeffrey Schlupp had hit the side-netting before setting up Sørloth who shuffled the ball wide, Wilfried Zaha forced James McKeown to save with his legs and Max Meyer saw a header brush the post with McKeown denying Sørloth with the rebound.

Continuing with the theme of the Eagles’ season, the woodwork was struck again on 32 minutes through an unlikely source when Martin Kelly hit a low left-footer towards the bottom corner which McKeown tipped onto the woodwork before claiming, and then Schlupp jinked his way into the box from the left flank but blazed into the Whitehorse Lane Stand. 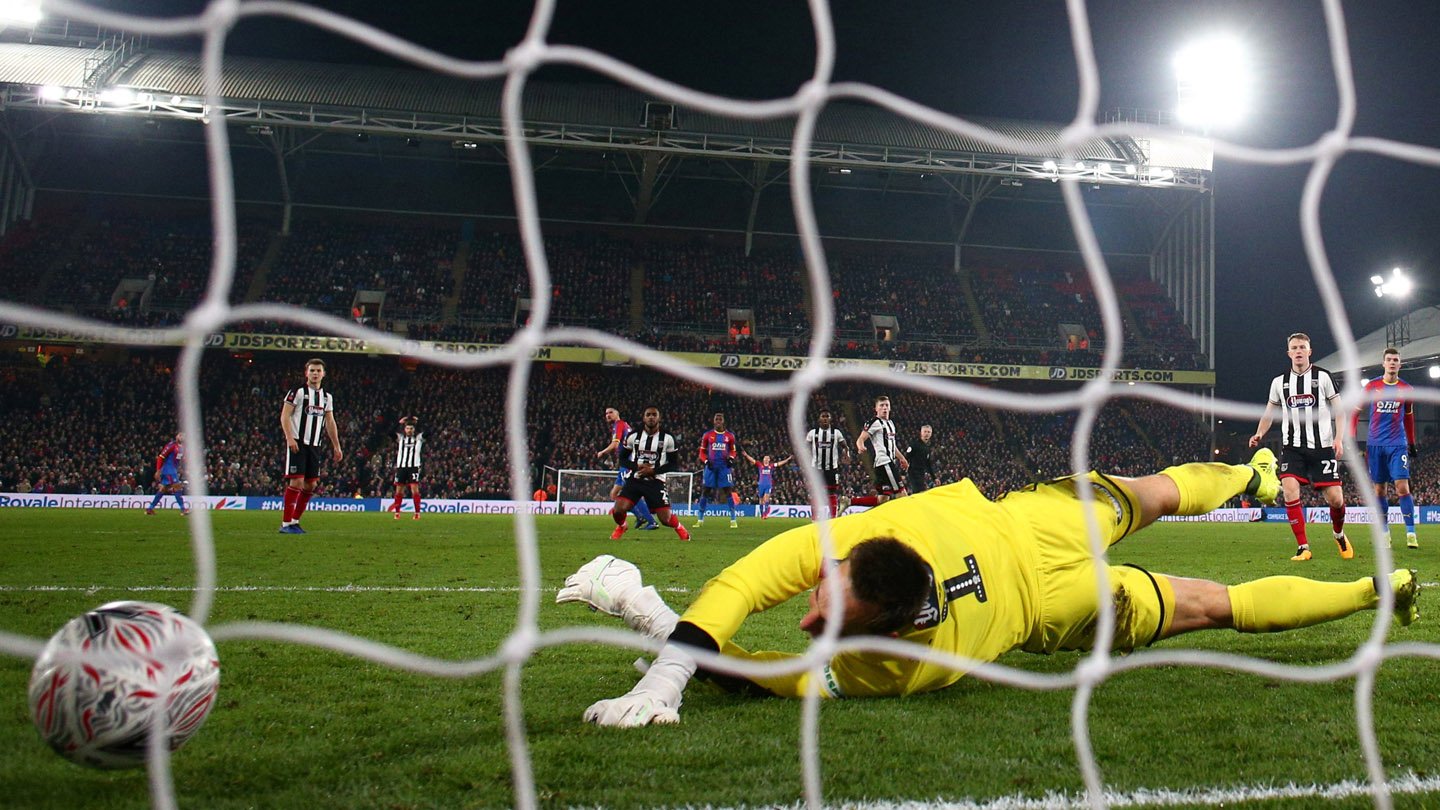 For all the Eagles’ efforts, they couldn’t quite find the breakthrough their domination merited thanks to some misfortune and resolute Mariners defending, but the game continued in the same vain after the restart and seconds into the second half Sørloth stooped to nod just wide, and Kelly once again took aim from range and forced McKeown to beat the ball away.

On the hour mark the post was hit for a third time when Townsend whipped in a cross which Cheikhou Kouyaté got his head onto but again the goalframe wasn’t on the Eagles’ side, and then the winger twice tried to add another stunner to his ever-growing collection when he drilled in a shot from 30 yards which whistled over the crossbar and then sent a curler wide of the mark. 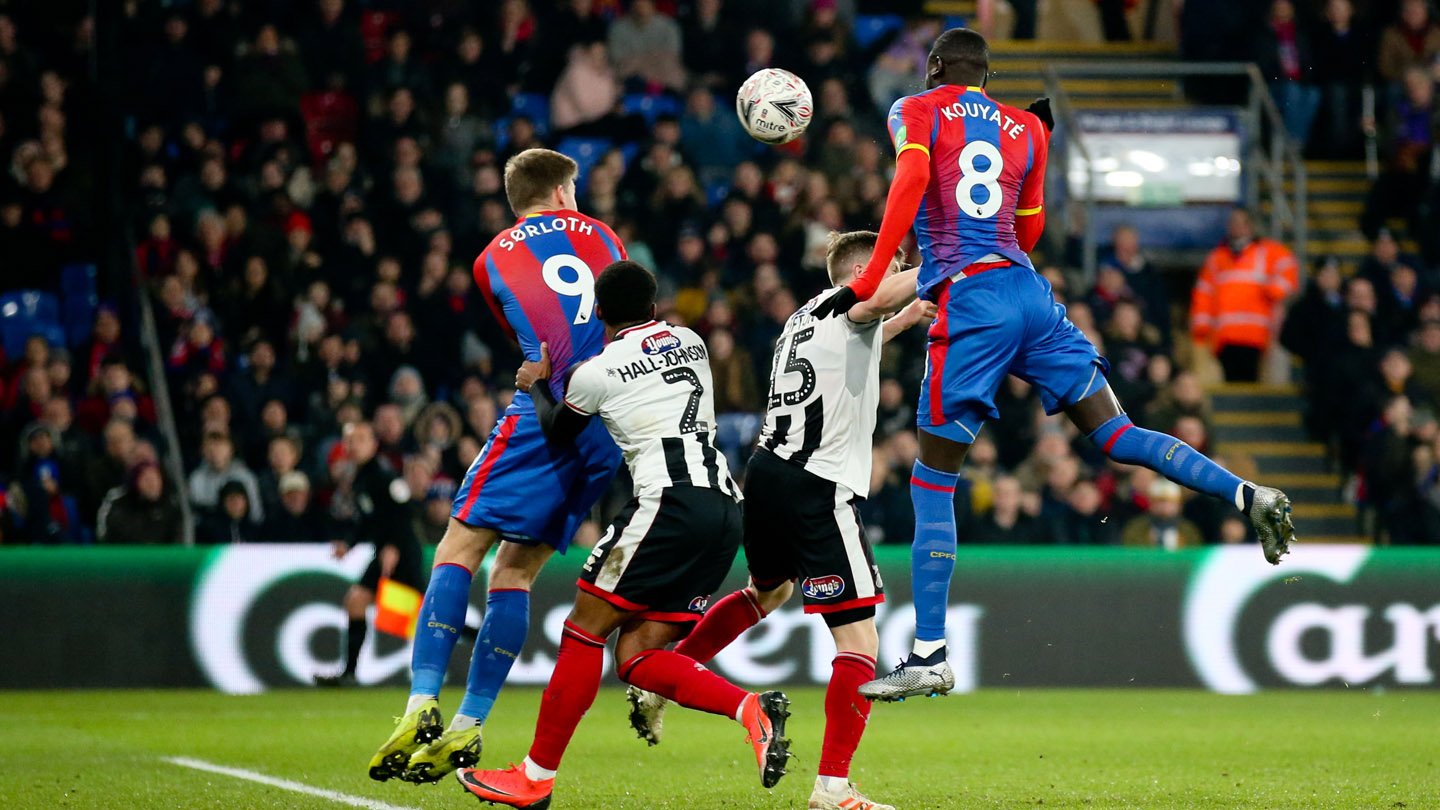 As the shot count crept towards the 30-mark, Scott Dann was the next to go close when his goal-bound attempt bent away from the target from range, but four minutes from time the breakthrough was finally found. Ayew won a free-kick which was curled into the area by Schlupp, and his fellow Ghanaian was there to head past McKeown and ensure the Eagles’ place in round four. 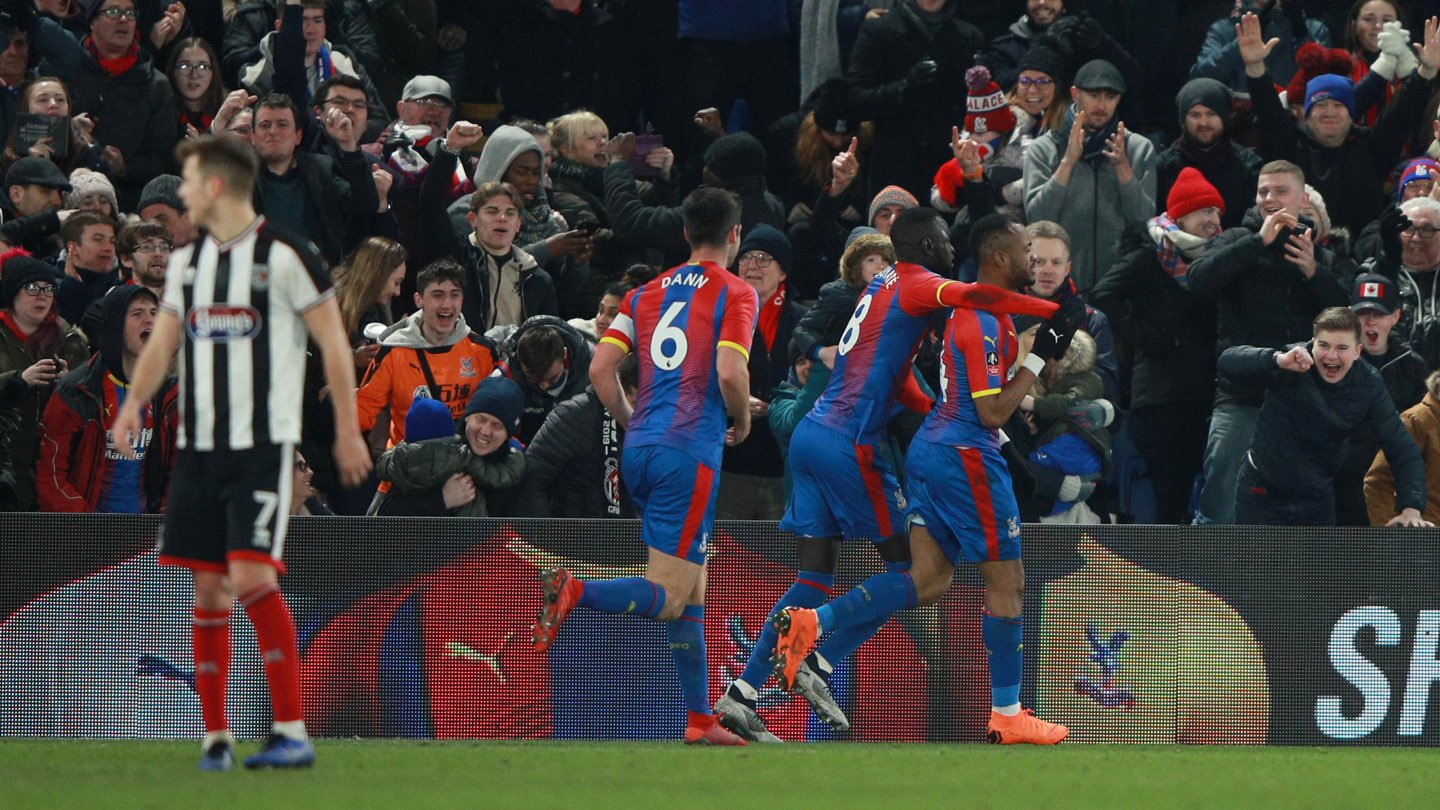 Grimsby's efforts were acknowledged by the strong near-20,000 crowd at full-time, with a large number staying behind to sportingly clap the fourth-tier side off the pitch having come so close to earning a replay with 10 men before Ayew settled matters.