The Eagles led at half-time following Craig Cathcart’s calamitous own goal, but the Northern Irishman atoned for that by heading home a corner at the right end to spark the comeback which was completed thanks to a fine volley by Tom Cleverley who exorcised his own SE25 demons following his red card in this fixture last season.

Unlike that game, there was to be no late drama in Roy Hodgson’s team’s favour who fell to only their second defeat in their last seven matches as Watford clinched their first double over the Eagles since 2002.

Having struck the woodwork more times than any other Premier League team this campaign, Palace received some much-deserved goalframe fortune just three minutes into the clash when Gerard Deulofeu slalomed his way into the area and tucked the ball past Vicente Guaita but saw it strike the upright, only to fall perfectly for Roberto Pereyra to net the rebound but he too somehow hit the post with the goal gaping. 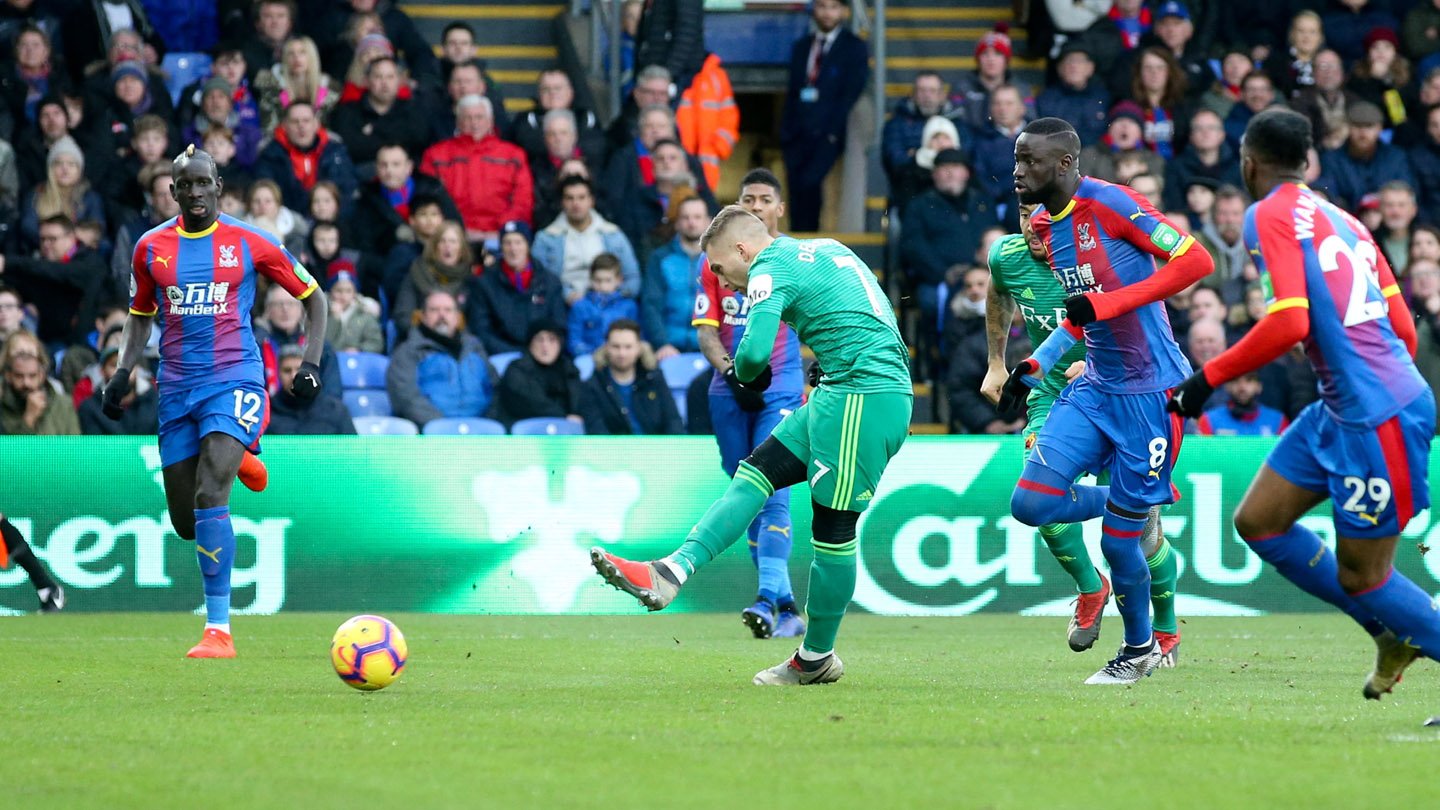 Having rode their luck, Palace began to impose themselves on the game and Wilfried Zaha shot straight at Ben Foster before Jordan Ayew saw a difficult header loop well over the bar, which was soon followed into the Whitehorse Lane Stand by a Cheikhou Kouyaté blast from 30 yards.

Both teams saw aerial opportunities go close when Troy Deeney rose highest to meet a Jose Holebas cross but saw it drop just wide, and then James Tomkins had a header from a corner tipped over by Foster, which would eventually lead to the opening goal on 36 minutes.

Luka Milivojevic’s subsequent delivery dropped into a packed penalty area and Mamadou Sakho and Tomkins hacked at the bouncing ball to force it towards the net, but in desperation Abdoulaye Doucoure tried to hammer it to safety but the clearance ricocheted off Cathcart and despite Foster’s best effort, he couldn’t claw it away in time. 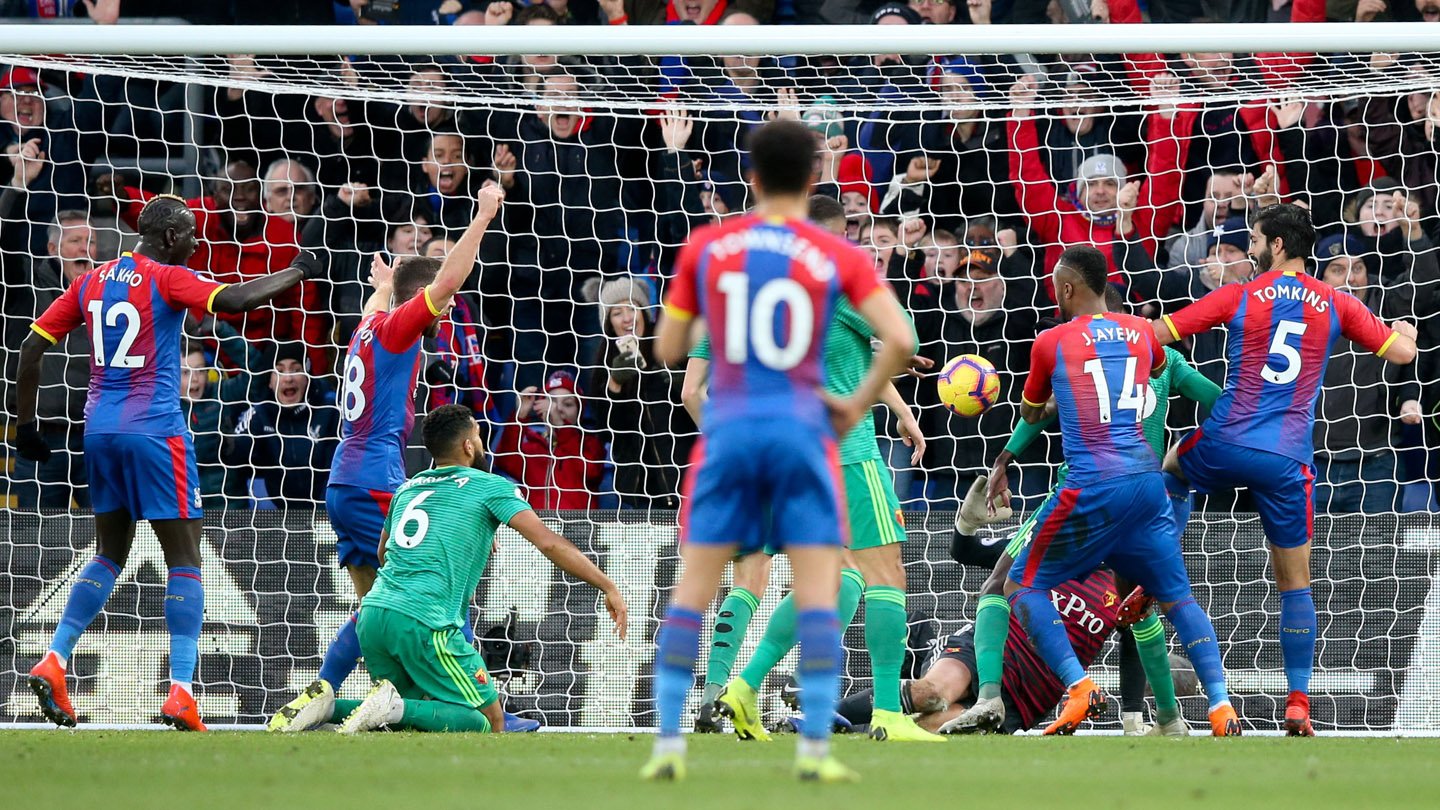 All the luck wouldn’t go Palace’s way in the opening 45 though as Guaita was forced off with what looked to be a calf injury just before half-time, but once play restarted they continued to look the more threatening and the half was only three minutes old when Zaha had two good chances to extend the lead when he pounced on a mistake to go one-on-one with Foster but the keeper’s outstretched leg made the save, and then seconds later the Ivorian scuffed wide from a tight angle. 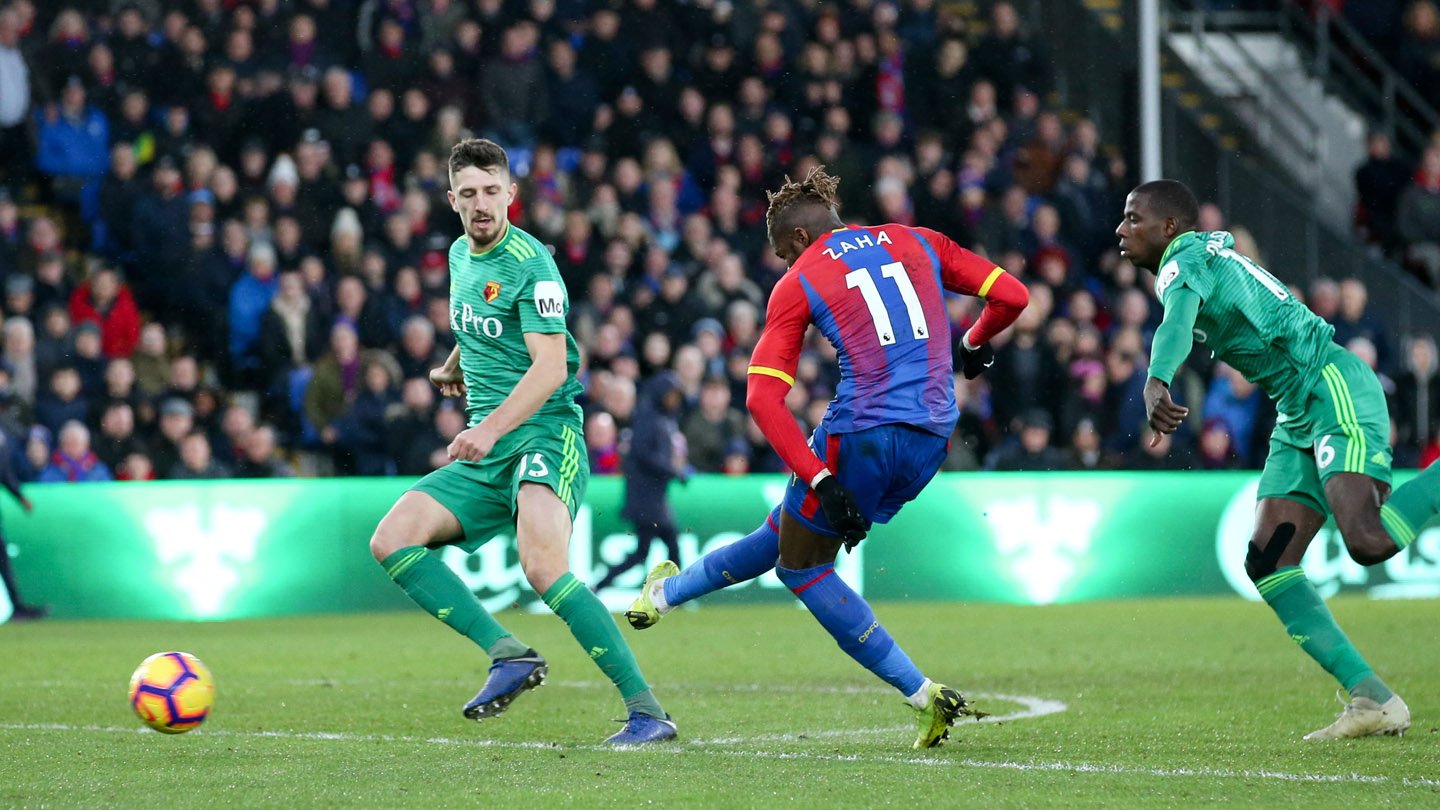 With the game on a knife-edge Palace needed the all-important cushion of a second goal and it nearly arrived on 62 minutes when Milivojevic forced Foster to scoop the ball away from his top corner after a fierce half-volley, but six minutes later the Hornets produced a sting in the tale when they managed to restore parity when a Holebas corner was swung deep into the area for Cathcart to head past Wayne Hennessey and once again find the Whitehorse net. 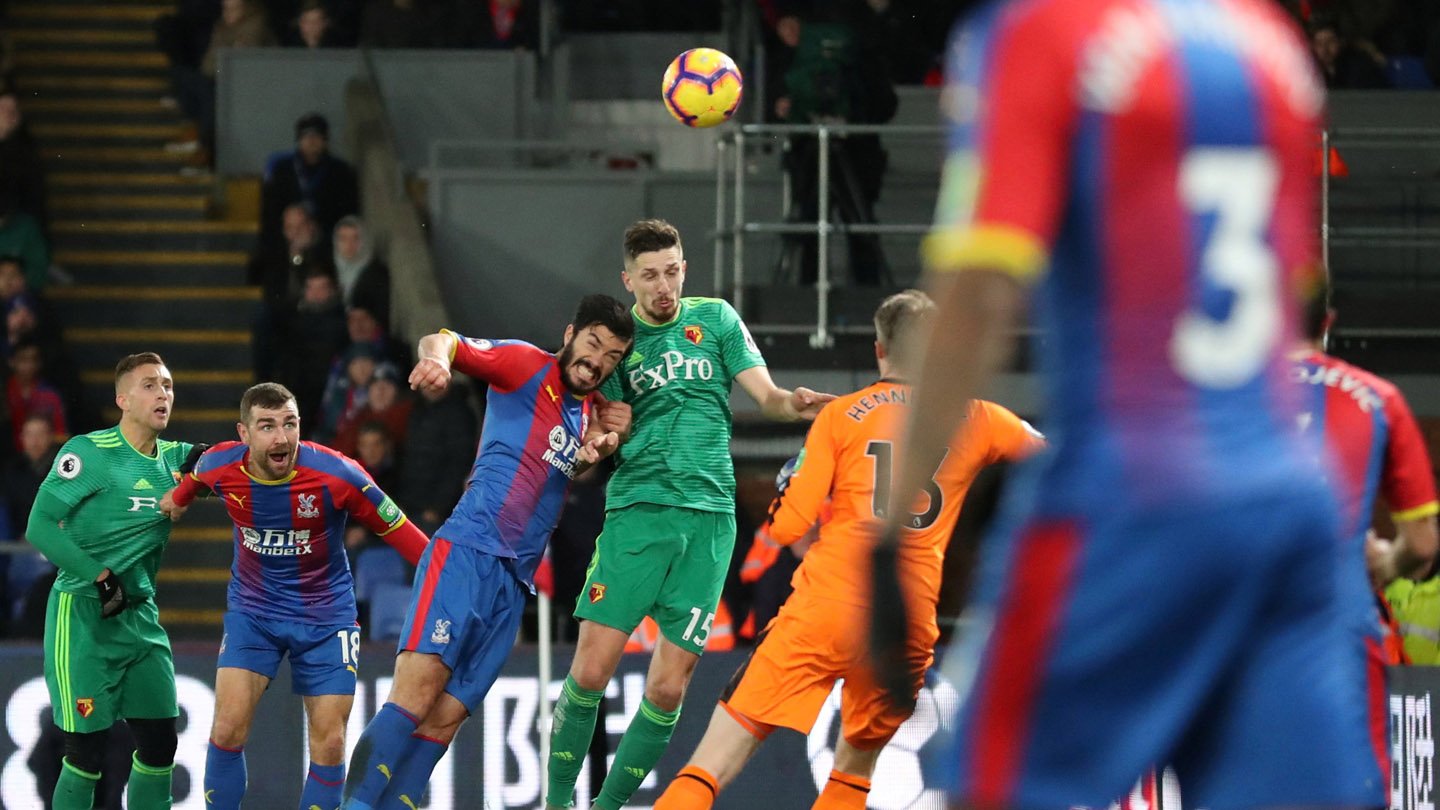 Zaha nearly produced a moment of magic when he terrified the Watford defence and sent an inviting cross begging to be tapped home by James McArthur but he missed it by a stud’s length, but the home side’s confidence was a little more fragile and Aaron Wan-Bissaka was forced to clear off his own line after Deeney saw a poached effort deflect goalwards off Kouyaté following another spot of penalty box pinball.

But on 74 minutes Watford ultimately turned the game on its head with a sensational strike. The resulting corner wasn’t cleared effectively and dropped into the path of Cleverley - who had only been on for six minutes - and he acrobatically connected with the dropping ball high in the sky and thundered an inch-perfect volley into the top corner to stun Selhurst. 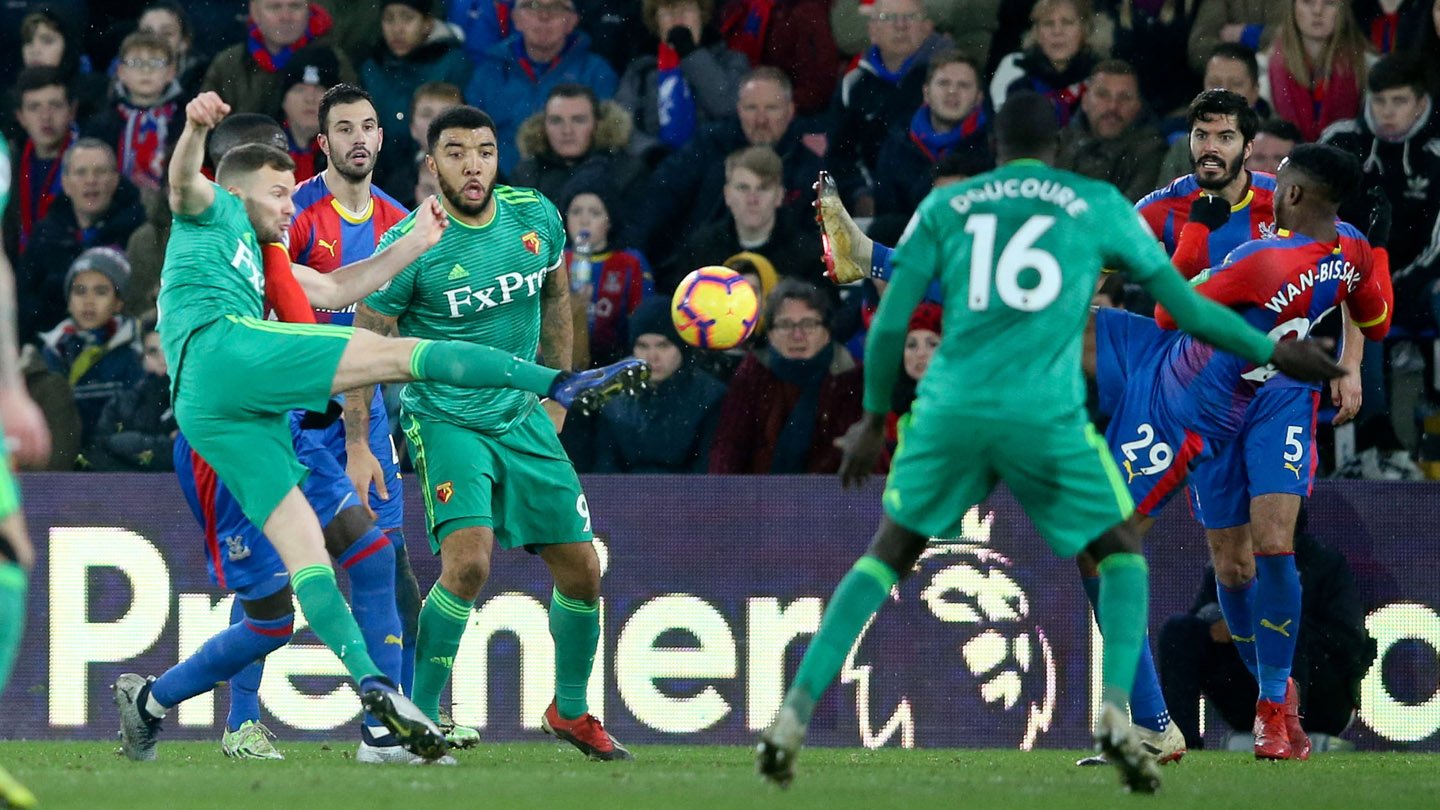 Hodgson sent on the fit-again Christian Benteke to try and conjure up an equaliser, but the last opportunity would fall to Zaha who seemed score a tap-in following some more penalty box pinball, but Foster produced an excellent full-length reaction save to ensure his side claimed the victory. 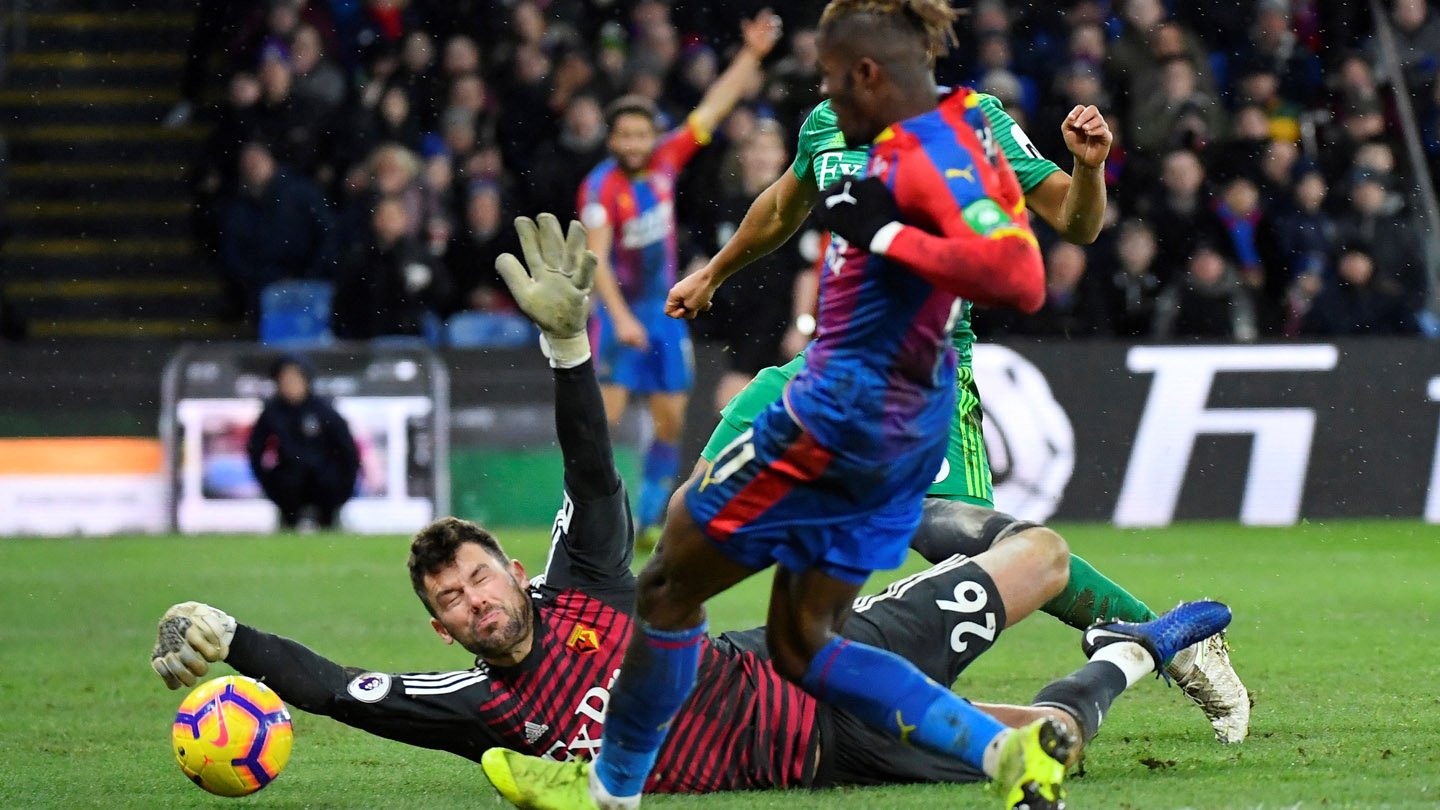