The game started at a considerable tempo, with both sides seemingly keen to zip the ball around on the wet surface. It was clear that, despite their respective tough runs of form, each was aware of the attacking threat the other could pose, and early forays forward for either side were tentative.

The visitors showed bursts of pace coming forwards as Pedro Neto found space on the right-hand side, while Ki-Jana Hoever’s clever through ball found new signing Willian Jose up front, but his cut back was intercepted.

Palace, with the neat footwork of Eberechi Eze centrally and Jordan Ayew drifting in from the right, were causing problems for the Wolves midfield, as Michy Batshuayi provided a valuable outlet operating alone up front.

Wilfried Zaha fed Batshuayi with his back to goal, and the Belgian turned his man smartly, managing to stay on his feet to find Nathaniel Clyne on the edge of the box. The defender’s shot was from a tight angle and briefly looked like it might trouble Rui Patricio in the Wolves goal, but it was always rising. 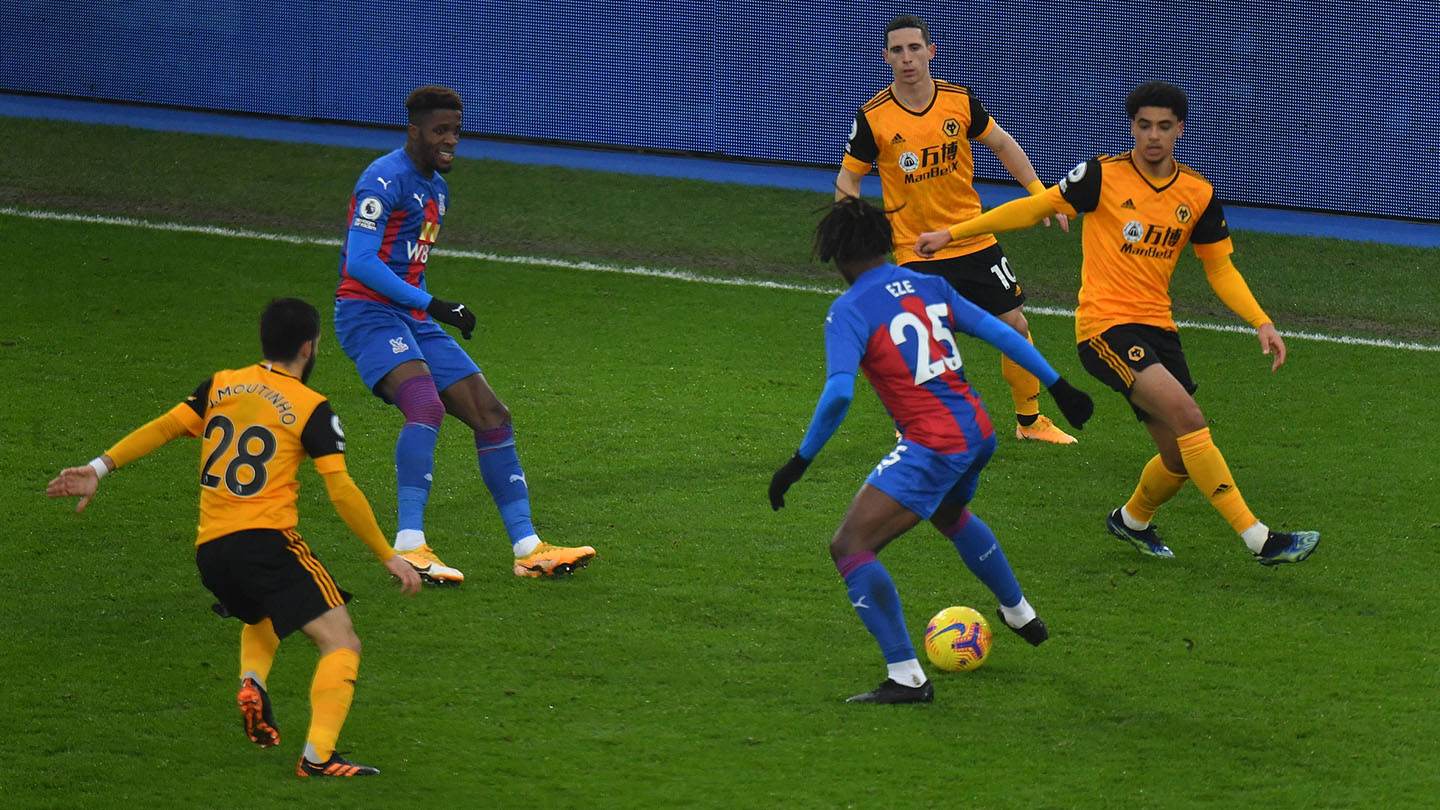 When Palace got forward, they did so in numbers. Patrick van Aanholt supported Zaha on the left, with McCarthy and Milivojevic stepping in to break up the burgeoning Wolves counter-attacks.

As the first-half wore on, Wolves grew into the game, finding joy out wide with a series of threatening crosses that flashed across Vicente Guaita’s goal, but failed to find a player in old gold.

Crossing from a more central position, the ball found Willian Jose who flicked on to Dendoncker five yards out, but the Wolves man elected to take a touch rather than strike first time, which allowed Vicente Guaita take control.

In added time at the end of the first-half, Palace came closest to taking the lead. Van Aanholt did superbly to get to the byline, where his cut back found Nathaniel Clyne on the edge of the penalty area. Clyne’s shot was deflected into the path of Batshuayi six yards out, but Conor Coady did enough to put the Palace man off, and the chance was gone.

With Jairo Riedewald replacing James McCarthy at half-time, Palace resumed control of the ball and continued to push forwards – but Wolves’ threat on the break was ever-present, and it almost saw them take an early second-half lead. 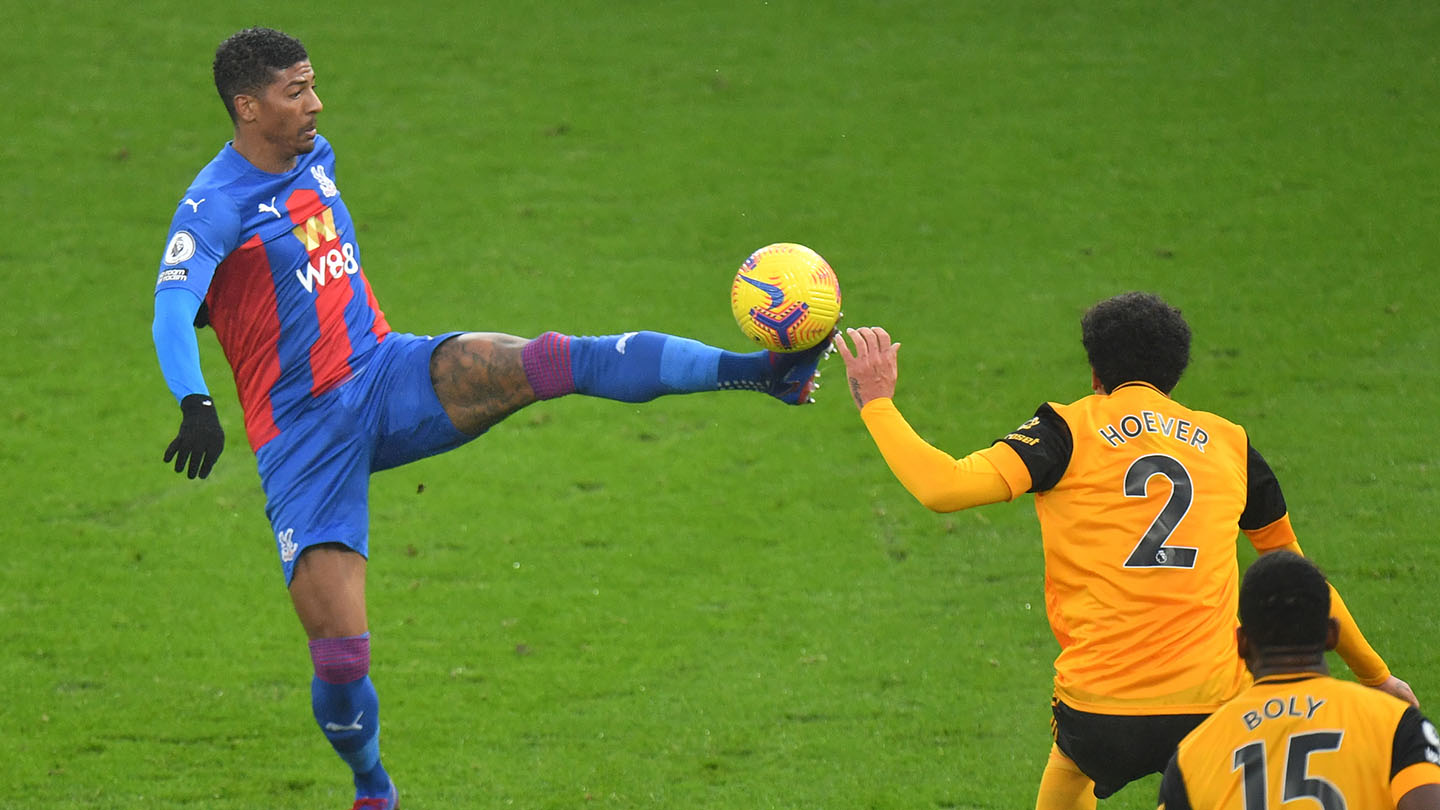 Racing onto Dendoncker’s ball out wide, Podence’s cross dropped for Willian Jose, but Guaita’s reactions were superb in palming the ball behind.

The importance of that save was emphasised minutes later, when Palace took the lead.

Once again it was the impressive Ayew causing problems down the right, looking up and laying a ball across the area to the oncoming Eze.

Rather than hit it first time, Eze feinted away from the oncoming defender to create a yard of space on his left foot, before unleashing a powerful effort that beat Rui Patricio. The shot was fairly central, but such was the force behind the ball that the net was bulging before the goalkeeper could get across.

Palace continued to push forward, and moments later it should have been two. Breaking forwards from a Wolves corner, Zaha flicked the ball to Batshuayi and charged forwards, receiving it back one-on-one with Coady. Chopping onto his left foot, his shot cannoned off the crossbar and out, with Patricio beaten.

Wolves were still dangerous in attack, with the newly introduced Adama Traore beating two defenders before his cross was blocked behind for a corner.

For all Palace’s dangerous attacking play, they were supported once again by a goalkeeper in fine form, as Willian Jose’s downward header was pushed away from a corner.

From the resulting break Zaha ran at the Wolves defence once again, the ball stolen just as he prepared the pull the trigger.

As the visitors pushed for an equaliser, Palace's determination to defend as a team will surely have impressed Roy Hodgson, with Cheikhou Kouyate resolute in defence and Zaha willing to keep running in attack.

The Eagles' game management was superb, and as Wolves pushed forwards in added time they pressed and harried to win the ball back and hold it upfield.

As the referee blew for full-time, Palace celebrated a well-deserved win that sees them secure all three points.

READ NEXT: Vote for your eToro Man of the Match from Palace v Wolves