Report: Heroic performance from Palace earns a point at the Etihad

That will go down as one of Roy Hodgson's side's greatest 90 minutes in his tenure so far with goals from Cenk Tosun and an own goal from Fernandinho either side of a Sergio Agüero brace earning the Eagles a well-deserved point.

Crystal Palace knew what to expect from Pep Guardiola’s Manchester City side and setup accordingly with Roy Hodgson sending his charges out in well-drilled banks to deal with the intricate and patient build-up play of the Citizens.

And it was a first-half the Eagles could be proud of, with Palace – for the second game in a row at the Etihad Stadium – going in a goal up thanks to Tosun on his first start in the famous red and blue.

Gary Cahill won a towering header at the back post from a corner which found an unmarked Tosun who expertly headed past a helpless Ederson. 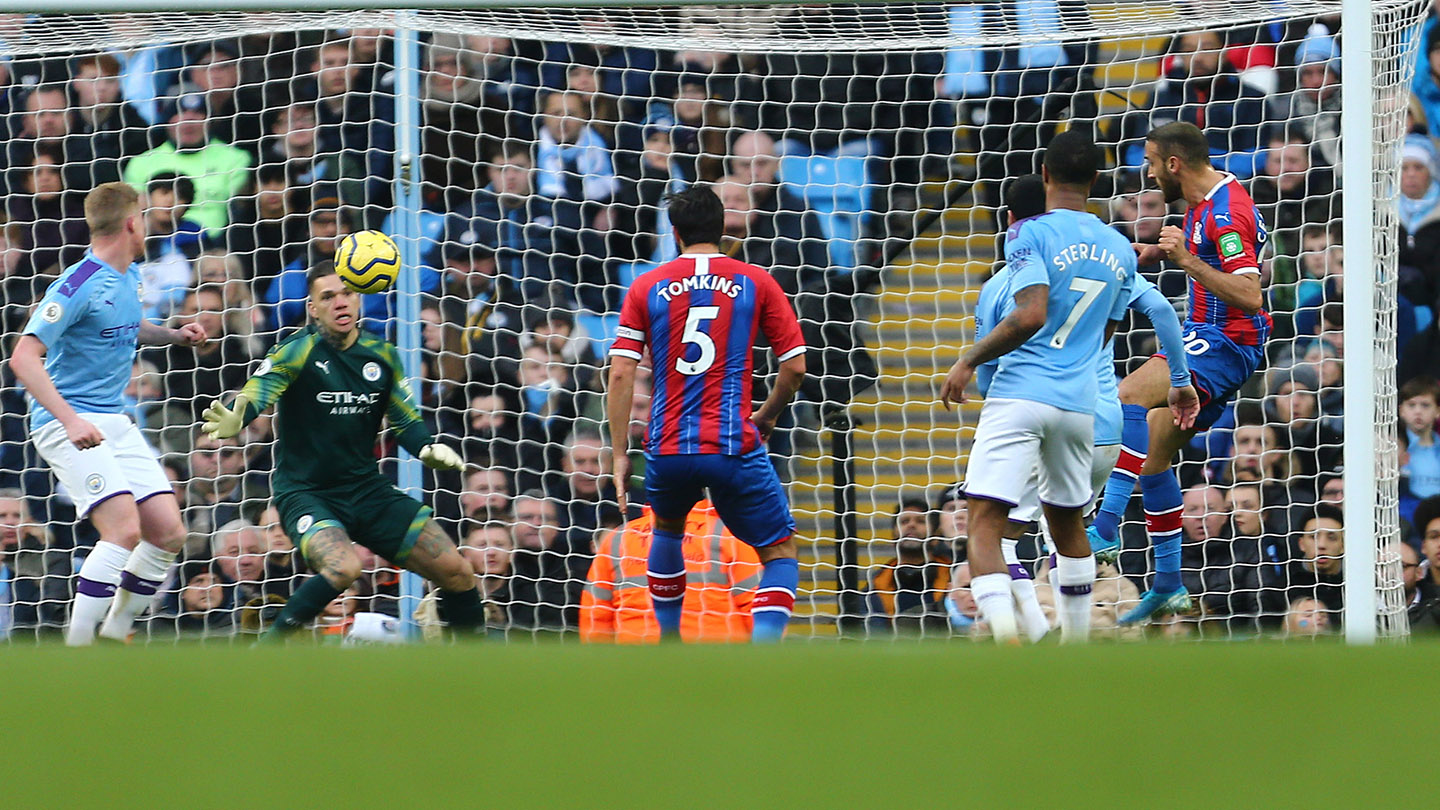 If defenders care about assists then it’s the least Cahill deserved for his heroic first-half efforts. The centre-back summing up the resolute effort from Hodgson’s side with several last-ditch blocks and seemingly failing to not lose one aerial battle against the bombardment of crosses from City.

Palace limited Man City to only a couple of real chances with De Bruyne hammering the crossbar from a free-kick, before Vicente Guaita came out well moments later to bravely thwart Agüero’s attempted dink finish. 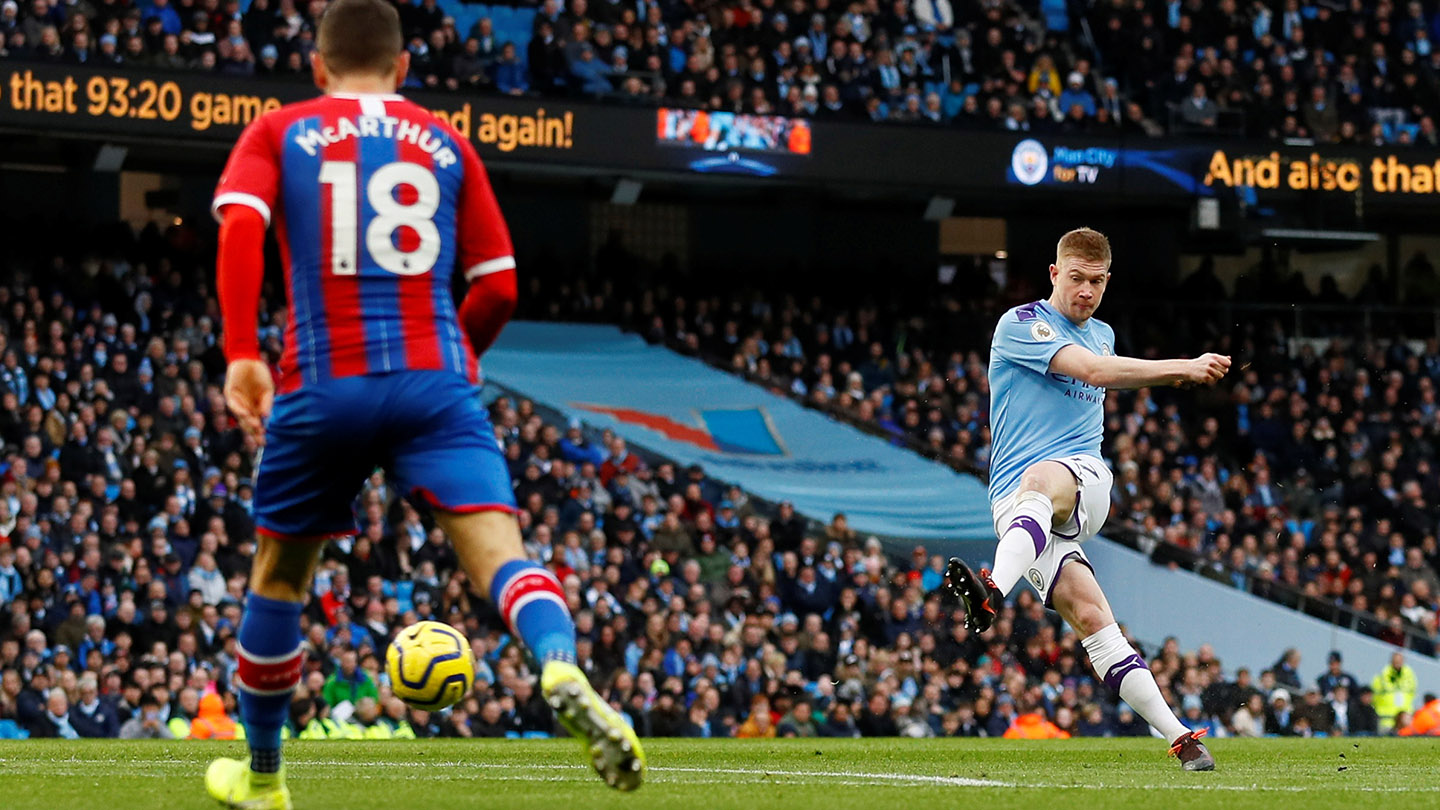 It could’ve been even better for the Eagles had VAR ruled in favour of Wilfried Zaha over a penalty decision after the winger had looked to have left John Stones behind. 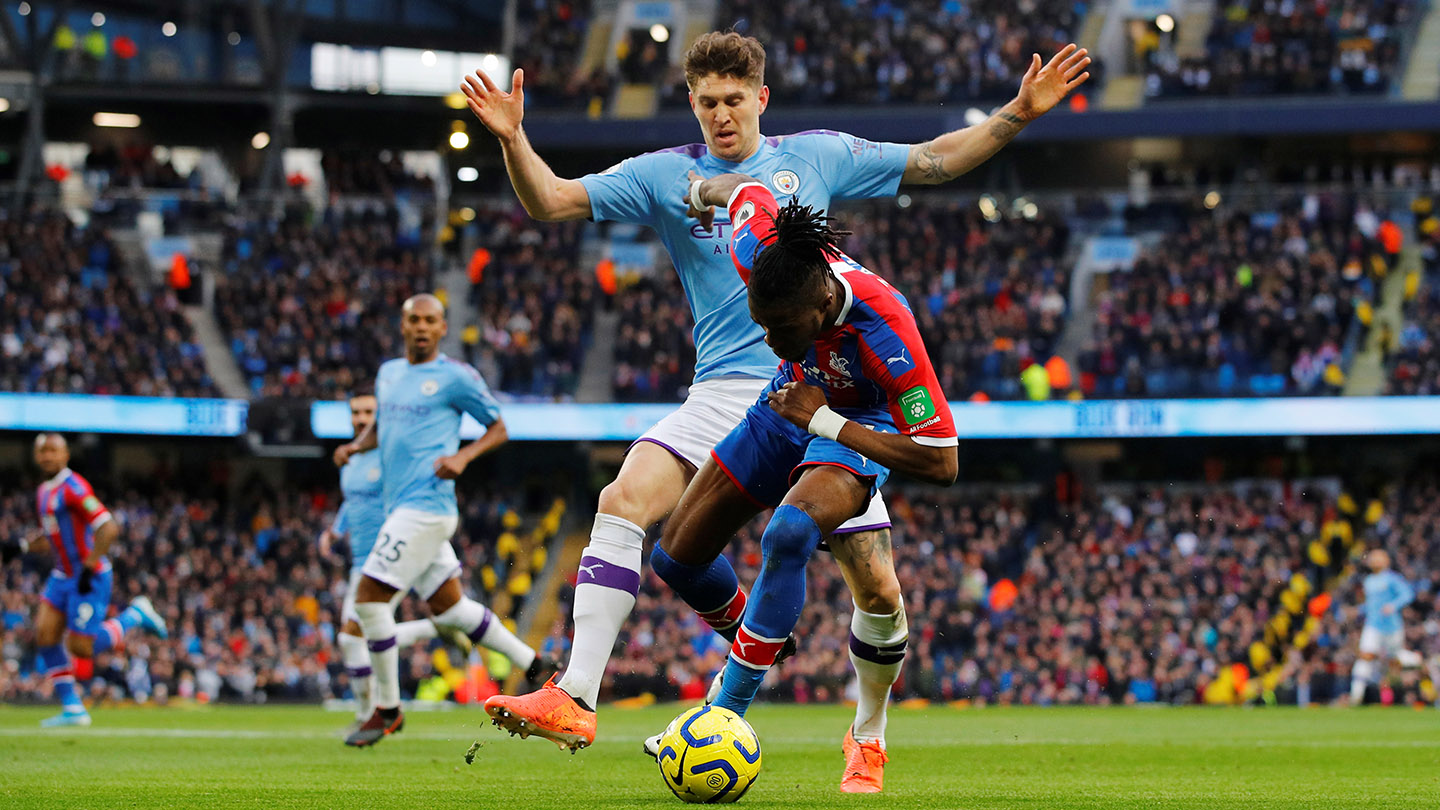 The City pressure started from the off in the second-half, just like the first, and the equaliser for Guardiola’s side looked certain to arrive on 52 minutes. With the odds firmly stacked in Bernardo Silva’s favour, it seemed to be a case of just where the midfielder wanted to place his strike. However, Guaita exploded off his line and blocked a startled Silva, who was left scratching his head as to how Guaita had closed the space so quickly.

Palace weren’t going to just accept a second-half of being under relentless pressure and on 55 minutes Tosun came close to doubling his Palace tally in exquisite fashion. An excellent interception from Jaïro Riedewald set Ayew away on a driving counter-attack, which saw him play a neat one-two with Tosun before finding Zaha on the right.

Zaha dropped his shoulder to lose one City defender before clipping a perfectly weighted ball to find Tosun’s smart run between City’s two retreating defenders. The striker plucked the ball in impressive style from out of the air and fired a superb snapshot strike, which Ederson saved well. 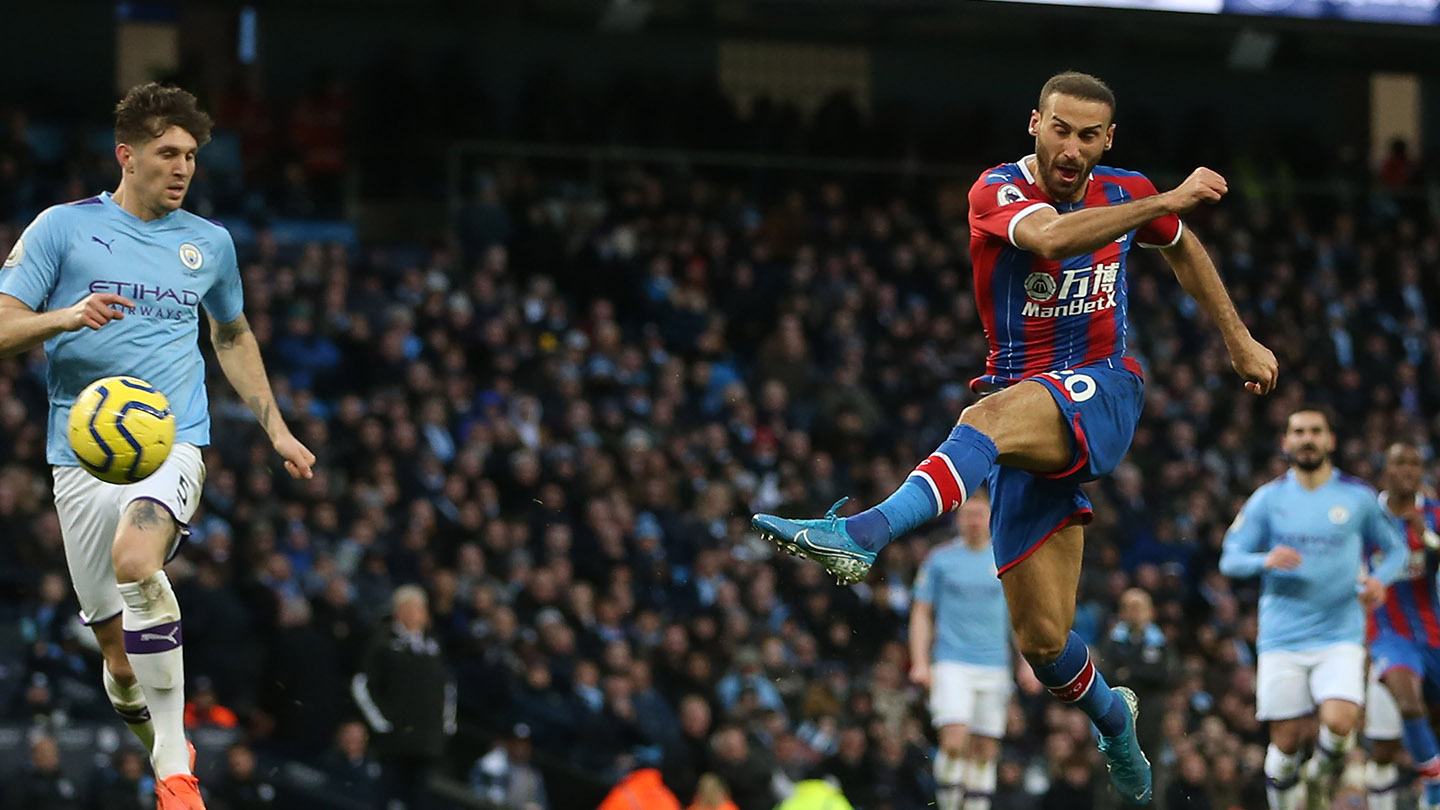 Guardiola threw on Gabriel Jesus and Riyad Mahrez as he looked to avoid back-to-back home defeats to Palace. And it looked like the Eagles’ efforts were going to fall just short in the 72nd minute when referee, Graham Scott, pointed to the spot for a handball on Jaïro Riedewald. 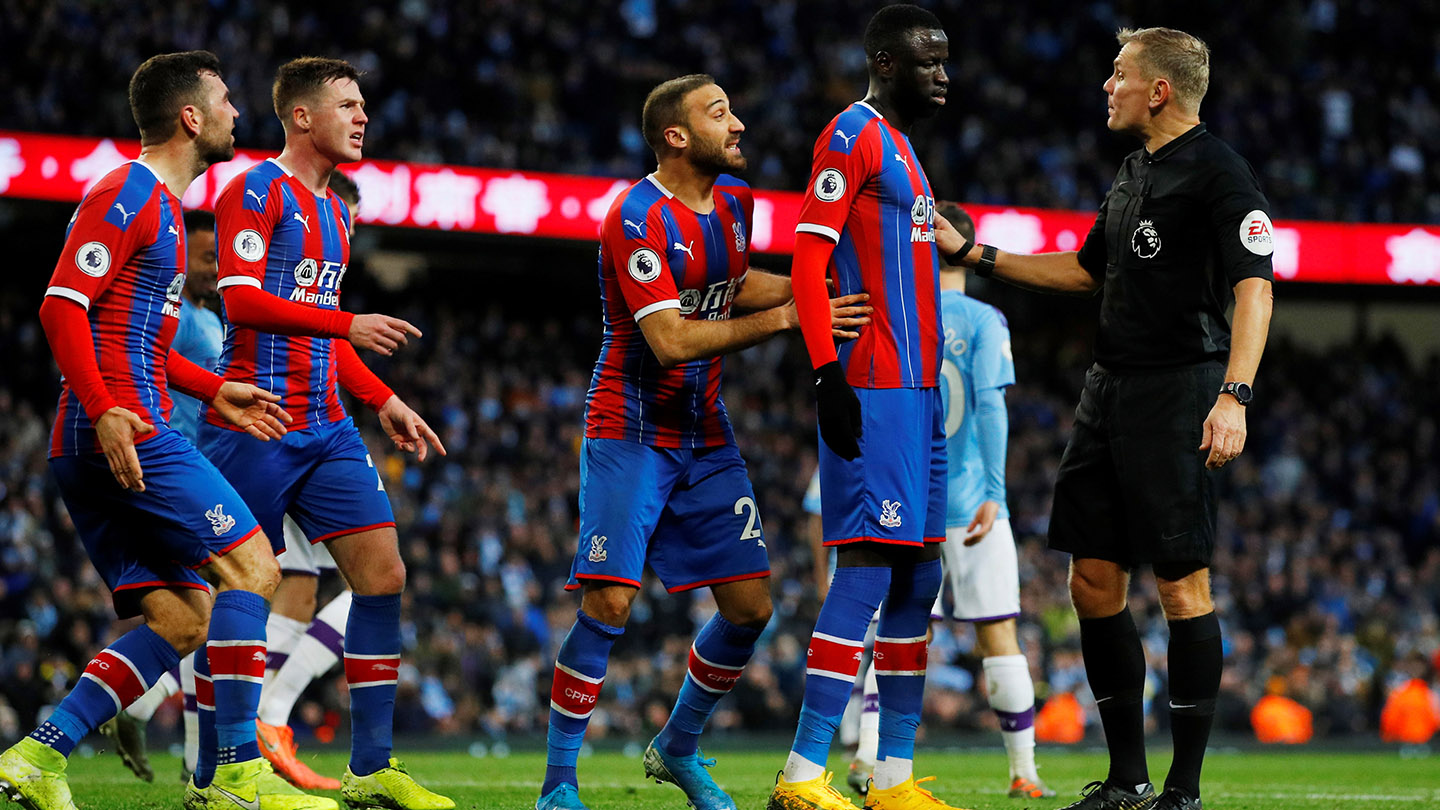 VAR intervened and correctly overturned the penalty decision due to the fact Riedewald had played the ball with his foot first before the unfortunate ricochet on to his hand.

City did eventually break the resilience of the south Londoners with the fresh legs of Jesus finding Agüero sliding in at the back post.

Agüero then looked to have broken Palace’s hearts with an 87th minute winner to turn the game on its head. However, up stepped Zaha, as he has done on so many occasions during his Eagles career.

A mesmerising run that tormented and twisted John Stones all over the place saw Zaha’s resulting cross end up in the back of the City net thanks to a diversion from Fernandinho. 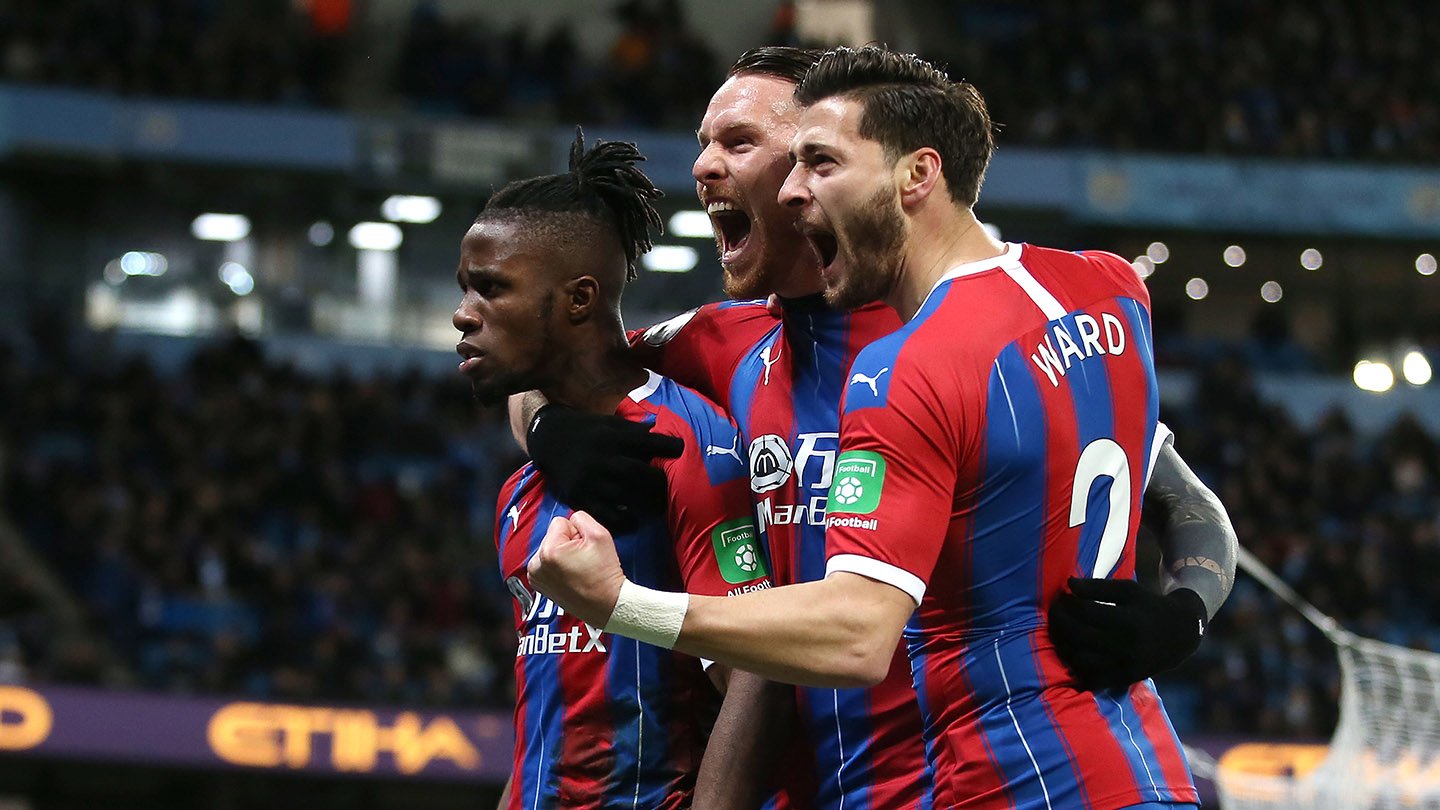 That late leveller was no more than Palace deserved in another hugely impressive performance at the Etihad Stadium, the home of the reigning Premier League champions.