Report: Palace fall to defeat at Leicester in tight contest

Palace fell to defeat at the King Power Stadium as Leicester City recovered from Wilfried Zaha's early goal to snatch a late victory.

The hosts’ boasted an abundance of attacking talent, and twice in the first five minutes Palace were given a reminder of how quickly they can carve an opening. Jamie Vardy was the runner on both occasions, first attempting to round Vicente Guaita but denied by the fingertips of the Spanish goalkeeper, then seeing the ball poked away by Cheikhou Kouyaté in the nick of time.

Vardy’s first attempt on goal came just ten minutes in, when Timothy Castagne’s cross found him at the far past after Iheanacho failed to make contact with his acrobatic effort. Joel Ward got out quickly to force Vardy to take the shot first time, and the attempt sailed over the crossbar.

Palace were patient, and waited for a chance to break forwards – and when it came, they pounced. Winning the ball back on the halfway line, Christian Benteke released Eberechi Eze with space to roam forwards. Eze’s pass found the advancing Wilfried Zaha in behind, who had timed his run perfectly to stay onside, and his effort was too powerful for Kasper Schmeichel to keep out.

It was a textbook breakaway goal from Roy Hodgson’s men, and saw Zaha hit double figures in the league this season, equalling his best tally in the competition with six games still to play. 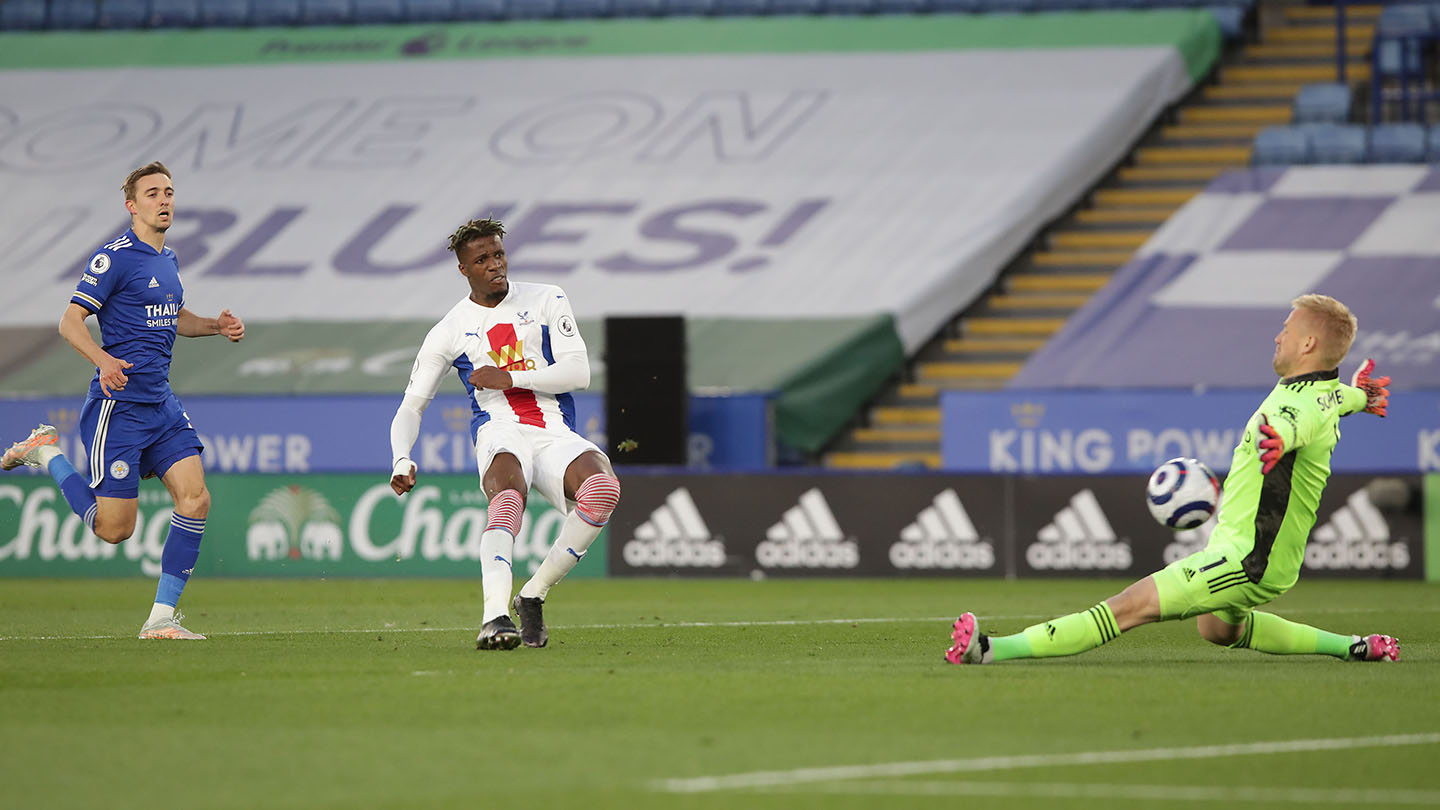 While Leicester continued to see more of the ball, Palace looked comfortable throughout the first period, with attempts at Guaita’s goal limited to the more speculative of efforts. Youri Tielemans saw his free-kick well read by the Palace ‘keeper, while Çaglar Söyüncü lashed a half-volley over the top after Jonny Evans’ knock-down.

Palace went in ahead at the break, but in the second-half Leicester showed more cutting edge. They were level just three minutes after the restart, through an unlikely source in Castagne. Iheanacho showed good strength to hold off Kouyaté in behind, and laid the ball off for the full-back who rifled into the top corner. Guaita had no chance.

Palace could have regained their lead moments later, as Jairo Riedewald bust through to go one-on-one with Schmeichel. As he looked set to take the shot, he cut the ball back for the oncoming Benteke, but Evans’ goal-saving challenge managed to smother the ball away to safety.

After Eze’s graceful run down the left-hand side the visitors earned a corner, but Benteke met Eze’s cross only to nod the ball straight into the hands of Schmeichel.

The hosts’ created chances of their own and Vardy had the ball in the back of the net after latching onto Iheanacho’s miscued effort, but before he could wheel away in celebration he was rightly flagged for offside.

Evans continued to impress at both ends, threatening from set-pieces and nodding just wide from a corner towards the far-post.

The chances kept coming. Vardy looking through on goal after a neat interchange with Iheanacho, but under pressure from Dann he was forced to shoot from a tight angle and dragged his shot wide. Moments later Tielemans had space on the edge of the area, curling the ball past the near post.

In the end it took a piece of individual brilliance to edge Leicester in front. Controlling the ball in a wide area under pressure from three defenders, Iheanacho took a touch inside and slammed a shot into the roof of the net – it was past Guaita before he could move.

Palace pushed for an equaliser, with Benteke rising highest to meet a ball into the box but heading inches wide, although that left space in behind for Leicester to break forwards look for a third. Guaita prevented Pérez from making it three - a scoreline that would have been an unfair reflection on the visitors - and a tight contest finished with just a single goal to separate the sides.