The hosts saw more of the ball in the opening few moments, with Spurs’ midfield duo of Harry Winks and Pierre-Emile Hojbjerg looking to get the dangerous front four of Harry Kane, Lucas Moura, Son Heung-Min and Gareth Bale as involved as possible.

It was Son who had the first sight at goal. It was a chance created by the neat footwork of Bale, who made space before clipping a cross towards the South Korean, whose headed effort from close-range was straight at Vicente Guaita.

Palace looked for opportunities on the break, with Christian Benteke and Jordan Ayew working hard to limit the time Spurs had on the ball. When they ventured forwards Palace looked capable of threatening, with Benteke almost set through by Andros Townsend.

But it was Spurs who opened the scoring. Winning the ball back high upfield, the attackers in white suddenly outnumbered the Palace defence, as Lucas fed Kane on the left. Advancing on goal, he found his angle narrowed by Guaita, but looked up to see Bale in space at the far post; the ball was slipped across for the Welshman to tap home.

Bale’s real threat was as a provider, his deliveries from the left constantly dangerous. He found Sergio Reguilon advancing towards the far post, but the full-back got his attempted scissor-kick all wrong and sliced the ball wide.

Palace grew into the game as the half progressed, winning a succession of corners after promising attacking moves, but the resultant deliveries failed to trouble the Spurs defence.

But Palace’s increasing aggression soon paid dividends, and in stoppage time they were level. Picking up the ball on the left, Luka Milivojevic floated a beautiful cross into the danger area. Benteke rose highest six-yards out, and powered a header past a helpless Hugo Lloris.

The Eagles were boosted after the restart by the return of Wilfried Zaha, who replaced Eberechi Eze. 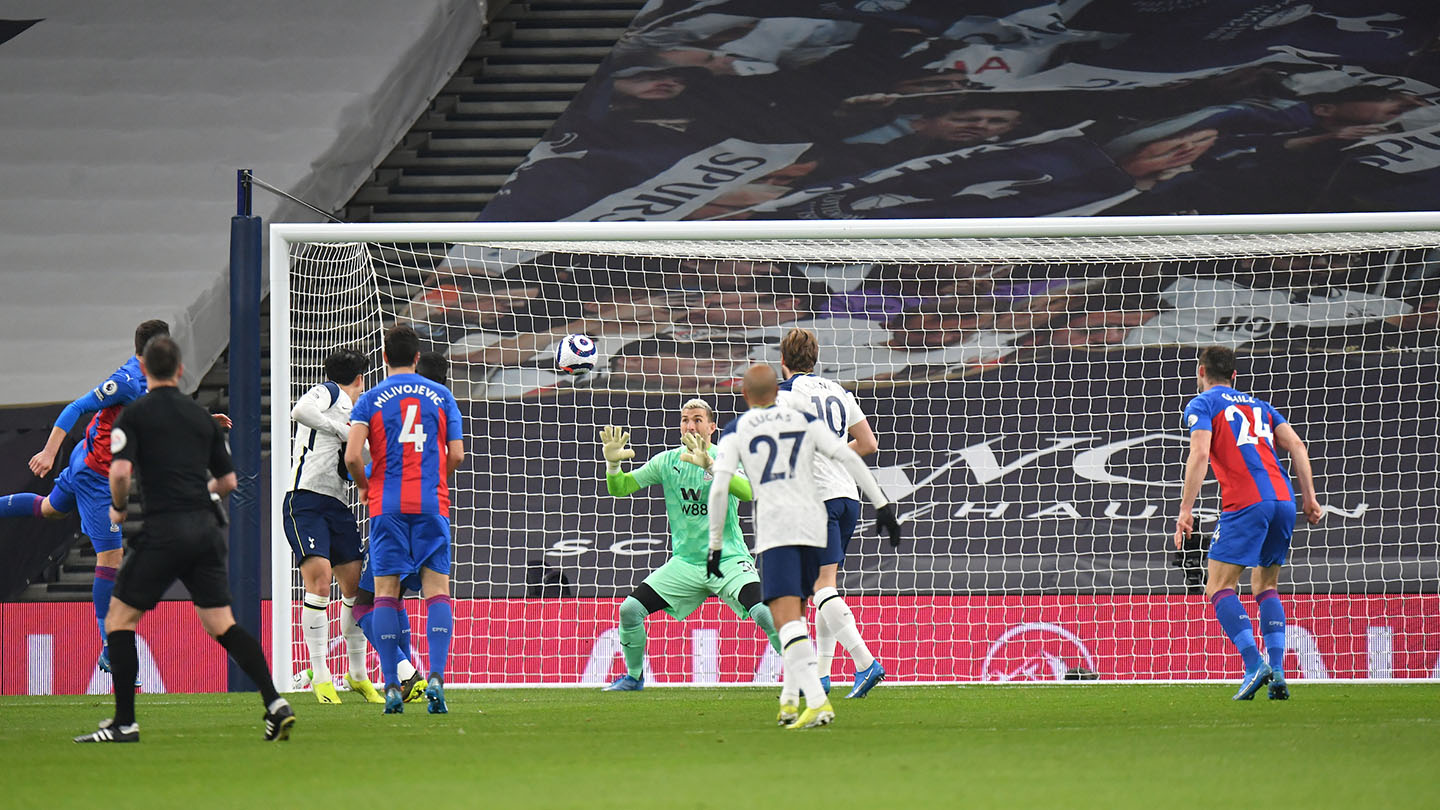 However Spurs were soon ahead once again. The move was started and finished by Bale, who spread the ball out to the left before heading into the area. Reguilon’s cross was too deep, but was headed back across goal by Kane for Bale to head home from close-range.

Moments later they doubled their lead, through a strike of the highest quality. Receiving the ball from Matt Doherty on the edge of the area, Kane unleashed a curling first-time effort that nestled in the top corner, giving Guaita no chance.

Palace refused to give in, and continued to push forwards when given the opportunity. After tenacious work from Jairo Riedewald in midfield, Ayew found Zaha in space on the edge of the area. His did well to get his shot away as he lost balance, and saw his effort beat Lloris before striking the base of the post.

Kane added a fourth with quarter of an hour remaining, tapping in from Son’s headed pass after Erik Lamela’s cross had sent them in behind, and giving the visitors no way back into the contest.

It proved a tough night for Palace and a deserved win for Spurs, as the Eagles three game unbeaten run in the Premier League came to an end.