Crystal Palace were undone by an in-form Everton this afternoon at Goodison Park as Roy Hodgson's men showed periods of attacking promise only to fall to a harsh 3-1 scoreline.

This afternoon’s clash began at a surprisingly high tempo for an early kick-off between two mid-table sides, and after a Lucas Digne free-kick which Vicente Guaita pushed to safety after five minutes, Crystal Palace and Everton settled in to the style the game’s first-half would maintain.

But it was a style filled with fleeting opportunity and, had Palace’s final balls enjoyed better luck, Hodgson’s men may have benefitted from an early lead. 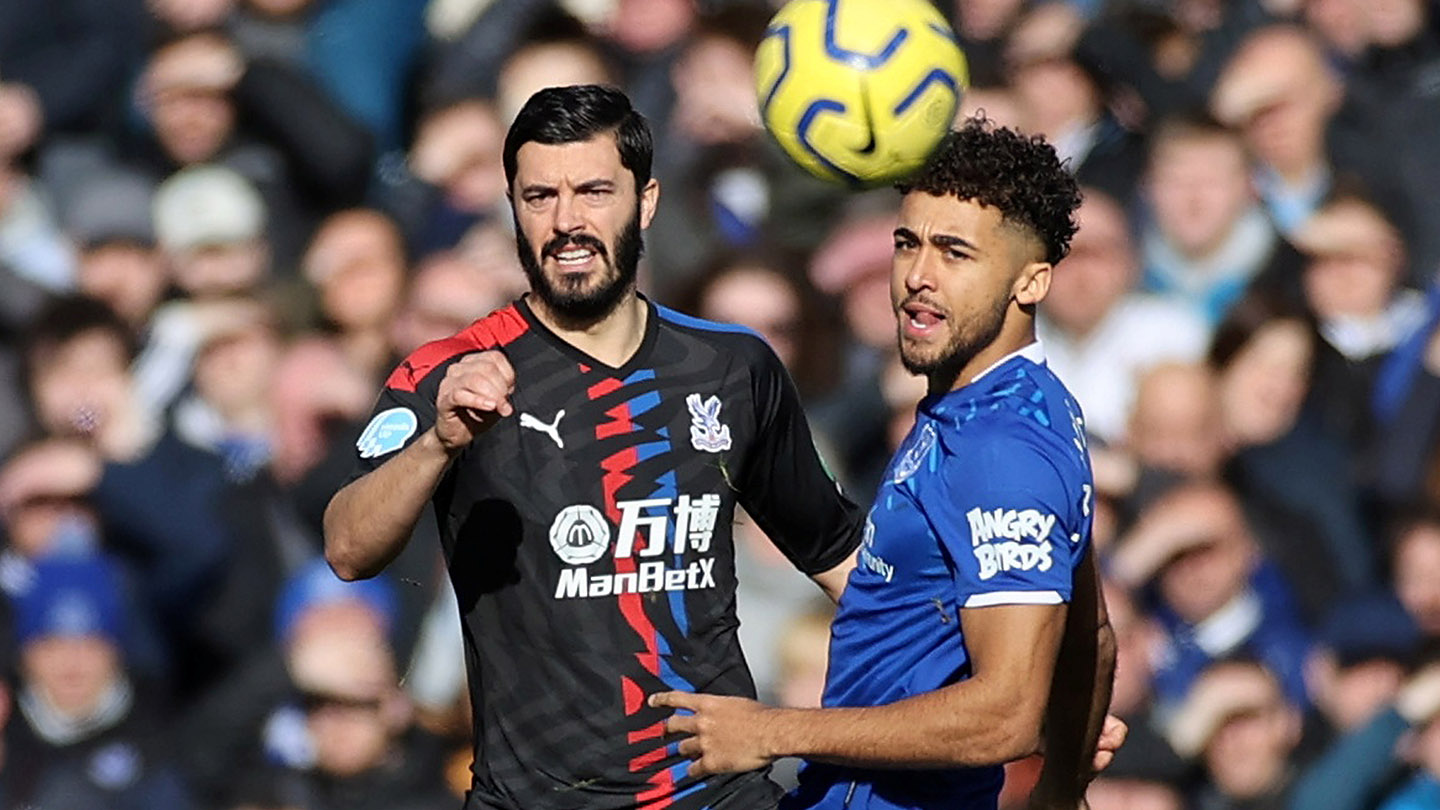 The Eagles sat fairly compact in their own half, with Everton probing from some distance and Palace retaliating along the channels. In one such move, Christian Benteke surged forward to establish the visitors in the Toffees’ third and won a corner. From the resulting cluster, Patrick van Aanholt cannoned the ball off Jordan Pickford’s near-post, but the Dutchman was left to watch as his early effort ricocheted to the shirts in blue who turned it against the advertising boards.

The south Londoners enjoyed several marauds into the opposition danger zones, but it was the home side who would celebrate first when Bernard, given space at the centre of Palace’s box, volleyed home from 10 yards on the end of a looping Theo Walcott cross.

No sooner had Walcott assisted his team’s climb into the ascendancy did the winger suffer a familiar fate: leaving the field injured just minutes after displaying his talent along the flanks.

Having fired themselves ahead, Everton seemed unperturbed by Walcott's removal, and Carlo Ancelotti’s in-form side kept the Palace backguard alert through a dominant Toffees spell. 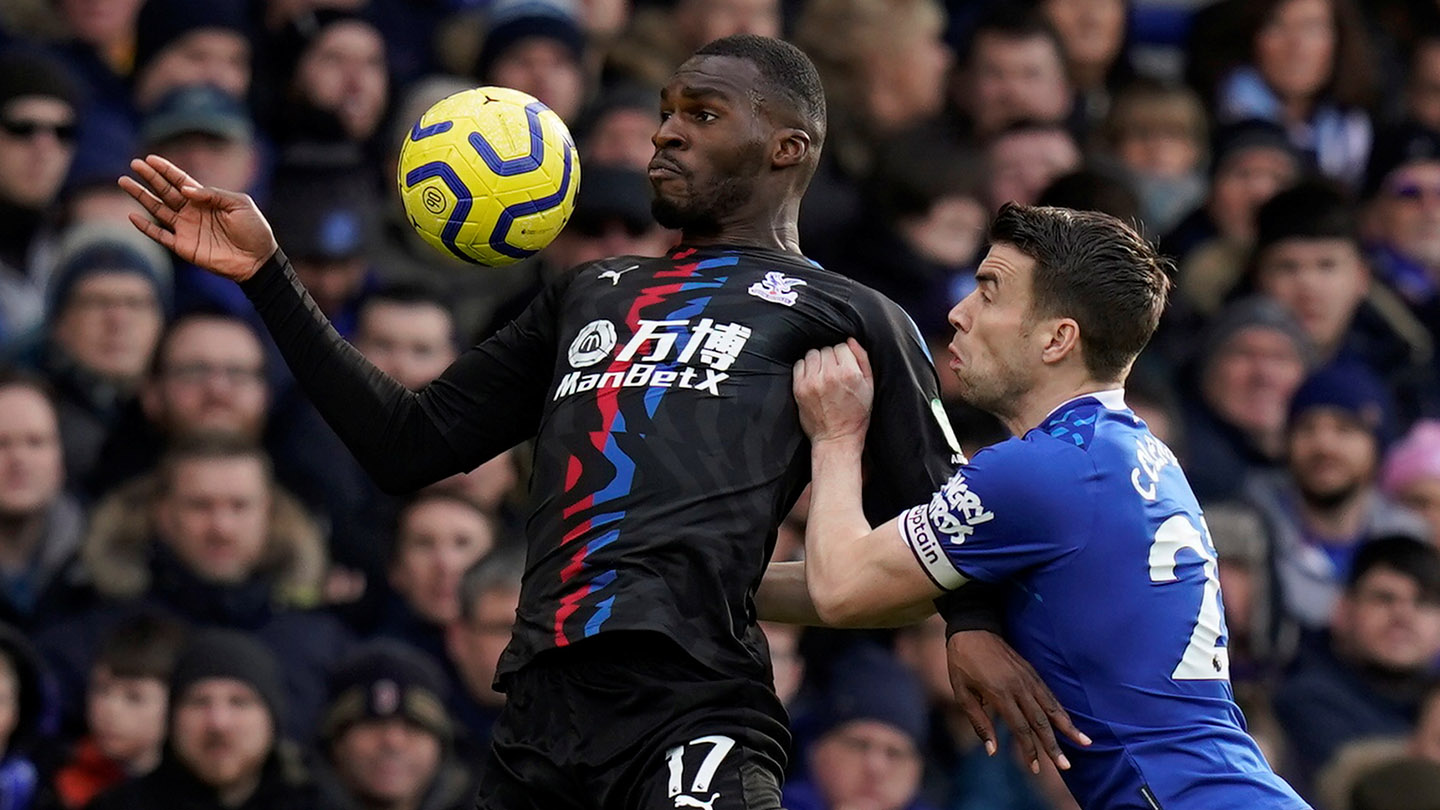 Dominance exchanged hands repeatedly throughout the half, however, and Palace continued to display encouraging signs - though, frustratingly, they continued to miscue chances, too.

Jordan Ayew, having swapped wings with Wilfried Zaha, appeared bright and played a series of finely drilled balls towards Benteke’s head. After one such pass, the Belgian cutely knocked into James McArthur’s path, but the No.18 could only strike over the bar.

The Eagles were similarly gravelled barely two minutes later when Zaha doggedly followed an overhit through-ball and dispossessed the onrushing Pickford. With the ball spinning loose, Palace were dealt a fortunate hand, but the home side’s defence were able to save themselves - legally sending Zaha sprawling to the turf. 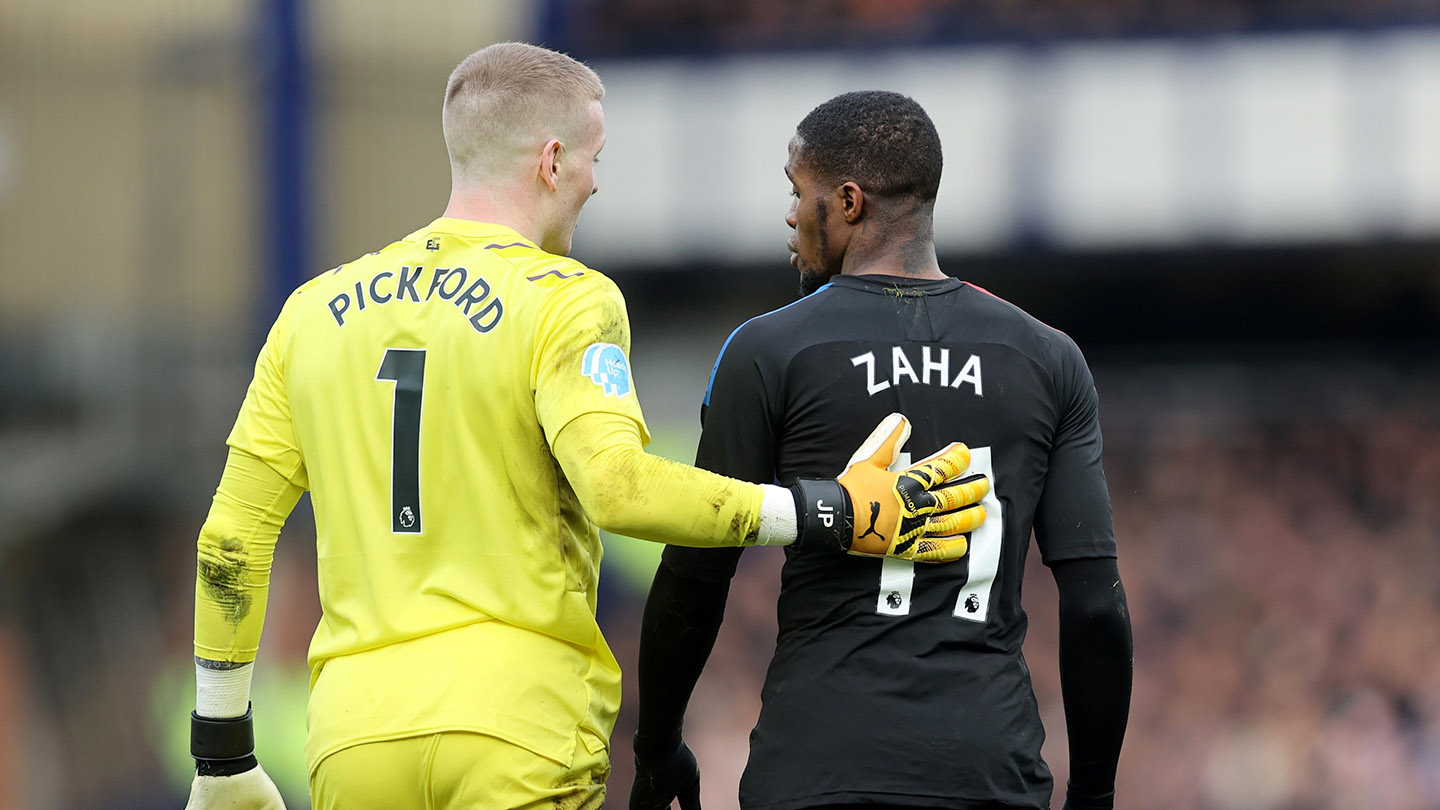 Returning for the second-half with a more aggressive front three spearheading attacks, Palace’s improved performance was marked by their improved finishing.

With Zaha, Ayew and Benteke catching the Everton backline off-guard with their frenetic pressing, Palace were able to pull themselves level: Zaha fed Benteke with pinpoint accuracy and the Belgian, celebrating his 100th Premier League game in red and blue, struck the ball hard under Pickford’s body to make the game justifiably equal.

The Eagles had stepped up their game markedly and repeatedly unnerved their hosts, but Hodgson’s men were cruelly cut down by their own tactic deployed against them. Bursting free on the counter-attack, Richarlison scored against the run of play by burying well into Guaita’s bottom left corner from the edge of Palace’s box. 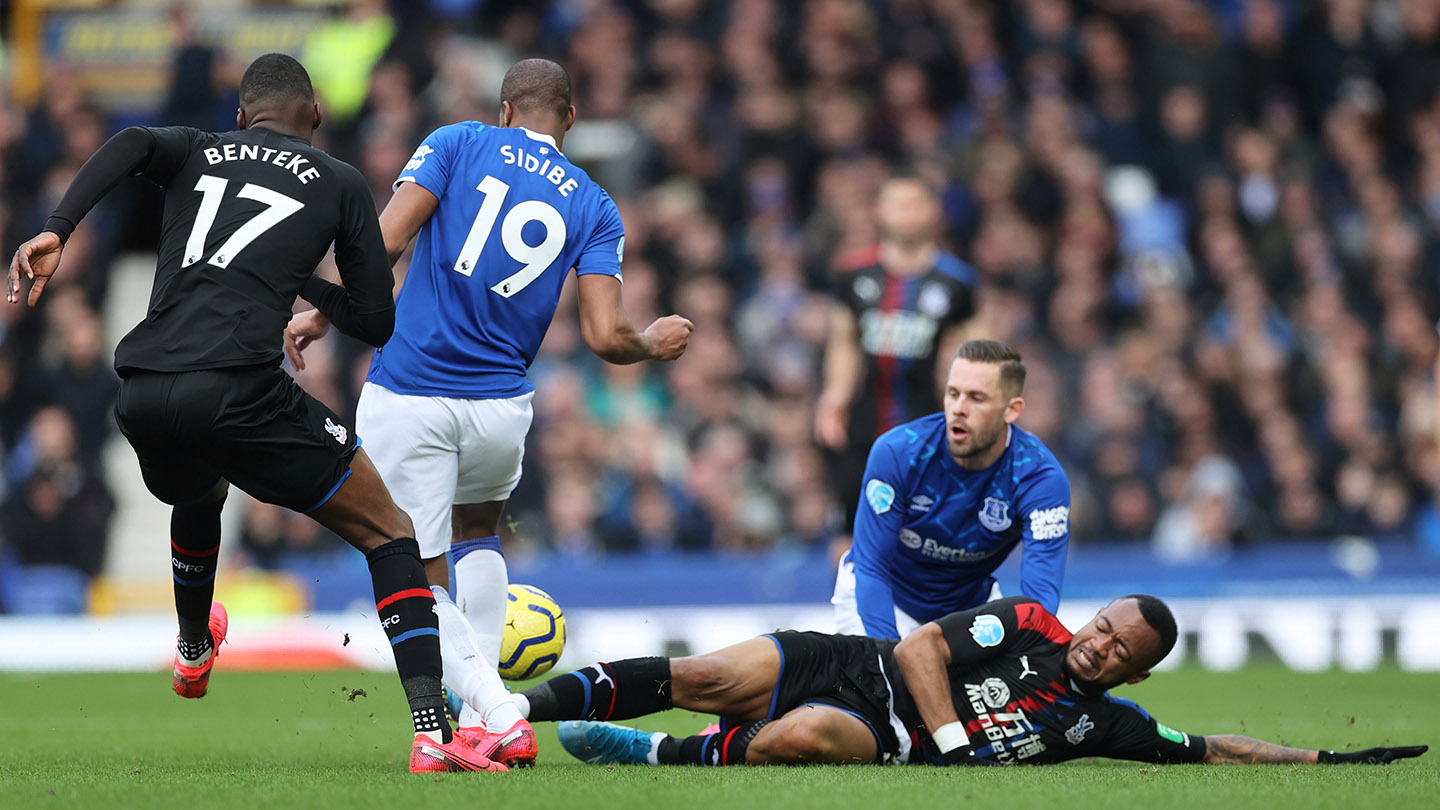 The Eagles were trailing for the second time of the afternoon and almost reenacted their earlier equaliser when Benteke headed from point-blank range towards Pickford’s net, but this time the England shot stopper won the battle and made an astonishing reaction save.

The game continued to burn brightly as the Merseyside air cooled, and Guaita was forced into cat-like action to deny Gylfi Sigurdsson on the end of an unchallenged dance into the box.

Both sides had turned their tame first-half pushes into solid second-half opportunities.

Yet again, dominance changed hands throughout the second-half, with Everton enjoying the lion’s share of the offensive passages between the 60th and 70th minute after Palace’s energetic opening to the second 45. 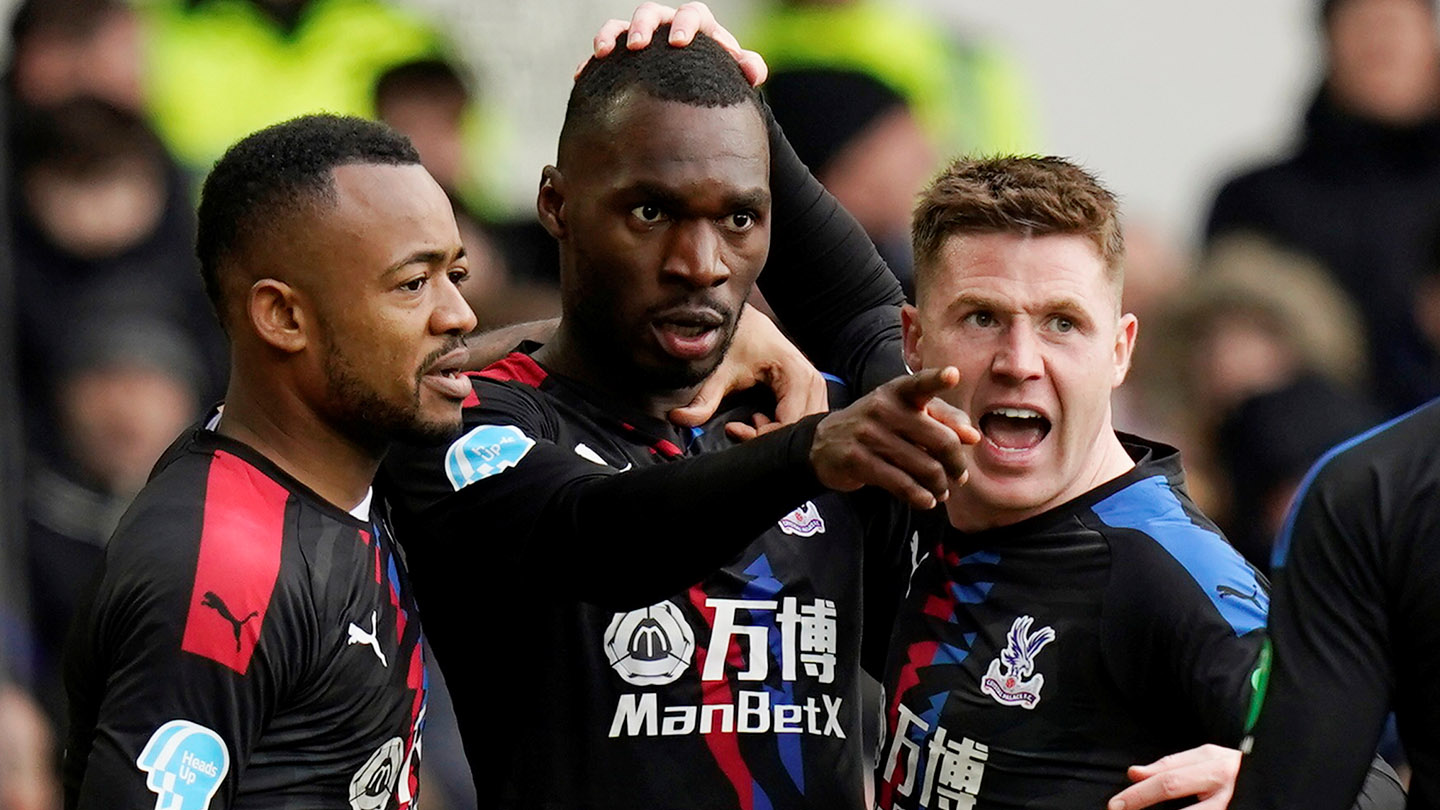 Indeed, Everton would be the side to end the game in high spirits after Dominic Calvert-Lewin prodded home from five yards while reacting to Richarlison’s post-striking header. Minutes later, the forward faced a near mirror-image of the chance, but this time he spooned the ball high from Guaita’s block. 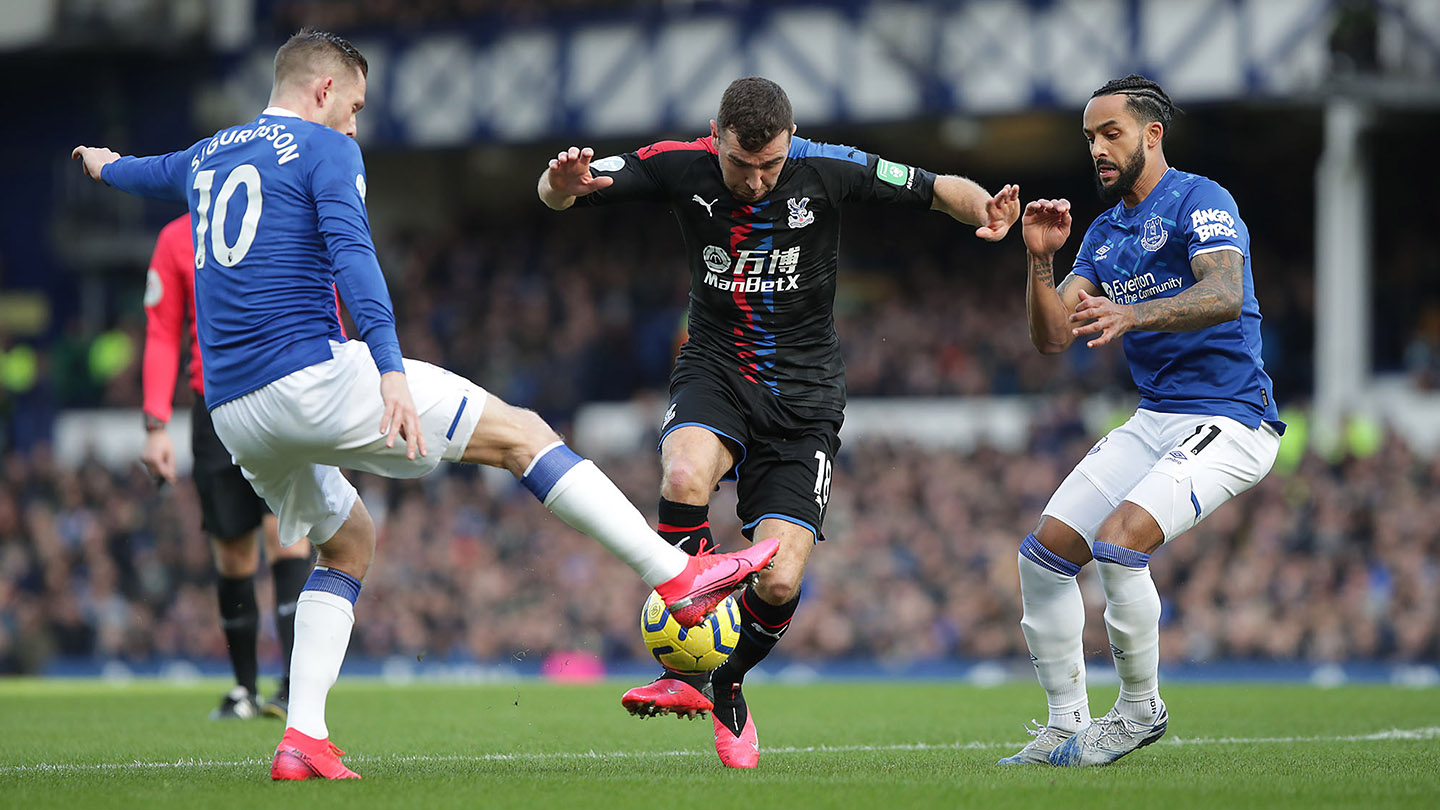 By full-time, the Eagles were undone by a harsh scoreline reflecting unjustly on their persistent efforts.

Full highlights of this game will be available for free via Palace TV alongside post-match reactions and both managers' press conferences. View it all by clicking here or 'Palace TV' in the official app.