After losing two of their back four to a red card and injury respectively, a battle-scarred Crystal Palace defied the odds for 70 minutes tonight to overcome a visiting AFC Bournemouth via the determined boots of Jeffrey Schlupp.

The evening started in typical fashion for a fixture pitting teams together after just two days’ out of action and both sides seemed reticent in their attacks. The visiting Cherries appeared to threaten most with a series of half-chances from the wings while Palace found themselves frustratingly crowded out when the ball fell in front of the Whitehorse Lane.

The course of the clash was redirected just 20 minutes in, however, and Palace were forced into reactionary defence when Mamadou Sakho saw the red of Anthony Taylor’s card for a foul on Adam Smith. His return to a well known partnership with James Tomkins after nine months cruelly ended in front of aghast teammates - and Palace were cut down to just one natural centre-back despite boasting five in their first-team squad. 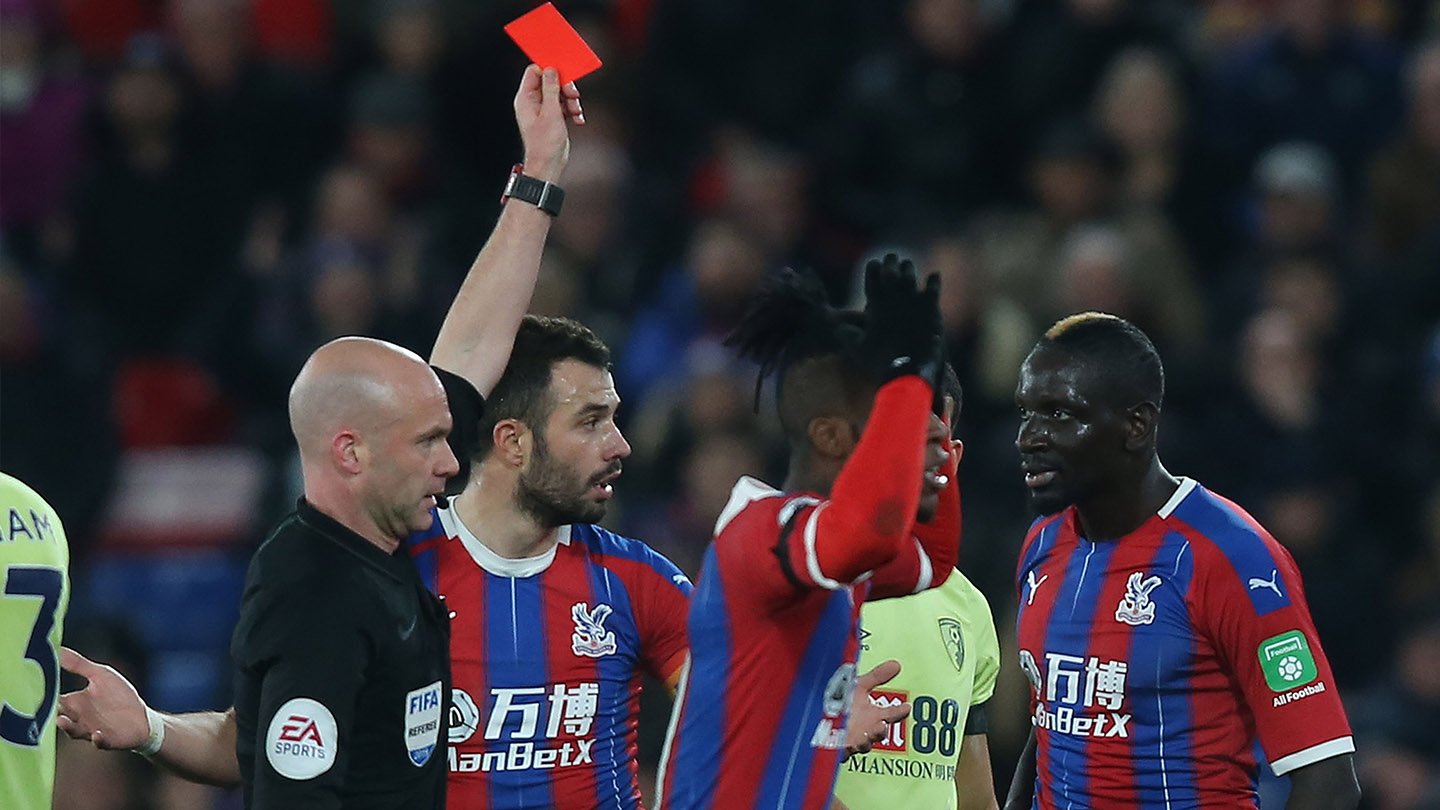 With Cheikhou Kouyate slotting in to the back four as he does for Senegal, Bournemouth saw their first notable chance on target fall into Vicente Guaita’s arms after a close-range shot from Chris Mepham.

Minutes later, further trouble struck for the hosts as Patrick van Aanholt limped off the pitch and down the tunnel - Schlupp replacing him at left-back after a brief James McArthur cameo.

Despite the hamstringing inflicted on Palace, the home side appeared in control and on the offensive, perhaps instructed to claim their advantage before the effect of a missing man took its toll. 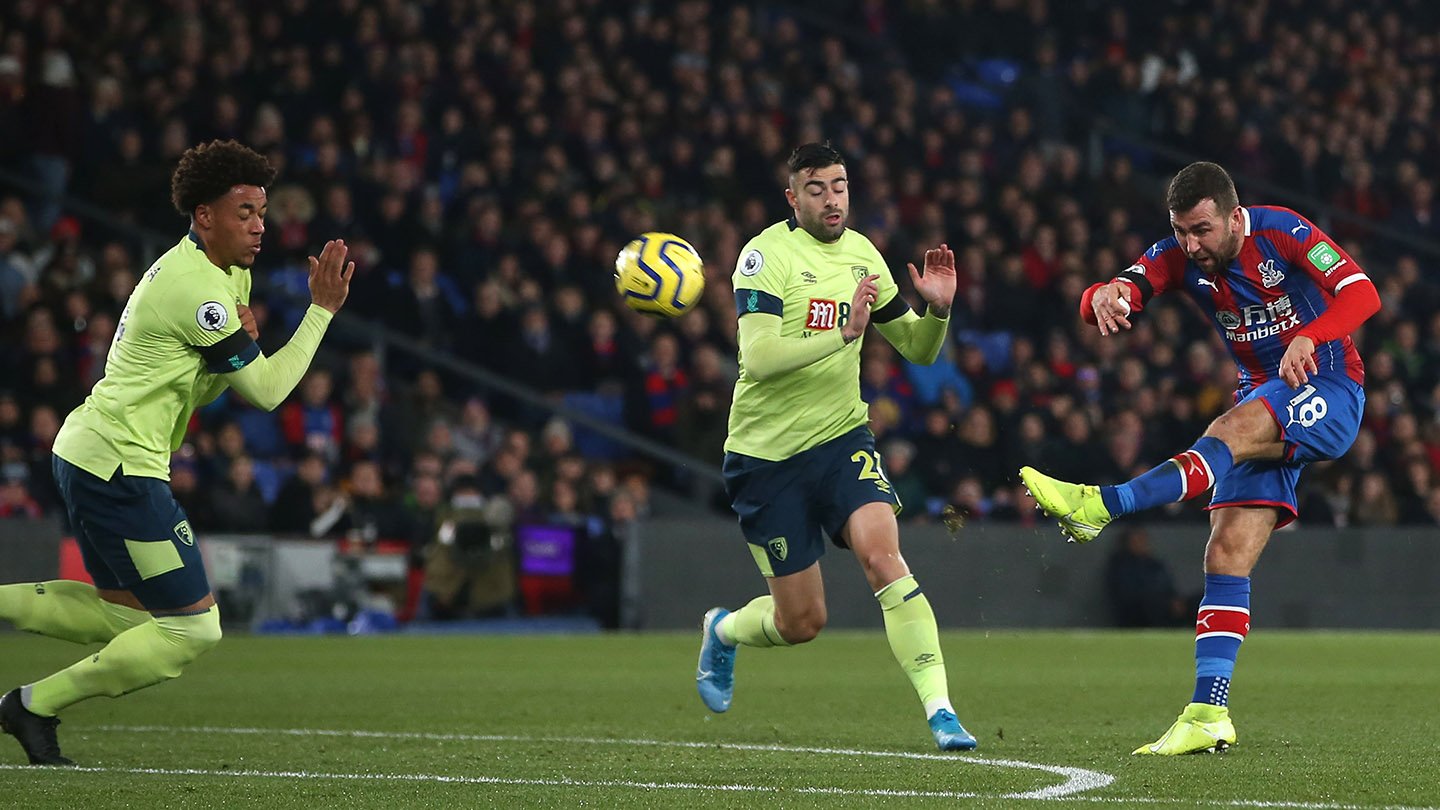 That said, Bournemouth continued to enjoy their own tame chances and Philip Billing stroked a soft effort into Guaita’s arms as Dominic Solanke laid the Danish off on the edge of the box.

A defensive change at the break saw James McCarthy take the place of Andros Townsend but Bournemouth enjoyed the second-half’s first chance when Harry Wilson played a fine cross-box pass towards Callum Wilson. Martin Kelly, however, stretched out a leg, and astutely intercepted the ball just inches before Wilson turned it into a near-empty net. 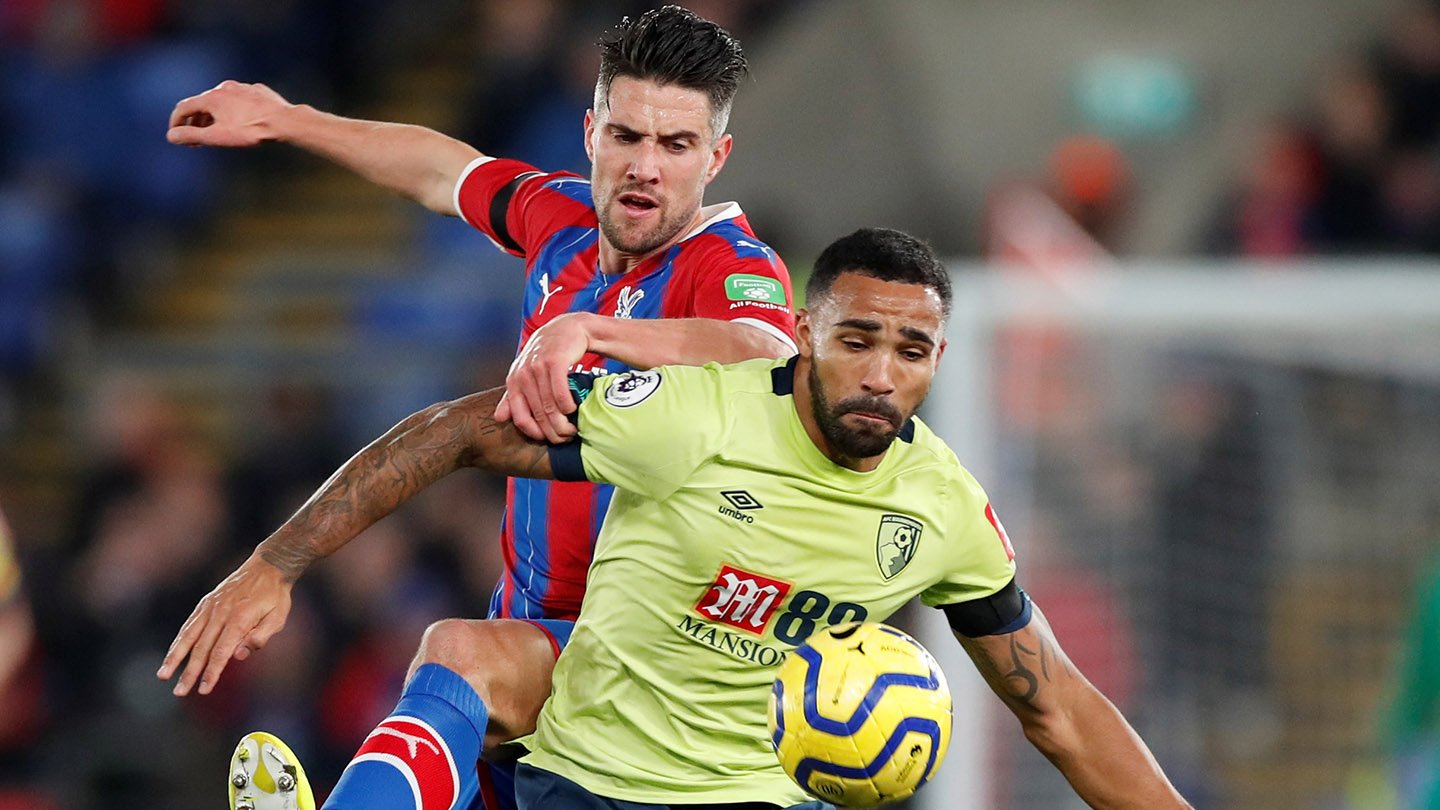 The Cherries then failed to create much else in front of goal and the game settled back to its rather languid first-half pace. A pair of substitutions and later a pair of bookings for fouls on Wilfried Zaha was Bournemouth's approach to liven up the match, but Palace came closest to breaking the deadlock afterwards.

Zaha - who caused the visitors trouble throughout the night - routinely burst his way along the left-wing but, upon finding space to plant a cross, found his testing ball unmet by anyone in red and blue. The Ivorian then hit the turf minutes later, but was adjudged to have tripped on the back of Mepham’s ankle.

With frustration clear to see for all in SE25, a close-fought game became scrappy, and Taylor handed out four yellow cards in almost as many minutes. 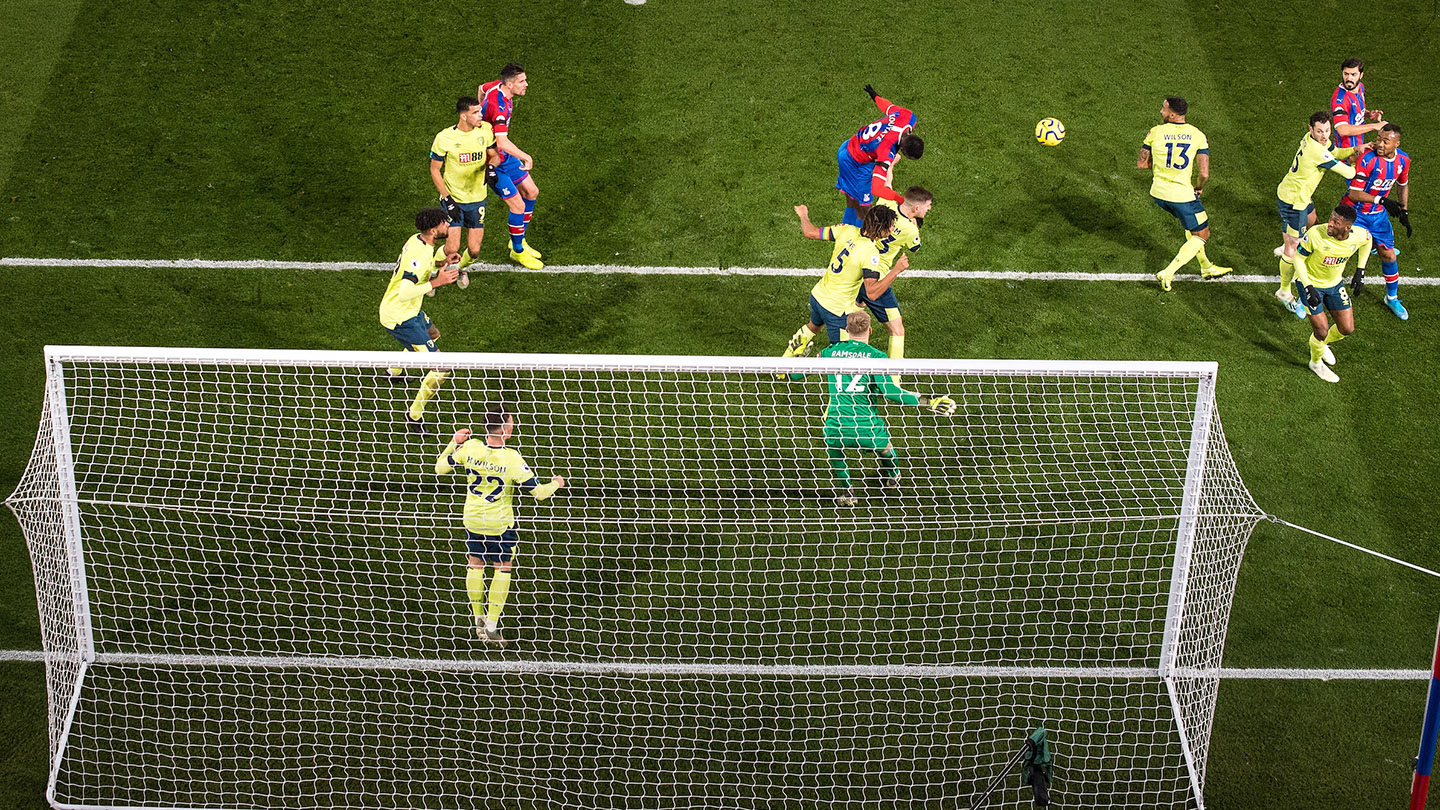 The Eagles were determined, though, and Jordan Ayew epitomised the home side’s resolve with a run that saw him jink through player after player before Jeffrey Schlupp replicated his countryman’s drive.

Schlupp, head down and legs working overtime, burst from the halfway line and towards the Bournemouth box. On the end of such a fine push, the left-back took aim and fired with devastating effect, forcing the ball beyond Aaron Ramsdale. 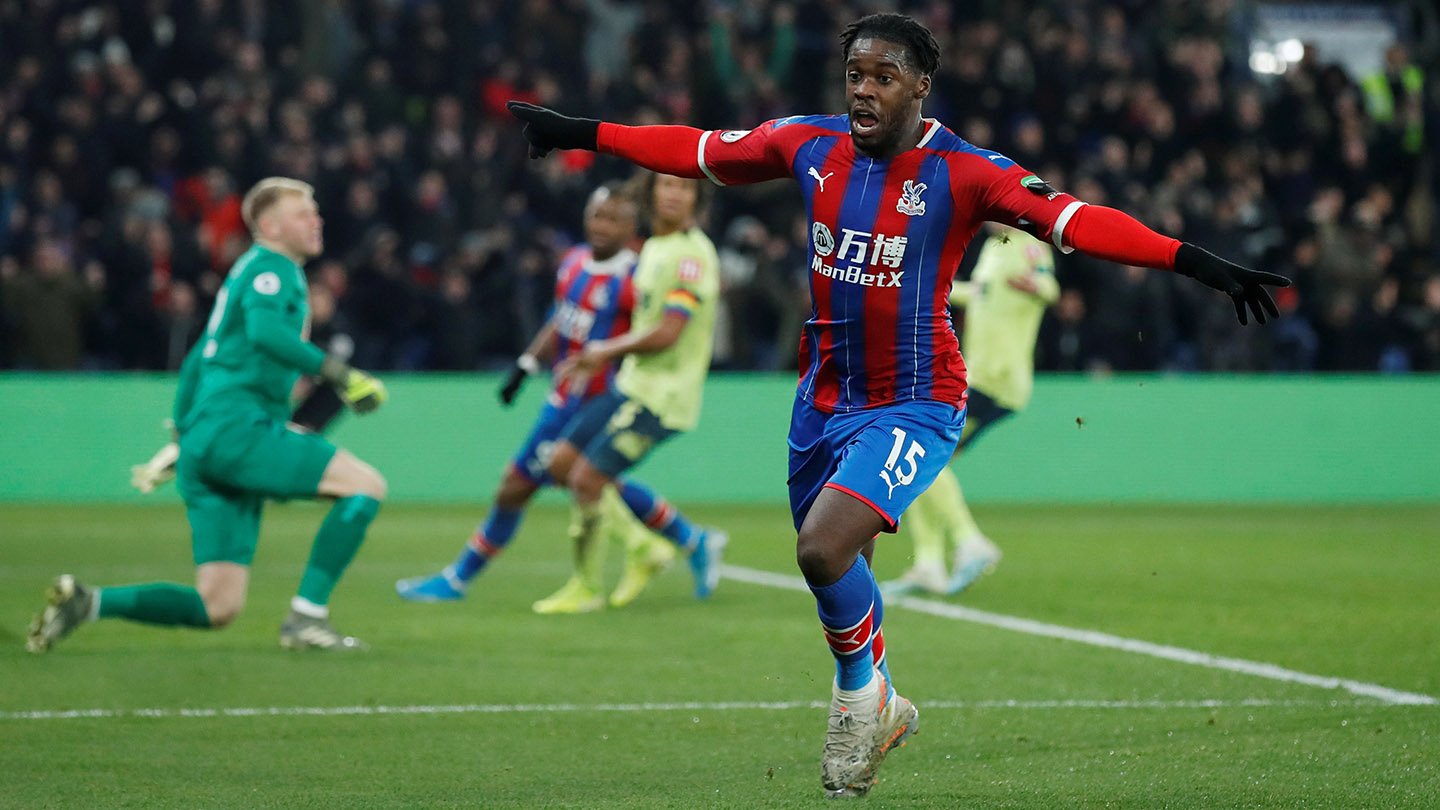 The evening's drama was far from ending as the minutes turned to seconds and Guaita was forced into match-winning action to block Lerma's long-range effort from wriggling into his netting.

Ignited by a succession of alarming close calls, Schlupp sought to reenact his earlier heroics as he danced into the box, but having opted to cross rather than shoot, found his run this time come to no fruition.

At full-time in the first game screened by Amazon, Crystal Palace had delivered.

Make sure to keep an eye on Palace TV for full match highlights and reaction from the team - all for free! Either click here or 'Palace TV' in the official Palace app.