Return to Selhurst ends in narrow defeat for Palace

Relief at Wilfried Zaha being passed fit, Glad All Over echoing proudly around the ground and the all four stands dressed in a sea of red and blue: for a moment, it felt like a normal matchday for Crystal Palace Football Club.

Come the first full-time whistle in a Selhurst Park without fans, it was anything but a normal matchday for the Eagles, with Burnley overcoming Palace for the first time in five Premier League matches, winning 1-0 thanks to a Ben Mee header. 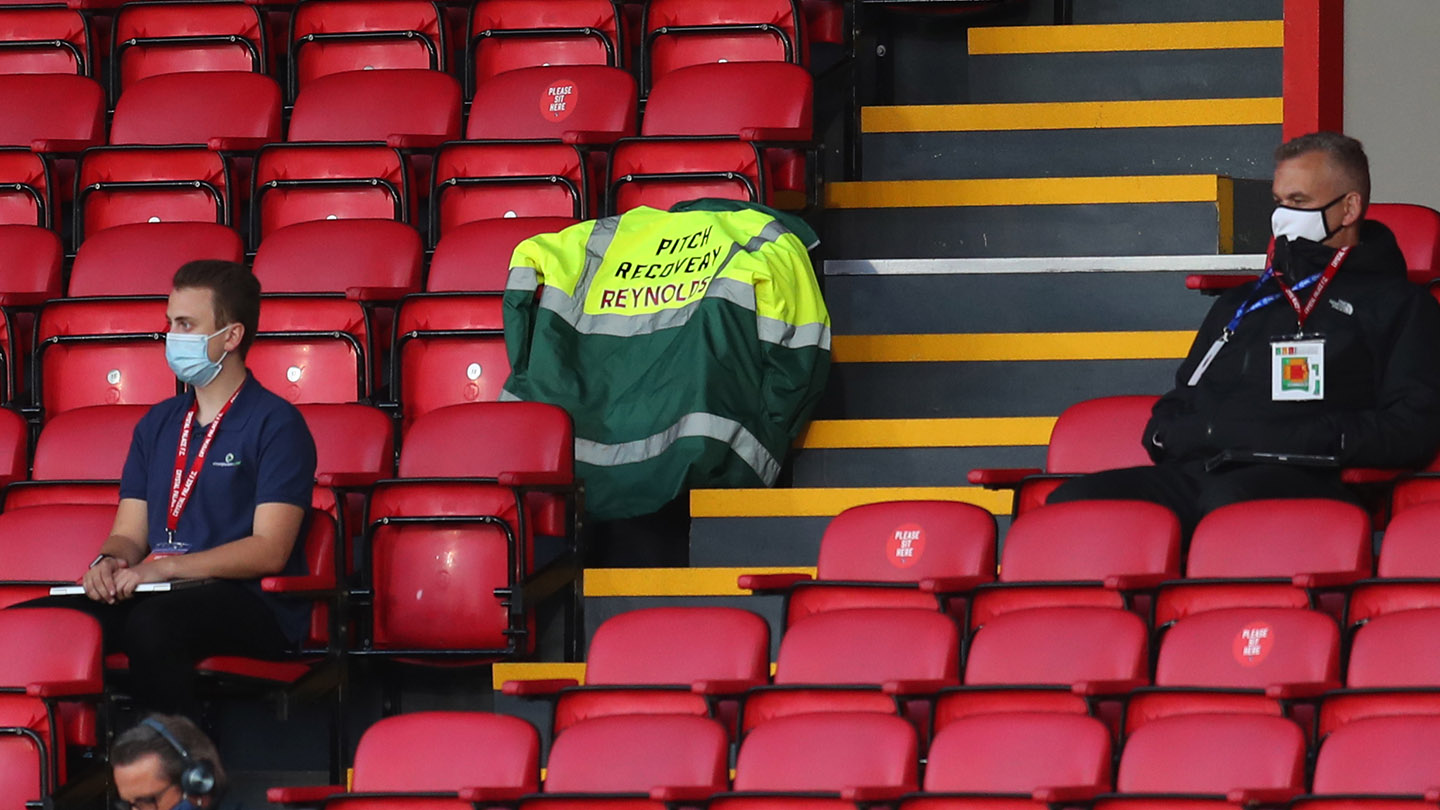 Burnley dominated possession in the opening 45 minutes, with Jack Cork’s dipping header inside the first minute – that eventually dropped behind Vicente Guaita’s goal - signalling the intentions of Sean Dyche’s side.

Like Palace have done so regularly, though, they remained patient, absorbed the pressure and waited for their moment to cutely link-up in the final third.

It took eight minutes for that scenario to arrive for the first time, with Wilfried Zaha’s incisive pass finding James McArthur inside the box. The midfielder controlled well before teeing up Jordan Ayew to fire across the box to Patrick van Aanholt. 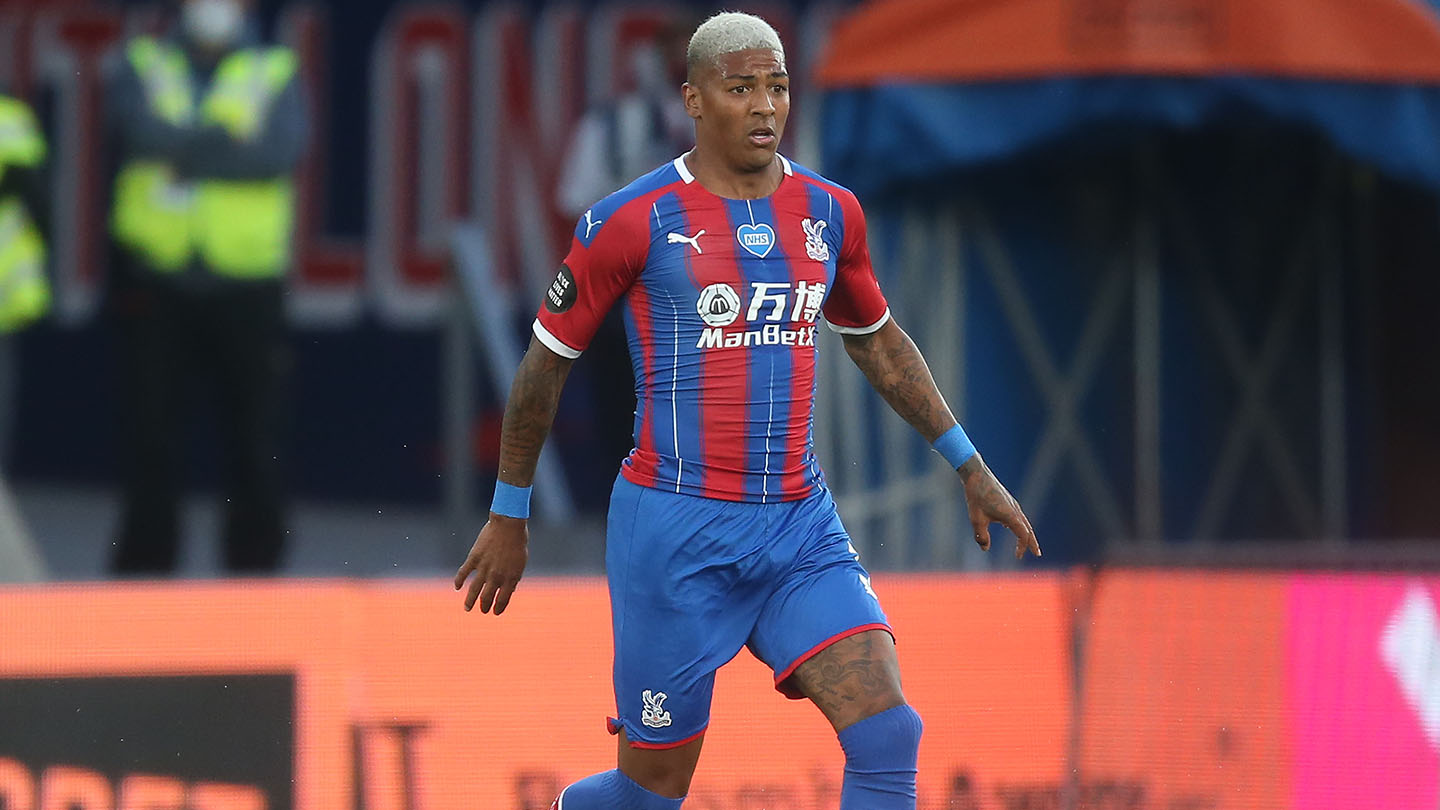 The ball wasn’t quite as Ayew would’ve wanted, selling his teammate just short, but the passage of play highlighted the intricacies of Palace’s build-up and how quickly Roy Hodgson’s side can turn it on.

Next it was Luka Milivojević to try and test Nick Pope for the first time, with the captain nearly mastering time travel and returning to the Vitality Stadium, with the expectation, position and run-up reminiscent of his superb goal against the Cherries.

This time it wasn’t meant to be. But one player who had picked up where he had left off against Bournemouth was Scott Dann.

The Clarets’ sustained pressure, although not requiring a herculean effort from Palace’s rear-guard, saw Dann make several clever interventions throughout the first-half, using his experience to smartly disrupt and frustrate Burnley every time they looked to up the pressure.

If Palace were going to fall behind, though, then it was more than likely going to involve Dwight McNeil – playing in a free roam No.10 role behind Matej Vydra rather than his usual position on the wing. 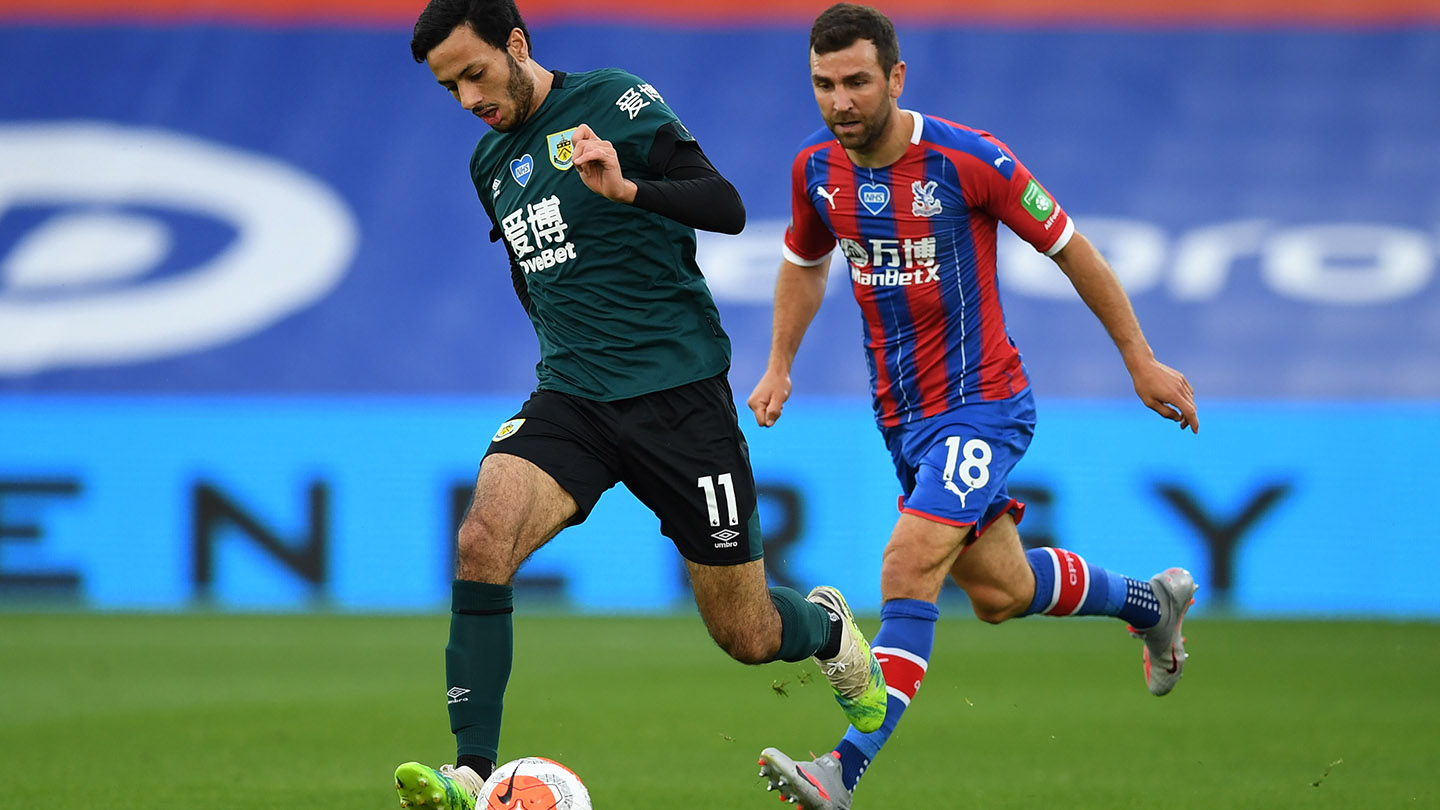 The Burnley man first went close from a Josh Brownhill corner, which initially found Van Aanholt on the line, however, the left-back’s hurried clearance deflected off Milivojević directly in front of him, causing a panic in Palace’s box.

A further scrambled away clearance found McNeil just inside the edge of the box but the England Under-21 international’s strike was rising above Guaita’s goal before it had reached Palace’s No.31.

Moments later McNeil was again involved, this time collecting a wayward Milivojević pass, and driving at Gary Cahill and Dann with James McArthur snapping at his heels. The pressure of McArthur and the fast-approaching resolute Palace centre-back pairing forced McNeil to hurry his shot: a tame curled effort right down the centre of Guaita’s goal.

On 36 minutes, Palace’s best chance of the first-half landed on the head of McArthur, however, the midfielder will be disappointed with the connection he made from a deep, pinpoint cross from Joel Ward. 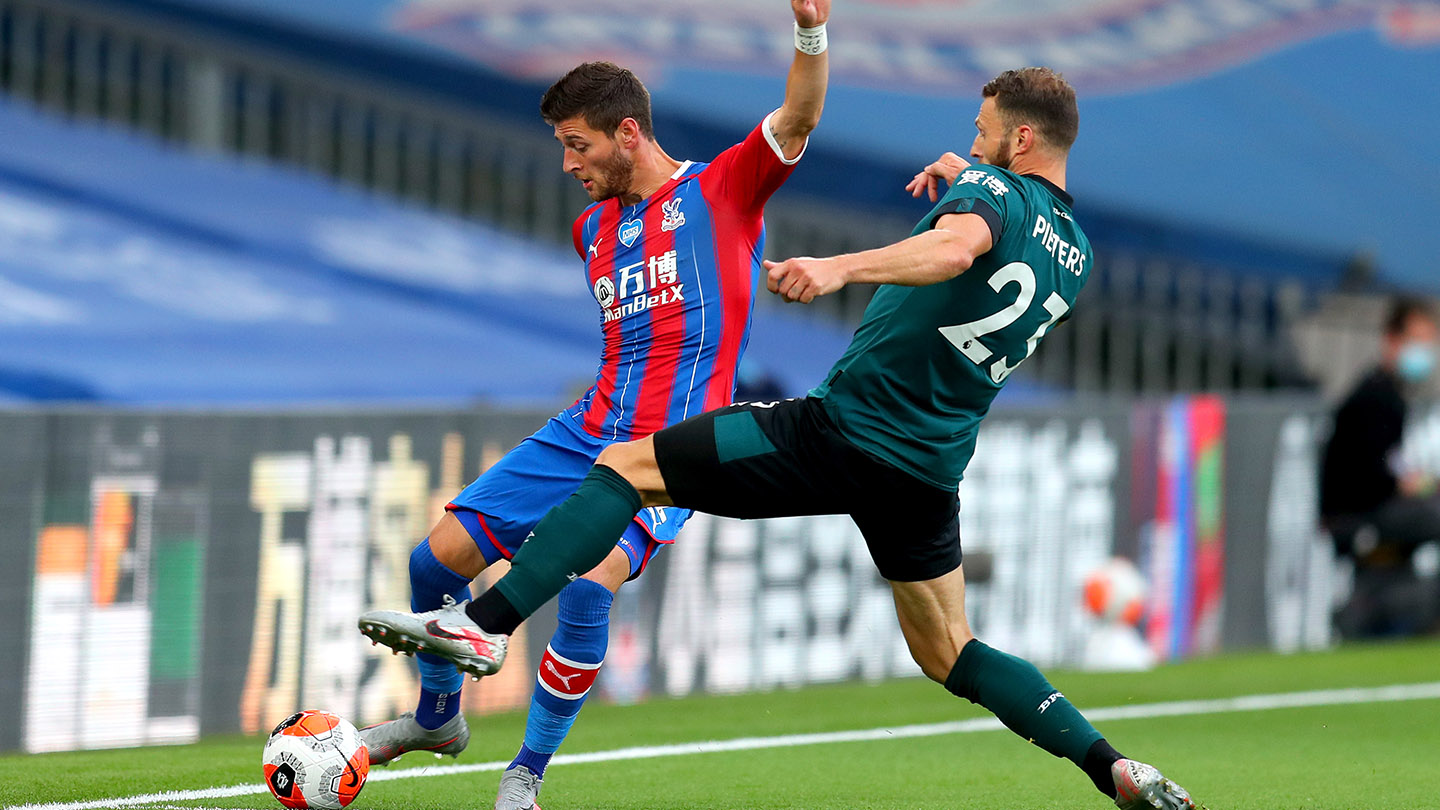 James McCarthy was handed his first taste of behind closed doors football at Selhurst Park, replacing Kouyate at half-time. That change in personnel, plus Hodgson’s half-time team talk, saw a different Palace emerge, in a role reversal of the first-half, Palace were enjoying the lion’s share of possession.

It looked like the tweak was going to pay dividends early into the second-half, when a superb piece of awareness from Ayew resulted in Cahill picking up his teammate’s backheel inside the penalty box.

Despite being empty, you could still feel the collective inhaling of breath from all four stands around Selhurst Park when Cahill drew back his right foot. Unfortunately, the connection was a scuffed one and Burnley were let-off.

Palace were made to rue not making their dominance of the first 15 minutes of the second-half count, with Ben Mee bravely heading home Ashley Westwood’s free-kick. 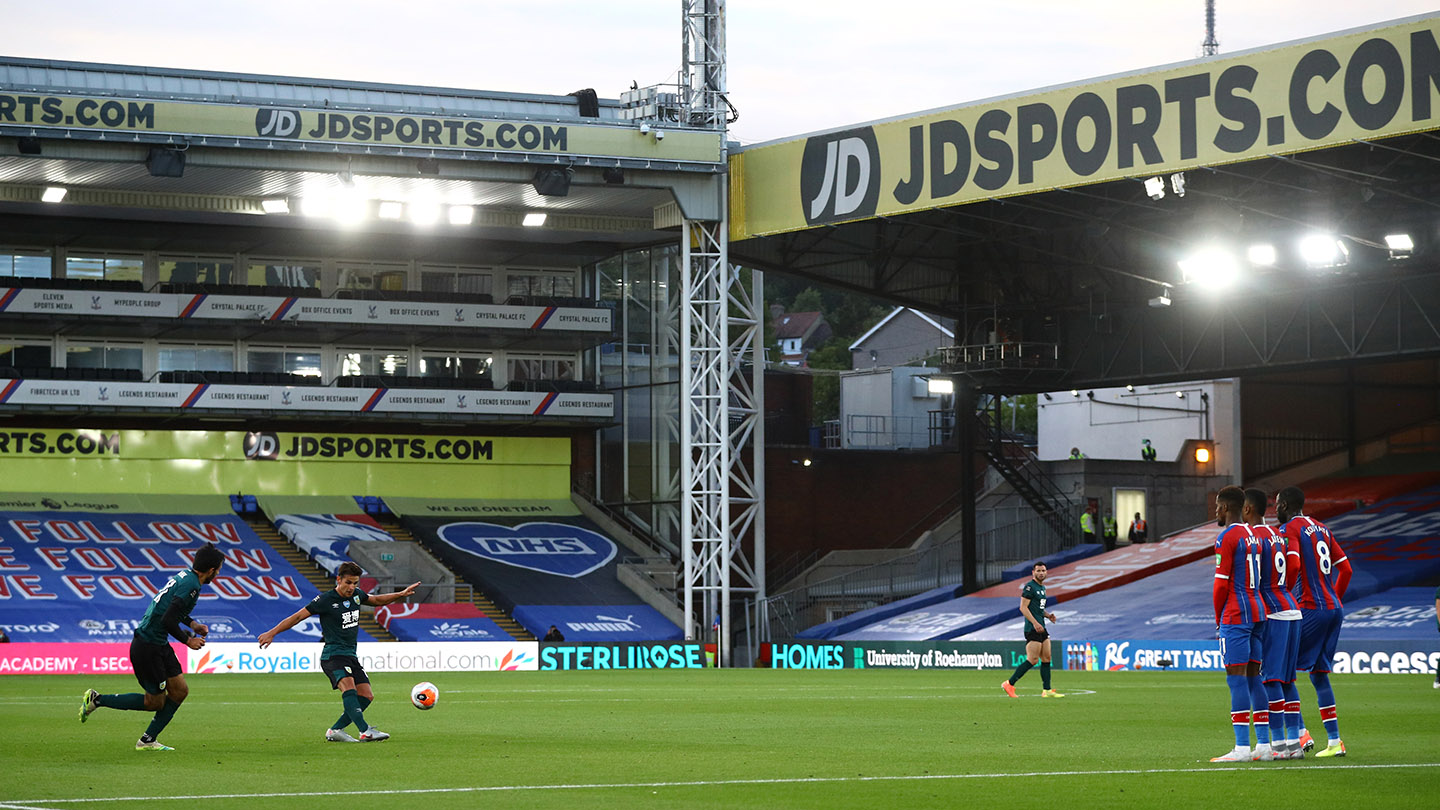 Andros Townsend nearly departed the Selhurst Park pitch in style, with the winger’s last involvement on 77 minutes, before being replaced by Max Meyer, almost resulting in another special strike for the already impressive collection.

Next to try and find a way past Pope was Palace’s captain again, but this time Milivojević demonstrated his potential impact in the air, rather than from set-pieces, connecting well with a Zaha cross but he was unable to keep the ball the right side of the crossbar.

Van Aanholt was the last player to test Pope, rifling from outside the box but Pope got down well in injury time to deny the full-back.

With the victory, Burnley leapfrog Palace and move up to eighth in the Premier League table.