Both Crystal Palace and London City Lionesses were unable to find the back of the net in their first league game of 2021, but, despite Amber Stobbs being sent off in the early stages of the second-half, the Eagles managed to secure a hard-fought point.

Palace were hoping to get the New Year off to a good start when they travelled to Princes Park on Sunday afternoon, with both the Eagles and Lionesses on equal points as they entered their first game of 2021.

The visiting south Londoners enjoyed the first chance of the game, with Cherelle Khassal through on goal for the visitors in the seventh-minute. However, a firm tackle by City’s Hannah Short prevented her from taking her shot.

Just six minutes later, the Eagles were provided another opportunity to go ahead. This time, Kirsty Barton went one on one with the ‘keeper, but Shae Yanez’s well-timed block denied the midfielder.

Freda Ayisi landed the first shot for City in the 17th-minute, however her attempt was wide, proving to be no problem for Chloe Morgan. 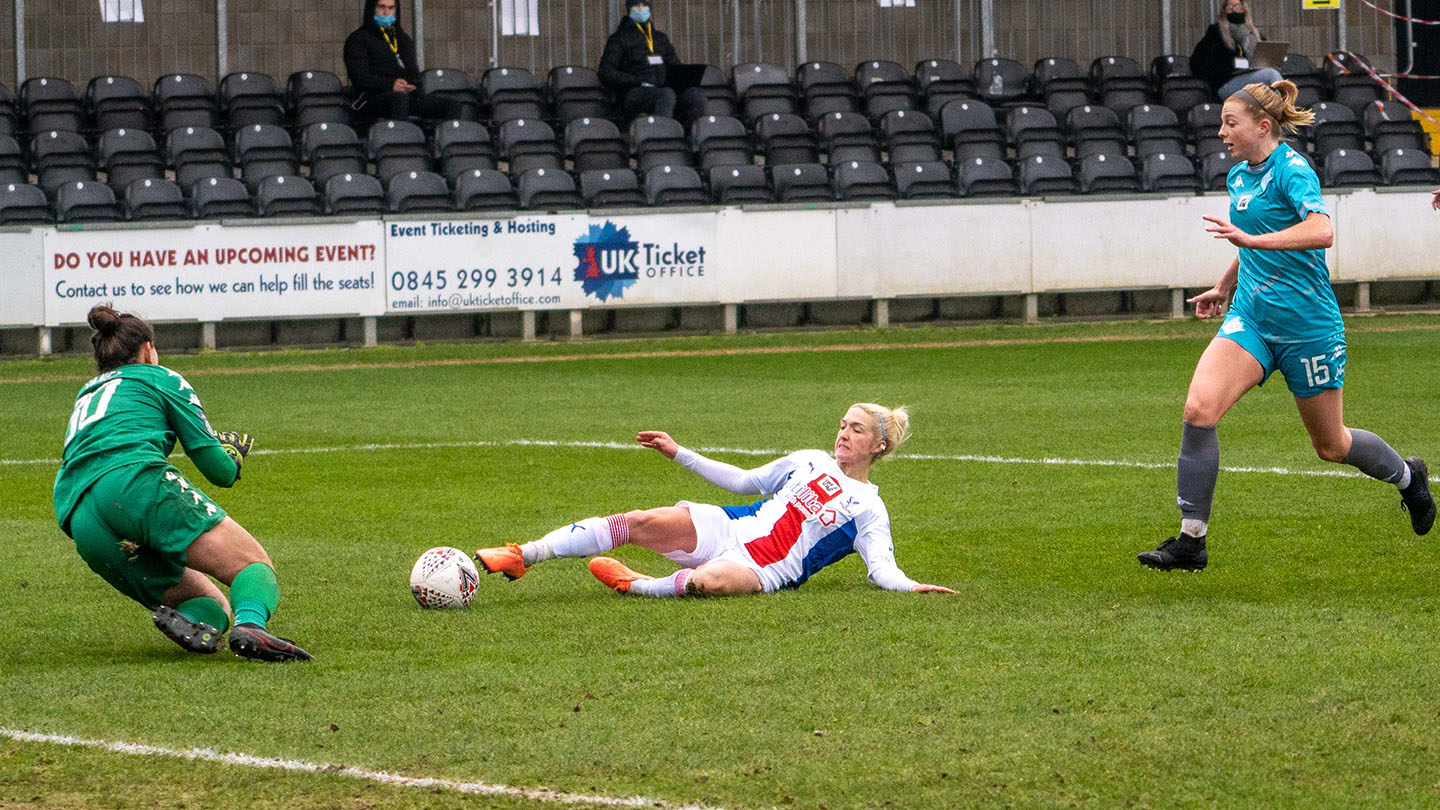 Moments later, Palace were awarded a free-kick, resulting in a superb delivery by Coral-Jade Haines into the box. Despite the quality of the ball, Palace were unable to create anything, with the home side looking defensively solid yet again.

In the 32nd-minute, a curling effort by Lucy Fitzgerald forced Morgan to make a save, providing City with their most dangerous chance of the game so far.

During the latter stages of the first-half, Khassal had another attempt at goal, but her shot was slightly wide - with the scoreline left goalless between the two sides.

By the half-time whistle, the two teams appeared to be evenly matched. Although Palace and City each had a set of chances, both seemed to be lacking the all-important finish.

Palace made a promising start to the second-half as Haines earned another shot for the Eagles, with the away side now looking more dangerous in attack.

However, the Lionesses went dangerously close when Lily Agg delivered a clever ball into the area. Atlanta Primus got on the end of it, but her touch went over the bar, causing a scare for Palace.

In a blow for the Eagles, Amber Stobbs was sent off for a second yellow just minutes later, awarding the home side a free-kick. After a testing delivery into the area, Elizabeta Ejupi’s header hit the bar, with City now firmly in the driving seat against 10 players.

As they continued to search for a winner, Ejupi’s bicycle kick was saved by Morgan in the final five minutes. Florence Fyfe then had a powerful shot at goal, but Palace's ‘keeper managed to get her fingertips to it, forcing it out for a corner.

Despite having just 10 players for the majority of the second-half, the Eagles were able to hold onto a draw, with Morgan producing some excellent saves in the dying moments to secure a point.