Palace produced a battling display against Liverpool on a cold Sunday afternoon at Hayes Lane stadium. The hosts made a bright start, responding to their manager’s demands to push high and press Liverpool’s defence.

Within the opening five minutes, Dean Davenport’s game plan almost worked perfectly when Palace’s Natkiel created space for herself in Liverpool’s penalty box. The forward couldn’t find her composure though, lifting her shot over the crossbar.

Elsewhere, Ffion Morgan regularly made surging runs forward from full-back to provide greater width for Palace and expose Liverpool’s defence, who were willing to play out from the back.

Liverpool defender Hinds was kept on her toes by the Eagles’ high press when she was regularly closed down by Morgan and Barton. However, after 10 minutes, Hinds was left clutching her leg after an awkward fall following an aerial duel with Bianca Baptiste. Liverpool played the next two minutes with 10 players. 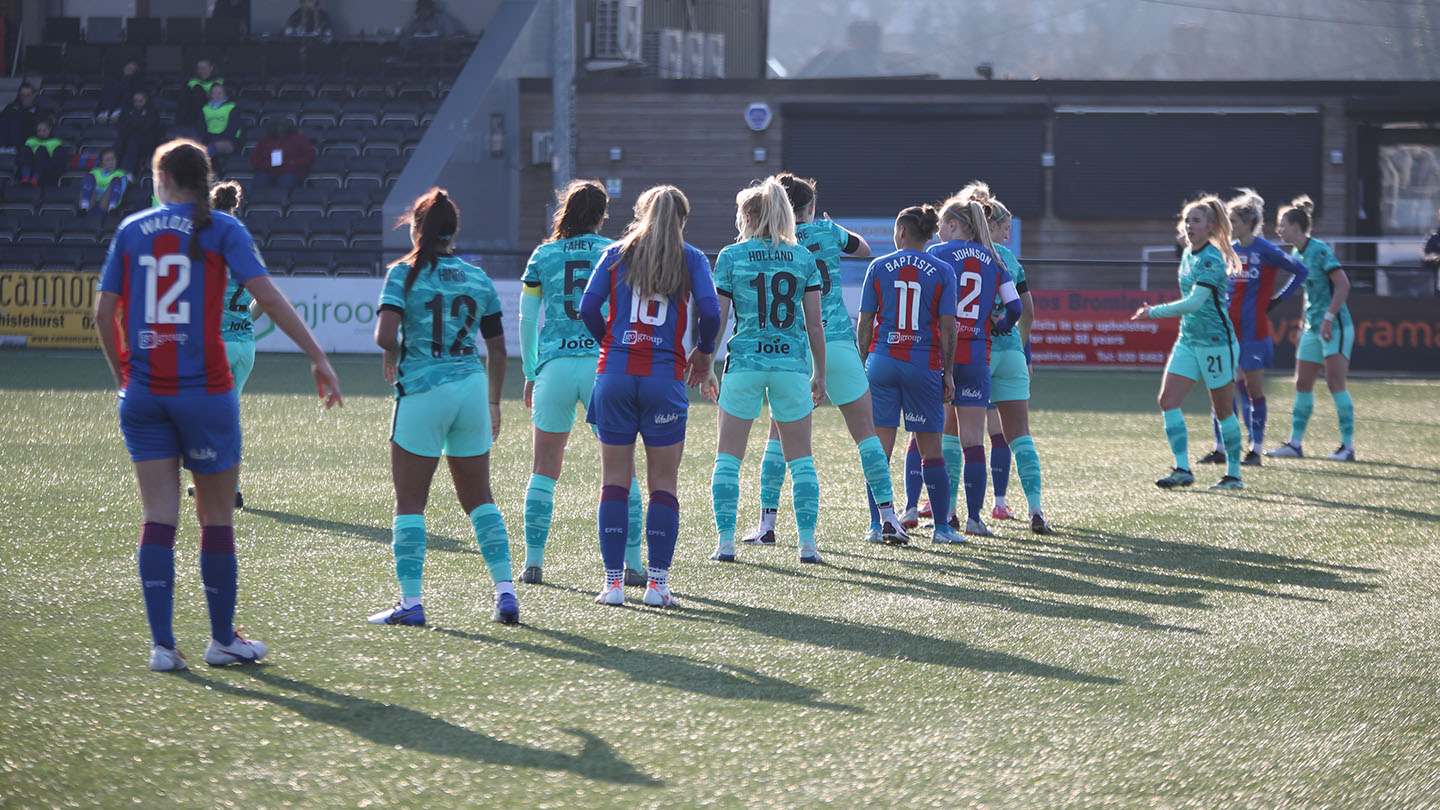 As the first-half progressed, the visitors grew more into the game. Lawley curled an 18-yard effort wide of goal, following an exciting passage of play to escape the clutches of Palace’s defence.

Aside from this, Palace were a thorn in Liverpool’s side all afternoon, with the hosts’ attacking players making intelligent runs behind the Reds’ defence. Siobhan Wilson stormed down the left-hand side, cutting in to drive a stinging effort which was saved well by ‘keeper Laws.

As half-time approached, neither side had broken the deadlock and seemed destined to enter the break level. Legs began to tire as both teams misplaced key passes that could have led to goalscoring opportunities.

Nevertheless, Palace had kept former Women’s Super League side Liverpool off the scoreboards during the first-half. 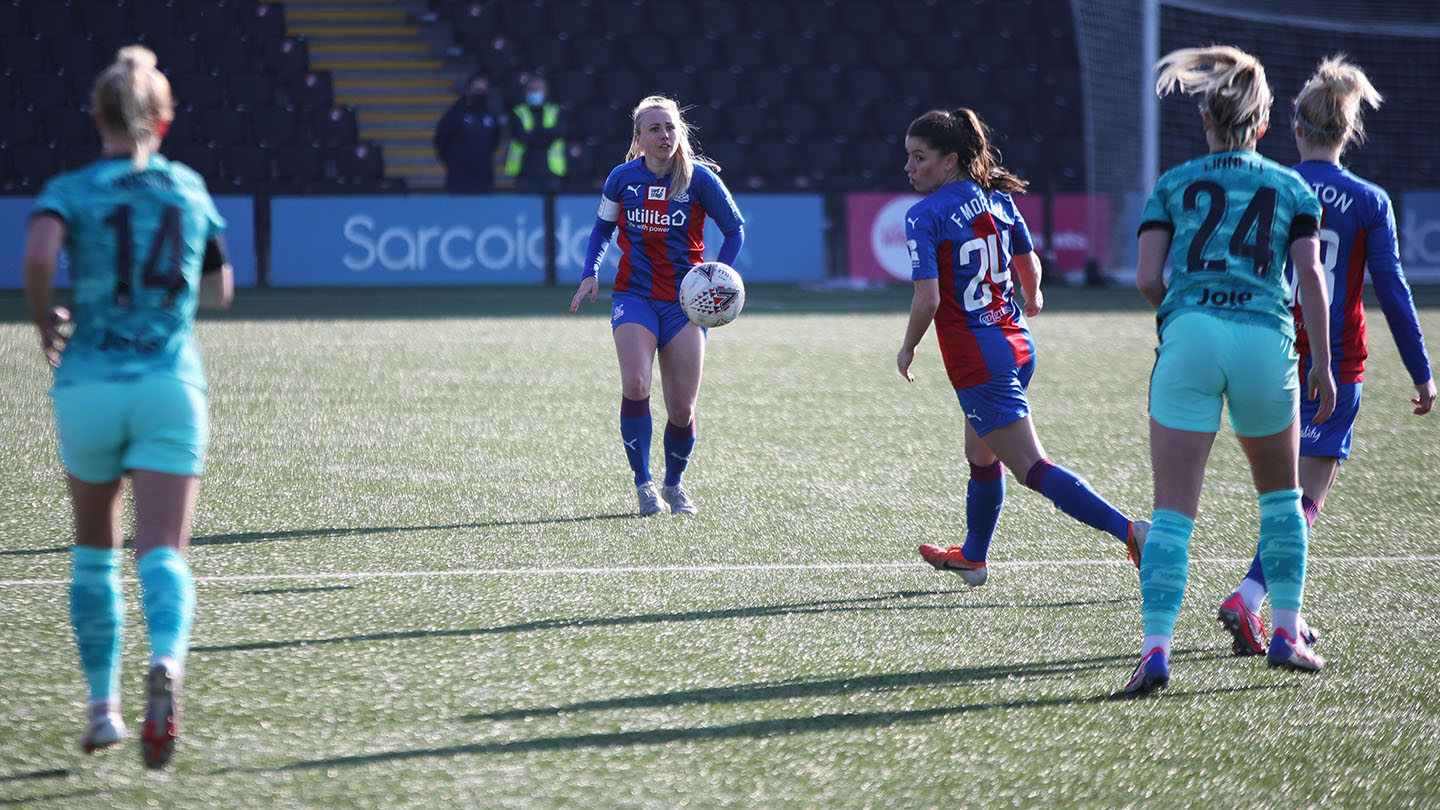 Palace No.1 Chloe Morgan produced a smart save to deny Liverpool forward Linnett’s strike from 20-yards. At the other end, the south Londoners were keen to make set-pieces count when Liverpool defender Rhiannon Roberts was adjudged to have handled Natkiel’s through-ball to Wilson five yards past the halfway line.

After passages of end-to-end action, Liverpool looked resurgent and hungry to make their chances count whenever they entered Palace’s penalty area. They did so when visiting defender Fahey headed her side into the lead after 65 minutes from a corner.

It was a bitter blow for Palace who had, despite Fahey’s effort, defended their penalty area well. Liverpool looked to double their lead and pile more pressure on Palace when full-back Roberts whipped in an inviting cross for Ceri Holland, who steered her shot narrowly wide of Chloe Morgan’s goal.

The Reds were turning on their style and Palace needed a response. They sought one determinedly when Barton struck an intelligent volley which caught Liverpool defenders off-guard, only for Laws to push over the Reds’ crossbar. After Palace’s best chance of the half, the Eagles’ high press and intensity slowed down somewhat.

The hosts would have felt aggrieved when Wilson’s run into a one v one position with Liverpool's 'keeper was blocked off by Meikayla Moore. Despite Palace protests, the referee refused to award a penalty.

Palace pushed for the equaliser at the end by bringing on Amber Gaylor with six minutes left to freshen up their attack. Chloe Morgan urged her teammates to push up and attack but Liverpool’s defence remained firm and resolute. This would have frustrated the Palace attack which ran tirelessly all afternoon, unfortunately unable to break Liverpool’s defensive resistance.

Palace remained determined and willing to salvage a point from this game but after a hopeful effort from Barton missed the mark, their defeat was confirmed. Next up is south London rivals Charlton on March 25th.