He may be a Palace fan favourite, but the language barrier means Eagles don’t always get to hear from Vicente Guaita.

However, in 2019/20, the shot-stopper caught up with the Palace programme en español to discuss Lionel Messi, Unai Emery and iconic ‘keeper, Santiago Cañizares.

As a typically jovial Vicente Guaita strolls down to the Palace media centre with a characteristic smile on his face - fist-bumping every member of staff as he goes, greeting a few in lightning-quick Spanish - it’s easy to forget a footballing CV that would comfortably blow most Premier League ‘keepers out of the water.

Here’s a man who was once tasked with filling the sizeable void left by Valencia’s legendary Santiago Cañizares; a man who forced his way into Unai Emery’s first-team at the age of 22; a man who cut his teeth against the likes of David Villa, Juan Mata and David Silva in training; and a man who once stared down Lionel Messi from 12-yards and parried his penalty clear.

But with no flicker of an ego, the patience to give you all the time you need and the humility to shrug off his claims to fame as ‘just part of the job’, it’s also easy to see why he would be a popular choice for any group.

Despite, at the time of writing, having spent just over a year in London, there’s no questioning Guaita’s popularity at Palace. His performances have rightly won round Selhurst and he’s definitely a cool character - not many could pull off that hair.

But as we sit down to start our interview ‘formally’, the light-hearted, fist-bumping Vicente gives way to the professional and Guaita’s game face turns on. It’s a switch that makes his immensely successful transition to Premier League football that bit more understandable.

He begins: “When I came into the team last year, my teammates welcomed me. Above all, there was Julián [Speroni] - a very good ‘keeper who had an incredible career at Crystal Palace.

“There are very few people who can say they’ve achieved what he achieved, even just staying at the club for such a long time.”

Asked if it’s harder without him: “Well, football’s a bit like that. At times you have new teammates, other times you remain with teammates. I think last season we had a really great group. Between Julián, Wayne [Hennessey] and I, we got on really well.

“This year [2019] we’re still really happy, Deano [Dean Kiely] is still here as a goalkeeping coach - he’s a great person and a true professional who helps us a lot; Hendo [Stephen Henderson] has come in - he’s a great ‘keeper and a great person. Julián was definitely a big loss but we have a good group this year, too.” 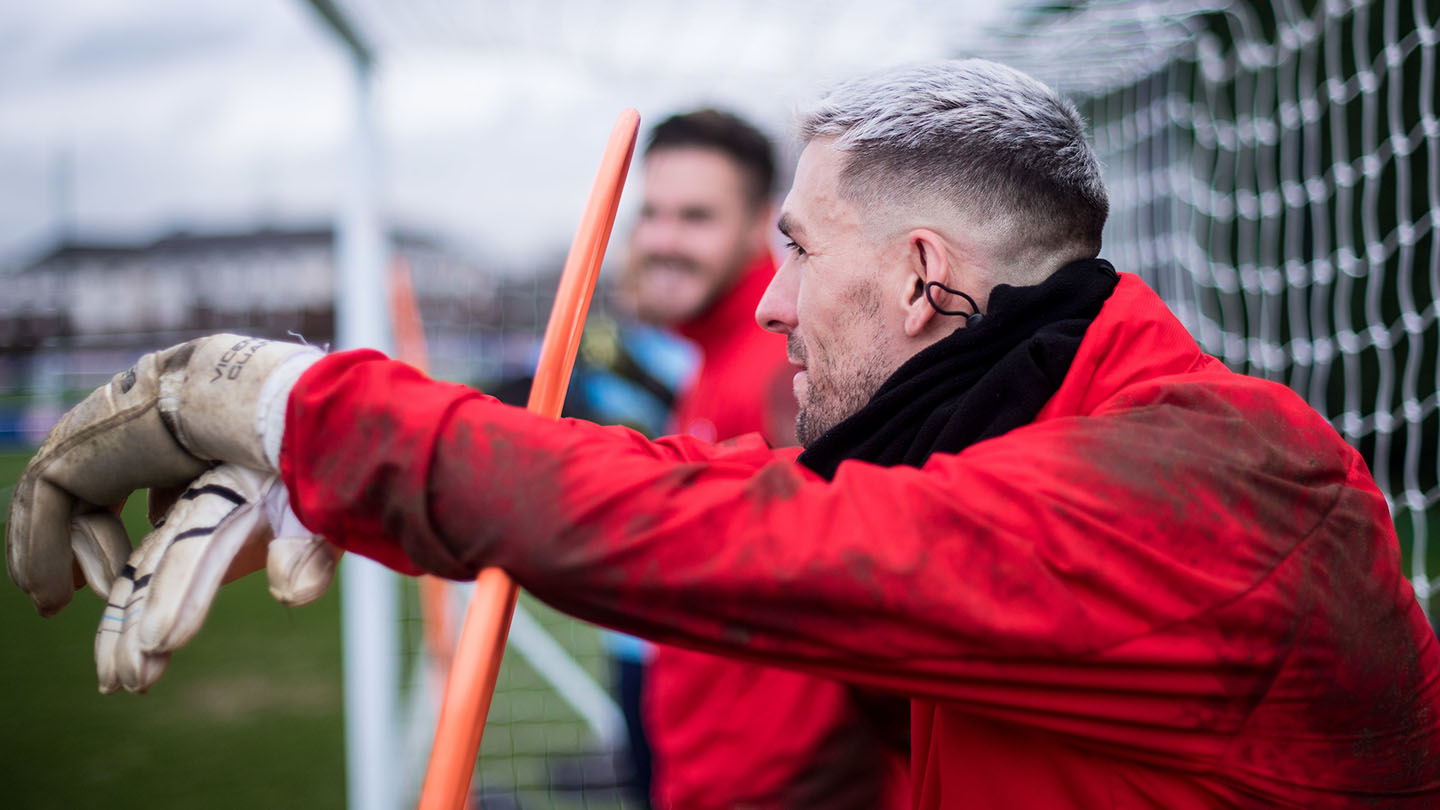 With one Spanish speaker moving on, another came in in Víctor Camarasa - with Guaita naturally gravitating towards a new compañero:

“I was about to talk about Víctor. We’re both from Valencia; he’s another great person. He had a fantastic season last year with Cardiff and having just arrived is wanting to help the team as much as possible.

“Of course, it’s always great to have another Spanish speaker - another Valenciano - in the team.”

And indeed, there’s no hiding Guaita’s Valencian roots, having developed in Los Ches’ academy in the shadow of another iconic blonde, Cañizares.

“It was an absolutely fantastic opportunity to work alongside Cañizares,” he starts glowingly. “I think he’s known worldwide, and being able to develop at Valencia alongside him was incredible. I still have memories of training sessions with him. He was so competitive, wanting to win in every aspect. That was great for me.

“There were little things that maybe you didn’t notice at the time that I now know were so important. He even taught me how to bandage myself up. He took me aside one pre-season and told me how to tape my fingers. Those are the memories that really stay with you.”

They’re tricks Vicente will inevitably look to pass down the generations, first and foremost to his son, who is now enrolled in Palace’s own Academy.

“He started playing in the Academy this year. He has the ball at his feet all day and though he’s still very young to be playing football he’s involved at the Academy now. We’re not sure if he’ll end up playing in goal or not. I’ve been telling him to play outfield. 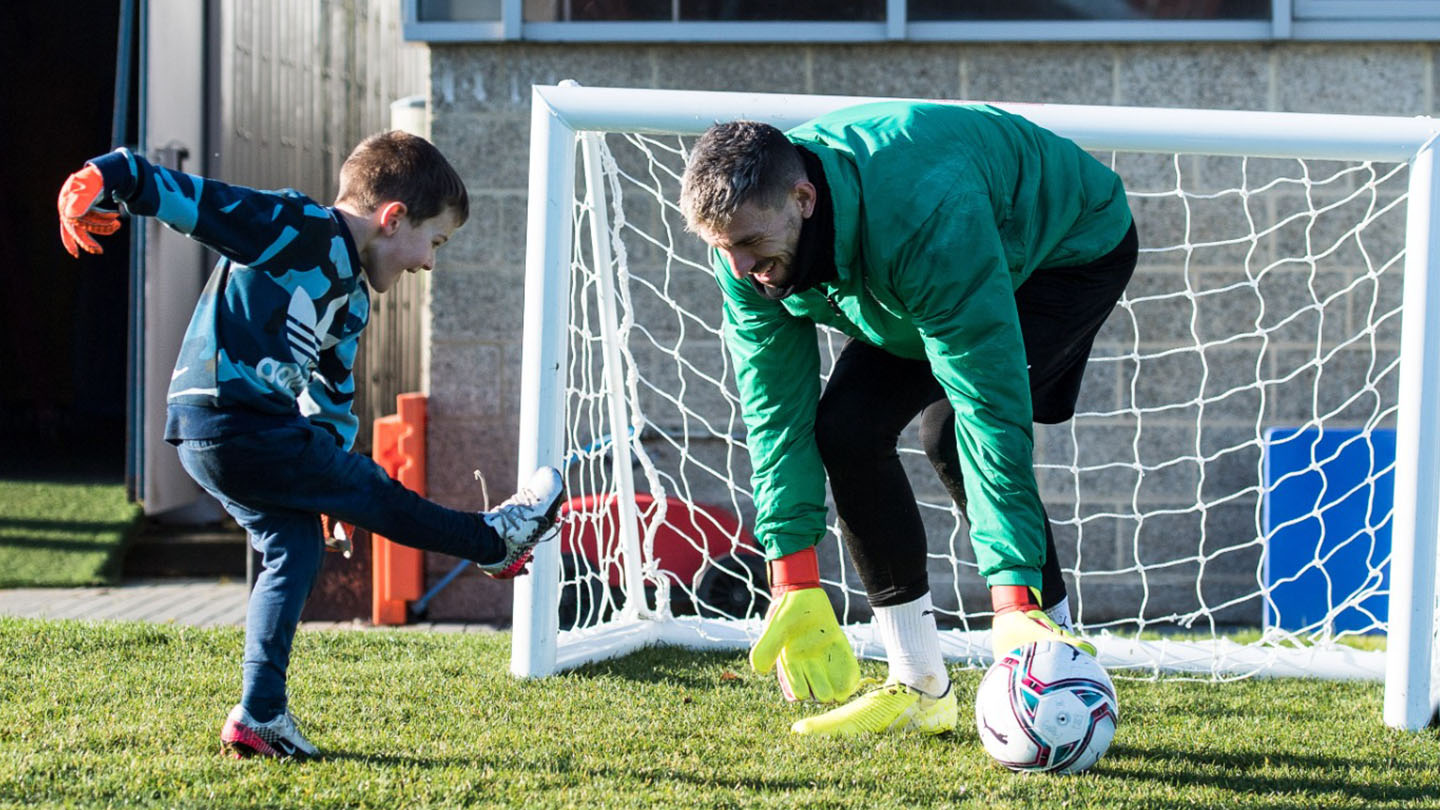 “I’ll be proud to see any of my kids playing sport. I started playing football when I was really young, my dad was a goalkeeper for Valencia and bit by bit I’ve gone about trying to achieve what he did.

“The idea that one of my children might carry on playing football definitely makes me proud, but I really just want to see him happy and enjoying sport.”

Unlike most ‘keepers, Guaita will be able to tell his kids that he has saved a penalty from one of the greatest footballers of all-time. Modest as ever, this was something he seemed keen to downplay:

“It’s definitely special but it’s special to say that I’ve played against lots of great players,” he says casually. “Whether it’s Messi or players here in England. We play against great players all the time. Maybe in England we don’t have the same culture of just one or two players standing out.

“There are circumstances where, say, you’re saving a penalty from [Cristiano] Ronaldo or Messi, okay, people will remember those individual moments for a long time but helping the team is what it really means to be a good 'keeper.” 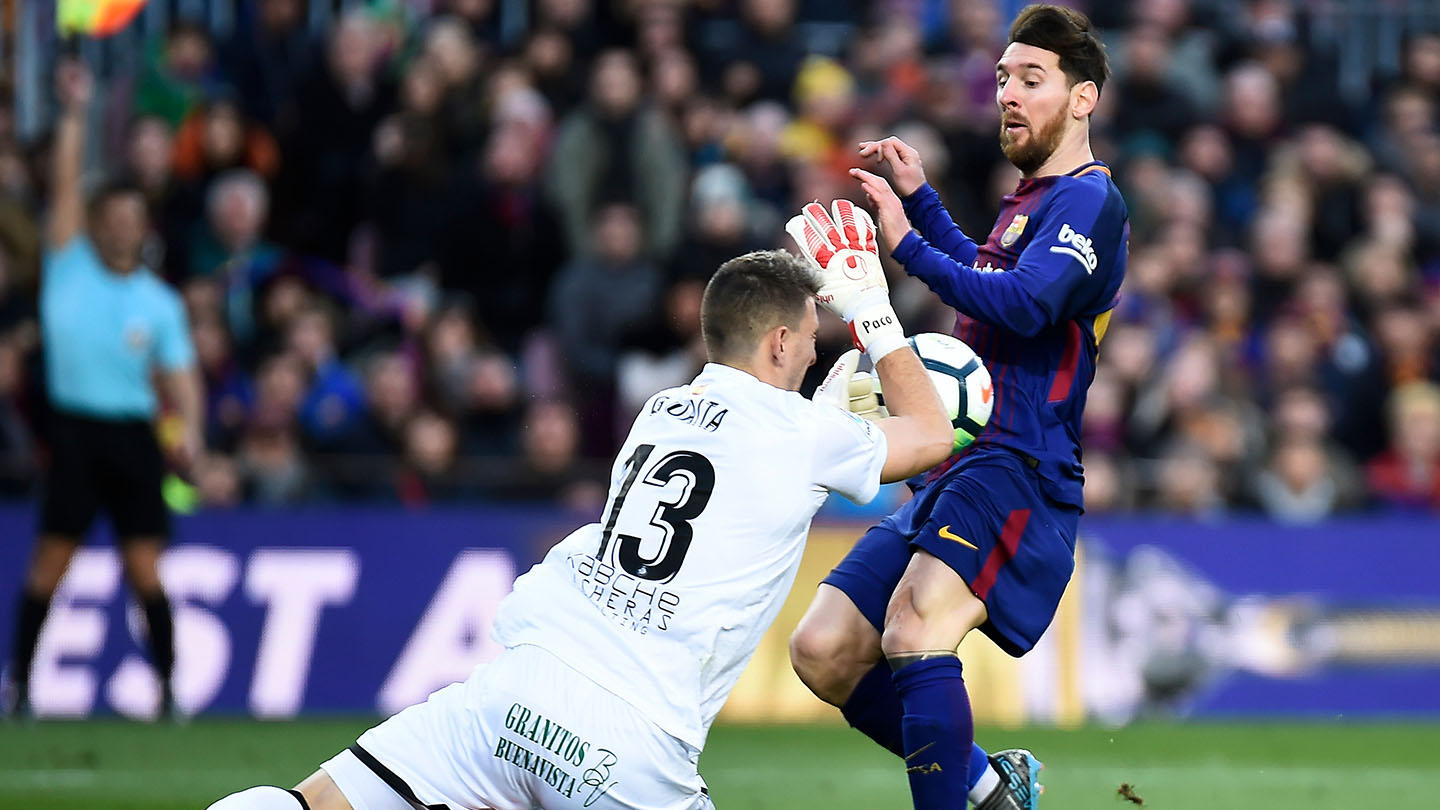 Good goalkeepers will inevitably need good coaches; and arguably the most influential in giving Guaita his break was Unai Emery, who put faith in Vicente at Valencia.

“I worked a bit with Quique Sánchez Flores as well but did spend more time with Emery. His results speak for themselves, his success speaks for itself. He’s a coach that works a lot for the team.

“He pays attention to every detail with the players - he’s maybe even a bit heavy - but that’s how he gets performances and he does get those performances which is the important thing.

“We did have great years together and all you have to do is look at his CV. When you have a CV as impressive as that, it says all you need to know about the coach.” 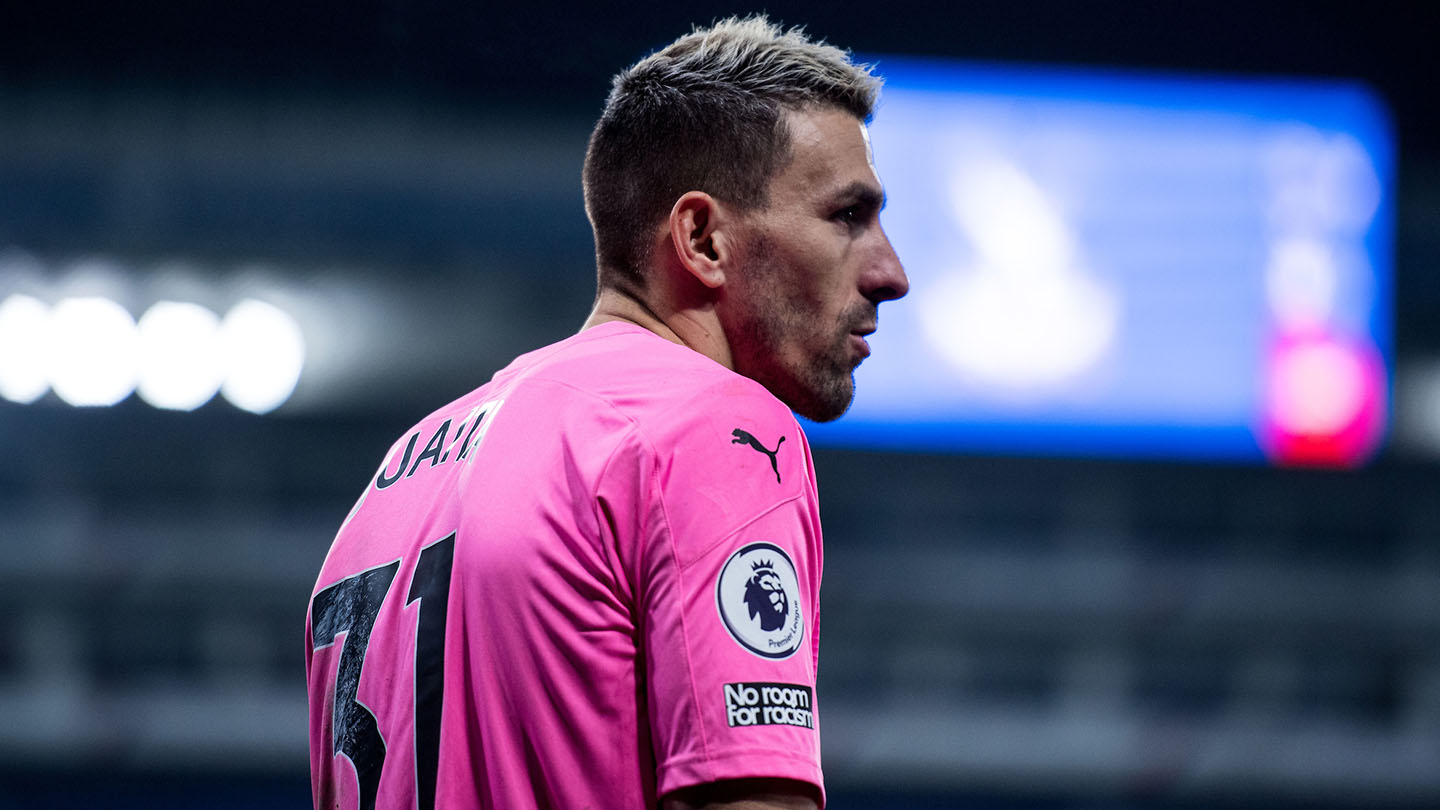 Having once picked out Isco and Paco Alcácer as two teenage prospects to watch in Valencia’s youth setup, you have to wonder if the Spaniard would ever turn his eye for talent towards coaching.

“It’s not easy being a coach or a scout, but when you’re speaking about players like Isco or Paco Alcácer - or someone like Aaron Wan-Bissaka from last season - these are players that break-through and clearly speak for themselves on the field. You can always see that talent like that on the pitch.”

With that said, it’s clear Vicente buys into a team that trusts its youth: “Generally, it’s a really important thing to have players grown in your own academy and every X years you’ll get a Wilfried Zaha. I hope there are lots who can make the jump to the first team at Palace.” 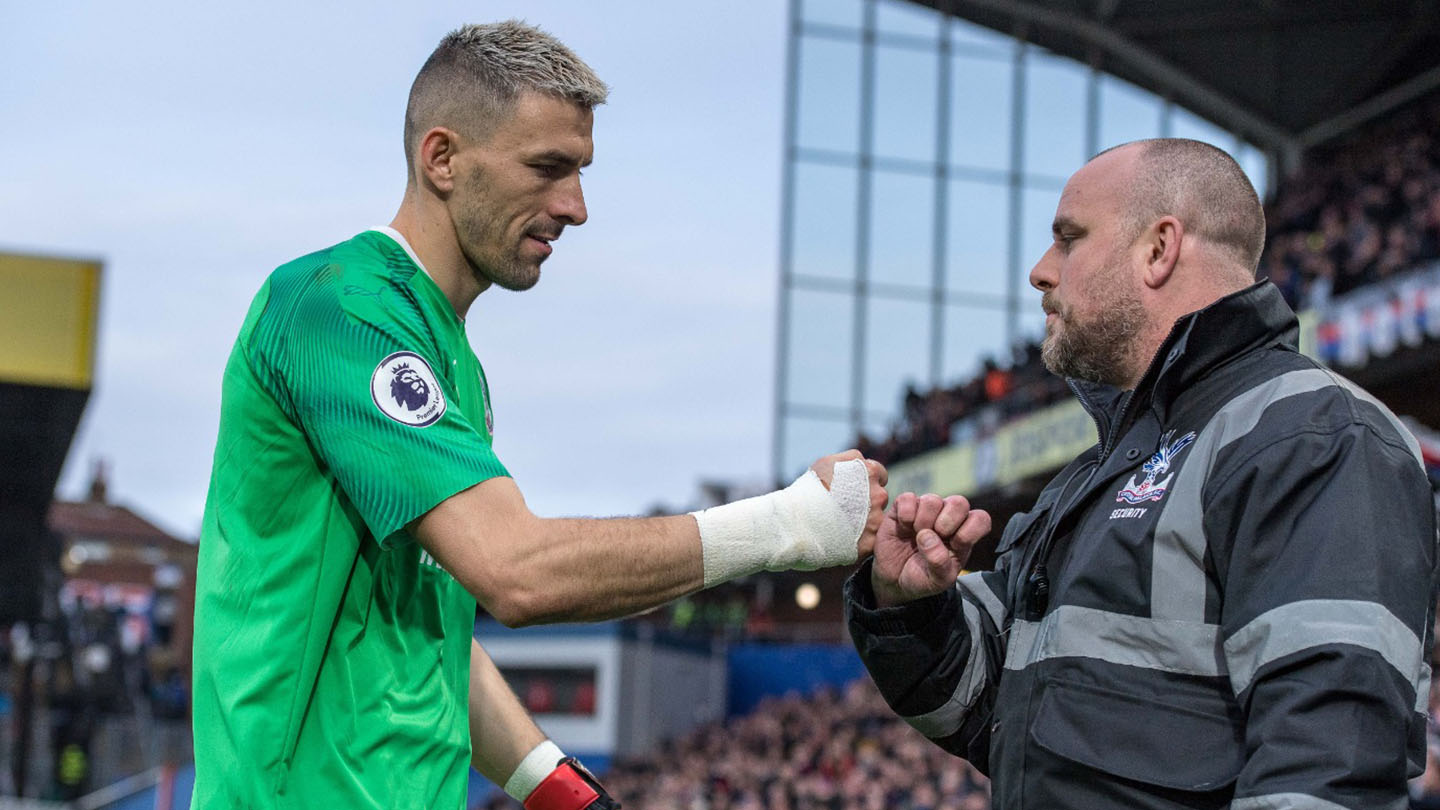 His advice for them?

“It’s all about waiting. Over the course of the season you’ll see more players featuring because of different circumstances.

“It’s all about waiting for those opportunities. I remember my debut came because César Sánchez - who used to be at Tottenham - and Miguel Ángel Moya - who now plays at [Real] Sociedad - got injured. You have to know how to wait.”

Having cemented his place in the Palace squad and the hearts of Palace plans, it might take something special to shift our No.31 away from Roy Hodgson’s starting lineup. And it seems the Spaniard is more than satisfied with his time as an Eagle so far.

“The truth is, I’ve had a great year in the team and a great year at the club. Though it may not seem like it, it’s really difficult to leave your home country but I’m having a great time in London.

“I can say that I’m happy in England, happy at Palace and happy in the home of the Eagles.”

He stands up, smiles and walks away with a fist-bump. Stay cool, Vicente.

READ NEXT: Speroni reveals how a VHS tape brought him to Britain and what made Palace special