‘We had momentum’: Vieira explains difference between Palace and Liverpool

Patrick Vieira said he felt the momentum was with Crystal Palace after the south Londoners scored against Liverpool.

The manager saw his side fight to come back from 2-0 down after half an hour, with Odsonne Edouard and Jean-Philippe Mateta linking up to score in the 55th-minute. 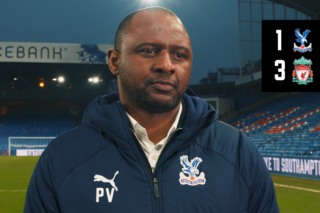 The hosts then worked resolutely to find a second goal, but were denied the chance to continue their pursuit by a late penalty decision which saw Liverpool win 3-1.

Explaining his half-time message, Vieira said: “We knew physically we could try to impose ourselves and that was the case in the second-half. We scored that goal and the crowd was behind us and I strongly believed the momentum was on our side to get a point.

“We tried to stay in the game, came back and showed character and personality and scored that goal where I believed momentum was on our side because physically they dropped a bit.”

Looking at the game more widely, Vieira was measured in his summary of the two teams’ performances, saying: “They were really good… By far they were the better side in the first-half. We came back in the second-half and tried to keep the tempo higher. We created a couple of situations and I think today again we should score more goals because we had a couple of really good situations.

“We knew they were strong, we knew the way they’d close us down would be difficult to play. We had a difficult game against one of the best teams but I’m proud about the strength and mentality we showed in the second-half. I think we came back and gave them the hard game they were expecting.

“But at the end the difference is as well the experience between the two teams. We learned, learned in a hard way, but there are still a couple of positive things to take from that game.”