Crystal Palace Under-23s have secured promotion to the Premier League 2 Division 1 after victory in a penalty shoot-out against Sunderland in the play-off final.

The Eagles’ victory over The Black Cats means they will compete in the Premier League 2 Division 1 next season, the highest level of development football. Promotion to this tier is a remarkable feat as this was the first time the south Londoners competed at Category 1 level.

Shaun Derry’s young Eagles have worked tirelessly throughout the season and their performances are a credit to the club. After a season of hard work and dedication, check out how far they’ve come month by month in the season review below.

Crystal Palace Under-23s started the 2020/21 season at a new frontier, having been instated into the Premier League 2 Division 2.

The U23 squad previously competed in the Professional Development League, but having been awarded Category 1 Academy status by the Premier League in July, the Eagles found themselves at the highest development levels.

The U23s started their first ever competitive game as a Category 1 Academy by welcoming West Bromwich Albion to Selhurst Park in September. The Eagles were given a quick reality check as the more experienced Baggies took the lead early on. Scottish midfielder Scott Banks levelled it for Palace going into the break.

The Baggies took the lead again immediately after the break, but Banks levelled the scores once more. Kian Flanagan put his side ahead in the 89th-minute, though West Brom hit back in injury time to deny a fairytale start to Palace’s debut in the Premier League 2.

Four days later, the Eagles were on the road to Norwich for their first away game as a Premier League 2 side. Despite their best efforts, Palace fell to a 3-0 defeat on a rainy day at the Norwich City Academy.

October saw Palace welcome Aston Villa to Selhurst Park. Former right-back Nathaniel Clyne was registered as a trialist before this game, having recently been released from Liverpool. The Eagles looked set to secure a point in the pouring rain, however their hopes were dashed as Villa’s Treick Wright scored with what proved to be the final kick of the game in the 92nd-minute.

The Eagles travel to Lancashire to face Burnley midway through October. The hosts went down to 10 men early on with a red card to Mace Goodridge and Palace capitalised on the man advantage with a goal from winger Brandon Pierrick in the 55th-minute. This proved to be the decisive effort as the south Lononders held on for their first win of the season.

Palace hosted Wolverhampton Wanderers at Selhurst Park at the end of the month. First-team striker Christian Benteke got his name on the scoresheet just before half-time after an incisive Palace breakaway. The Eagles doubled their lead a minute after the restart when Banks skipped past three Wolves players to play a one-two with Pierrick before slotting home. Wolves pulled one back, but Palace held on to secure back-to-back victories.

November began with a trip to Leeds United. The Eagles were 2-0 down at the break and, despite Flanagan pulling one back, fell to a 4-1 defeat.

Palace then welcomed Reading to the brand new Academy show pitch at Copers Cope. Alfie Matthews got the hosts off strongly, securing a brace for himself before the half-hour mark. Striker Rob Street headed home a brilliantly worked one-two with Reece Hannam after half-time and then doubled his tally with another headed goal in the 86th-minute after a Palace breakaway.

Things then got worse for the Royals, with Pierrick scoring the goal of the game - a volley on the edge of the box to make it five. The icing on the cake for the Eagles was Banks slotting home an injury time penalty to round off a 6-0 win.

Flanagan scored his third of the season early on to give Palace the lead away at Sunderland. The hosts pulled one back just before half-time, however Matthews latched on to a cross from Street to restore the lead before the half-time whistle. The hosts levelled again, but the Eagles pressed on and Street got his name on the scoresheet to regain the lead. An own goal proved to be the difference as the Eagles eventually came away 3-4 winners.

Victory in the seven goal thriller against Sunderland was offset by a narrow 1-0 defeat at Stoke City a week later to conclude November's fixtures.

December saw the Eagles play their third successive away game, this time against London rivals Fulham. Defender Jay Rich-Baghuelou opened the scoring eight minutes in with a fierce shot from distance. Street doubled the Palace lead with his fourth of the season 40 minutes in. The Cottagers got one back just before half-time and ran riot in the second-half to win 5-2.

Just before Christmas, Newcastle United visited Copers Cope. First-team midfielder James McCarthy rifled a volley in early-on and that set the team on their way. Street doubled the lead for the Eagles on the hour mark before summer signing Spence secured Palace’s third and final goal.

The third successive home win meant the Eagles moved into the play-off places in the Premier League 2 Division 2 at the half-way point of the season.

A quiet January meant the Eagles only had to face Fulham at Copers Cope, in reverse of the previous fixture last month. The Cottagers were two goals to the good early on, but a Spence penalty clawed one back.

Another well-taken goal from Pierrick levelled the scores before half-time but Fulham took the lead shortly after and held on to bring an end to Palace’s run of home victories.

Spence opened the scoring from the spot against Norwich at Copers Cope. He notched his second a few minutes before the break after getting on the end of a John-Kymani Gordon cross. On the hour mark, Spence completed his hat-trick with a well-taken volley.

Gordon turned from provider to goalscorer moments later to claim Palace’s fourth and final goal of the game, sealing their first win of the new year.

The Eagles took on Aston Villa four days later and went behind early on. Palace fired back with a goal from Gordon half an hour in, though Villa got another to lead just before half-time. Summer signing Hale levelled the scores just after half-time with his first goal for the club, but a Villa double put them 4-2 up.

It looked bleak for the Eagles until Brandon Aveiro and Jude Russell scored a goal each to make it 4-4, securing a vital point away from home.

Burnley were next to visit south London as Palace looked to build on their impressive home form. It looked like the home side were heading for their first scoreless draw of the season, until second-half substitute David Omilabu pounced on a rebound from an Aveiro shot in the 87th-minute. His first goal at U23 level was enough to seal all three points for the Eagles.

The final game in February saw Palace travel to Wolves. Two quick goals in the opening 15 minutes were enough for the hosts to see off the Eagles, though Academy prospect Luke Dreher continued on his way to recovery with a substitute appearance.

The beginning of March saw Palace welcome title-chasing Leeds to Copers Cope. The south Londoners looked to capitalise on a man advantage early on after a Leeds red card 20 minutes in.

Rak-Sakyi struck his first ever goal at U23 level to give Palace the lead just after the break and the Eagles pressed on from there. As the visitors poured bodies forward, Spence hit them on the counter in the 91st-minute to secure an important victory.

A trip to Berkshire awaited the Eagles next as they looked to build on their push for a play-off place, but Reading took the lead early on. Although Palace managed to find an equaliser, they fell to an 87th-minute Reading winner. 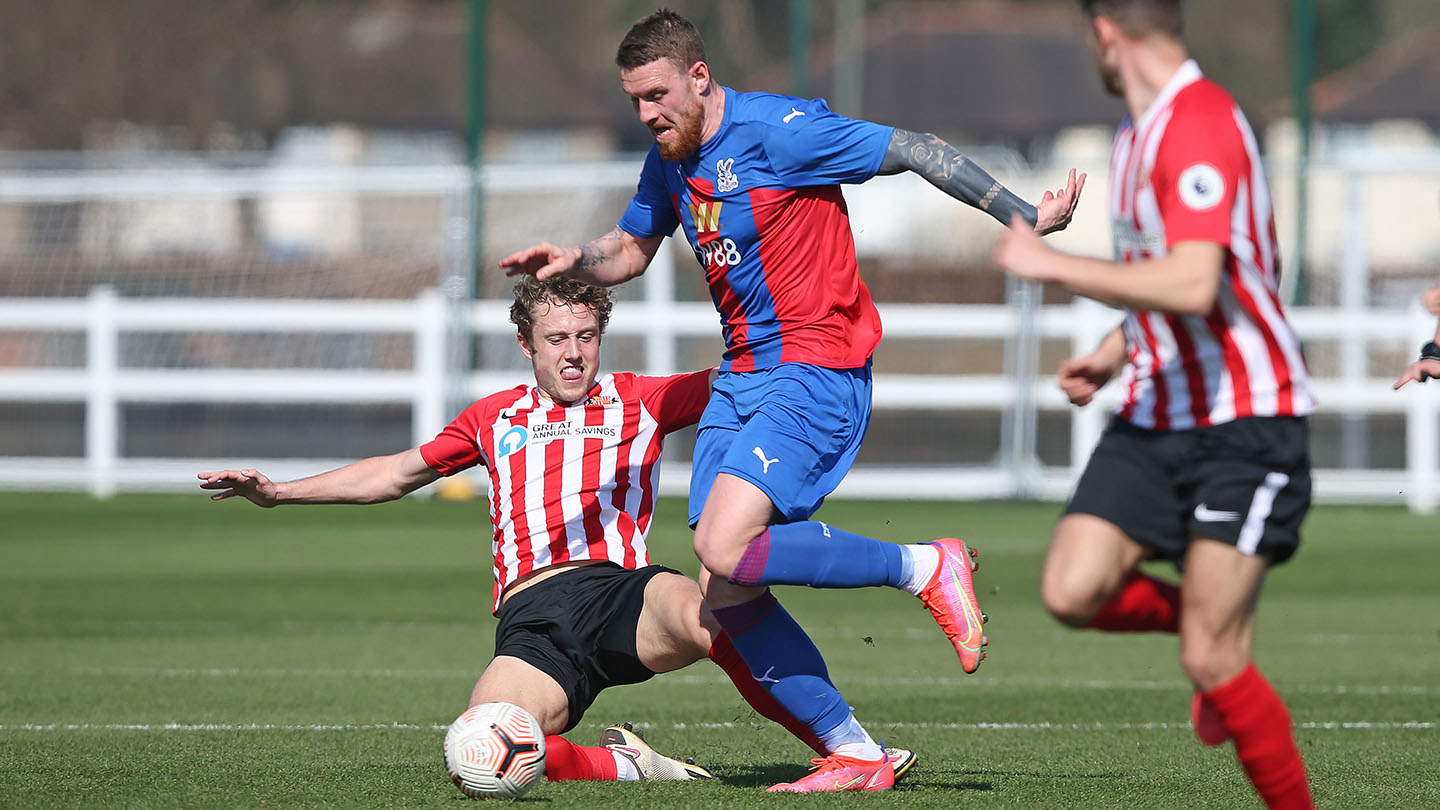 Sunderland were next to visit Copers Cope in mid-March. The Eagles created chance after chance in the first-half, thanks to the returning Connor Wickham, but the scores remained level at the break. The Black Cats held on until the 78th-minute when defender O’Brien headed home his first goal of the season. The home winning streak looked set to continue, however a late brace saw Sunderland come away with the points.

The Baggies opened the scoring five minutes into the final game of March. Wickham was instrumental in all of Palace’s attacks and he equalised 15 minutes in. He stepped up to cooly slot home a penalty 20 minutes later to give the Eagles a 2-1 lead going into the break. Palace pressed on for more in the second-half, though the game finished 2-1.

Shaun Derry's men looked to stake a claim for their place in the play-offs as they welcomed Stoke to Selhurst Park. January first-team signing Jean-Philippe Mateta joined the Development squad. The game burst into life in the second-half when Mateta headed home twice in quick succession after latching on to crosses from Hannam to give his side a two-goal advantage.

Stoke pulled one back just before the hour mark and drew level shortly after to secure their play-off place with the game ending 2-2. 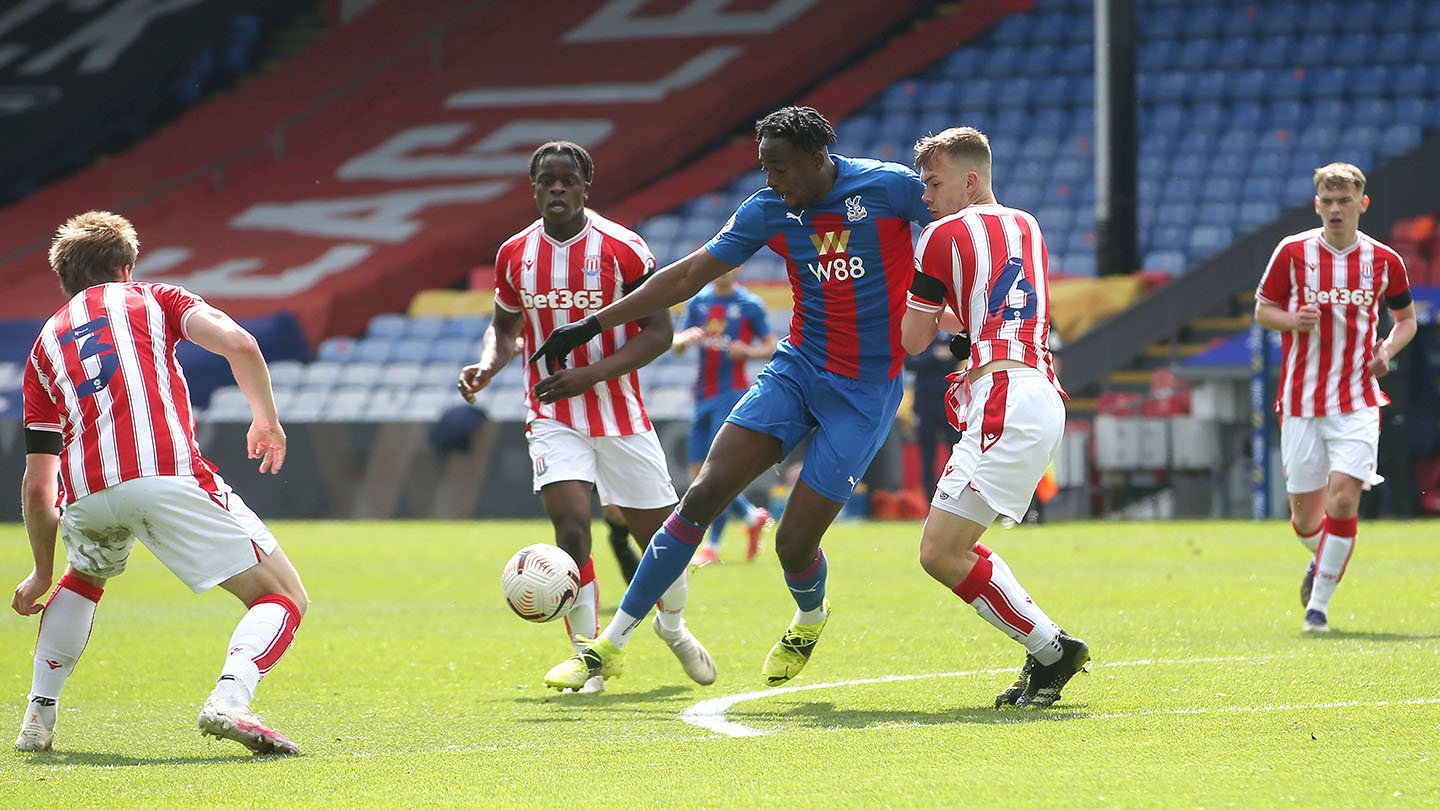 Palace’s penultimate away game saw them travel to Newcastle at the end of April. The Magpies put a dent in the Eagles’ play-off hopes as they won 2-0.

May: Middlesbrough, Wolves and Sunderland

A unique setup awaited the Eagles in May as their final two fixtures of the league season were both against fellow play-off chasers Middlesbrough. If either team could secure back-to-back victories, they would claim a play-off place.

The first of the two clashes against Boro came at Selhurst Park. The visitors took the lead, but David Boateng levelled the scores with his first goal of the season. Skipper O’Brien headed the Eagles in front 10 minutes after the restart from a well-worked Spence corner, however Boro levelled once more.

In the final minute of added time, O’Brien scored the most unlikely of braces as he headed home once again from a Spence set piece. The Eagles came away with all three points to keep their play-off hopes in their hands.

Four days later, the teams met again at Heritage Park. Palace knew victory would secure their play-off place and managed it convincingly as Spence pounced on a rebound to score the only goal of the game, propelling the Eagles into third and setting up a play-off clash with Wolves.

The Eagles stormed into a two goal lead thanks to Street and Rich-Baghuelou, but the visitors clawed their way back in the second-half. The game headed to extra-time and substitute Omilabu netted the winner in the first half of extra-time to secure a play-off final clash against Sunderland.

The play-off final turned out to be a cagey affair, with both sides failing to take their chances throughout the game. Extra-time was needed and since neither side could find a breakthrough, the game was decided by penalties. A miss from Sunderland culminated in Omilabu stepping up to score Palace's fifth and winning penalty.

David Omilabu. Ice in the veins.

READ NEXT: Parish: Academy redevelopment is 'best thing in my life'