Players reveal the secret to success in 2003-04

“Crystal Palace enter the land of consolation but they barely deserve that today,” one commentator noted as he watched Steve Kember’s Eagles fall 5-0 at the hands of Wigan Athletic.

At the final whistle, Wigan goalkeeper John Filan casually balanced the matchball in the crook of his neck - the blasé antics of a man untroubled by a deflated opponent.

For the best part of 90 minutes, Filan had been dormant aside from one stellar block against Dougie Freedman and was made to watch on as Nathan Ellington - who had scored no goals in Wigan’s 10 most recent matches - bagged a brace in a five-goal storming at the then-JJB Stadium.

Earlier in the match, one onlooking south Londoner spread himself across four empty seats - averting his gaze from the pitch and instead enjoying the midwinter sun.

With no previous experience and balancing his duties with those of a player, fortunes were hard to improve under Symons and before Christmas, Crystal Palace sat 19th  - improved but dangling precariously close to the relegation places despite boasting a squad which included the likes of Freedman, Andrew Johnson, Aki Riihilahti and Neil Shipperley. 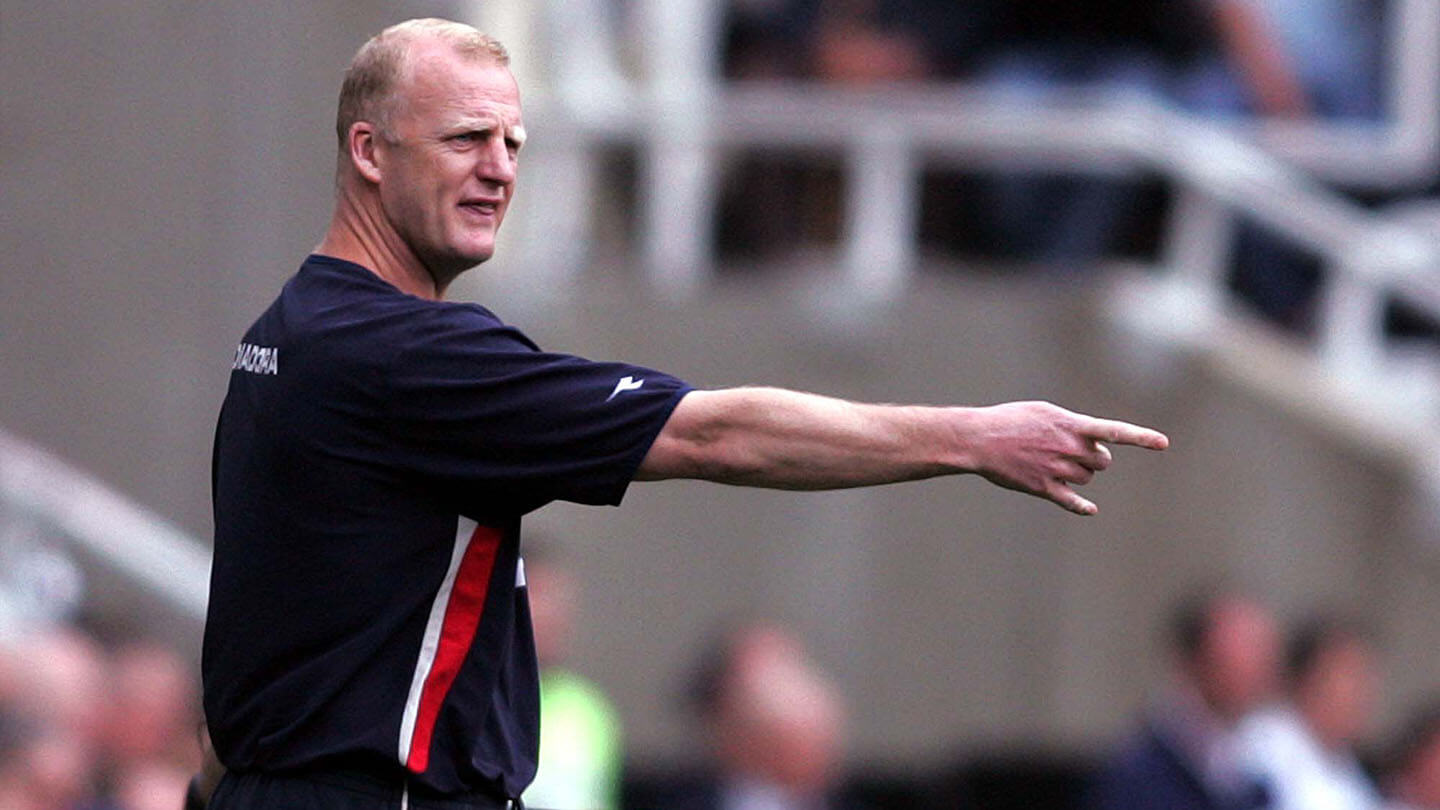 “When Iain came in and he brought John Harbin with him,” recalled former captain Michael Hughes, “we did four weeks of the most intense training that we’ve ever done. It was relentless. We were swimming, we were boxing, we were training twice a day.

“At the time I was going into matches barely able to run because of the work we’d put in and, I have to say, you question it as a player. ‘What’s going on here? We can’t play on a Saturday because we’re knackered.’

“After that three-four weeks, you start to feel the benefit of this fitness training and we were running over the top of teams, destroying them through fitness.

“We could beat them with a football but we could also beat them with our fitness and strength and it was incredible. If ever you want to get a team successful, get them fit. First and foremost, get them as fit as they can be and you’ll have every chance.” 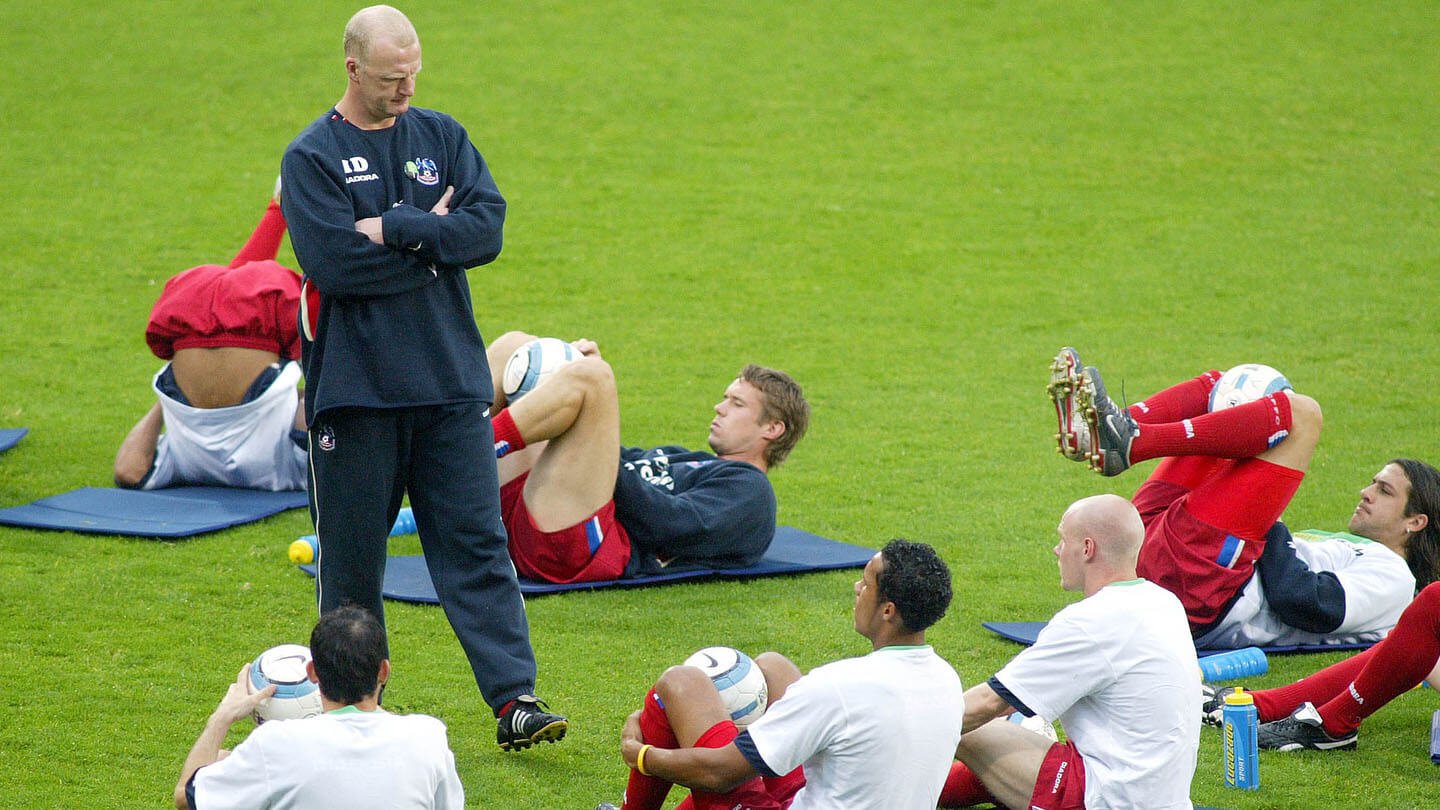 A renowned tracksuit-donning manager with a driven presence on the training pitches, Dowie enforced a new regime at the club which saw training begin earlier and finish later - often encompassing two sessions a day.

The man who benefitted most from Dowie’s new regime? Finland international, Aki Riihilahti.

“When I went to Palace on pre-season, I just realised how ridiculously unfit I was,” Hughes said. “Aki was one of the fittest guys at the club, if not the fittest. He was running backwards and he was still beating me!”

“In many ways,” Riihilahti explained, speaking to Palace TV in Helsinki, “I think he [Dowie] was the best manager I had at Crystal Palace. Why is that? Because he brought structure. He brought a lot of structure to the club; the way we operate, the way we train.” 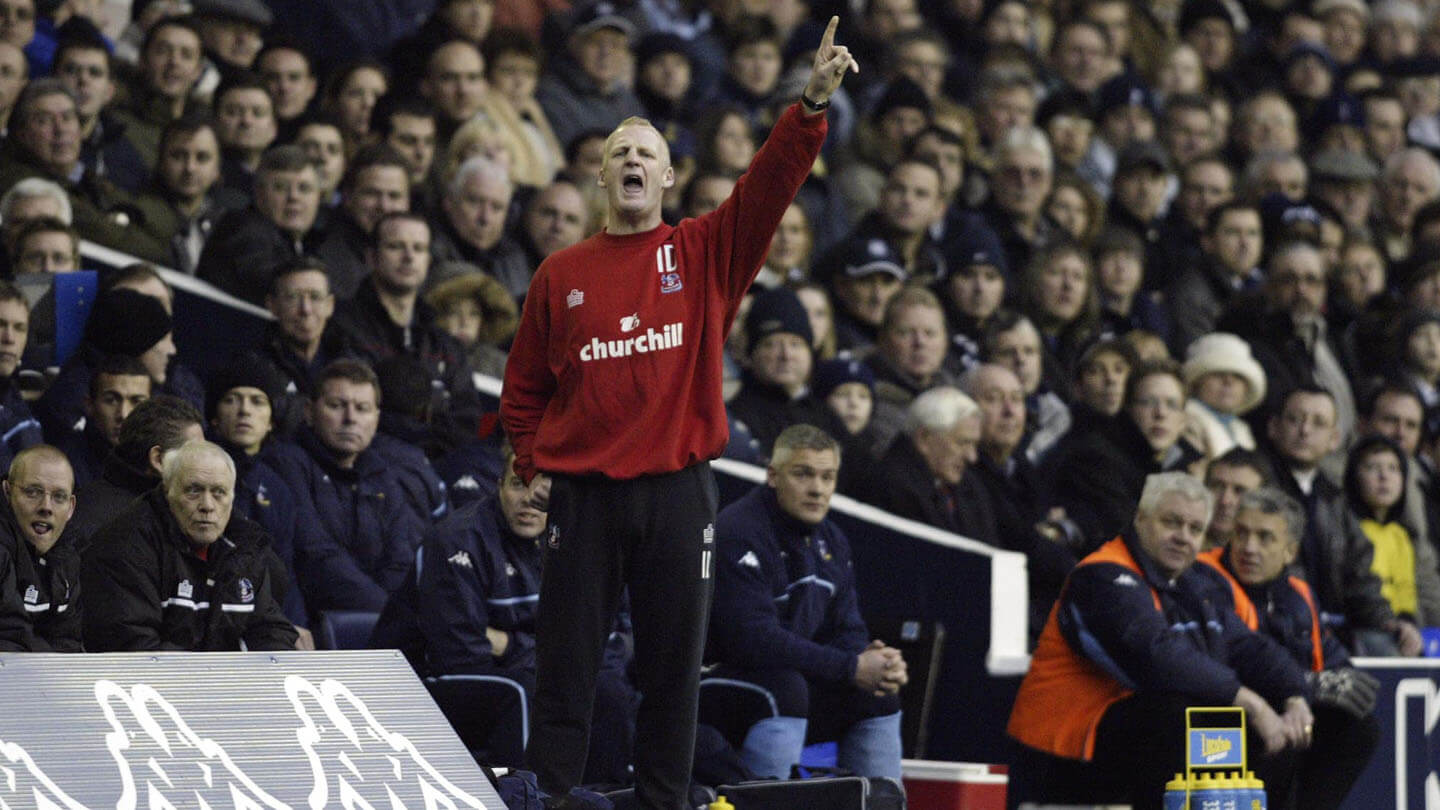 That structure bore fruit shortly after Dowie’s appointment, when following a loss, a win and a draw at the start his gruelling command - which was saved the usual congestion of the Christmas period by the lack of a New Years game - the Eagles were in shape, in form and on fire.

They would go on to win five consecutive matches, overcoming Watford 5-1 and Stoke City 6-3, and would win 17 of the 23 clashes Dowie led.

Dowie’s methods to achieving this success were, of course, varied and multifaceted, but a great deal of his results that season can be attributed to a driven commitment to his players and their fitness, with Riihilahti saying: “he really wanted to work what I can be good at and how I can contribute to the team.

“He showed it in everyday work, he was not just somebody saying it. His work ethic and his structure he brought to the club made the players better and many players should be thankful to him for what he did.”

Joining with Australian sports coach John Harbin - who Dowie employed after borrowing a book from and building their relationship thereafter  - the Palace manager’s approach to fitness was ahead of its time, keeping the players alert in a range of ways.

Another former player to help lead Palace to eventual promotion in 2003/04, Danny Granville, scored three times that season and was a regular starter at left-back. 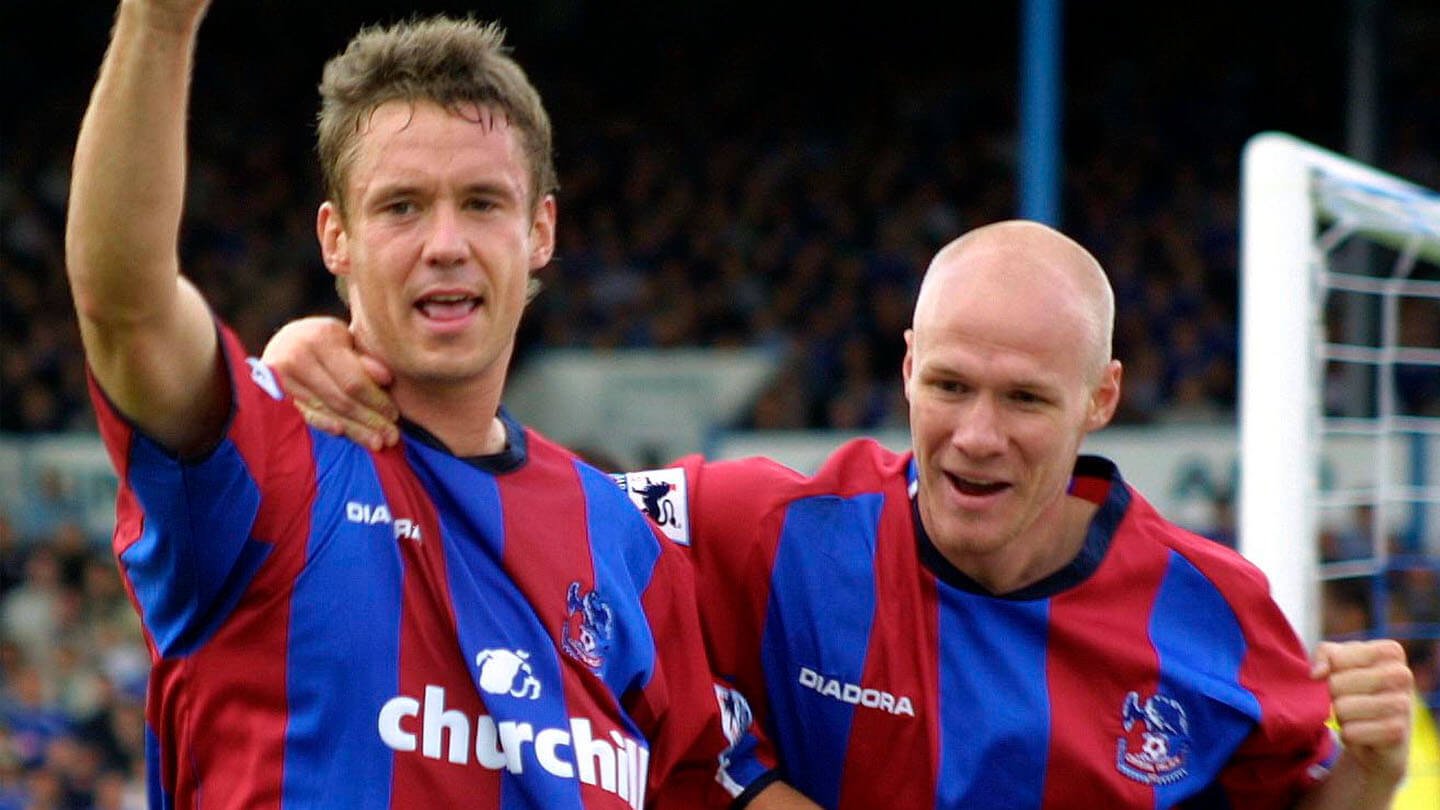 “We did obviously morning sessions but then in the afternoon, we’d do boxing stuff, we’d go swimming - he [Dowie] was massive on swimming,” the now-44-year-old reflected.

But it wasn’t all plain sailing for Granville when, on the eve of facing West Ham United at the Millennium Stadium, the defender picked up a vicious injury in the most unlikely of ways.

“[Sunderland away in the play-off semi final] was a really feisty game and I thought one of them caught my shin,” Granville recalled.

“I had a massive gash and you could almost see the bone. Dowie was going mad and I threw my shin-pad down in disgust. Anyway, watching back on the video after - it was Julian Gray!

“I went to play it up the line and Gray’s gone to back-heel it and somehow he’s lifted my shin-pad and just gashed it. Dowie’s going mad, going: ‘look at the state of his leg!’ I think I had about 12 stitches. 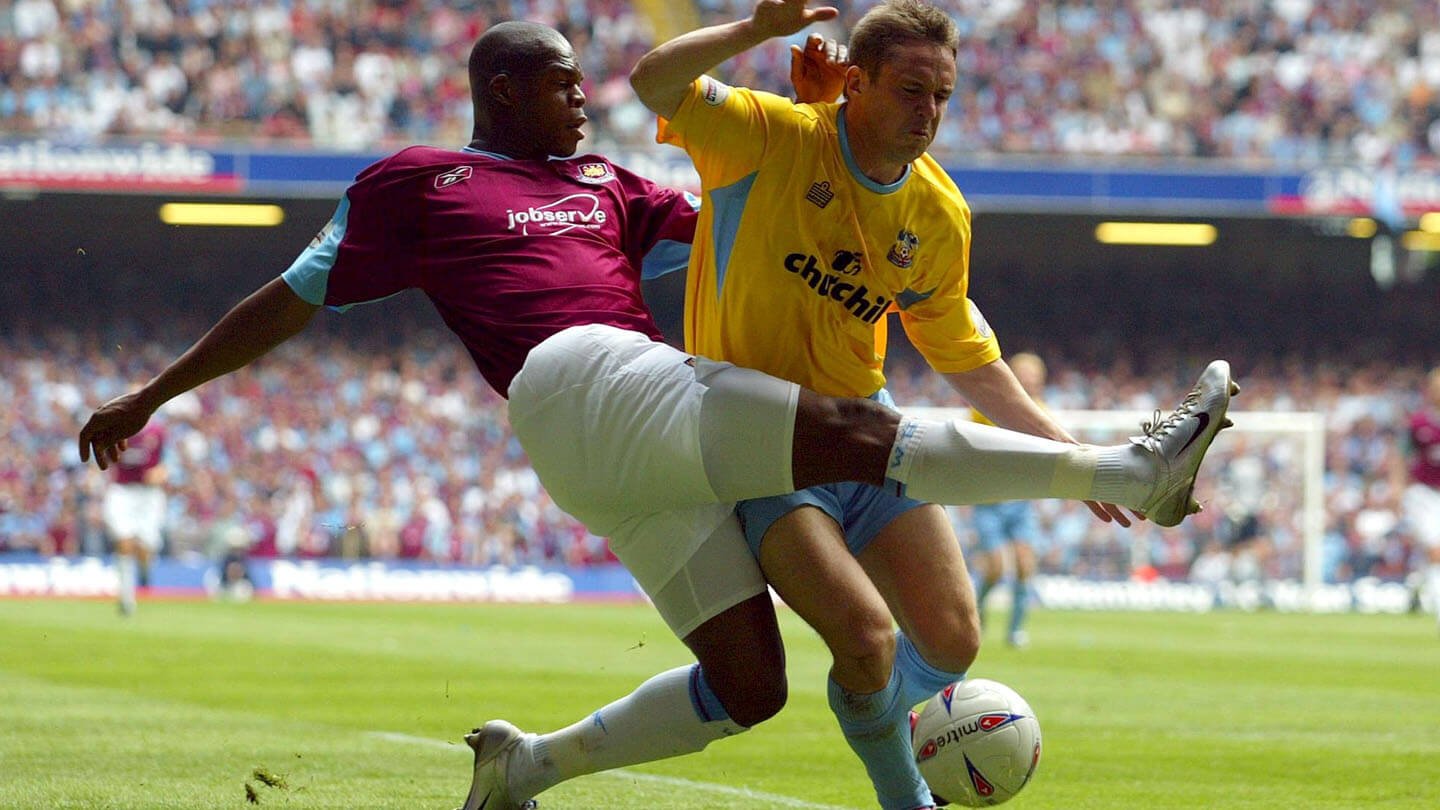 “[We had] West Ham coming up and I think we had about a week to 10 days before the game and I remember just going on my own and really putting myself through the paces. No one saw it, I was just on my own training in preparation. In that game, I had the biggest, clumsiest shin-pad on.”

The big, clumsy shin-pad didn’t seem to affect Granville, however, who battled through 90 minutes of glaring Welsh sun to send Palace into the Premier League for the first time in six seasons.

With the odds stacked against them, Palace were the clear underdogs against a Hammers side featuring Michael Carrick, Bobby Zamora and Matthew Etherington.

But willing them on from the sidelines with trademark passion was Dowie, and perhaps hours spent in the pool, at the punch bag and on the frosted pitches of early morning Beckenham made the difference that day.

From the land of barely deserved consolation to the lauded heights of the Premier League in just five months.

“I would have run through a brick wall for Dowie,” Granville says.