There was a chance for Palace to become imbibed in the local culture in Perth on a visit to the Western Australian Museum.

Jack Butland, Malachi Boateng, Jake O’Brien and Mark Bright were given a guided tour of the exhibits, as well as being treated to a smoke ceremony on arrival.

“It was a ceremonial greeting, it was welcoming us,” said Bright. “We were given eucalyptus leaves and they welcomed us in the native language. It’s all very interesting.

“History is really important isn’t it, especially here in Western Australia. We’re just fascinated by things that you see and that you hear." 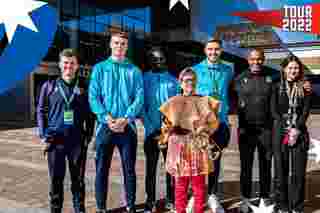 The museum is one of Perth’s most important cultural organisations, and has been promoting education of Western Australian culture for more than a century with its collection of more than eight million objects.

One exhibit focuses on sport and in particular on Nicky Winmar, an Indigenous Australian who fought back against racial vilification, in particular celebrating by lifting his shirt and pointing to his skin.

“Obviously they have a massive culture here and an incredible country that has been around for a very long time,” said Butland.

“There is a lot of history to learn about, but Nicky Winmar at the end was something that we are dealing with in the UK still: racism within our sport. He took that on head on.”