Vieira: Developing young players is part of our DNA

Patrick Vieira says that nurturing the careers of promising youngsters at the heart of his Crystal Palace philosophy, as his side prepare to take on Manchester United in Melbourne.

“Developing young players and young talent is part of the DNA of this football club,” he said in his pre-match press conference at the Melbourne Cricket Ground. “At Palace you had a couple of young players who came through and made a good career for themselves in the Premier League.

“We were successful on that side last year because we identify some young players and create a platform for them to express themselves. I believe this year it will be even more difficult, because we raise the level of demand on the players.

“Of course, having those players with us on tour will tell us whether they will be ready to take some part this season. If not, we will need to be ready to give them the game programme they need to play week after week and keep improving themselves.”

There are plenty of Palace fans out in Australia, and the Eagles trained in front of thousands at the MCG on Monday. But Vieira hopes his side will create a swathe of new supporters too. 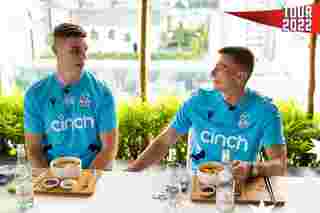 “[The crowd] will see a team that will be difficult to play against,” he said. “A side that will work hard, will work well until the last minute.

“Against Liverpool we showed that we can still be really competitive. We have young players who are really hungry to show that they want to be part of what we are trying to do in our football club.

“Of course, we have those players like Jordan [Ayew], JP Mateta, [Odsonne] Edouard, Joel Ward who want to show that they want to be a part of the starting XI.

“Players always have something to prove and I think they can be guaranteed that we will give United a good game.”

“But you just need to look at the individual talent they have in that team and believe that United are used to playing in the Premier League, and I think that this year they will be there trying to get a spot for the Champions League or to win the title.”