Kiraly opens up on 'wonderful chapters' in 26-year career

Returning to Selhurst Park as a Premium Matchday host for Palace's upcoming games with Southampton and Newcastle, Gabor Kiraly will arrive as a fan favourite club icon. In the summer before Palace took on Hertha Berlin in a pre-season friendly, the official Palace programme caught up with Kiraly to

Returning to Selhurst Park as a Premium Matchday host for Palace's upcoming games with Southampton and Newcastle, Gabor Kiraly will arrive as a fan favourite club icon.

In the summer before Palace took on Hertha Berlin in a pre-season friendly, the official Palace programme caught up with Kiraly to discuss his fond time in south London.

Nope. Not one mention of a certain item of clothing in this interview. And although Gábor Király didn’t exclusively say it, we like to think our former goalkeeper came away from our chat with him grateful that we didn’t once mention *that* choice of garment.

Of course, there’s so much more to anyone than the clothes they wear, and after speaking with Király, you leave knowing that this a man who treated his footballing career with the utmost respect, a player who was proud to pull on the shirt of whoever he was representing, viewing it as his duty to perform well.

Last summer’s game against Hertha Berlin saw the club that gave Király his first adventure outside of Hungary face up with the club he regularly refers to as a family; his family, in fact.

The announcement of the Hertha Berlin friendly brought excitement amongst the Palace faithful on social media. After all, it isn’t every day you get to watch one of Germany’s finest club sides. 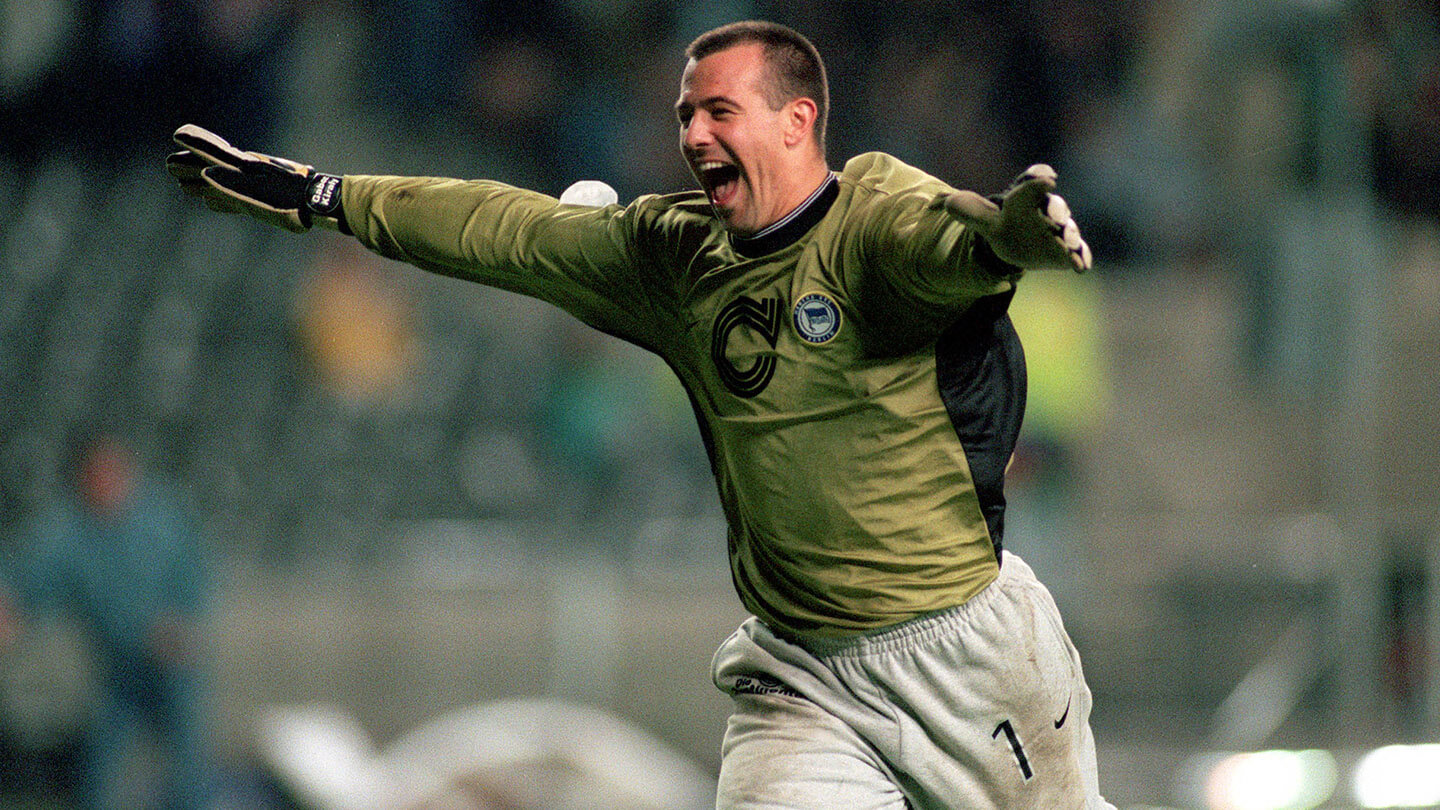 On the other side of the advertising boards, playing for Die Alte Dame was special for Király too: “My first foreign country was Germany after moving from Szombathelyi Haladás to the amazing city of Berlin,” he said. “My hometown was just 80,000 people, so moving to a place like that was a huge step.

“I have to learn everything: the language, the culture, the style, the people and the reaction to me. But I am the type of person who wants to learn and to develop.

“I am moving with my wife, just her and I, with all our friends staying in Hungary. However, the club helped us settle, as did my teammates, and that was so important to us and I am thankful for that.”

Throughout the interview, Király continually remarks on how lucky he’s been to have had the experiences and opportunities that his career threw up. It’s a genuine appreciation, though, rather than a footballing platitude.

This is a man who wanted to absorb everything he could out of every city, every club and every fan he came across. 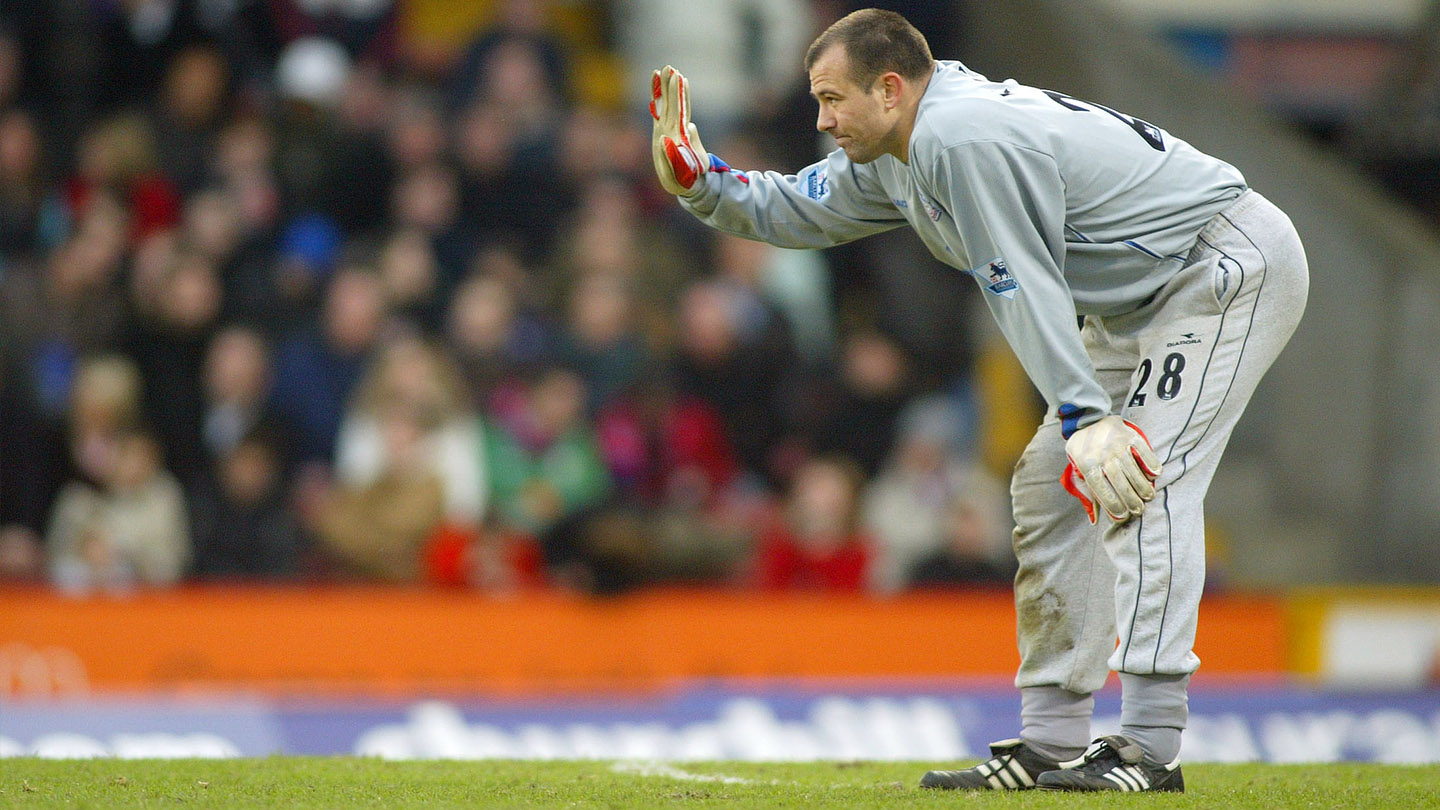 “I still speak fluent German, and enjoy visits to meet friends in Germany, and for that I am grateful for what football has given me in terms of opening different cultures to me.

"It has been important for my children, and they now speak three languages – German, English and Hungarian – all perfectly, and I am proud to have given my children that opportunity to learn and experience these different countries.

“I had a great time in Berlin, and although I was there seven years, it went really quick; I was playing in the Bundesliga, called up to the national side and then also playing Champions League football. So many wonderful opportunities early on in my career at this wonderful club, with great fans and history; I am grateful for that.”

After seven years with the Old Lady, playing in the Champions League and becoming Hungary’s No.1 between the sticks, Király caught the attention of the south London scouts with a clean sheet against Germany whilst on international duty. That performance confirmed to the Eagles that they needed to sign the 6’3” shot-stopper between the sticks.

“Hungary played Germany in a friendly in 2004 and Palace had scouts there for the game. We beat them 2-0, with Sándor Torghelle getting both goals, and that’s when Palace began discussions with Hertha for me.

“I was so happy to join this club, because for me Crystal Palace is one big family. Everyone was friendly, everyone helped my integration and this enabled me to fall in love with the club quickly, and gave me a huge sense of pride pulling on that shirt. I always felt like I could never play bad for this club and its people; I have a responsibility to them.

“Everything was so professional when I arrived; I loved the training ground and the location of it being in a quiet area. I lived in Bromley during my time with the club and I enjoyed being there as it was a discreet area where I could live a quiet life, which is something very important to me as a footballer.

“Playing my first season in the Premier League never mattered to me, I just wanted to play for this club. Therefore, when we were relegated, it never crossed my mind to leave; I would play for this club in any league.” 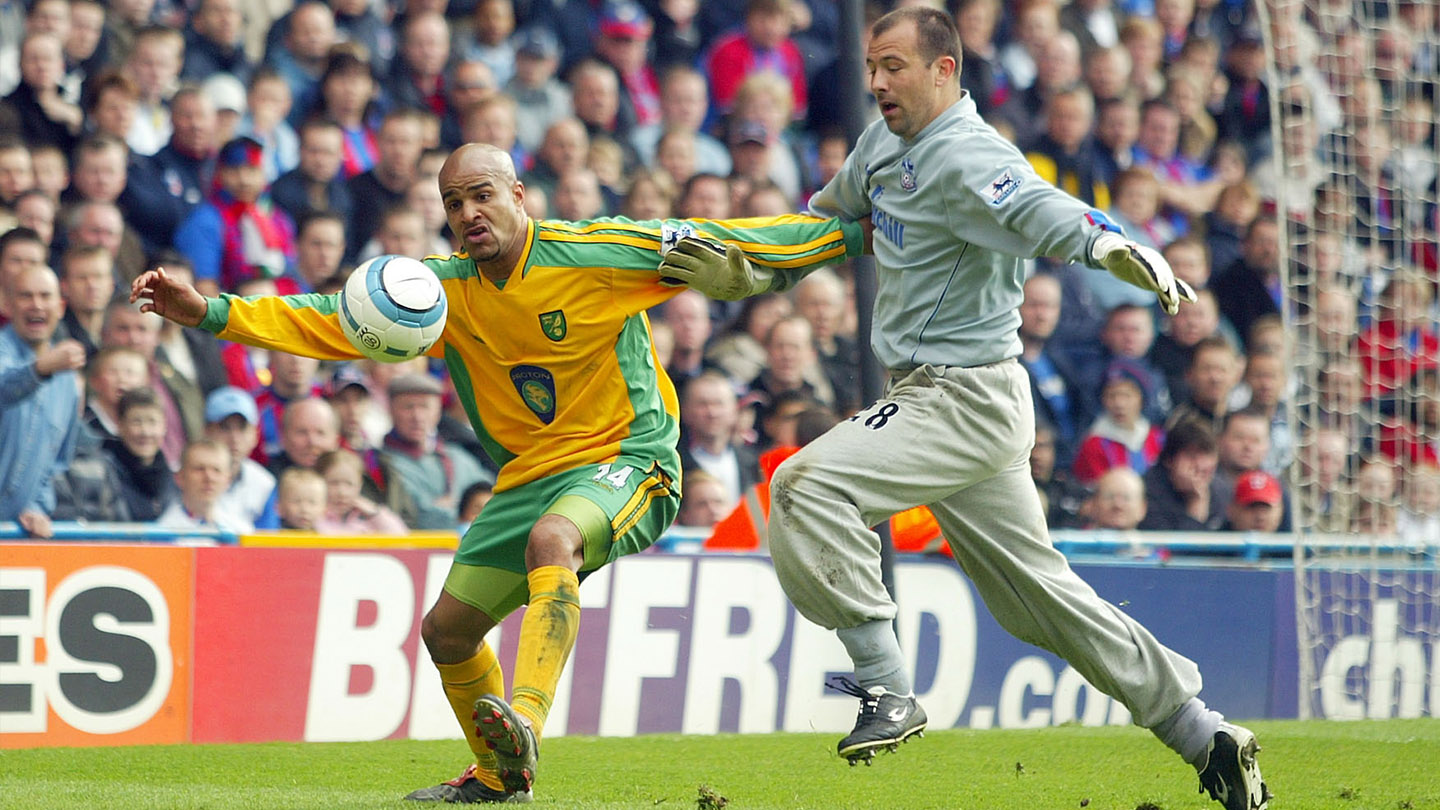 Famously, Király arrived during the same summer as Julián Speroni. But that story goes one step further with Gábor revealing that while he and the Argentine awaited their medicals, they sat alongside one another without knowing the other to be a ‘keeper. Ironic for two future teammates who would go on to be lifelong friends.

Footballing ‘law’ would suggest that two goalkeepers of a similar age at the peak of their careers, joining at the same time and wanting to make an impact at their new club, would naturally have a dislike of one another. However, that couldn’t be further from the truth – in fact, Király received a text from Speroni on the morning of our interview with the former Hungarian international.

“Julián is a very good guy. To work with him was an honour because he was always very professional, and he was a great servant to the club; we both had a great time together.”

Defenders will tell you they’re only as good as the goalkeeper supporting them, and the vocal presence and large frame of Király would settle any defence. But it is very much a two-way street with Gábor full of praise for the defenders who shielded his penalty area during his three years at Selhurst Park.

Despite asking if he could select them all, we pushed Gábor to choose his favoured back four in front of him from his time in south London, and with an endearing reluctance to, Király eventually opted for Danny Butterfield and Danny Granville as the full-backs with Tony Popovic being partnered at the heart of defence with Mark Hudson. 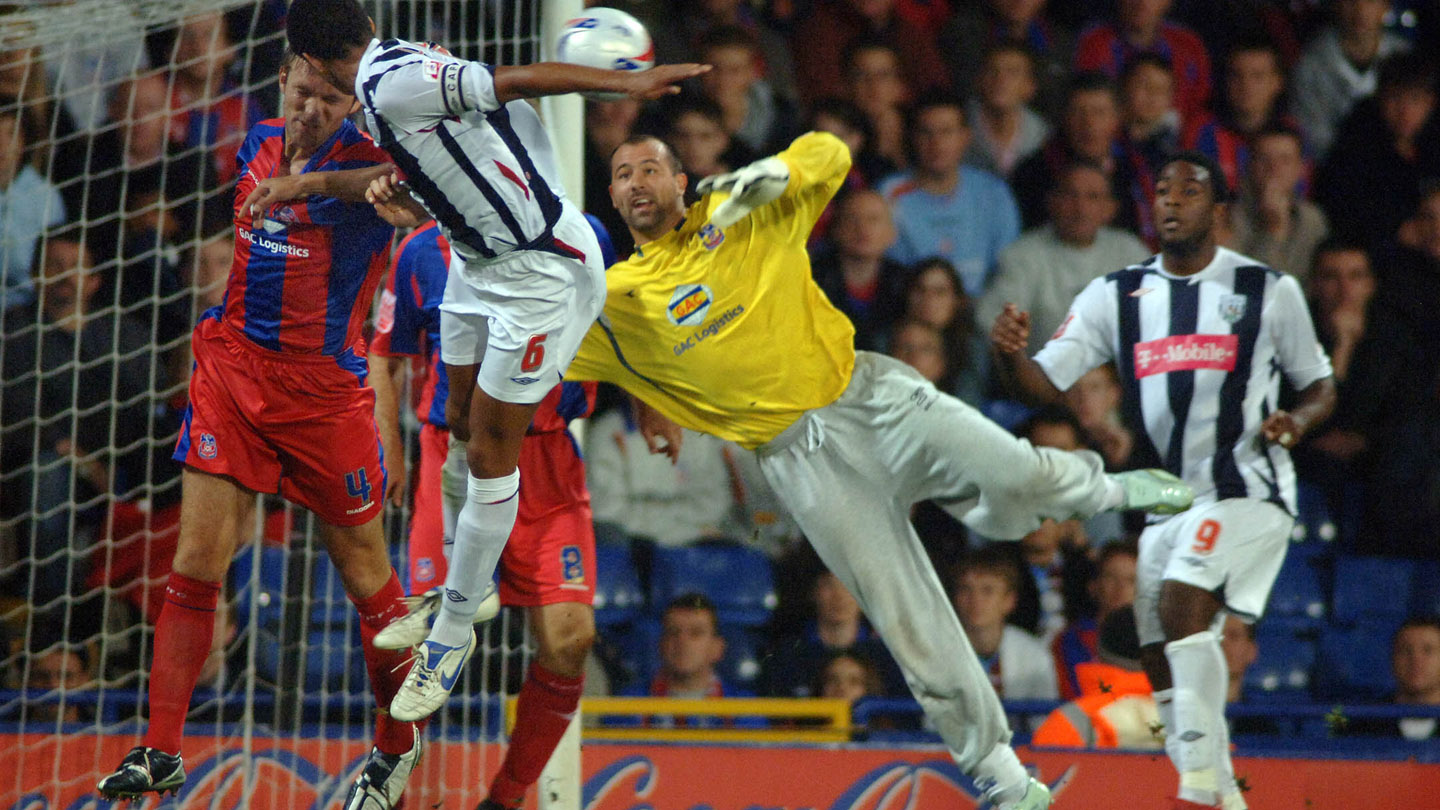 However, Király was also keen to acknowledge the impact of Fitz Hall and Gonzalo Sorondo in the middle of the back four during his spell with Palace.

For Gábor, the 90 minutes against Hertha Berlin in August represented something more than just the romanticism of two of his former clubs competing: it was confirmation to him that he is now a retired footballer.

Speaking pre-match, Kiraly said: “The day of the friendly will be a moment that I am marking as my first step after retirement, as I have only just left the game this summer. I want to enjoy this game, from the stands, without having to be too focused like I was as a player and just watch my two former clubs, from two huge, wonderful chapters in my life.

“I actually want to thank both clubs, because in total I was with for 10 years combined, and I learnt a lot from my experiences.”

Retired he may be, but a journey that began in 1993 ensures Kiraly’s career ends as a remarkable feat of endurance and passion for a game he played on his own terms.

The coming together of two of his clubs saw not only the Hungarian look on with nostalgic recollections about fond memories and experiences with either side, but also the Eagles compete with top international competition: a marker of how far they have come since the former ‘keeper last guarded their goal, fans and pride.

In summer, Kiraly watched on as his adopted south London club limbered up to burst into their seventh consecutive top-flight season; something near unimaginable in his time.

But thanks to the efforts of Kiraly, his peers and the players that followed in his dedicated mould, the boys from SE25 are doing it. And Gabor can watch on with pride.