You named Jaïro Riedewald as your ManBetX Player of the Month, and the Palace utility player's programme interview from the Arsenal game is now free to read below.

From asking to go out on loan to learning English thanks to Game of Thrones, here, Jaïro Riedewald chats with Dan Blazer about his journey from Amsterdam to SE25.

The interview’s scheduled with Jaïro Riedewald in Player Liason Officer Danny Young’s office for 9:55am. Upon arrival, Riedewald is already there waiting whilst Danny finishes up a meeting and instantly fills what could’ve been an awkward silence: “Hey, how was your new year?”.

Prompt and polite. These two traits of Riedewald’s are evident within a few seconds of meeting. The small talk continues whilst we wait for Danny's office to become available and Riedewald reveals he waited up until 11pm in the team’s hotel in Norwich on New Year’s Eve to phone his family back in the Netherlands as they saw in 2020 one-hour ahead of England. 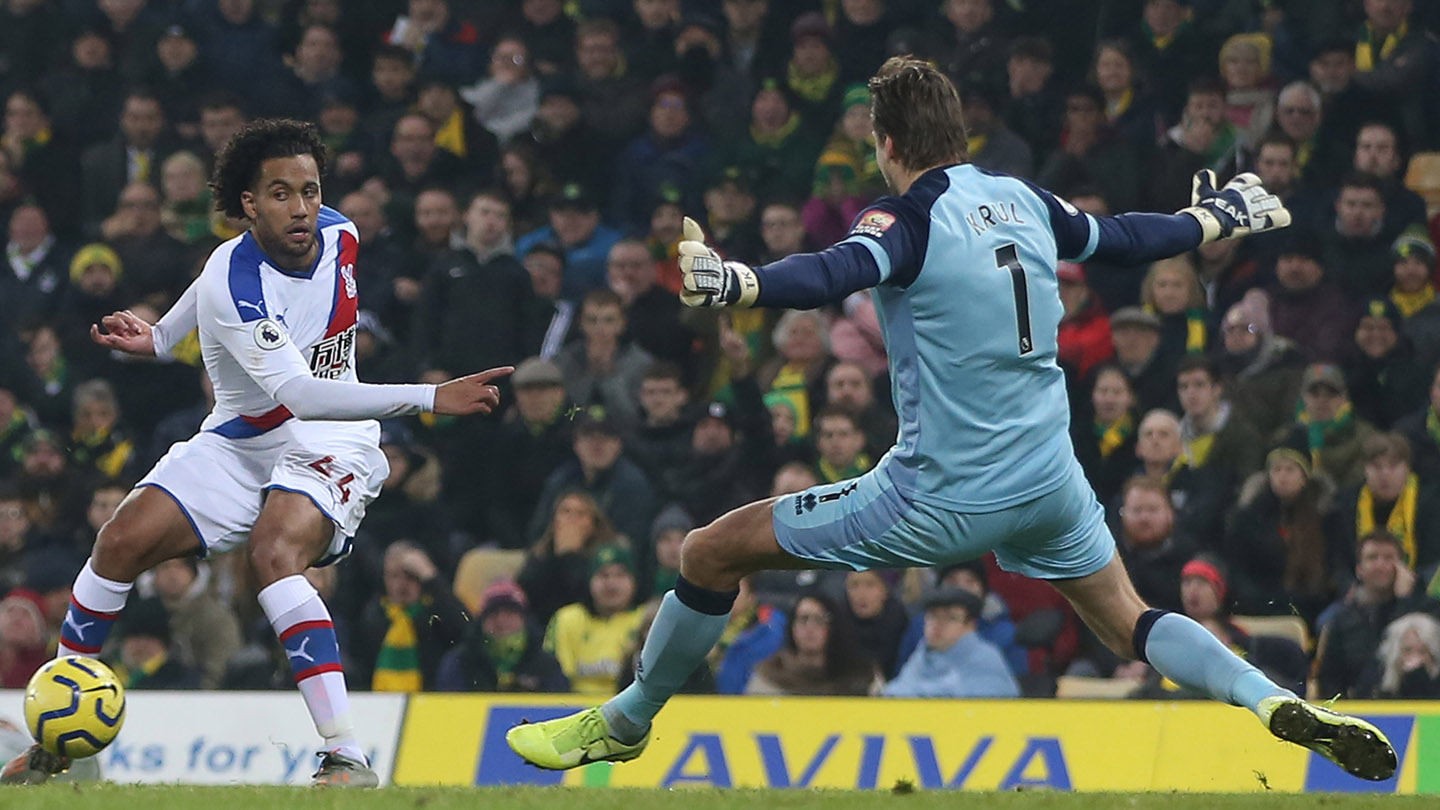 It then became clear that the office we had hoped to use was not going to become available anytime soon. The suggestion of doing our interview in the canteen is one Riedewald is reluctant to do, charming in his bashfulness at not wanting to have our chat in front of his fellow teammates.

Stumped with a location, we nervously put forward to Riedewald about doing our interview, well, right where we stand: the busy corridor at the Training Ground where you’re never more than a few seconds from a coach, member of the media or kitchen staff scuttling by.

“Sure,” Riedewald laughs as he glances round at our surroundings: a washing machine whirring in the background, a picture of Roy Hodgson on the wall and a man squeezing past us to deliver cleaning products.

Riedewald starts on his recent resurgence with, at the time of writing, 296 Premier League minutes under his belt so far this campaign having made no appearances in the 2018/19 season. He begins: “I wouldn’t say I ‘disappeared’ but I was on the bench, playing Under-23s or in the stands having travelled with the squad [as the 19th player]. 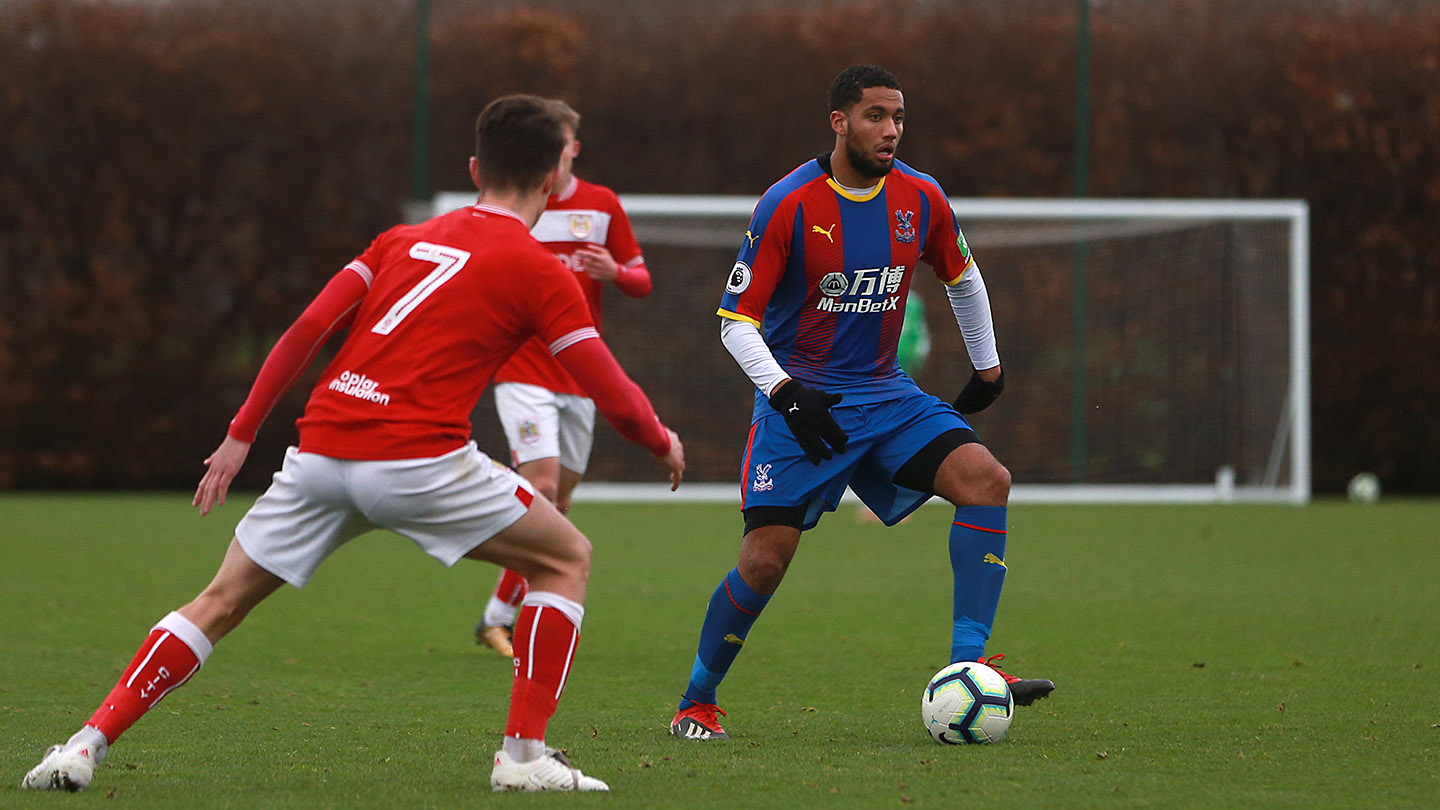 “Those are disappointing moments and it did mean that I tried to go on loan a few windows ago. But the gaffer told me he likes to have me around the team. I always kept my head down and continued to give everything for this club on the training pitch.

“The last few weeks I have played some minutes and I am very happy that the opportunity has come. I know I’ve been filling in [at left-back for Patrick van Aanholt]. It isn’t my favourite position for the team but everyone supports me well, with [James] McArthur coming across, Wilf [Zaha] ahead of me and the centre-backs. Everyone supports me to perform the best I can in this position because it is not my preferred one.”

Football is all about circumstance – just ask Aaron Wan-Bissaka – and several Development players have been handed first-team opportunities in the midst of the first-team thinning out. The impact of Brandon Pierrick against Norwich City and performance against Derby caught the eye and continued Palace’s famed Academy reputation. As a graduate from the world-famous Ajax Academy, Riedewald explains why the de Godenzonen have such a rich history of world-class talents emerging from their youth teams:

“It’s a long process. It’s not in one season. It is helped by very good former players, even someone like Johan Cruyff and Dennis Bergkamp, coming back to Ajax and bringing their opinions and vision about football and spreading their wisdom throughout the teams.

“From an earlier age you’re doing boxes of possession and everyone throughout the Academy knows what to do when you get a shot at the first-team because their system is no different to what you’ve been doing in the last five, six or even 10 years maybe.”

Coming through such a setup as a centre-midfielder, it is understandable if Riedewald doesn’t feel at ‘home’ on the left-hand side of the defence. However, his performances have betrayed his opinion: creative, assured and a reliable attacking outlet. But if the 23-year-old was to choose his favourite position, then it’s that defensive shield in front of the defence.

Riedewald offered an insight into his role during his time at Ajax, and reveals a common misconception is that Frank de Boer played him at centre-back. He clarified: “My dream position is in the midfield. Everyone says I was a centre-back at Ajax and on paper I was but in reality I played more in front of the defence because we played one-on-one at the back. 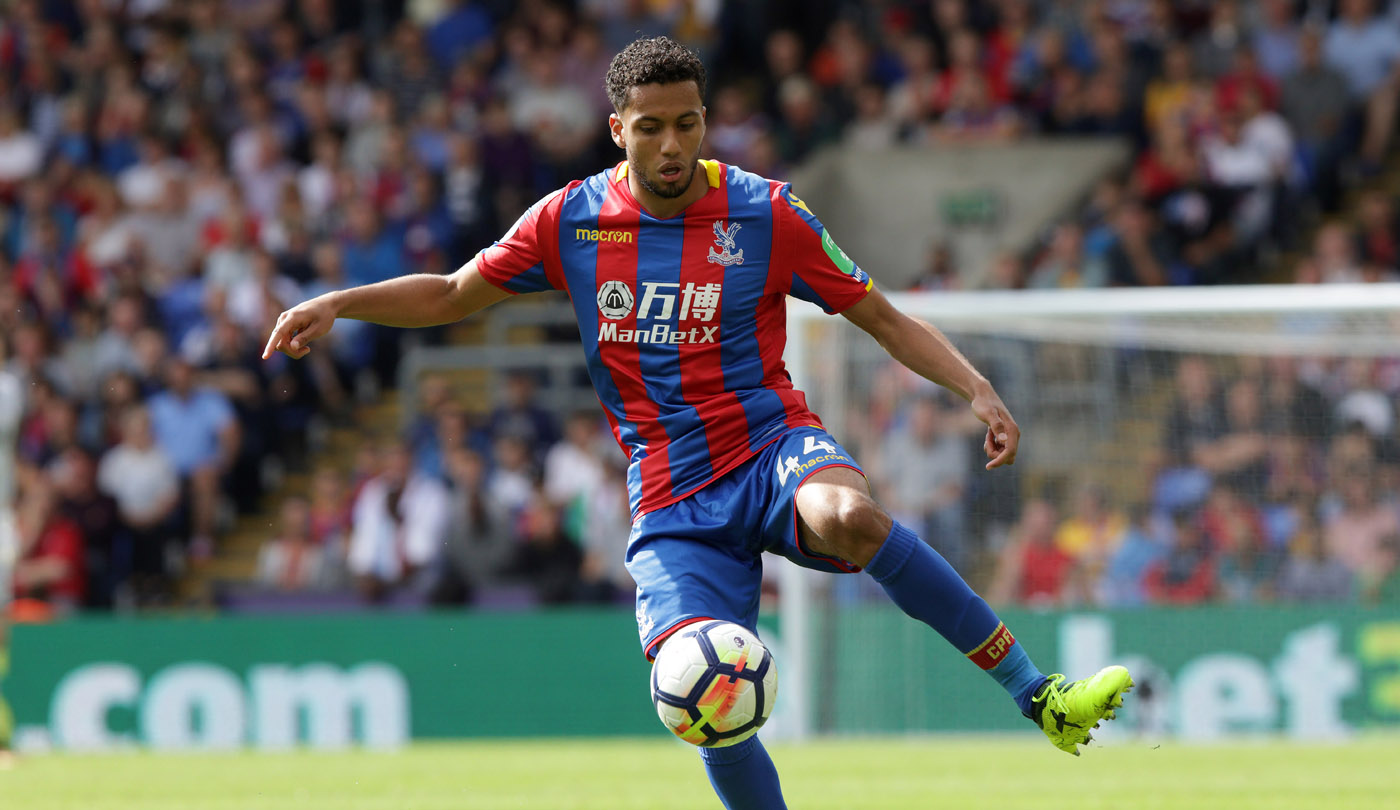 “I was always in the position to be able to go left or go right. I was in a ‘sandwich’ between the midfield and the defence. I like to have the ability to move across that line: to the left side or to the right to keep the ball going and moving quickly.”

De Boer’s use of Riedewald was one of the main reasons the then-Ajax player opted to link up with his former manager again in south London. He revealed: “I was in a tough situation at Ajax as I wasn’t playing. They told me I can leave if I wanted to. They were happy for me to stay but in my mind I wanted to go.

“I had the shirt No.4 and then when I came in after the summer I had No.36. They didn’t say anything and those small things get you thinking about what to do and the whole season in general was a tough situation.

“You have to start thinking about ‘What do you want to do with your career?’ and ‘Where do you want your career to go?’ but also you have a manager who hasn’t played you in almost a year and it breaks something in your mentality: ‘Why am I not playing?’

“That was the main reason I chose Frank de Boer at Palace; he convinced me to come as he had big plans. He told me about other Dutch players that were coming in, my friend Timothy Fosu-Mensah joined and Ruben Loftus-Cheek came in.

“And even Frank de Boer’s assistant manager, Orlando Trustfull, helped me out a lot in the Academy at Ajax as well.” 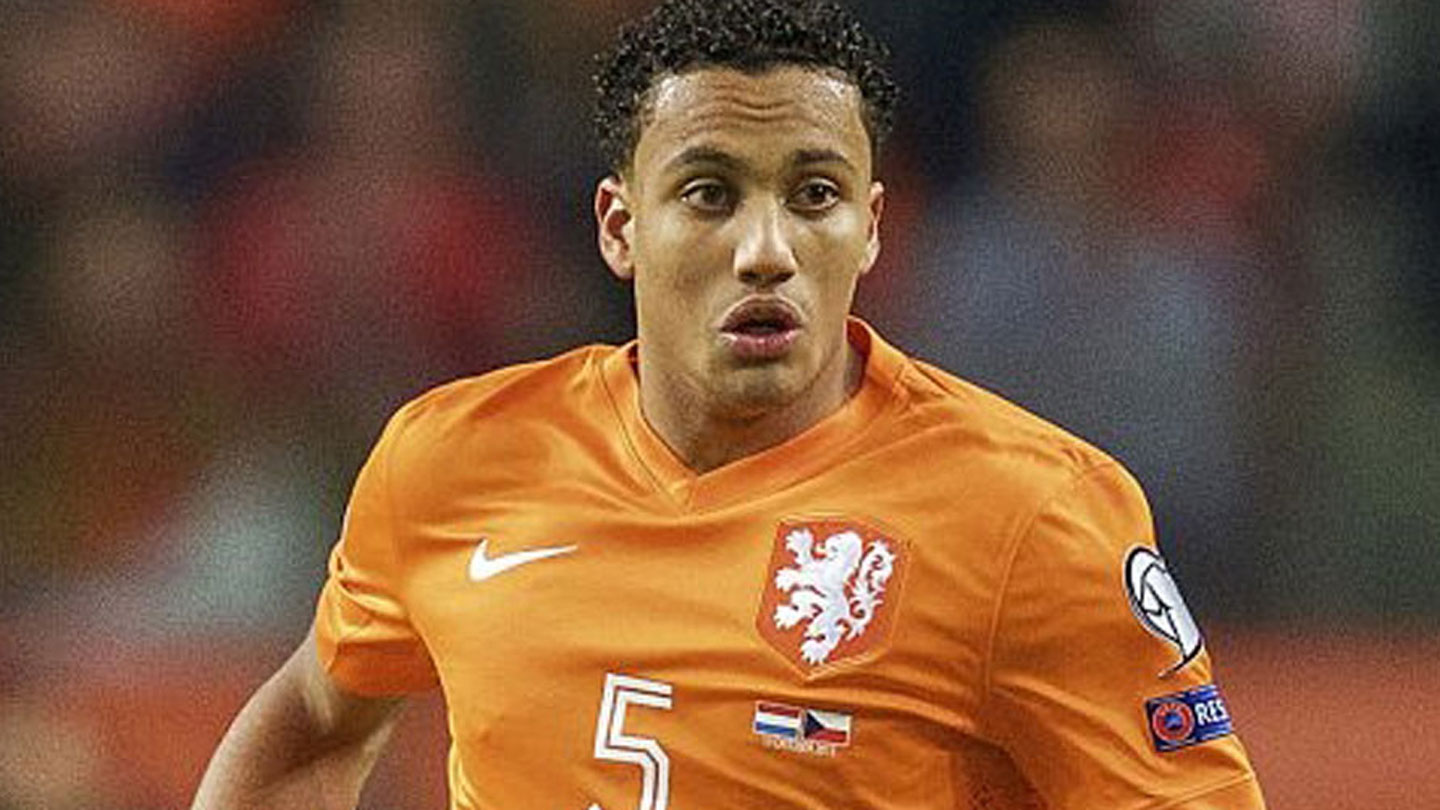 When Riedewald lists all the motives behind opting to leave behind Amsterdam for Croydon, it’s hard not to sympathise with what the situation must’ve been like when De Boer was fired by Palace just a handful of games into the 2017/18 season.

But that is football and Riedewald has no regrets: “For me, I thought it was the right option and I don’t regret it because when I came here I saw what kind of club it was: the fans are amazing, it’s a nice stadium and the atmosphere is great. It’s a warm club and I want to repay my price to the fans.

“I live in south east London. I am happy here. When I drive to the club I am always arriving with a smile, I am happy to be here. I am not angry at this club. I enjoy London, it’s a big city. I still haven’t seen everything. But I think it when I drive and I am looking at the window I see so many events or restaurants and things I’d love to do. It’s a little bit similar to where I am from, Amsterdam, but it is just 10 times bigger!”

Arriving as a 19-year-old, Riedewald’s decision to keep his head down, remain focussed and committed to Palace in any capacity he was required is admirable. It is optimised by his decision to stop returning home to the Netherlands, he reveals: “I used to go home a lot in my first year. But after that I thought it was better to stay here more, get my own house and learn the language more.” 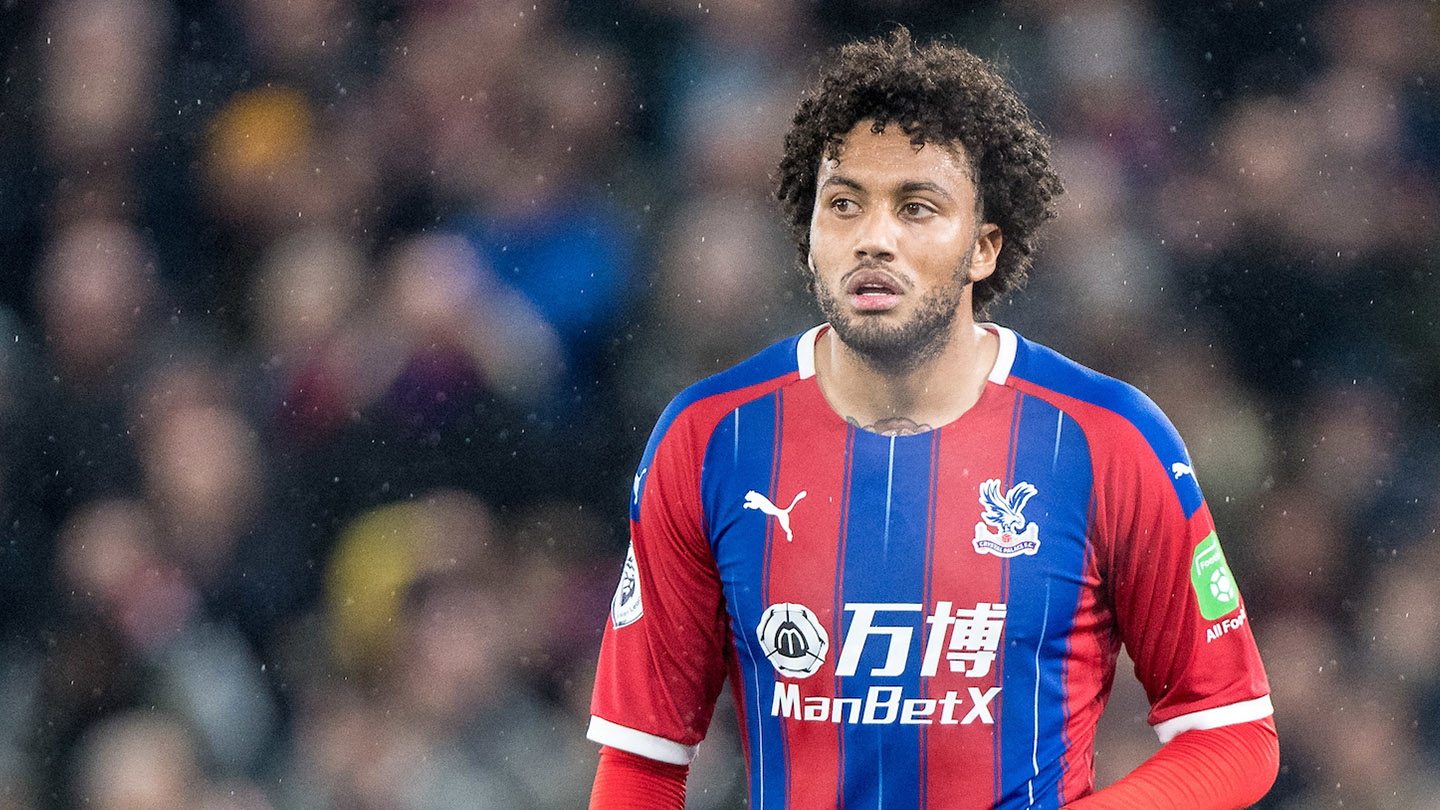 The next revelation from Riedewald is one that we struggled to comprehend: “I never had English lessons. I just picked up the language watching Netflix and movies. I have an older brother and he used to watch a lot of American and black-comedy movies and I started learning from there.

“It’s not Netflix but Game of Thrones helped a lot.” Talk then strays to the TV show itself and you can sense Wilfried Zaha and Riedewald have spent more than a few hours on the long away day journeys discussing the HBO show: “The last season they were hyping it up and they just lost it. Wilf loves it as well, we talk about it. It’s more of a lifestyle because you get so involved in the families.”

The final season of Game of Thrones was adapted from the novels: The Winds of Winter and A Dream of Spring. For Riedewald, the dreams of spring are very much here, and requests for a loan deal are now yesteryear’s wintry winds.

You can still piurchase a digital version of the Arsenal programme below for just £1.99. This will land in your email inbox in seconds and is compatible on tablet, laptop, desktop and mobile phone.