At the end of 2018/19, Julian Speroni bid an emotional farewell to Crystal Palace, his club of 15 years.

Today, read his final written interview as a Palace player - with Jules speaking to the official Palace programme just days before waving goodbye to Selhurst Park.

Julian Speroni sits in a grey, empty and sporadically heated room. He talks about breakfast, his children and mate, an Argentinian tea he drinks every morning. He even explains where to buy it from.

He talks with ready conviviality, propped up on a plastic office chair before heading out for a morning of training - aged 39 - with a Premier League football club.

The setting is not befitting of a man with his stature looking back at nearly 15 years weaving some of the most iconic threads in the tapestry of Crystal Palace’s history.

Probably a little cold but reluctant to make it known, Speroni - an ever-present figure in thousands of south Londoners’ lives for a decade and a half - then spends the next 30 minutes delving into the highs and lows of a remarkable career, often veering into what it is that connected him with a small, passionate fan base almost 7,000 miles away from his hometown.

He gets things rolling right where it all began: Saavedra, Buenos Aires.

“I was born in Buenos Aires, the capital and a big city a bit like London. I had a lot of friends around and a nice childhood really. I had working class parents but we were pretty happy.

“Not many games were shown at the time but when we had a chance to watch a game it was always Manchester United or Liverpool. The league that I watched most growing up was the Italian Serie A because that was the most popular in Argentina.

“I didn’t know much about Crystal Palace...” 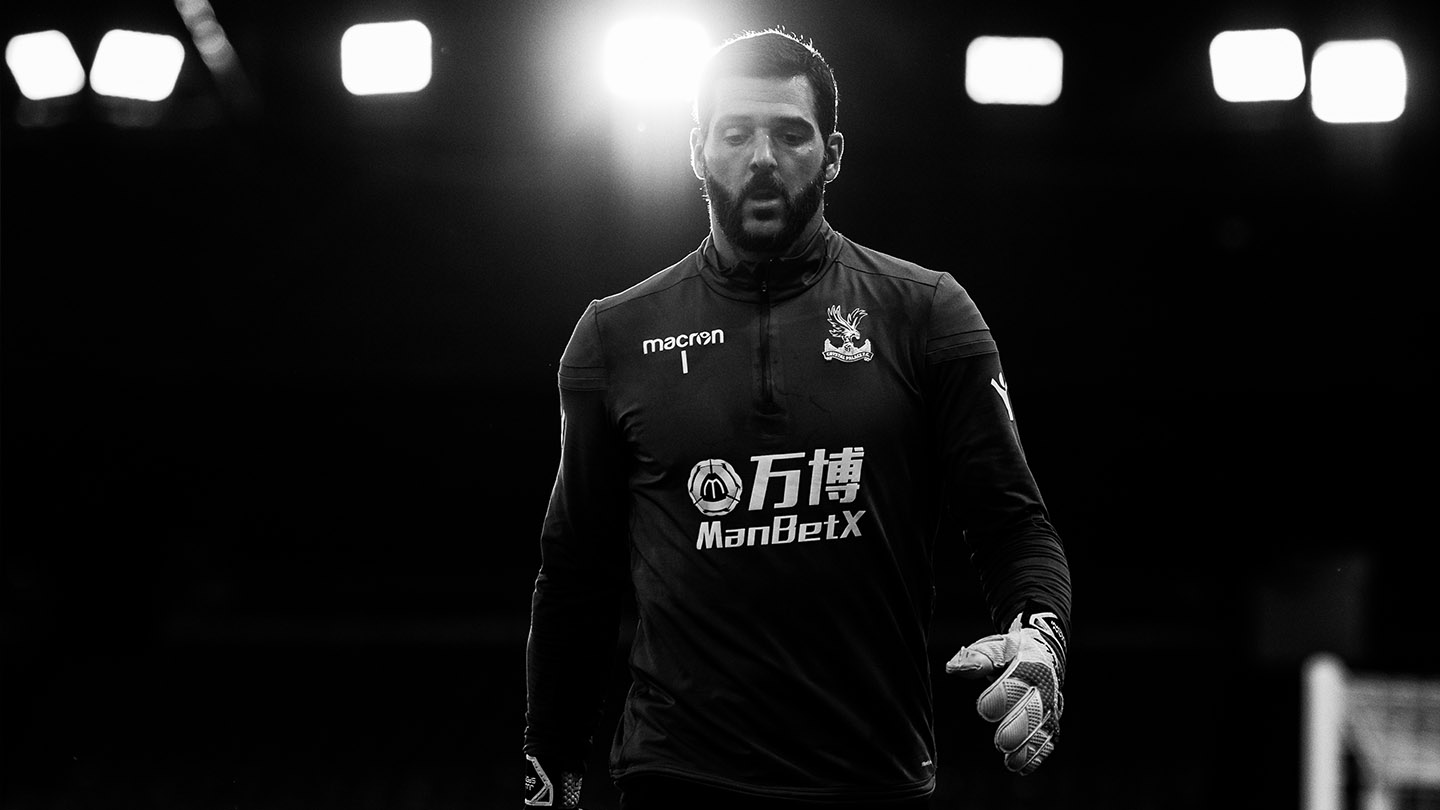 Fast-forward from childhood - when full-sized posts for an eight-year-old goalkeeper would threaten to crush the earliest hopes of an infant career - to early adulthood, and Speroni would find himself in Dundee having sent off a homemade VHS of his finest saves to the Scottish club’s manager, Ivano Bonetti.

Initially unable to speak a word of English, it didn’t take long for the young Argentinian to write his name into the annals of Dens Park, but by the time Speroni had worked his way into the hearts of enough Dark Blues to earn a place in their Hall of Fame 11 years later, Palace had come knocking.

Knowing of then-manager Iain Dowie’s interest, Speroni began keeping an eye on the Eagles’ progress. On holiday watching his prospective club battle with West Ham United in the 2004 play-off final, he would decide to commit his future to the south London outfit, unaware of exactly what it would hold for him and his family over the next 15 years.

“I never planned to be here that long,” he admits. “Normally players tend to be with a club for three or four years and then they move on.

“Year after year after year, I kept renewing my contract and then I find myself 15 years later, I’m still here and still enjoying playing football. As I said before, some things don’t have a price.”

Despite a turbulent start to life in the English capital, Speroni had perhaps unwittingly found the club he would go on to call home and began developing a now unbreakable bond with Palace’s embracing fans.

“How they welcomed me when I came firstly, it was brilliant. It’s not easy to come from abroad and settle yourself in a new place where you don’t know anybody and you don’t know the customs of the place and the traditions and a lot of different things. All of that made our relationship grow. 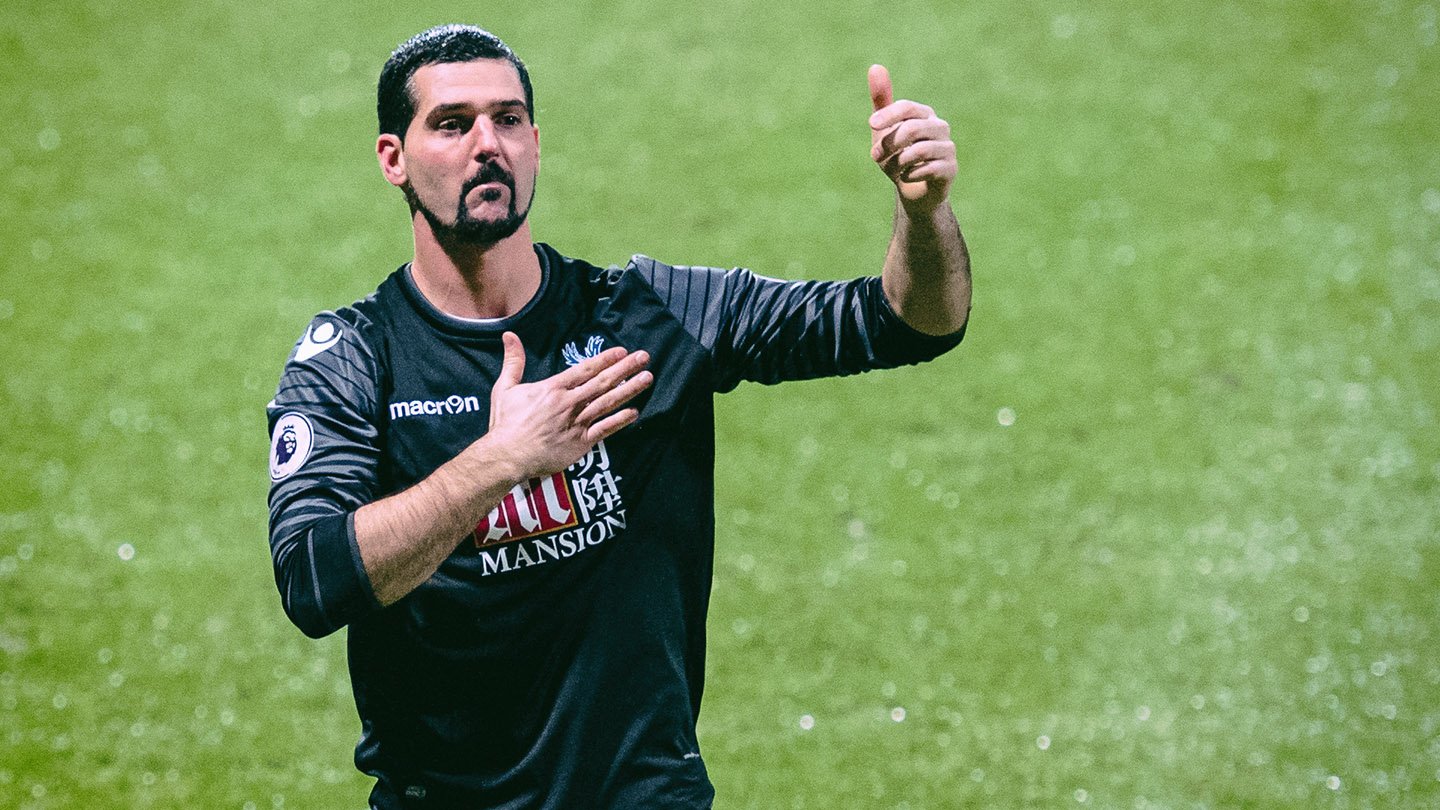 “I think my relationship with the fans developed quite early in my career, obviously not from the beginning because it takes a little bit of time but I remember playing when Gabor [Kiraly] wasn’t playing in cup games and I used to feel that appreciation from the fans.

“We’ve been on a long journey together I feel. They know that.” 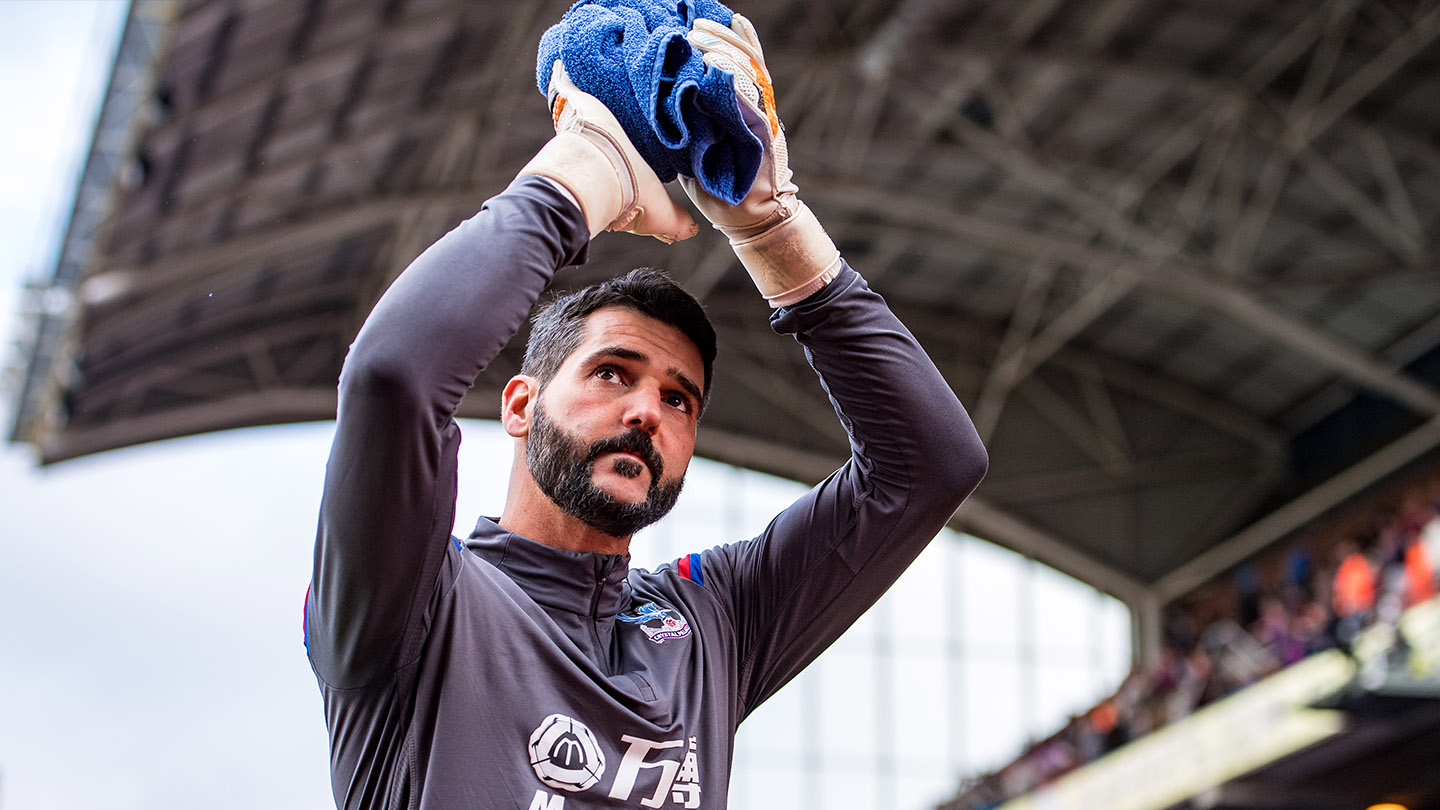 But Speroni’s career with Palace certainly hasn’t been one without its challenges and the veteran ‘keeper has experienced relegation, administration, near-collapse and the stewardship of 12 permanent managers in the course of his spell.

Looking back on perhaps the toughest point in Palace’s recent history, Speroni recalls how avoiding relegation in 2010 felt for a man right at the heart of the action:

“It was tough. Coming into that game we’d had the chance to secure our Championship status in the match before. We played West Brom and needed to win but we drew 1-1. We had the ball cleared off the line in the last minute and we thought: ‘That was the chance, that was the chance,’ and we would have been safe going into the last game of the season but that wasn’t the case.

“Those games are not the ones you enjoy coming into. Those games are tough; really, really tough. Our careers are on the line as well. If you go down a division, everything goes down and your pedigree goes down as well. But also for the people at the club, they depended on us to get a result there because they didn’t know if they’d have a job later.”

Thankfully, however, jobs were saved along with the club as Speroni and his team secured Palace’s survival by holding Sheffield Wednesday to a 2-2 draw, Alan Lee and Darren Ambrose the goalscorers with the Eagles’ No.1 characteristically doing his bit to guard the Palace goal. 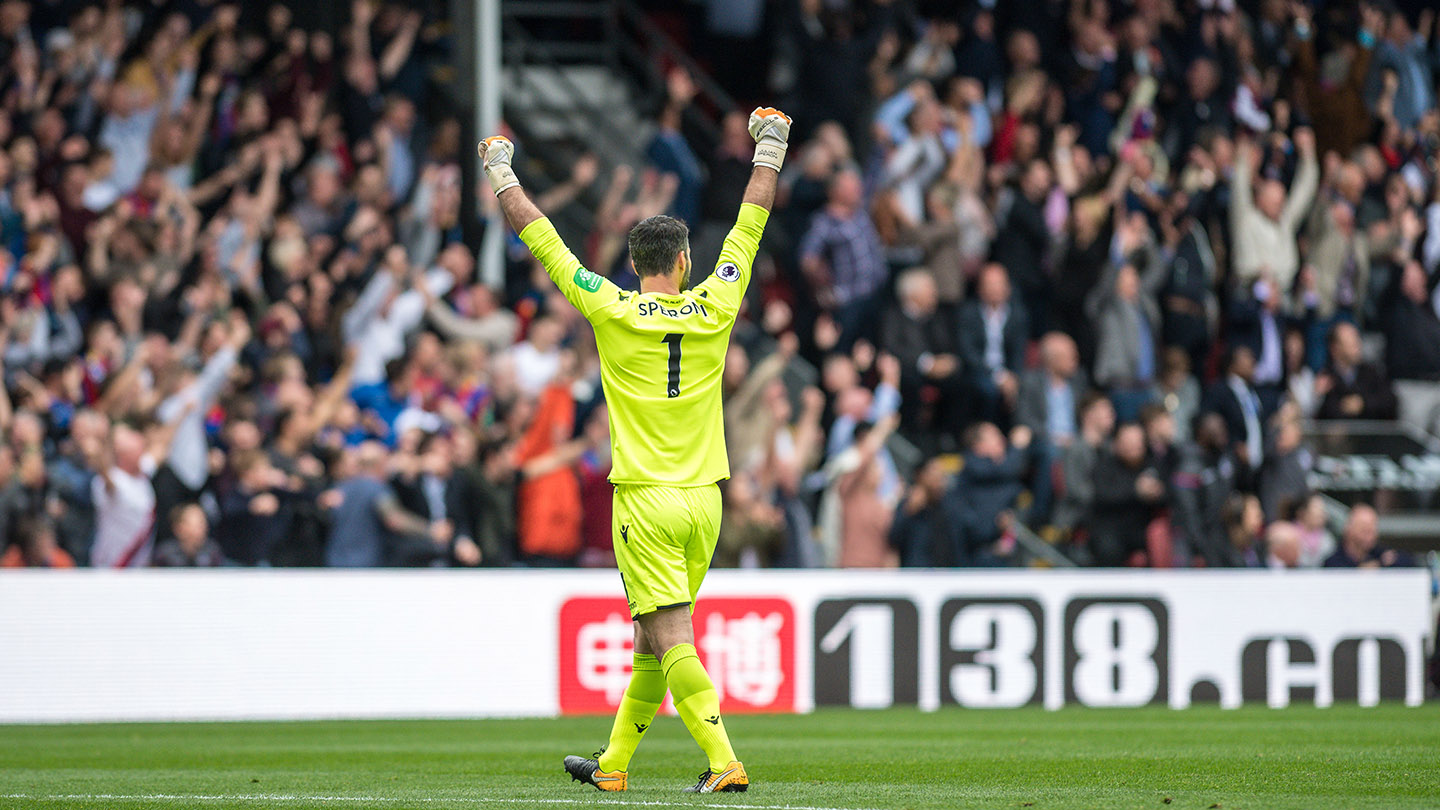 A save against Luke Varney - described as “excellent” by the BBC and, naturally, “not spectacular” by the man himself - kept Palace in the game at 1-1. Ultimately, it seemed to epitomise what the shot-stopper means to his club: vital, modest and working entirely for those around him.

“I had to make it because if you end up 2-1 down, everything changes. People ask me: ‘What’s the best save you ever made?’ It’s hard to pick one but I always remember the important saves in important moments where by making that save you’re helping the team to achieve something important.”

For Palace fans, then, the bank of Speroni’s best saves is close to overflowing, and while the shot-stopper will forever be known for selflessly shunning the spotlight, two moments from 2013 stand out as truly remarkable, even in his book.

“The one against Brighton [& Hove Albion in the play-off semi-final] is just a reaction. One-on-one, I made myself big and then that ball was going over my shoulder and I just threw my hand at it and luckily it was quick enough to just touch it and deflect it onto the crossbar.

“Obviously in the play-off final, I had to make an important save there as well. That didn’t look spectacular but believe me, that was a tough save to make because I was going completely the other way and I had to come back to my left.

“I didn’t want to touch him [Troy Deeney] because it would have been a penalty so I had to try to get my hand across him. I lifted the ball and I was hoping for someone, my teammates, to clear it because I wasn’t sure who was in front of me.”

Winning that particular match meant that Palace had hauled themselves from the brink of relegation and financial catastrophe to Premier League football in just three seasons: a fifth of Speroni’s time with the club.

Throughout that era, the shot-stopper has been ever-present; always there on Saturday afternoons offering customary applause in response to the Holmesdale’s sociolect-afflicted version of Do The Conga pre-kick-off.

Sitting slightly cold in a grey, empty and sporadically heated room, Speroni seemed to be offering one last round of applause to the Holmesdale and its surrounding stands at Selhurst Park, returning persistently to the fans and what their steadfast support has meant over the last 15 years. 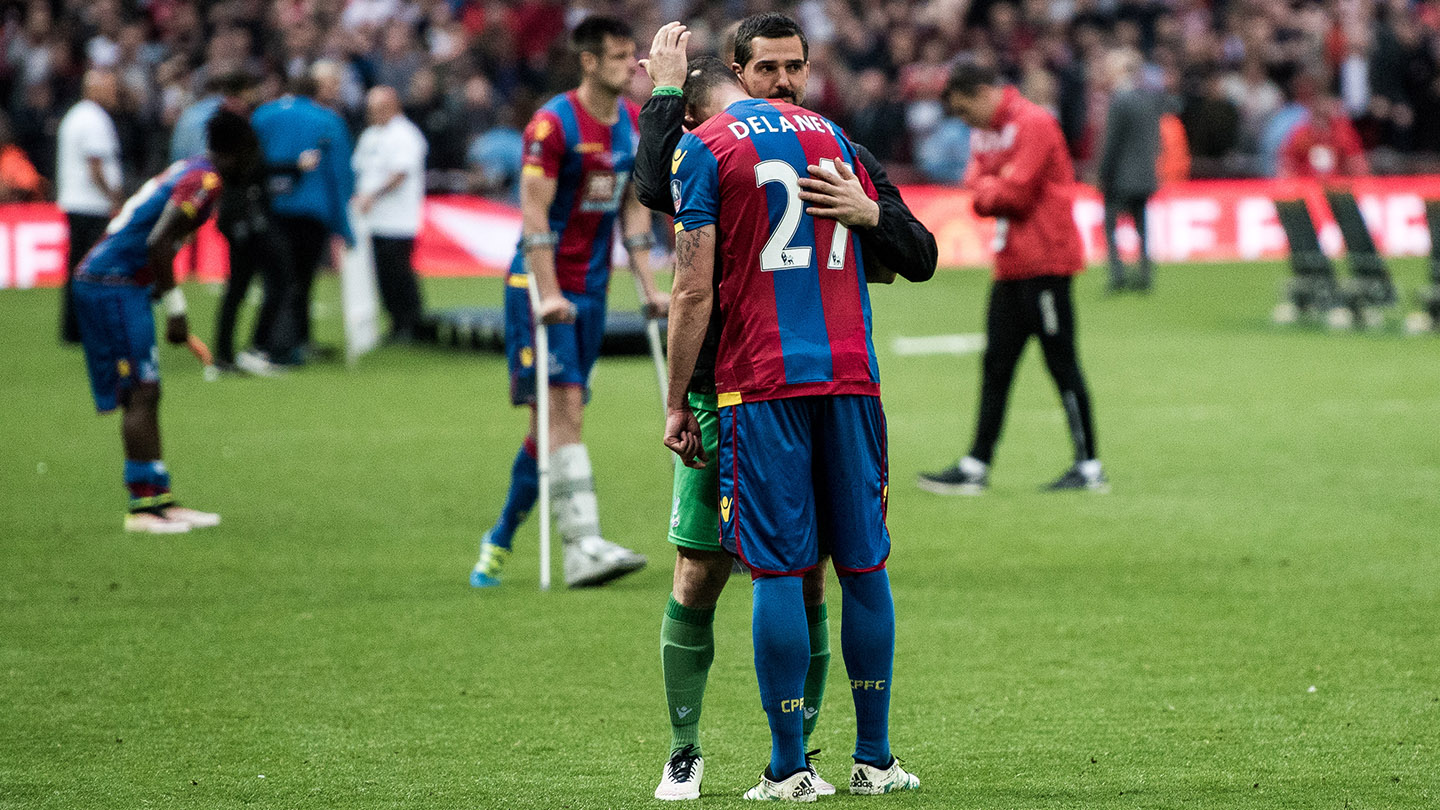 Looking back over his career, Speroni was only ever going to focus on one thing as he rounded his time off: you, Crystal Palace’s support.

“Time has gone so quickly,” he says. “2004 and 15 years later, it just went in the blink of an eye. I went through everything really, it was a rollercoaster of ups and downs but I enjoyed every minute.

"There were tough times of course, but that’s part of the game and that makes you develop. It makes you a better player, a better person - hopefully - and it’s a journey that I guess footballers have to go through.

“There’s nothing I can say really more than ‘thank you for everything’. We’ve been through so much: faces have changed, players have changed and owners have changed, but the important thing is what we’ve done together for the football club, that’s the main thing. We all disappear, we all go, but the club will stay here for many, many, many years so hopefully we built some good memories together.

“One day when I won’t be here anymore, hopefully the fans - if they think of me, if they remember me - they will think: ‘Okay, this guy performed at this club for service. He gave everything he could.’ 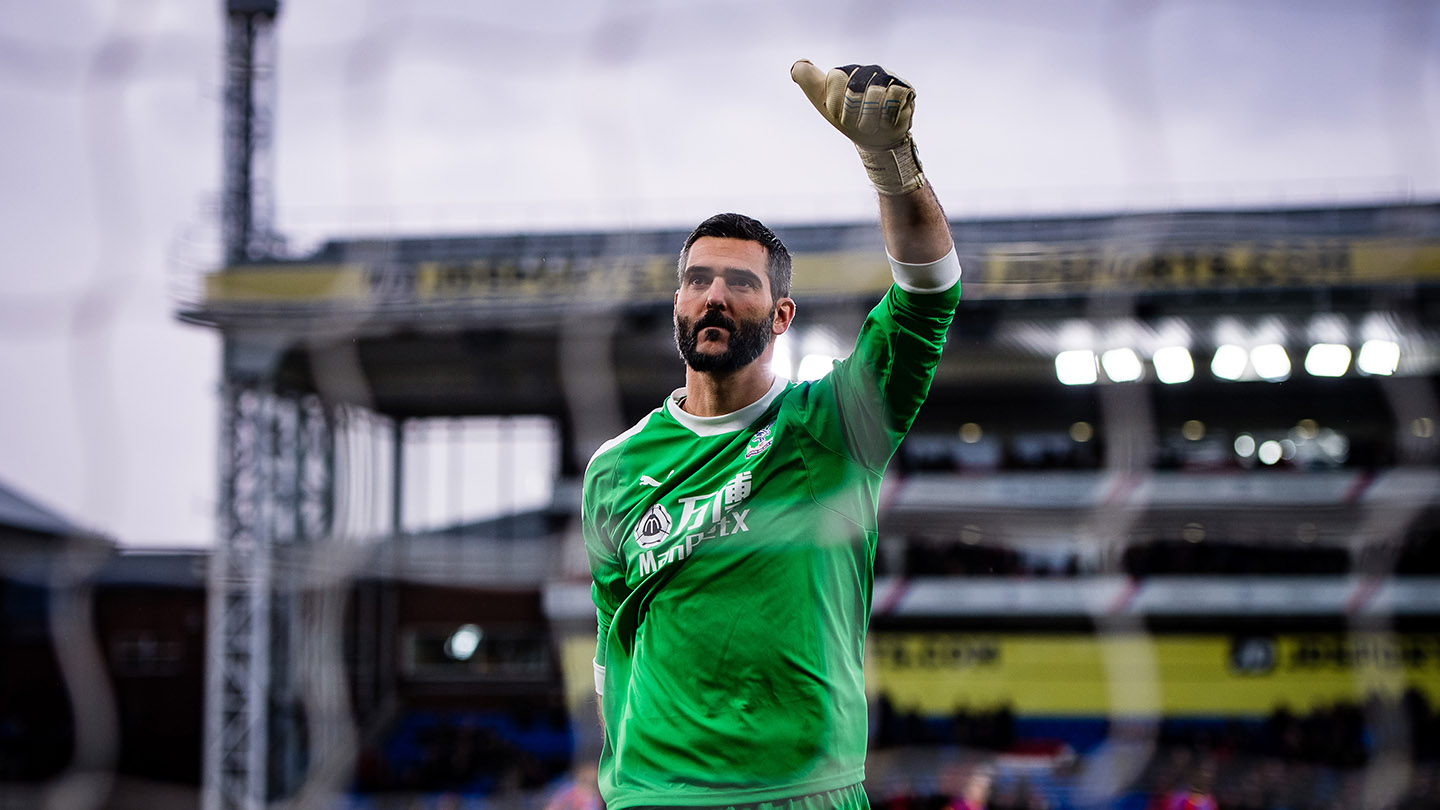 “A big thank you to everyone for all these years.”

That doesn’t read right. It seems strange that at the end of a decade and a half serving this club, Speroni feels it is his duty to say thank you. Far from it. For being south London’s No.1 through everything, thank you, Julian.

You can listen to Jules' full interview now via the Official Palace Podcast by clicking here.

READ NEXT: Zaha: 'Speroni is a Palace hero for sure'