Crystal Palace Under-23s fought back from two goals down with ten minutes to go to draw 4-4 in a thrilling game with Aston Villa, much of it in the most trying of conditions.

Palace started well in the torrential rain, delivering several dangerous looking balls into the area which were scrambled away.

The conditions could hardly have been worse, with sheets of rain making the surface fast and slippery, but both sides maintained their composure on the ball.

Villa had the best chance of the opening exchanges, as Kaine Hayden and Charlie Farr combined well on the right to bring Villa forward. Working the ball across the field, Jaden Philogene-Bidace went down under a challenge, but instead of pointing to the spot, the referee – perhaps harshly – booked him for diving.

Villa made their early endeavour count after 15 minutes, and it was Farr and Hayden once again who combined to give them the lead.

Lining up a free-kick from twenty-five yards out, Farr unleashed a dipping effort that was impossible for Jacob Russell to handle in the soaking conditions, and Hayden was on hand to convert the rebound.

Moments later Villa were inches from a second, again from a set-piece. This time it was Carney Chukwuemeka who was fouled on the edge of the penalty area; he picked himself up to take, and saw his effort cannon off the underside of the crossbar. 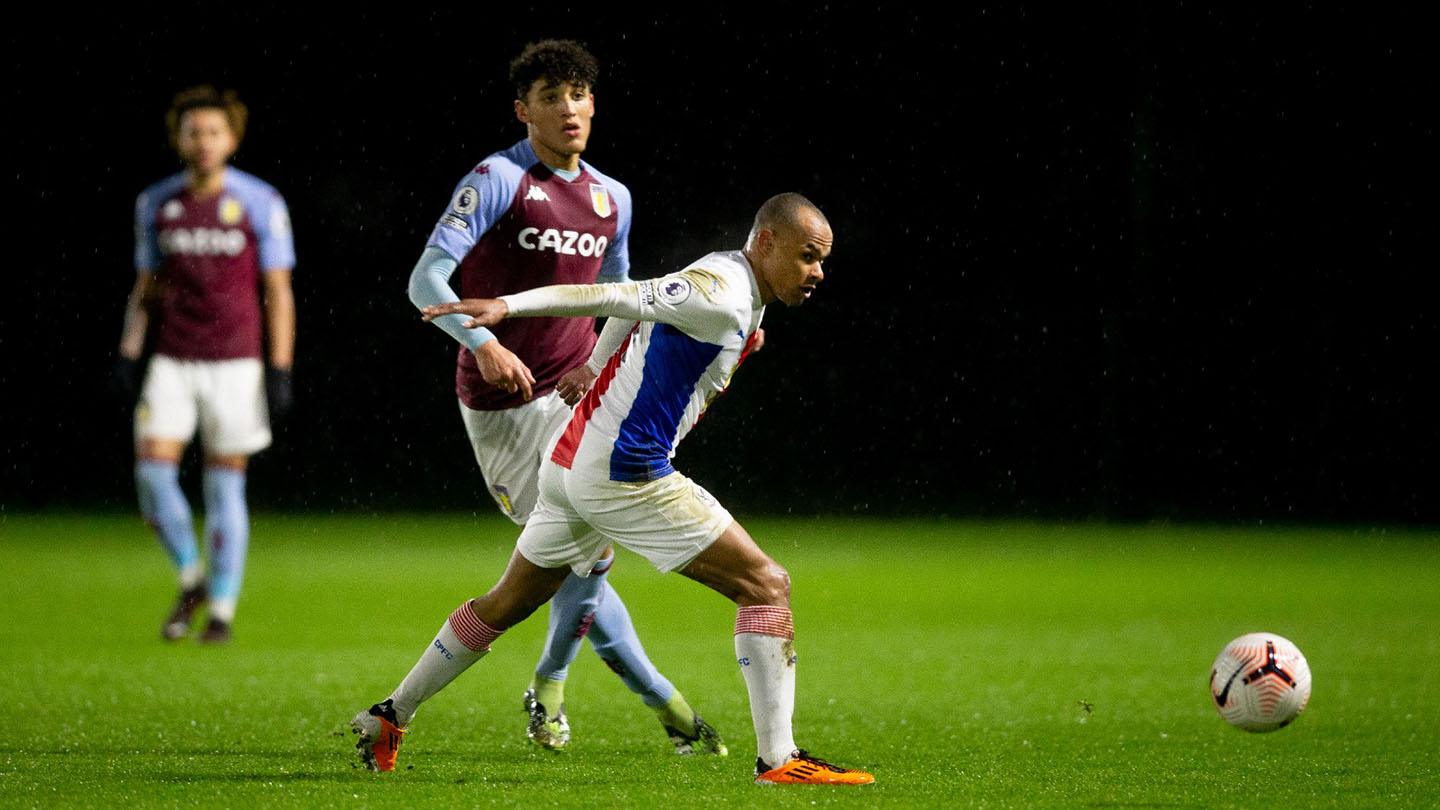 But it was Palace who were soon level, and once again the pouring rain played its part. Receiving a back-pass just a couple of yards out, Villa goalkeeper Filip Marschall’s heavy touch ran away from him on the wet surface, and John Kymani-Gordon reacted sharply to nip in and power home.

Villa retook the lead before half-time. Philogene-Bidace’s shot was too powerful to hold, and this time it was Farr to react fastest and slot home the rebound.

It was almost three immediately after, and only an inspired piece of goalkeeping from Jacob Russell prevented a goal. Racing down the left, Chukwuemeka’s cross found Bradley Young six-yards out. The striker opened up his body to guide the ball home, but Russell got up superbly to block the effort, before the ball was scrambled away.

Palace refused to let their heads drop, and came out for the second-half with renewed intensity.

It paid off immediately, as Reece Hannam’s cross whipped in from the left-hand side found a stooping Harlem Hale to head the ball in, and level the scores just 21 seconds after the restart.

Matthews almost completed a remarkable turnaround minutes later, when he struck Hale’s lay-off on the volley and forced Marschall into a smart save.

Hale was causing real problems for the Villa defence, making space on the edge of the area to fire just over, after his first shot was blocked.

However the hosts were a constant threat, and retook their lead via a familiar source. Picking up the ball on the edge of the box, Aaron Ramsey slipped in Farr, who clipped the ball over Jacob Russell to get his second of the game.

Palace continued to heap pressure on the Villa goal, with Brandon Aveiro adding a fresh burst of energy from the substitutes bench.

With ten minutes to go, Villa extended their lead, a slick team move finished off by the impressive Chukwuemeka, whose curling effort found the back of the net.

Palace once again refused to be beaten. Straight from kick-off, Aveiro strode forwards and smashed the ball into the top corner for the seventh – and perhaps the best – goal of the evening.

Their belief was not unfounded, and with minutes to go the unlikeliest of comebacks was completed. Once again it was Aveiro at the centre of the move, this time the provider as he broke into the area with a series of feints and step-overs. Crowded by defenders, he laid the ball back to Jude Russell in space, who finished with aplomb.

It's a draw that will feel like a win for Shaun Derry's side, who trailed on three occasions and were two goals down with just ten minutes to go, but fought back for a memorable point.