It was a season of incredible determination, and below Coral Haines, Emily Orman and Molly Sharpe recall the highs and lows to show how far they came in the latest FA Women’s Championship campaign.

Palace Women started their 21/22 season by hosting Bristol City at Hayes Lane, a match which Coral Haines recalls as her favourite of the season.

“The best game for me has to be the first game of the season against Bristol,” she says. “They had just been relegated [from the Women’s Super League] and were favourites.”

Bristol City were relegated from the Women’s Super League, seeing them compete as one of the most testing sides in the Women’s Championship. They would go on to finish third, one place ahead of Palace on goal difference, making this game an eventually crucial one.

Haines explains the 4-3 win: “It was a seven-goal thriller, with a brilliant goal from Kirsty Barton and I got a brace to start off the campaign with three points.”

September featured three games, including two of the season's most difficult away trips.

First up was a visit to the Princes Park stadium to face London City. This saw a debut appearance for Emily Orman, the loanee goalkeeper from Chelsea. Like the first game of the season the Eagles opened the scoring early – four minutes into the game – but London City were quick to equalise just seven minutes later.

The hosts then took the lead right before half-time thanks to an own goal from Leanne Cowan, and despite various opportunities the game ended with Palace facing their first loss of the season.

This would be the star of a briefly troubling period for the south Londoners, but set the tone for the early part of the season: Palace matches would be tightly contested. In fact, of their first 11 games, there was only ever one margin greater than two goals either way. 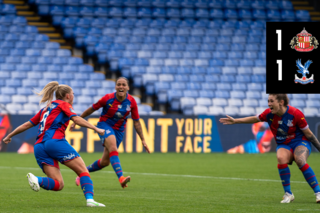 After London City came Sunderland, with hosting the fixture at Selhurst Park. The two sides wouldn’t be separated until Millie Farrow put Palace in front in the 67th-minute. A short five minutes later Sunderland were level and the game finished as a draw.

The final game in September came on the road against Liverpool. This time it was the home side who took the early lead, with Shiv Wilson equalising through a long-range shot, but parity would only last a few minutes. Liverpool regained the lead inside the first-half and Palace pushed for another equaliser, but the Reds remained firm for almost an hour, and the game ended in defeat.

October began with Palace hosting Sheffield United: a tough fixture which had ended in defeat twice the season before. This game was tight, however, with both teams having two shots on target, and ended as a draw. This provided Palace with their first of three clean sheets and set them on a season-defining run of seven games unbeaten.

A trip to Coventry United awaited the south Londoners next as they looked to pick up their first points on the road. At the end of a five-goal thriller that Palace dominated possession-wise, Wilson bagged to gift her side their first away win and three vital points.

A Halloween fixture came next, facing Watford at Vicarage Road. Palace looked certain to pick up all three points with goals from Kirsty Barton and Sophie McLean, but two successive goals in 14 minutes left the teams sharing points, with Palace ending the month unbeaten.

November was a triumphant month for Crystal Palace and proved vital in their league campaign, picking up nine points from a possible nine. It took Palace up to the midway point of the season, a lengthy Christmas break, as the league’s form team.

A tricky fixture opened the month with league leaders Durham visiting Hayes Lane. A tremendous performance from Palace saw them go 2-0 up inside the first 20 minutes. Durham pulled one back late on but a 94th-minute Millie Farrow goal sealed victory, stunning the league leaders.

Just a week on was the south London derby with Charlton, for which Palace drew a large crowd and they looked to continue their unbeaten home run of four league games. After an impressive display Farrow gave Palace the lead 10 minutes in and Barton doubled the advantage just before half-time.

Although Palace dominated play, Charlton fought back to 3-2, but this wasn’t enough for the Addicks and they slumped to defeat.

Haines recalls her moment of the season as Farrow’s 73rd-minute winner: “[Coach] James Marrs was shouting at us to keep the ball in the corner for the win, but we went for the third to kill the game off. The celebrations were unreal.”

After two impressive wins a trip to Blackburn rounded off Palace’s month. Another early goal, this time from Bianca Baptiste, put the south Londoners one goal up, and the second came late in the closing stages from McLean. Blackburn pulled one back, but it was too late, and the points were awarded to the Eagles.

The first game after Christmas saw Palace face Durham up north, and they would continue their 2021 form for the new year. It was a familiar setting for former Wildcat Molly Sharpe, who calls this her favourite fixture of the season.

“We made the long drive up and ended up beating them 3-2. Durham are obviously a brilliant side so we knew it was going to be a tough one.

“Having my family there and scoring in front of them meant everything. It was one of the most defining points of the season beating them twice, and it meant a lot to the whole team.”

Flying high on 21 points Liverpool made the trip down to Hayes Lane. It was first v third and a huge fixture for Crystal Palace. The Reds piled on the pressure and walked away with three points after a 4-0 victory. Until then Palace hadn’t lost by more than a goal, and this stinging defeat would have an impact on their season for a brief spell.

But in the short-term they bounced back emphatically against Lewes. After a dominant effort Palace walked away 3-1 winners with Haines topping off the win from the penalty spot. It was the perfect response from Davenport’s charges and the end of the season only highlighted Liverpool’s ability to win, as the Reds topped the league by 11 points – with 49 goals from 22. 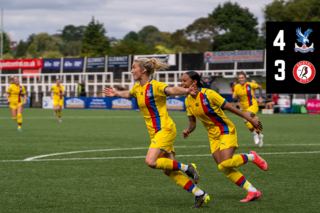 February was to be a difficult month for the Eagles, the hardest in the season upon reflection.

The month started off at Bristol City and Palace went a goal down after less than a minute. Things went from bad to worse when Palace walked away losing 4-0.

London City smelt blood in the water and were looking to further their standing near the top of the table when making the short trip to Hayes Lane. Palace started brightly but the visitors took the lead early on.

This goal knocked the Eagles’ confidence and moments later they were 3-0 down. This was a tough place to fight back from, and although Palace did indeed net a goal of their own, they ended up forced to accept a 5-1 defeat.

To finish off the month Palace travelled north to face Sunderland. Looking to bounce back from two disappointing results Davenport made a few lineup changes which paid off with Sharpe slotting home to take all three points. This win and a clean sheet were needed to boost morale going into the final three months of the season.

Frustratingly, March would begin much like February had, but it ended at the start of a run that would restore Palace’s form and send them surging back up the table to secure a record-breaking spot.

First Palace hosted a struggling Coventry United. The relegation battlers put in an excellent performance to grab a win through Katie Wilkinson.

Palace were back on the road and travelling to Lewes. Again, the opposition dominated, and Palace were punished to head home in defeat.

These back to back losses again posed Palace with a challenge to their mentality and confidence. With just four games left, further defeat could derail their previously successful campaign, so the south Londoners knew a reversal in fortune was desperately required.

That came in the month’s final match against rivals Charlton. The fixture saw Haines score one of the best goals of the season, with a remarkable strike from outside the box smashing into the corner of the net. She would later win the club-wide Goal of the Month award for this sensational effort.

Orman and Sharpe recall the outstanding finish as their favourite strike: “The way in which she scored the goal was brilliant,” says Sharpe. “The fact that we went on to win the game and got the clean sheet meant everything.”

Orman recalled it as “a thing of beauty.” She also praised her own personal performance, saying: “It was really great for me to make an impact late on in the game, making a save to keep the score 1-0.”

Here's your Palace Goal of the Month for March 🦅#CPFC

Winning the south London derby gave Palace the impetus they needed to end the campaign on a high. Final home games saw them host two struggling sides, Blackburn and Watford.

Rovers were up first. Throughout the season Palace enjoyed scoring early on, and Sharpe proved that yet again by finding the back of the net in the eighth-minute. Blackburn fought back and grabbed an equaliser only to see their hopes crushed when just five minutes later Haines found the corner, moving Palace into fourth place.

The final home game of the season saw a struggling Watford travel to Hayes Lane. Sharpe’s brace secured Palace victory, and other results meant Charlton and Sheffield United were unable to catch them in the league. Sitting in a promising fourth with one game to go Palace couldn’t drop lower than fifth, with the highest they could finish being second.

It was all the play for when travelling to Sheffield United on May 1st. Win could see Palace remarkably sit in the top two, but defeat would drop them a place to fifth.

This meant Palace guaranteed themselves a highest-ever league finish, but which place this would be was still to be determined.

The full-time whistle blew with the scores at 2-2, and Palace ended the season on 37 points and fourth in the league, behind third-place Bristol City on goal difference only.

With the season over, Sharpe earned herself top goal scorer with Haines picking up the most assists. After this record-breaking season Palace Women will be looking to once more move forward when 2022/23 begins.