It's hard to know where to begin with Chloe Morgan. Is it best to start with her impressive legal career, or her rapid rise in football? Alternatively, do you talk coaching, ambassadorial work or issues for LGBT and BAME communities in sport?

In the end, Morgan is asked to talk about it all as she squeezes cpfc.co.uk into her lunchbreak at work before an evening’s training.

For a full-time solicitor, it’s a nagging, time-consuming request, but thankfully Morgan is happy to oblige. She is, after all, used to a round-the-clock career.

Morgan joined Palace from Tottenham Hotspur recently after five years between the sticks for the Lilywhites, who she helped earn promotion to the top-tier for the first time in 2018/19.

In '19/20, her final season with Spurs, Morgan played on a professional contract in the Women’s Super League (WSL) and was a key member of their promotion squad the campaign before.

Recently, she appeared on the BBC, Sky Sports, Times and Telegraph’s websites discussing the issues closest to her. But, as a football-mad youngster with one eye on the law, she never envisaged such a career happening.

“When I started playing out at six- or seven-years-old,” she says, “I saw football as something that I absolutely loved, but I never really considered it to be a full-time career. I didn’t see much women’s football on TV, I never really thought the opportunity existed for me to play full-time and so I looked at other careers.

Very excited to be back with the @FAWC_ . Can’t wait for the season to start with the squad @cpfc_w 🧤⚽️🔥 #FAWC #womeninfootball #LetsDoThis https://t.co/ZEGciISL2Z

“I must have been 12-13-years-old [when first pursuing a legal career]. It came about actually by me watching a film called Erin Brockovich, with Julia Roberts. It’s to do with this woman in a David v Goliath situation where she goes on to take down this massive corporation for all these bad things they do. That kind of inspired me to get into law.”

Morgan went on to study law at Leeds University, and today works for Irwin Mitchell as a solicitor specialising in brain injury claims. For her 13-year-old self, she’s achieved her career ambition.

And for the six-year-old football fan, Morgan has gone much further than she could have dreamed.

“We [Spurs] went through promotion after promotion, working our way up the leagues and it just so happened that I was with the right club at the right time. Everything progressed, it became semi-professional and then eventually professional.

“I never in a million years expected I’d be part of a squad that’s playing at Tottenham Hotspur’s stadium and the Olympic stadium - Stamford Bridge as well - which was out of this world; I just feel so fortunate to have had those experiences.”

Arriving with matchday experience from some of the country’s most impressive and iconic stadiums means Morgan is the perfect fit for Palace and the club’s aspirations.

“I think this year Palace have big ambitions,” the ‘keeper proudly says. “In this year or the near future, we’re pushing for WSL… going forwards, the club has a lot of ambition to try and push up into elite, professional and full-time level. That’s definitely something I want to help the club achieve; I love that promotion drive and push to progress the club and make history.”

With Palace, Morgan joins a club with a proud development system in both the men and women’s game, with the Eagles’ production line unearthing fine prospects for both senior teams. This season, Crystal Palace’s reserve team won the National Reserves League Cup final by a resounding 5-0 scoreline, and have plenty of developing prospects on the fringes of the first-team in Mia Lockett, Beau Parker and Charlie Goad.

Morgan, who - amongst work, media commitments, training and playing - also coaches, is encouraged to see such a crop of aspiring youngsters at her new club. 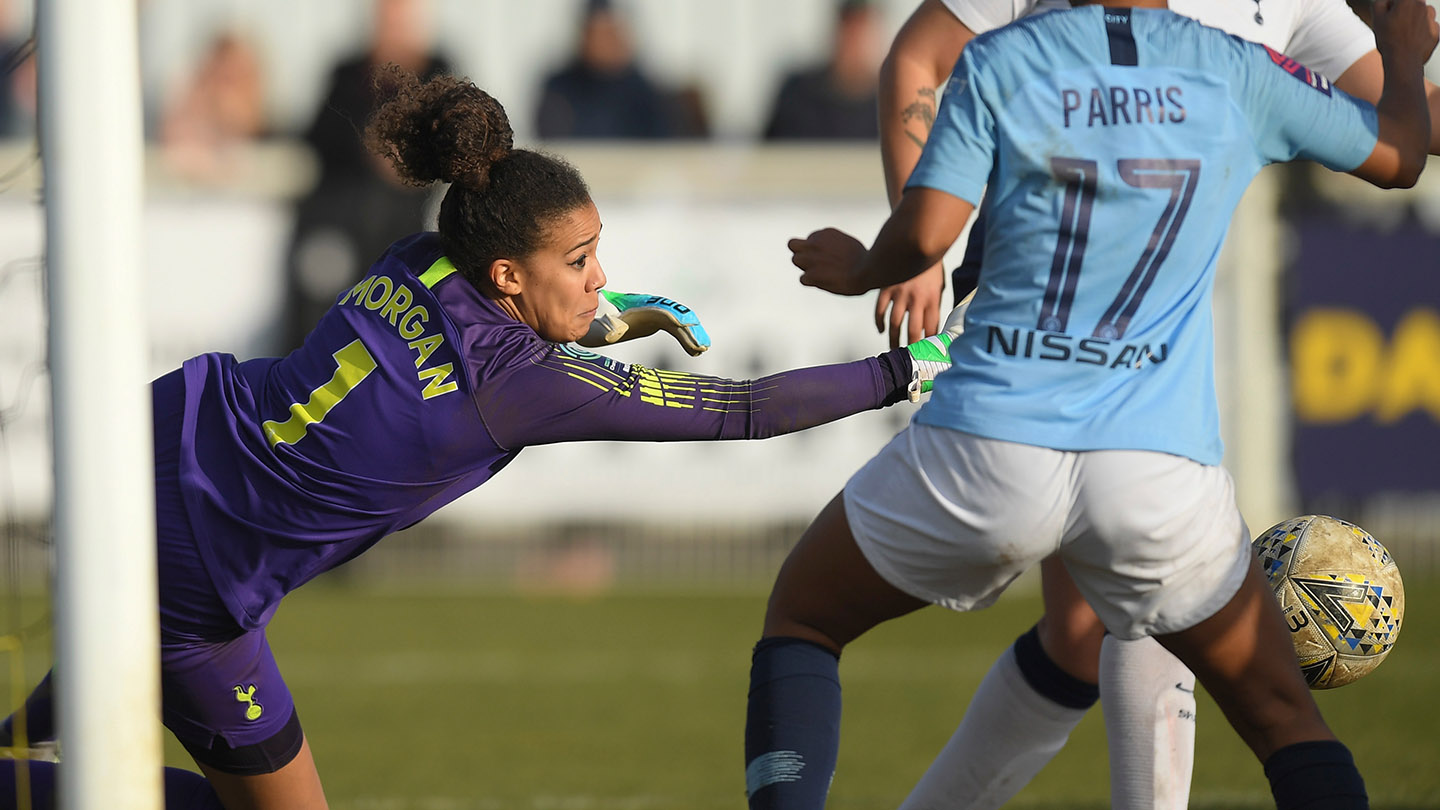 “I am seeing a lot of younger players at the Training Ground at the moment and I see how ambitious they are in wanting to push forward and get to that [professional] level. When I was growing up, not a lot of the girls I was training with necessarily thought it would be a full-time career for them.

“Now, I look around the Training Ground and it’s commonplace that players think: ‘You know what? I can make a career and make a go of being full-time.’ I want to help them get there.

“I get an absolute buzz out of going to coaching sessions and trying to help the next generation get better than we are and push forwards to progressing female goalkeeping… I think female goalkeepers and goalkeepers [in general] get stick for being in a position no one wants to play in.

“You only put the ‘bad kid’ who can’t play in goal. I want to get rid of that: the stigma around goalkeeping and make it a fun environment. That’s something I’ve absolutely loved.”

One group Morgan works with is KickOff@3, who, amongst other things, aim to encourage female footballers into the sport.

Recently, Morgan became an ambassador for the organisation alongside former Eagle, Réa Laudat. “I’m all for encouraging young girls to get involved in football,” she says.

But Morgan’s commendable work doesn’t stop there. She recently made headlines with her departure from Tottenham, as she today says “There were things that I was quite outspoken against at Spurs.”

I’m not really sure why calling for more diversity in football’s role models has provoked such a fiercely negative reaction. I think it’s important for the #nextgen to see themselves better reflected across the game and also in the media 👊🏽☺️ #equality #bekind #inthistogether https://t.co/csZzqIEbmK

Her passion for greater support and equality in the women’s game extends into both race and sexuality, too, with Morgan being a vocal supporter of BAME and LGBT rights in sport.

“From an LGBT perspective,” she says, “growing up I’ve been in clubs where the majority of teams sometimes have been LGBT and I’ve always felt there’s a sense of community there, an understanding that a lot of players are LGBTQ+.

“It’s quite a nice, safe space to be yourself in and not feel that it’s a risky thing to come out or tell your team ‘I was out with my girlfriend the other day.’… Obviously there are a number of openly out WSL and Championship players and they feel comfortable doing that, putting themselves out there because I think there is that understanding in the women’s game’s community.

“The landscape is completely different for male footballers. I think there maybe is a risk there - they don’t feel as safe or as comfortable being an openly gay player. There’s a risk of backlash from fans, backlash maybe from your own teammates.

“I don’t have any criticism for any male player who doesn’t feel comfortable [coming out]; your sexuality is your own personal property and if you don’t feel comfortable coming out, don’t. It’s got to be right for you. But I do think an openly gay player would have a big impact on the younger generation and it might even encourage players to come forwards with them.

“If a gay male player was to come out, the support of their teammates, first and foremost [is key]… If you’ve got your team behind you, saying they’re going to stand with you and support you, that would have to be a situation where the club was very supportive.

"Once it was made public the club [must] back up that player and make absolutely clear that they won’t tolerate abuse and that, if they did investigate any abuse, the supporters then found to be displaying that abuse would be banned from the game.

“There needs to be a zero-tolerance policy on that and I only think doing things or putting measures in place like that would encourage people to think twice before they say hurtful things.”

Distressingly, abuse in sport extends across multiple communities, with football recently recoiling at the racist vitriol directed towards Wilfried Zaha on his social media accounts.

As football in England supports the ‘black lives matter’ message across its operating leagues, Morgan is optimistic about the future of greater equality in the game, but says more must change at the top of the sport.

“Change starts from the top,” she states. “Addressing the lack of diversity in the boardrooms is the best way to address a lack of diversity elsewhere because decisions get filtered down. We must hear voices from the wider community, who can appreciate other people’s opinions and views and how major decisions might affect them.

“Individual clubs, generally speaking, are being quite proactive, which is fantastic. But still a lot of BAME kids growing up are not able to see themselves reflected in coaches and physios and coaching staff. That needs to be addressed.

“I think it’s great that so much attention is now being drawn to the issue. Now, steps need to be taken to continue driving change.”

With figures like Morgan in the sport, battling on a sporting and ambassadorial front, the game is moving in the right direction. Long may that continue.

READ NEXT: Meet the Palace Women confronting the COVID-19 pandemic