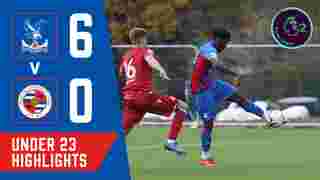 Match Action
05:27
9 Nov 2020
It was the U23s' first home game back at the academy and it was one to remember. A first half brace from Alfie Matthews gave the eagles a 2-0 lead going into half-time. The second half started very much the same with another brace being scored by Rob Street. Brandon Pierrick then produced a sensational volley to put the eagles 5-0 up. Scott Banks then converted a penalty late on as it finished 6-0.