If you are a parent with a child under the age of five, there is absolutely no question that you will have watched Hey Duggee. The primetime CBeebies favourite features a larger than life dog - Duggee - who cares for and entertains a bunch of animal children as they try new things before being rewarded with badges. Duggee and ‘The Squirrels’ (the five little animals) learn about every subject and life lesson you could possibly imagine, from cheese to tidying up, yoga to being careful; taking toddlers on a fun journey of discovery.

With three series and 156 seven-minute episodes under its belt, Hey Duggee racked up a mind-blowing 192 million requests on iPlayer in 2020, making it the BBC’s most viewed kids’ show of the year.

What those millions of parents and kids almost certainly will not know is that the creator of the multi-award-winning series is a Crystal Palace F.C. season ticket holder.

Step out of the studio and into the limelight, Grant Orchard.

Born and raised in West London, Grant moved to Crystal Palace 25 years ago and since graduating from Farnham Art College in 1995 has honed his craft as an animator over the last two decades, working on a range of commercial animation projects such as TV adverts and short-films at Studio AKA.

One of those projects, A Morning Stroll, tells the short story of a New Yorker's early morning encounter with a chicken - an event that plays out over 100 years and features an array of animation styles over the period. It resulted in Grant scooping a debut BAFTA award in 2012 (his proudest achievement), and it was also nominated for an Oscar. 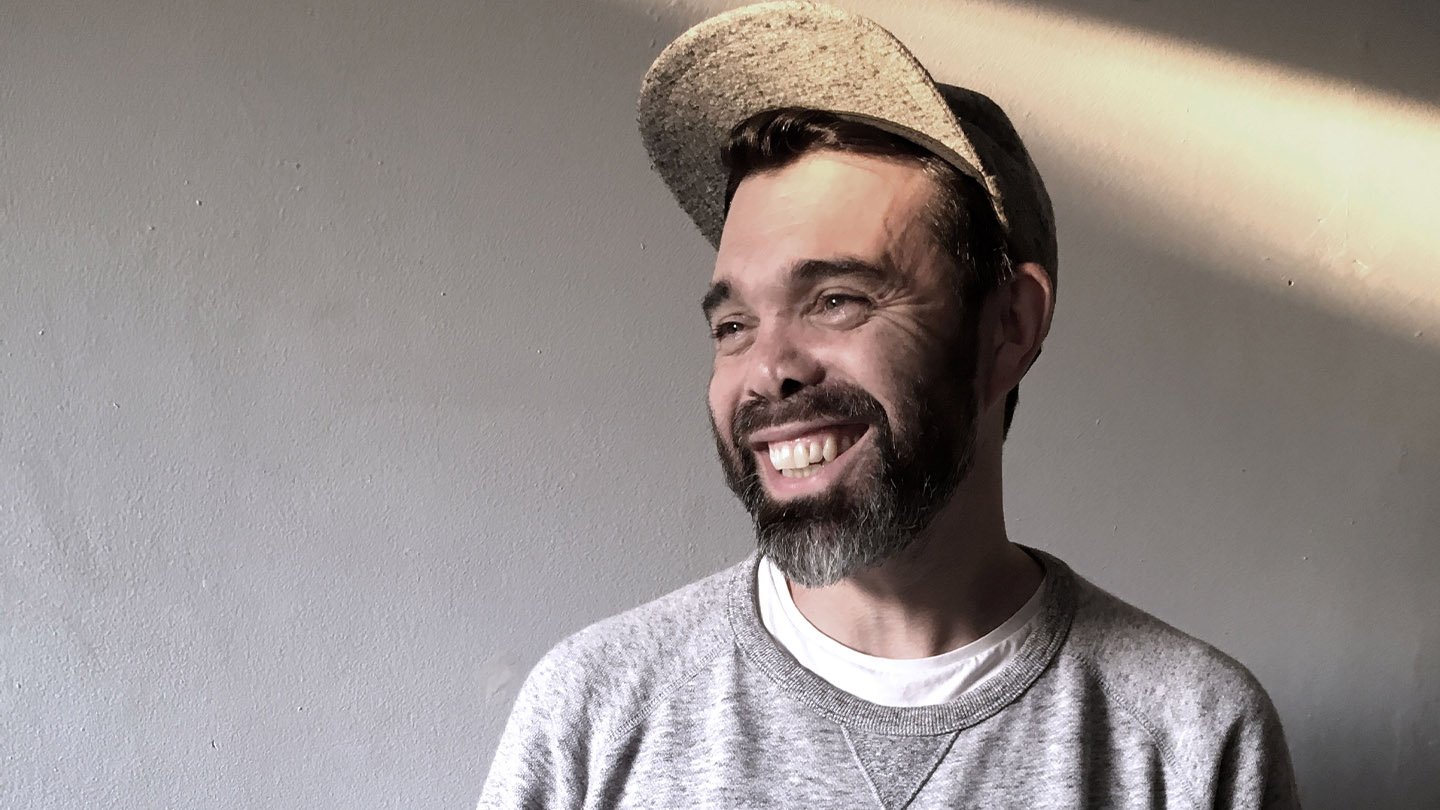 Since then, Duggee has been his focus. He explained: “I had no ambition to do a children’s TV series, but there was a point when commercials were drying up a little bit. There was a transition between TV commercials and what was happening online, and so a lot of agencies were a bit tentative about giving out work. Budgets were dropping as well, so the studio decided we were going to go into longer-format projects and they said ‘do you fancy coming up with an idea for a pre-school show?’

“I’d just had Sean [my first son] at that point. I didn’t really want to do it, because I thought it would be really hard to keep the quality up. The high turnaround with TV shows - you have to commit to at least to 50 episodes - often means you just have to drop the quality. But we came up with a way and design where I thought we could do it.

“So I decided to develop the idea, not thinking it would really get anywhere. But it got picked up really quickly by the BBC – and then we were just in it, and within 18 months to 2 years, we had the first series done.”

So how did Duggee as we now know it come to life? “You know, when you’re watching a kids’ show as an adult – you’re really relieved if it’s palatable. You grasp onto it and are desperately grateful if it’s enjoyable for them too, and you end up loving it. The shows for me and Sean were Pocoyo and Little Red Tractor, which he loved and because he loved it, I did too. So I thought if we’re going to make a show – we have to make a show that’s for the parents as well – it felt like a no brainer.

“I wanted to come up with the most cliched framework for a show, but from within it - we could go anywhere. So in the pitch we referenced The Mighty Boosh, The Muppets, Yo Gabba Gabba, even The League of Gentlemen. I felt that if we did it in a palatable, comforting and familiar framework of ‘five animal kids being taken care of by a very friendly large dog’, we could get away with a lot of stuff within that.”

Having that clear vision of creating a pre-school show as much for the parents as the kids was such a driving force, something he was inspired by growing up.  Grant explains: “The Muppets was the best – it wasn’t designed exclusively as a kids’ show, it was a family show. The Flintstones, like The Simpsons too, was also designed for adults. Scooby Doo is a perennial, that is genius in terms of being introduced to a thriller and a mystery at an early age, you don’t get any better than the old ones.”

Watching Duggee really is a joyful experience with its striking colours and charming narrative enthusiastically delivered by Alexander Armstrong (Pointless). It has a light and loose educational touch, but it’s more about the journey of the animal children (referred to as ‘The Squirrels’ despite being a little hippo, octopus, mouse, crocodile and rhino) finding out about something. Allow us to explain as best we can. 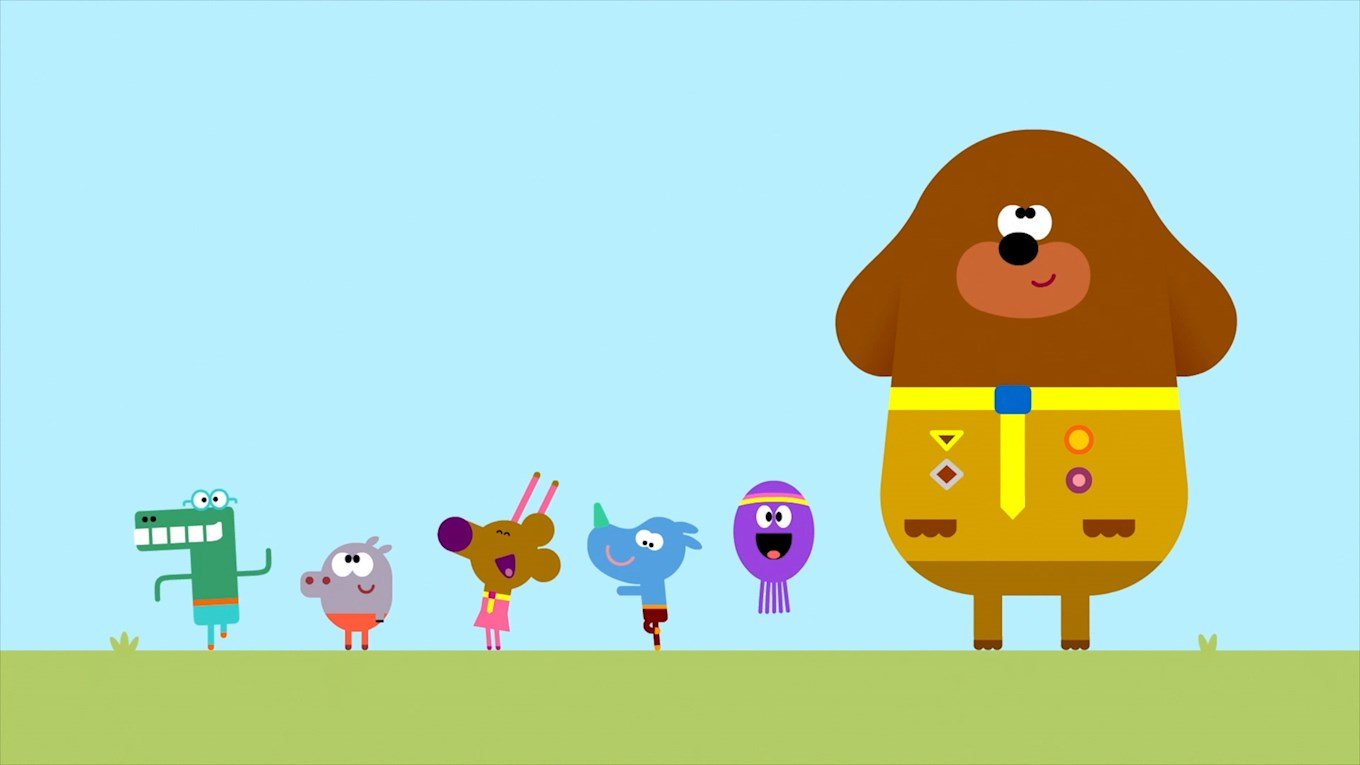 ‘The Tadpole Badge’ for example is loosely about growing up. Duggee builds a rockpool, and the animal children ask why it’s got ‘wriggly raisins in it’. Duggee explains that they are tadpoles, and babies too. Several questions ensue (parents, nod here): ‘Are they baby worms?’ No. ‘Baby snails?’ No. They are eventually informed the tadpoles are in fact baby frogs. ‘Frogs? They don’t look – or sound - like frogs. Are you sure, Duggee?’ they ask. The squirrels are then taught about how tadpoles grow up (arms and legs appear first, then they turn green and spotty) with the tadpoles themselves then being informed of their soon-to-be-frog-like status and, reasonably, are baffled. The tadpoles then quiz the squirrels as they grow-up before their eyes, reluctantly entering the moody teenager phase (complete with huffs, puffs and ‘it’s not fair’s’), and eventually leaving the pond / home (as fully-fledged frogs) and proudly proclaiming their various career choices to the squirrels (one is off to study, another goes on a ‘gap yah’, the third goes off to work in the city, suitcase and all). The little squirrels look on as doting parents, “don’t they grow up fast?”. The squirrels are then given their ‘Tadpole Badge’.

Are you still with us? Do yourself a favour, just watch it [shortened version below].

The sheer breadth of story-telling is extremely, almost unfathomably, broad. Grant says: “You might come up with an idea – and think this is brilliant. But you get it down on paper, and apart from the idea itself – it’s got nowhere to go. A lot of the episodes, like ‘The Sewing Badge’ isn’t really about sewing, it’s about an adventure to get to someone who’s wearing a poncho! They can be quite oblique.”

Grant explains the creative and production process: “From beginning to end, it’s at least a year for each episode. We’re working on between 40 to 52 shows at any one time – in various stages of production: 10-12 in script stage, 10-12 being stroryboarded, 10-12 in animation stage, then 10-12 in sound and post-production. It’s crazy, it’s the worst way of organising it. Because the demand is so high, we’ve never had a gap between series to restructure the process really well – but they won’t let us stop, because people want the episodes!”

As the show’s creator, Grant plugs into every stage of the process. “In American terms, I’d be called a showrunner. I’m an animator really, but I don’t get time to animate these days – I am very heavily involved in the script stage (we have about 10 script writers), I’ll be across that. We have one person on the storyboards and animatics, and then we’ve only got about nine people animating. Then there’s four people in production. I’ll be across it all, directing too [with Sander Jones].

“We’re quite a small studio based in London – it’s not a big production, it’s quite small scale comparatively. And because it’s a small team, everyone has an input – but I definitely have to steer it. It’s a bit like a football club, there’s a culture that you want to preserve – and I think if people come along and do things differently, that ingredient can quickly make it go out of whack. My only worry is keeping things fresh.” 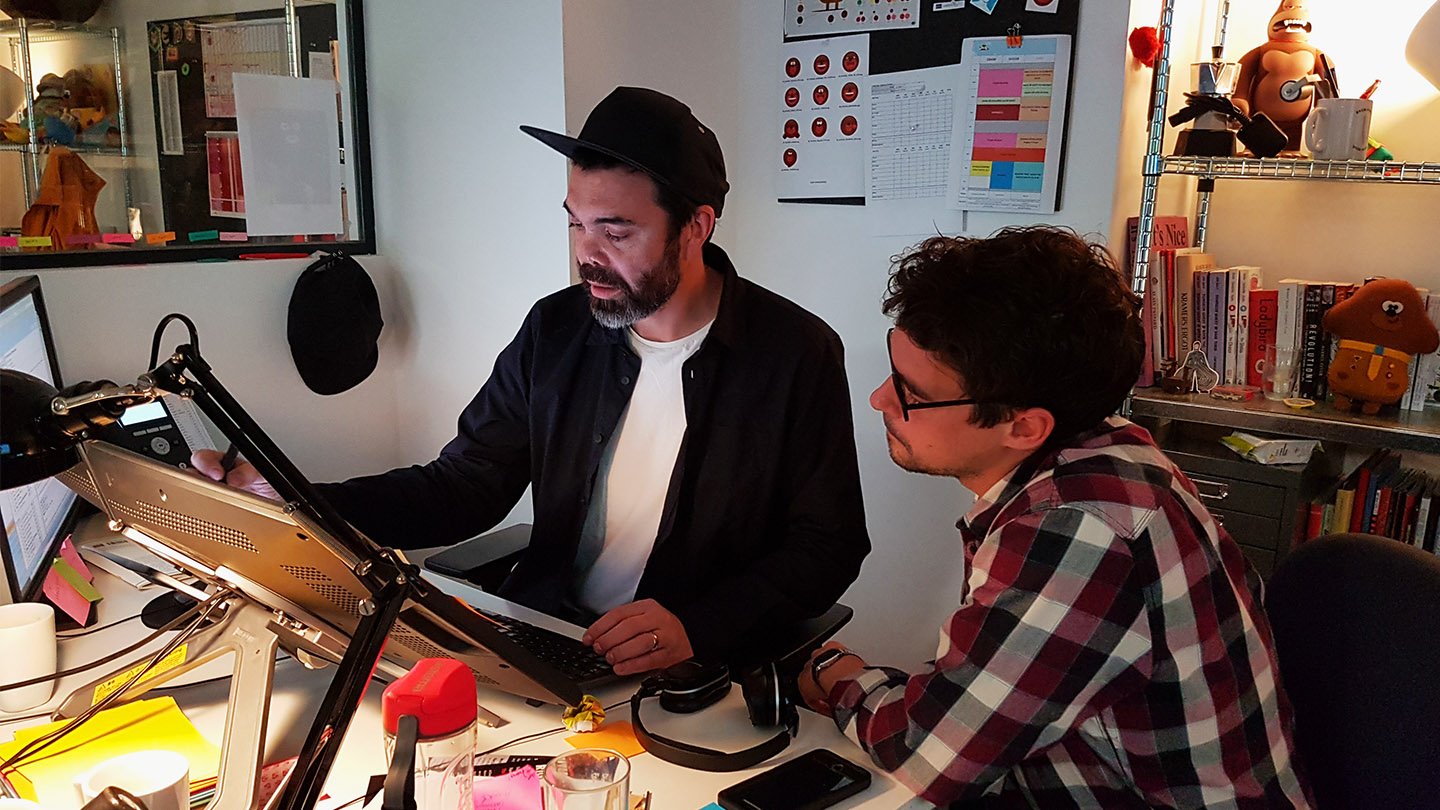 Onto football, then. Grant is a keen footballer, and played Sunday League football for Green Park Rangers for the best part of 15 years in the Thames League.  The team, which began as a group of animators, surely must be the most decorated Sunday League team ever, with Grant playing alongside Asif Kapadia (director of Amy, Senna, Maradona) and John Maclean (writer and director of Pitch Black Heist and Slow West).  The three team-mates would go on to celebrate as BAFTA winners on the same night in 2012.

A less humble team would have such accolades embroidered on their playing shirts, but Grant says: “To broadcast that too much would be terribly smug – you have to temper it a little bit, even though we were really chuffed.  It was a typical Sunday league team – we had a real mixed bag of players. We had a few fine artists in the team, but also Italian plumbers… that’s what I love about football though, it was a real mixed bag.”

As for Palace, Grant says: “Growing up, my family were almost anti-football – my dad was a police officer who encountered a lot of stuff working on football matches in the 70s & 80s, and he always put me off football, said it wasn’t a game to support – he didn’t like it at all. There was no-one to say ‘you should support this team’ so I always flirted around teams when I was growing up, but with Palace - it’s the only team I’ve properly supported, and it’s been a joint fandom between me and my boys.

"We started going to the family days to see some Championship games about 11 years ago – it was a fiver for adults and free for kids, that’s when my eldest Sean [favourite player: Ebere Eze] got massively into it – we’ve been going home and away ever since.”

So with his love of the Eagles now public knowledge, it would be remiss of us not to ask whether Duggee was inspired by club legend Dougie Freedman, especially as Grant started as a season ticket holder in 2011 when Freedman was at the helm. Grant mused: “Maybe subconsciously… It would be a great headline for you, but I don’t think it was.  It was originally going to be called Chop Chop, then Doogo, and then Duggee came up. You could say ‘I think it could be possible, on a subconscious level…!’”

We go again. The little rhino is called Tag, which is also the name of club Chairman Steve Parish’s former advertising business, which sponsored the back of the shirts the year that Grant began going to Selhurst. “Now that is a hard one to argue. It could well be that I unconsciously adopted both names while at Palace. It’s a strong case.”

Now on a roll, cpfc.co.uk asks (begs) Grant to crowbar a Palace reference into a future episode, akin to a Palace supporting film-maker subtly placing a Palace branded mug in a random scene. “I could do that. Maybe a wise old character called Roy…! Maybe he could be an eagle. We’ve never had an eagle yet. Do you know what? Hold on. I’m just going through an early stage script for ‘The Mountain Badge’ in Series 4, and there is an eagle. I could call him Roy. Or Steve. Leave it with me.” 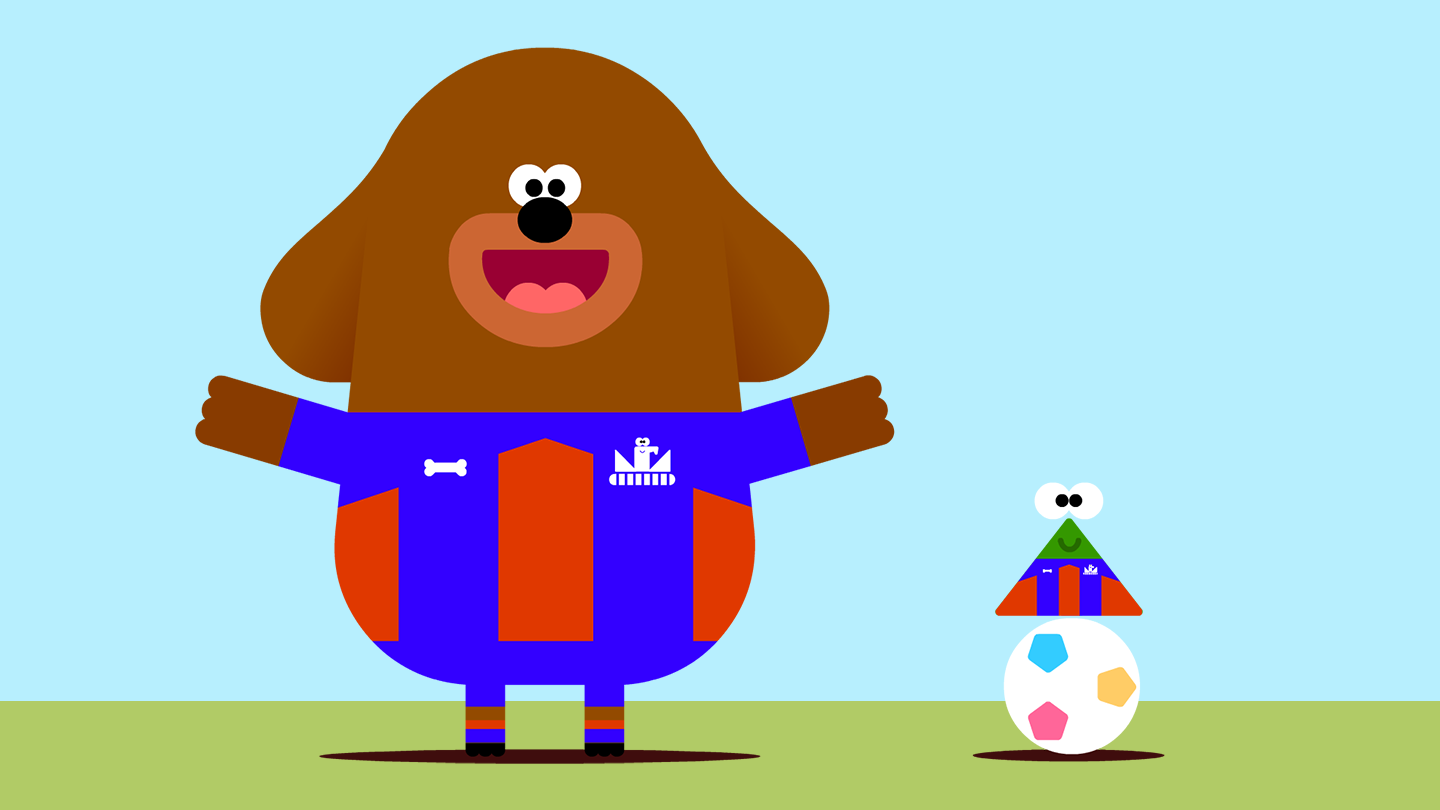 Hey Duggee airs weekdays at 7:15am on CBeebies and is available on BBC iPlayer