Crystal Palace have become just the 19th team in Premier League history to achieve the landmark tally of 500 points – check out the breakdown below.

Crystal Palace have faced 43 of the 49 teams to play in the Premier League, but who are the Eagles’ favourite opponents?

Palace have taken more points off Leicester City than anyone else. Since their first victory in October 1994 at Filbert Street, inspired by a side including Chris Coleman, Gareth Southgate and John Salako, the Eagles have won 27 points against the Foxes. 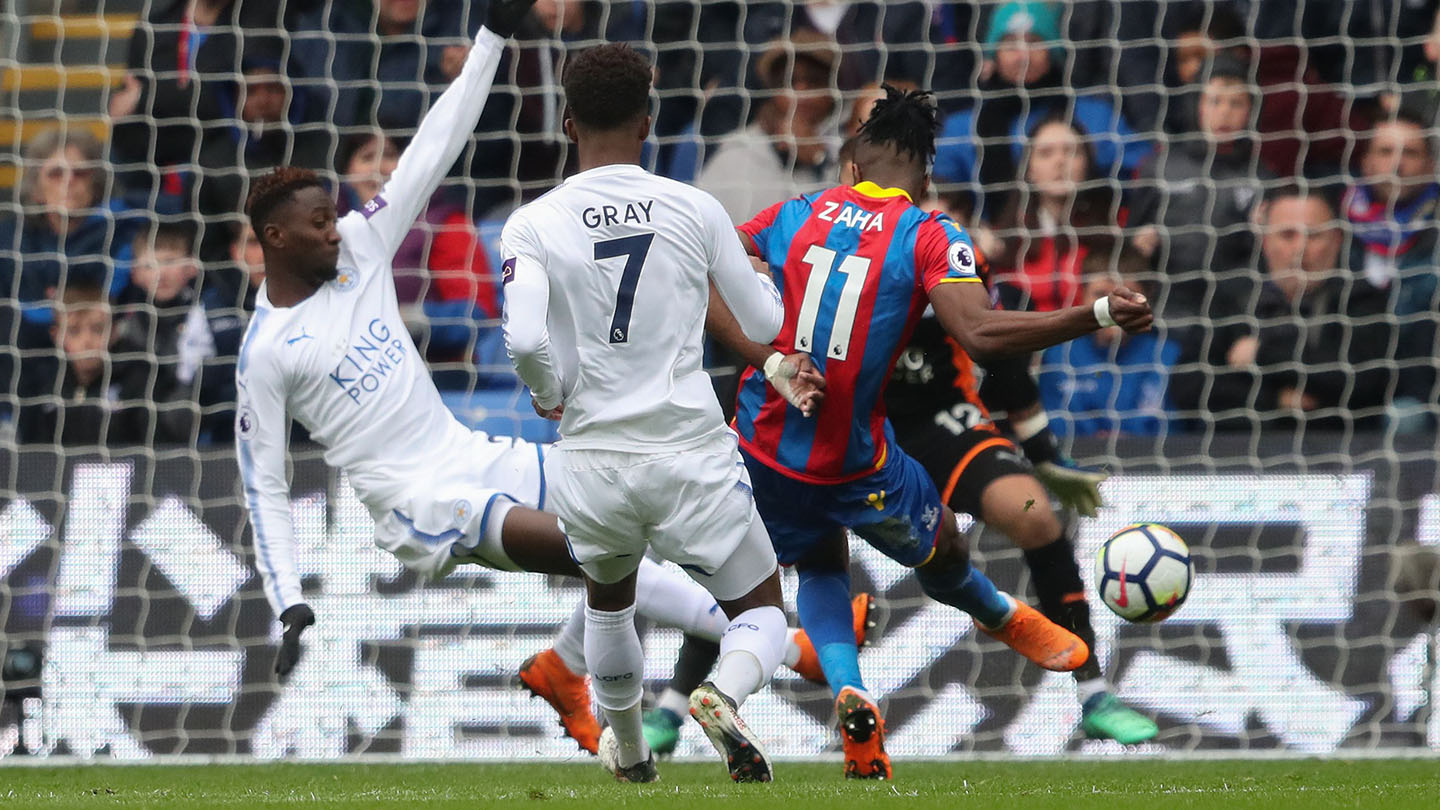 Unsurprisingly, Leicester are also the side Palace have beaten the most. With eight wins – including four in a row between 2017 and 2019 – there is no side against whom Palace have been more successful.

Second only to Leicester is Palace’s record against Stoke City. In their 10 Premier League meetings, the Eagles have been on the winning side seven times, a 70% win percentage that is higher than any other opponent they have faced five times or more. Coming in a close second is Middlesbrough, who Palace have beaten in four of their six meetings.

When it comes to goalscoring, there is another favourite target. This season’s 5-1 win at the Hawthorns was the latest in a series of victories against West Bromwich Albion, and against no side have Palace scored as many goals-per-game as they have against the Baggies.

A brace each from Wilfried Zaha and Christian Benteke helped ensure an unwanted record for the Midlands side, taking their tally of goals conceded to 23 in 13 games against the Eagles; Fulham’s 12 conceded in seven games comes a close second.

Palace’s biggest win in the Premier League win was against – you guessed it – Leicester City. In April 2018, five different goalscorers struck in a special afternoon at Selhurst Park, as the visitors, whose side included Jamie Vardy, Riyad Mahrez and Harry Maguire, were well beaten.

However the highest-scoring win came in a barnstorming game against Bournemouth in 2019. Once again, Selhurst Park was treated to five Palace goals, including a brace from Michy Batshuayi, but the visitors got three in return, in an eight-goal thriller that gave Roy Hodgson the 100th Premier League win of his career.

You have to go back much further to find Palace’s record attendance in the Premier League era, when 30,115 fans poured into Selhurst Park to see the Eagles take on soon-to-be champions Manchester United.

Steve Coppell’s men held out for an hour before goals from Mark Hughes and Paul Ince secured United the points.

For Palace, one man’s performances has been securing the points year after year. Wilfried Zaha has won more Premier League points than any other player, on the pitch for 274 points in his Palace career, 55% of the all-time total. 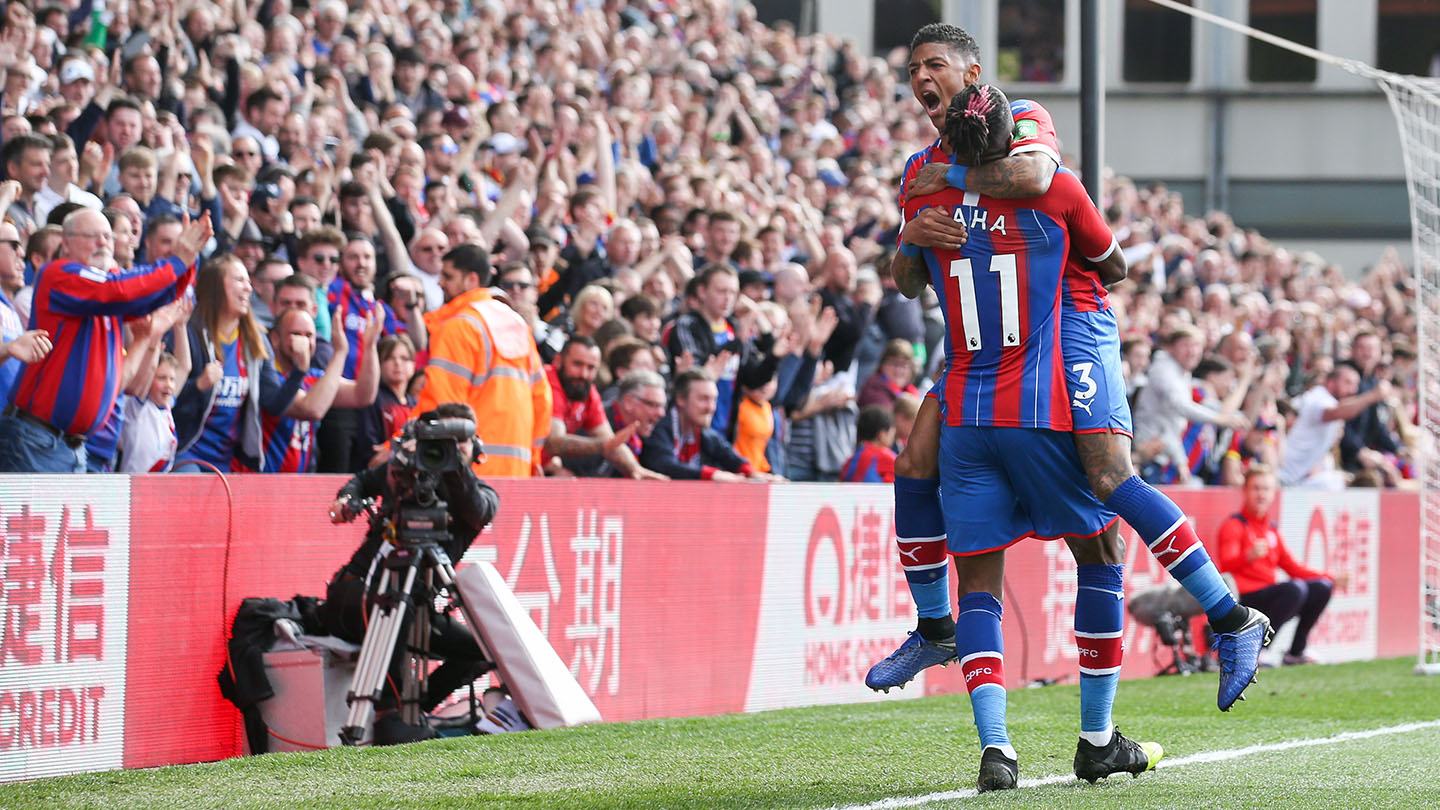 In that time he’s scored 45 goals and registered a further 40 assists, racking up 219 Premier League appearances, more than any other player in red and blue.

Palace’s greatest successes away from home have come on Merseyside, winning at Goodison Park more than any other away ground – although they have more away wins at Leicester City, these are split between Filbert Street and the King Power Stadium. 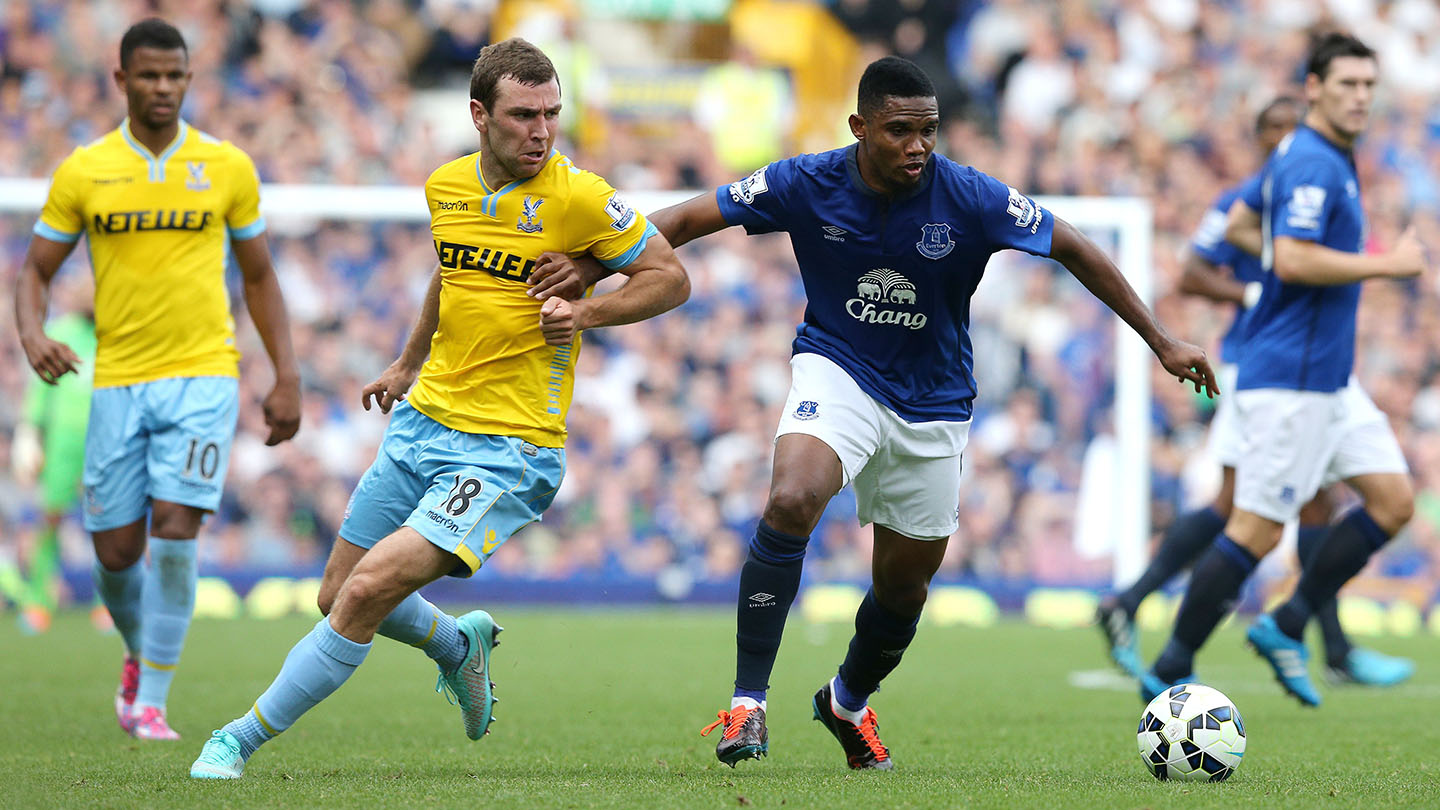 With 15 goals scored and 14 points gained, Goodison is a favourite location for the Eagles, hosting some memorable encounters between the two sides.

Perhaps the outstanding performance came in September 2014, when Palace came up against an in-form Everton side spearheaded by Romelu Lukaku and Samuel Eto’o – supported by future Eagle James McCarthy in midfield.

After Lukaku had opened the scoring within just nine minutes, Palace pulled a goal back through a Mile Jedinak penalty to go in level at half-time.

In the second-half they came out determined to add to their tally, and goals from Frazier Campbell and Yannick Bolasie built a commanding lead that even a late Leighton Baines penalty couldn’t help to overcome.

With a win percentage of 50%, Turf Moor is Palace’s most consistent away trip.

READ NEXT: Kit or Miss: Reviewing Palace's standout shirt from 97/98