Jean-Philippe Matata spoke with Palace TV to explain his goal against Wolverhampton Wanderers, saying of the opener: “It’s nice to kick some more corner flags.”

Mateta scored Palace’s first in a 2-0 win by striking at José Sá in goal and then reacting fastest to the loose ball just yards out, prodding home from close-range.

He looked back on the effort, saying: “I saw Wilf [Zaha, who got the assist] go with the ball and saw the last time he tried to cross. I came in front of the defender, shot and the ‘keeper kept the ball. But after we leave the ball and I follow [on the] rebound. 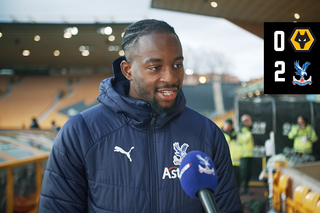 “I follow and trust the ‘keeper’s mistake. I followed it and scored.

“I hope it’s a goal because [with] the VAR it is sometimes a goal, sometimes no goal, so I’m waiting like the team. It’s a goal, I scored and the VAR confirmed it.”

Looking at the game more widely, Mateta then discussed the team’s broader attributes, commenting on their ability to press from the front and defend confidently at the back.

He said: “The gaffer wants to press high, to retrieve the ball high and [that’s what] we tried to do today. I enjoy it because I pressed good and I scored also, and we won.

“It’s very nice to not concede a goal and I hope we will continue like this.