Jordan Ayew says his fine finish against Arsenal may have proved people wrong, as he thanked the fans for their support at Selhurst Park.

“It’s a lovely pass [from Joachim Andersen],” he told Palace TV+. “Obviously it’s on my left foot – people give me stick about my left foot, but today I think I showed them that I have a good left foot.

“I just slotted it in. I’m very happy, and I hope it’s not the last goal I score. I hope there is more to come in the next few games.

“I’m pleased. As soon as I came back from AFCON, I didn’t really have game time, and today I had my opportunity so I'm happy to have taken it and happy to score as well.

“It has not been easy but we keep on pushing and working, and we’re happy it paid off.” 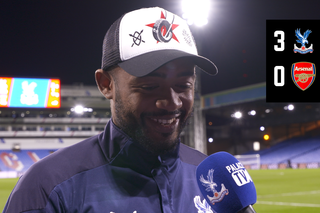 Ayew was thrilled with the atmosphere in south London, as the fans gave him a rapturous reception following his substitution late on.

“It’s amazing,” he said. “I told the guys: I’ve never played against Arsenal and won 3-0 before. It’s amazing. This season has been really, really good. We’ve enjoyed it and hopefully we will build on it for next year.

“As players, we always want to do positive things. We have positive things coming ahead, like the semi-final of the FA Cup. Everyone wants to participate, and we’ll do our best to help the club achieve it’s goals.

“[The standing ovation] was nice. I was surprised, but obviously they have always been good to me, the fans, and I need to thank them as well.

“Things have not been easy. We keep on going, keep on fighting, and keep on working hard. Days like today we want often.