Patrick Vieira says the young Academy players who have trained with the first-team could have an opportunity to feature before the end of the season, but reiterated that his primary focus is on carrying positive results into next season.

“But I always have to put a strong team out to win football matches. Yes, I will give some opportunities to some young players, but they will have to be surrounded by some players that will allow them to perform.” 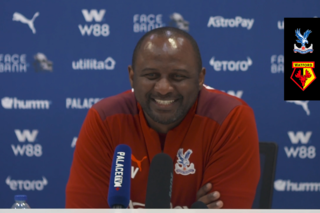 The performances of his young signings, as well as Academy graduates like Tyrick Mitchell, has been a particular source of positivity for Vieira this season.

“We never talk about position at the beginning of the season,” he said of the Premier League table. “We knew that we had a couple of challenges with young players coming through. I’m not going to lie to you: I’m satisfied and really happy with where we are in the table, but I’m more satisfied about the performance that we had.

“[I’m] satisfied as well with how those young players perform this season. Of course it’s not finished yet, and we want to finish the league well.

“There’s a lot more to come from those groups of players and the team. We have to keep treating those games the same way, keep challenging ourselves to improve and use the season as a strong foundation to keep progressing individually and collectively.

Vieira paid tribute to former-Palace manager Roy Hodgson, who returns to Selhurst Park with his Watford side this weekend.

“I don’t have any doubt about the way that our fans will welcome him back,” he said. “He’s someone who gave a lot for this football club… and it will be nice to see him back.

“I believe the last four years he spent at this football club, he built the foundation that allows me to work with these players today.

“He built the kind of stability that you need to be a Premier League team. He always managed to keep the team in the Premier League when it was really a challenge. He did a fantastic job.

“I came on with those players who had a really good experience of the Premier League, and that allowed me and the football club to bring the young players and find the right balance to maximise that potential.

“When you have a strong foundation, it allows you to do well.”

Vieira revealed potential future plans for Wilfried Zaha, who has filled in as a central striker on occasion this season.

“I have to convince him and that will take time, but that is a position that I believe he can play,” Vieira explained. “He’s really strong at holding the ball, he is capable of linking the game and he can drop in the midfield.

“I believe this is a position that he can excel in for us. We’ve had a couple of conversations about that. He doesn’t say no, but it takes him time to buy into it.