Zaha: We have the quality to impose ourselves on the best teams

Wilfried Zaha says Crystal Palace now have the quality to stop ‘looking at the shirt badges’ and start imposing themselves on some of the league’s best sides, after an imposing victory against Arsenal at Selhurst Park.

“We worked on what we were going to do all week,” he told Sky Sports after the game. “We knew they would look to play inside, so we just tried to block the inside balls. When we had the chances we just countered, and we got the goals we needed.

“I think the quality we have, we’ve just got to impose ourselves in the games we play. It’s not about looking at the shirt badges, we’ve got quality in our team.

“If we play the way we want to play, we can hurt anyone.” 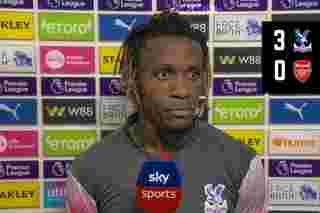 With an FA Cup semi-final against Chelsea still to come, Zaha says the dominant Arsenal victory can give the side momentum – as can the Palace fans.

“It’s massive because it just shows the resilience the team has,” he said. “Obviously in the past, we would score a goal and scramble. Now it shows that we can defend together, and we can attack together.

“It’s a massive confidence boost. But it’s a thing where we’re taking every game as it comes. Obviously [the semi-final] is a big game, but we’re just trying to win every game we can right now.

“I always say: I feel like Palace are the best fans. They add a lot to our games – when we’re under the cosh, hearing them cheering us on is literally like a 12th man. Credit to them.

“It shows that we don’t need to look over our shoulder. We can look up the table and try to move further on.”