Crystal Palace Under-18s ended the season on a high as Victor Akinwale secured his status as the league's top scorer with victory over Fulham – keep up to date with all the goings on from the club's young sides with our latest Academy round-up.

Ending on a high

Rob Quinn’s Under-18s finished another impressive season on a positive note as they beat Fulham 1-0 at the Academy ground.

Akinwale scored the only goal – his 27th of the season in all competitions – to see Palace end the season in third place, five points clear of Arsenal in fourth.

Palace were once again one of the top sides at Category 1 level after finishing in second place last season, and will go into the next campaign hoping to go one better and lift the Under-18s Premier League title. 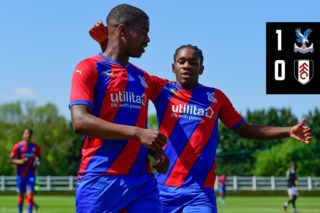 Akinwale’s goal against Fulham confirmed his record as the top scorer in the U18s Premier League South, with 24 league goals – six more than his closest competitors.

That means he joins Jesurun Rak-Sakyi as his league's top scorer, with Rak-Sakyi leading the Premier League 2 on 18 goals, joint-top with Manchester City's James McAtee.

“I wanted to be top scorer in my league,” Akinwale told cpfc.co.uk in an end of season interview. “It feels good. I feel like in pre-season I worked really hard, so I'm happy to get top scorer.

“Last year I didn’t score as many – David [Omilabu] stole the spotlight! I was watching him and seeing what he does, using him as motivation.

“He told me to beat his record of 21 goals. I used it as motivation to score as many goals as I can and surpass his target. He wasn’t really happy about it!”

You can read the full interview with Akinwale via the club's website and app on Thursday (19th May).

From Ederson to Schmeichel

Despite only turning 18 this season, Joe Whitworth has spent the vast majority of the campaign at Under-23s level. He made light work of the step up, saving four penalties in his first two months and representing England at Under-18s level.

He played as a forward until the age of 12, and that ability on the ball has affected his game today – as he told the Palace matchday programme.

“There are loads of goalies I have similarities with,” he says. “My distribution, I look to Ederson a lot to improve that.

“Because of my height – I'm not the tallest goalie – I look at goalies like David Raya or Kasper Schmeichel, who are not six foot four, or five, but are still playing at the top of their game in the Premier League.”

Ronaldinho out, Tyrick Mitchell in

Scott Banks has caught the attention of Palace fans throughout the season with his own personal highlight reel of stunning goals – several in the form of what are fast becoming known as 'typical' Scott Banks free-kicks.

Despite idolising Brazilian superstars Ronaldinho and Neymar as a child, the Scottish forward revealed recently that he now finds inspiration closer to home.

“Tyrick Mitchell is a great one that has made that step,” he explained. “For him being in the first-team, it’s not so much his positioning [that I admire] but how he managed to take that step, playing so well week in, week out at such a young age in the Premier League.

“It’s such a good example of what’s next. It’s not my position but it’s the mentality he has and the high performance every week.

“It’s something I hope I can replicate.”

Jesurun Rak-Sakyi and Tayo Adaramola, who both made their professional debuts this season, may be in for a further taste of Premier League action in the final two games.

“We have Jes and Tayo training with us,” Patrick Vieira said in his pre-Aston Villa press-conference. “They will be around the first-team for these three [remaining] games and some of the games they will be on the field.

“We need to give them and create these types of opportunities to see how they will react under pressure.”

With Rak-Sakyi on the bench against Aston Villa and Adaramola travelling with the side, there certainly seem like opportunities for Premier League minutes against Everton and Manchester United to come, should the matches allow them.