Academy round-up: starring performances, settling in and what to watch

Crystal Palace’s young sides return to action this week with two huge clashes at both Under-18s and Under-23s level. Find out more and keep track of all the latest goings on at the club’s Academy with our weekly round-up below.

There is no more shining example of Palace’s Academy youngsters thriving in the Premier League than Tyrick Mitchell.

After two goal-saving interventions at Carrow Road to prevent Teemu Pukki doubling Norwich’s lead, Mitchell stepped up once again to star in the Eagles’ draw with Brentford, keeping a clean sheet.

The performances saw him scoop back-to-back Man of the Match awards for the club.

Palace’s clash with Hartlepool saw the arrival of a famous fan to Selhurst Park; a household name for anyone with even a passing interest in the game.

Not shy of supporting his beloved Poolies on the air while presenting Soccer Saturday, Jeff Stelling was in attendance for their FA Cup trip to south London as Michael Olise and Marc Guéhi scored the decisive goals.

Speaking in the Palace matchday programme, he praised the club’s focus on bringing through young players.

“The foundations are being laid for the future,” Stelling said. “You might not have got more points this season than last season, for example, but the foundations are there for everyone to see for what could be a really exciting future.”

After joining the club in January from Drogheda United, Killian Phillips has been settling in to life in the Academy.

“I’m 19-years-of-age and I have loads to learn in the game,” he said. “I want to have a good career. This is the best place for me to develop.

“[The facilities] are a joke. Compared to Ireland it’s on a whole different planet. It’s the best place we can develop and you won’t find better training grounds than this.” 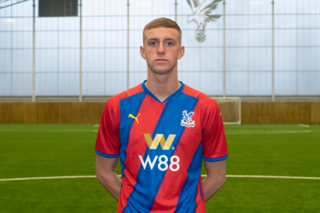 Philips hopes that with hard work in the youth team he can get his chance with the senior side.

“Jes [Rak-Sakyi] did well and you’ve seen Patrick Vieira give him a chance,” he explained. “I’m sure if you’re doing well, you’ll get a chance in the first-team.”

Two huge clashes await the young sides this week as they return to action following a fixture-free weekend.

Paddy McCarthy’s Under-23s welcome Manchester United to south London, hoping to complete a league double after an impressive 2-1 victory in the north west before the turn of the year.

Palace sit level on points with the Red Devils as they enter the business end of the season, with the two sides separated on goal difference alone.

You can see how the Young Eagles get on by tuning in to Palace TV+, which will be showing the game LIVE.

For the Under-18s, there is a chance to conquer another north London opponent after seeing off Spurs last time out. This time, Arsenal make the trip to the Academy as Rob Quinn’s charges look to keep the pressure on the sides at the top of the table.