Inside the Palace v Brighton rivalry at Academy level

Even at Academy level, there is no better feeling for a Palace player than beating Brighton & Hove Albion – especially on their own patch.

The new Palace TV+ documentary Coming of Age: The Step Up demonstrates how the passion of the club’s fans runs right through the young players, with boyhood Palace supporters proud to pull on the shirt in the most important game of the season.

“Rocking down to Brighton with our heads held high and our chests puffed out, knowing that we’re going to be on the front foot and take the game to them as well.”

“Go again, let’s go get these,” he tells him. “You know what it means to Palace fans next week, don’t you?”

“Biggest game of the season,” comes the reply.

“Paddy and [Darren] Powell made sure we knew how much of a big game this was, and me and Jack made sure all the lads knew we had to win this game. We couldn’t lose.” 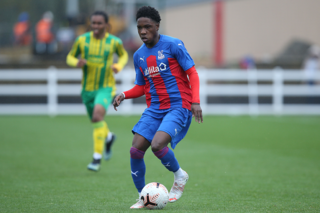 Wells-Morrison has a similar perspective.

“As a Palace fan, you can’t lose one of those games.”

In the dressing room at Brighton, Paddy McCarthy called on the two die-hard Eagles in his side to press the message home.

“Jacko, what does it mean to Crystal Palace fans coming to Brighton?” he asked.

“Everything,” Wells-Morrison responds. “I know that every Crystal Palace fan will be watching this game and wanting us to win. I just want to beat them.”

McCarthy wheels around. “Joe, as a Palace fan what does it mean?”

“It’s everything – we have to win it,” Whitworth replies passionately. “We can’t lose it. We’ve got to win it.”

As the team stand up to head out to the pitch, McCarthy delivers one final instruction.

“These are the games,” he shouts. “We leave everything out there to go and win it.”

Their passion worked. Palace scored first, and restored their lead before half-time after Brighton’s equaliser. Then, in the second-half, they let loose.

Kaden Rodney’s 25-yard strike was the pick of the bunch, but Jack Wells-Morrison celebrated wildly after adding two of his own. The Eagles ran out 5-1 victors.

To watch Coming of Age: The Step Up in full via Palace TV+, click HERE.