Conor Gallagher has been named Crystal Palace Player of the Season for 2021/22 by supporters.

Gallagher has played an instrumental part in the latest campaign, making 36 appearances and scoring eight times across all competitions. In doing so, he won the club’s Player of the Month award twice, Goal of the Month once and scooped Young Player of the Year at the 2022 London Football Awards.

Away from Palace, the midfielder earned his first senior England call-up in November 2021, making his debut in a 10-0 win over San Marino and adding a further two caps in 2022. 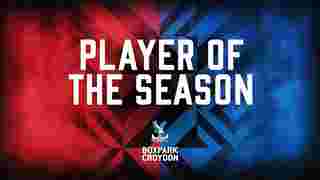 He scored crucial goals against Brighton & Hove Albion, Manchester City and Wolverhampton Wanderers, some sublime efforts against Watford and Everton, and even bagged a brace to secure a point when facing West Ham United.

His central role in Patrick Vieira’s team meant a third of supporters voted him as Player of the Season, becoming the 38th Palace man to earn the accolade since 1972.

In second, Marc Guéhi earned 24% of the vote and Tyrick Mitchell collected 16.4% in third. Earlier in the club’s End of Season Awards, Mitchell was named Young Player of the Season.

Manager Vieira presented Gallagher with his trophy at the club's End of Season Awards night at Boxpark Croydon.

Speaking with the award in his hands, Gallagher told the crowd: “Its massive. Honestly, from the bottom of my heart I can’t thank the fans enough. You’ve been brilliant from the first day and I've loved every minute of playing for Crystal Palace.

“I want to thank the players and the staff as well, because they’ve been unreal. I really appreciate it, so thank you so much.

“There have been a few highlights, it’s hard to pick one. But Manchester City, that win there and scoring was an amazing feeling.”