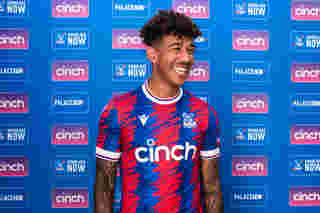 The United States international joins from Bundesliga giants Bayern Munich, with whom he made his senior debut aged 18.

Born in Alabama, USA, Richards began his career near Houston before joining F.C. Dallas’ Academy and earning a professional contract there.

He signed for Bayern Munich on loan in 2018. From here Richards’ rise was swift: he made his senior debut in a friendly against Paris Saint-Germain in 2018, his professional debut with Bayern Munich II in 2019, and his full Bayern debut in June 2020. A few months later he featured as a substitute in the German side’s DFL-Supercup win over Borussia Dortmund.

The young defender went on to represent Bayern in the Bundesliga and Champions League before joining 1899 Hoffenheim on loan in 2021. He has played a total of 82 professional matches.

Richards began his international career early, too, competing with the US Under-20s to win the CONCACAF U20 Championship aged 18. His performances at this level earned him a senior debut in November 2020, coming on as a substitute against Panama. Richards has since amassed seven further caps.

Having put pen to paper in south London, he said: “I grew up watching the Premier League and grew up of course watching [Wilfried] Zaha, so it’ll be cool to spend some time on the field with them [the Palace players] and be a part of this historic club. I’m really excited for it.

“The kind of project I’ve seen [attracted me]. It’s a lot of young players but also young players who have a lot of fight. Palace is a club that seems like they’re always fighting.”

Chairman Steve Parish said: “Chris is a hugely talented young player, and he brings a lot of experience at a high level for his age, as well being an established International for the USA national side.

"I had the great pleasure of spending some time with him and his family yesterday and I know he will be a great fit for the club and I’m sure will become a firm fans’ favourite. Competition can only drive him and our squad on.”