Jesurun Rak-Sakyi has been named Crystal Palace’s Under-23 Player of the Season.

Attacker Rak-Sakyi helped Palace finish fifth in the Premier League 2 Division 1, their first campaign in the top-flight of Academy football. 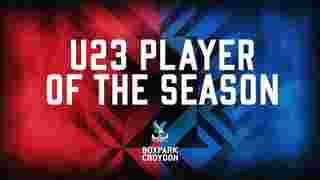 He made his Premier League debut in August 2021 against Chelsea and was named Premier League 2 Player of the Month for February 2022. Throughout the campaign he trained with Patrick Vieira’s squad, with the manager saying of him: “He’s a young, talented player and we have to work with him to try to help him.”

Rak-Sakyi also had a strong season internationally, marking his England Under-20 debut by scoring against Romania.

He collected the Player of the Season award from Under-23s assistant manager Darren Powell at the club’s free-to-attend awards night.

Rak-Sakyi said: "It's been a great season, not just for me but the whole team. I'm very thankful. It's been great [training with the first-team].

"It's been my best season so far. I've been working so hard this season and am grateful for everyone who's helped me."

Jes joined by Tayo Adaramola as a young prospect to earn recognition at the End of Season Awards, with the young full-back named Under-18 Player of the Season.