Marc Guéhi has been voted Crystal Palace Players’ Player of the Season 2021/22 by his teammates.

He has been pivotal to Palace’s success over the last nine months, playing 40 times, more than any other player. He has helped to keep 12 clean sheets, and even chipped in with four goals. 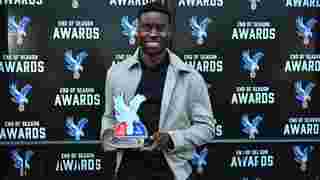 The 21-year-old summer signing has also captained the side on occasion this season and fitted in to Patrick Vieira’s ball-playing defence immediately. His contributions saw him named Player of the Month for March, Man of the Match in the club’s FA Cup semi-final and earned him a richly deserved England debut alongside fellow winners tonight, Gallagher and Mitchell.

The centre-back was presented his award by captain Luka Milivojević at the club’s End of Season Awards evening at Boxpark Croydon.

"There are plenty of fans to vote for Player of the Year, but when it comes from the players it means a lot. This season I didn't know to who this award would go... out of the players I've been with for four years at Crystal Palace, many came this season to do an amazing job for the club."

After saying 'wow' upon announcement, Guéhi added: "We spend an entire year together so for them to vote for me feels amazing. I really don't feel I deserve it!

"Having these guys to play with has been amazing, so I've really enjoyed it."