Young holds a close role to the players, ensuring they can focus on training and playing by organising a wide range of responsibilities. Pinning his exact role is something of an ongoing challenge, such is its breadth.

Manager Patrick Vieira summarised this by saying: "It's difficult to really describe what he's doing because he's doing everything." 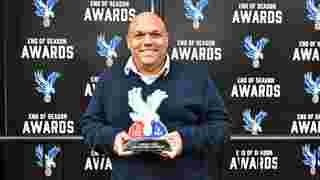 Wilfried Zaha added: "He has 20million conversations on his phone, 23 players, and he goes around joking with everyone. He's one of the kindest people I've met in football."

Eberechi Eze added: "He's one of the best guys I've met in football, just because of how caring he is, how much he wants to help and he'll sort you out with whatever you need. I've never met a guy like him."

Young joined Palace in November 2013 as Head of Kit, and absorbed the role of Player Liaison four years later. Today his role as Head of Player Care spans across the first-team and Academy as he approaches his 10th year with the club.

The Chairman’s Award is decided by Steve Parish and presented to club figures who have served exceptionally, or made a notably significant contribution. Previous recipients are Julián Speroni, Damien Delaney, Scott Guyett and Mile Jedinak.

Young collected his award from the Chairman at Boxpark Croydon, where the club hosted its free-to-attend End of Season Awards.

Parish said: "We are a very special football and the reason we are is not just the fans, not just players, but special people who work for us. And they do more than work for us, they give their lives for the cause."

Young commented: "Whatever you ask, I'll do. It's not a problem. They [the players] make my job so easy because I get on so well with everyone of the lads. I've not got a bad word to say about anyone; it makes my life getting up every day no problem at all."

Also scooping awards on the night were Wilfried Zaha (Goal of the Season v Norwich away) and Tyrick Mitchell (Young Player of the Season).