Adaramola wins Under-18 Player of the Season after debut campaign

Tayo Adaramola has been named Crystal Palace’s Under-18 Player of the Season 2021/22.

The 18-year-old full-back enjoyed a stellar personal campaign, making his first-team debut in the FA Cup against Hartlepool United and his first senior start in the following round v Stoke City.

Following his first start he said: “It was an amazing feeling, a feeling I’ll never forget. I’m just happy I could do this with my family and friends around me too. It’s a happy moment for me and a happy moment for the Academy as well.” 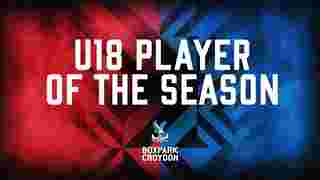 At Under-18 level, Adaramola has played nine games and scored once in 21/22, and playing up a level for the Under-23s he featured in 17 matches, also scoring once.

Adaramola said: “It's been a great season. I've enjoyed it a lot, and I'm looking forward to the next.

“That feeling [making my debut] was so surreal. It’s a feeling I’ll never forget. I just hope I can have many more opportunities in front of the fans at Selhurst Park.

“The boys have been great, all the first-team players and staff every time I come up. I'm just grateful for the opportunity to train with them and learn from them every day.”

Under-18s manager Rob Quinn presented Adaramola with his award at the club’s free-to-attend ceremony, and added: “I’ve loved having the privilege to manage the group of players we’ve got. It’s been an exciting season, frustrating at times, but I’ve really enjoyed it.

“This group of players are very special. Loads of them can go and develop further at this football club. It’s a pleasure to be involved.”

Under-23s manager Paddy McCarthy has previously said of the left-back: “When you see Tayo in full flow it can take your breath away, but his stand-out quality is his attitude. He wants to do more and more and more; he’s an enthusiastic young man and a credit to his family.”

Tune-in to Palace TV+ to watch the full ceremony live!