Tyrick Mitchell has been named Crystal Palace’s 2021/22 Young Player of the Season.

This award has returned for all men’s first-team players aged 23 and under, and is decided by the club. Mitchell, facing competition from the likes of Conor Gallagher, Marc Guéhi and Michael Olise, collected the accolade for a phenomenal personal season that included an England debut.

The 22-year-old left-back has featured in 38 games this season, notching two assists and helping to keep 11 clean sheets. 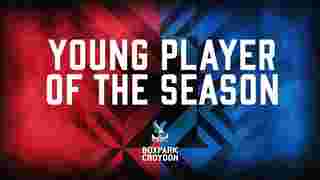 He earned his first England call-up in March 2022 alongside Marc Guéhi, and made his debut five days later in a 2-1 win over Switzerland.

Domestically Mitchell won Player of the Month for November and was nominated for Young Player of the Year at the London Football Awards, an accolade that eventually went to teammate Gallagher.

Mitchell’s former Under-23s coach and now first-team coach Shaun Derry presented the full-back with his award, saying: "It's been a great year, a fantastic year.

"They set the standards every day and it's been brilliant to watch them on Saturday, Tuesday, Sunday, whenever we're played. It's been a brilliant season. You've just seen some of the young boys get their accolades, Tayo and Jes, but there's many more to come."

Mitchell himself commented: "It's been a brilliant season for me personally and the team. It's been amazing, hearing them [fans] cheer your name is something I dreamed of. City away was one of the best [performances]."

Tyrick isn’t the only youngster who’s been commended at the club’s free-to-attend End of Season Awards, with Tayo Adaramola and Jesurn Rak-Sakyi winning Under-18 and Under-23 Player of the Season respectively. Twenty-year-old Aimee Everett has also won Women’s Player of the Season.