As Crystal Palace and the wider footballing world mark Holocaust Memorial Day (27th January), goalkeeper Jack Butland has recalled his visit to Auschwitz concentration camp in Poland for the FA.

The visit came under then-England manager Roy Hodgson in 2012, ahead of the European Championship finals. Butland – the youngest member of the party that day – reflects on the visit and how it impacted him in the long term, published below with the FA's full permission.

My perspective on visiting Auschwitz has actually changed since I've become a father.

I was still a teenager myself when, having been brought into the squad for EURO 2012 after John Ruddy got injured, we had the opportunity to go there. Before flying out to the tournament, we'd actually met two Holocaust survivors: Zigi Shipper and Sir Ben Helfgott.

They're incredible people, not only to have survived, but they have to carry with them everything that they saw and that they witnessed during that period of time. The stories they told us, of being stripped away from their families and things like that... while massively impactful, they felt a little hard to imagine, living as we do now. Meeting them sowed the seed for when we did go out there, to Poland.

Visiting Auschwitz was a voluntary thing and I don't hold it against anyone who didn't want to go, because I can completely understand why – especially once you've been there. I remember thinking that it was something vitally important, both for me to see but also in terms of the history of the world. 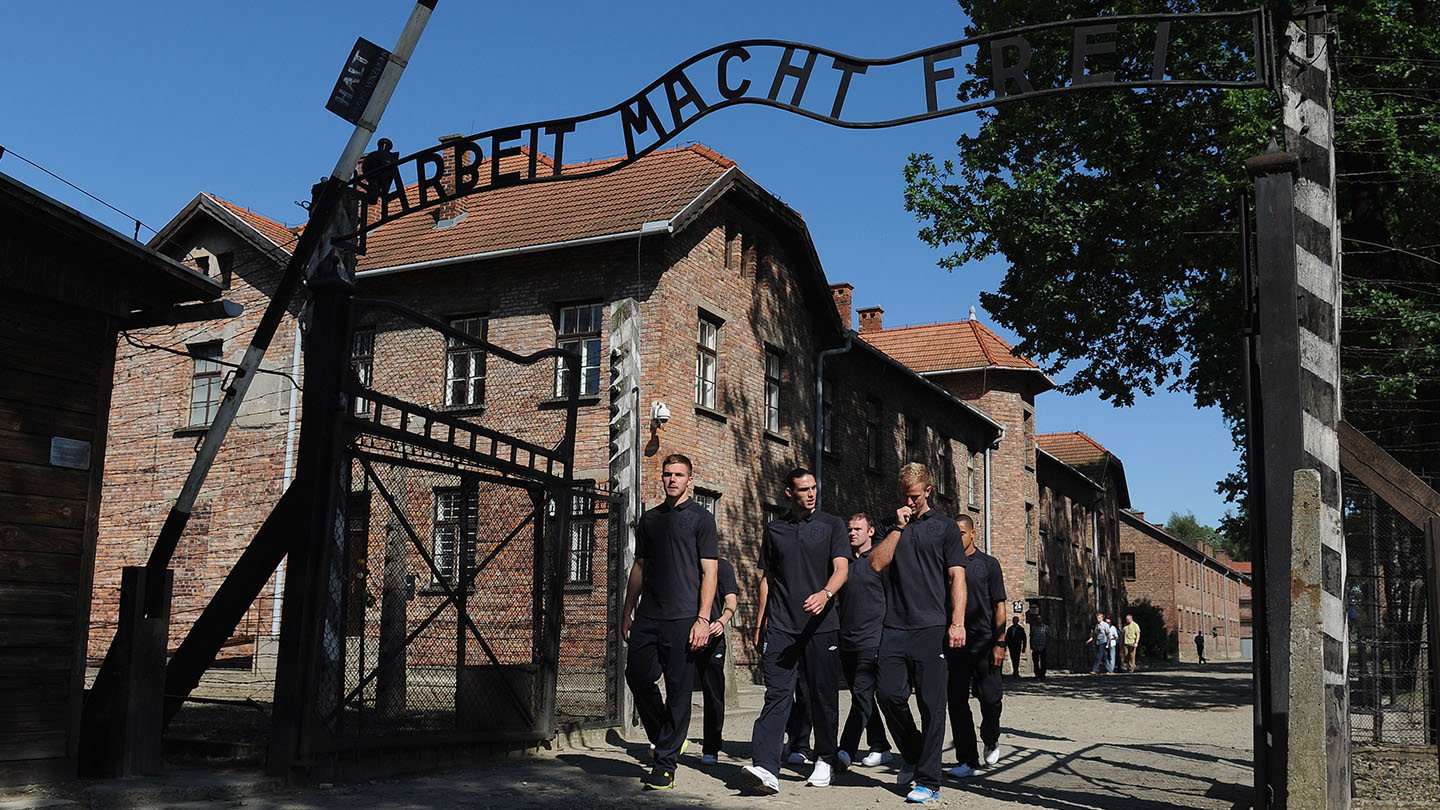 I felt really intrigued – I wanted to go and learn more, knowing that it might be the only opportunity that I get to experience that.

I've always been quite interested in history. I enjoyed it at school so I considered myself well-aware and well-versed in what went on in the First and Second World Wars. Ultimately the Holocaust was probably the most horrific thing that you could ever imagine or be taught as a young person at school so, even before going to Auschwitz, it had an impact on me.

Even so, I remember being on the bus over with the rest of the group, including some staff, and we were talking as normal. It just felt like a fairly normal journey.

There was a definite amount of wonder – if that's the right term – as to what we'd see, but I don't apologise for not being sat there in silence because we just weren't prepared for what we were going to come across once we arrived.

When we were dropped off at the entrance, the first thing that struck me were the grand, arched gateways. They almost looked professional, deliberate, which left me thinking that, even with all of the horrendous things that happened there, it was built for purpose.

You could feel the ruthlessness of the place, about how it was put together. I felt shivers from that point on, really. 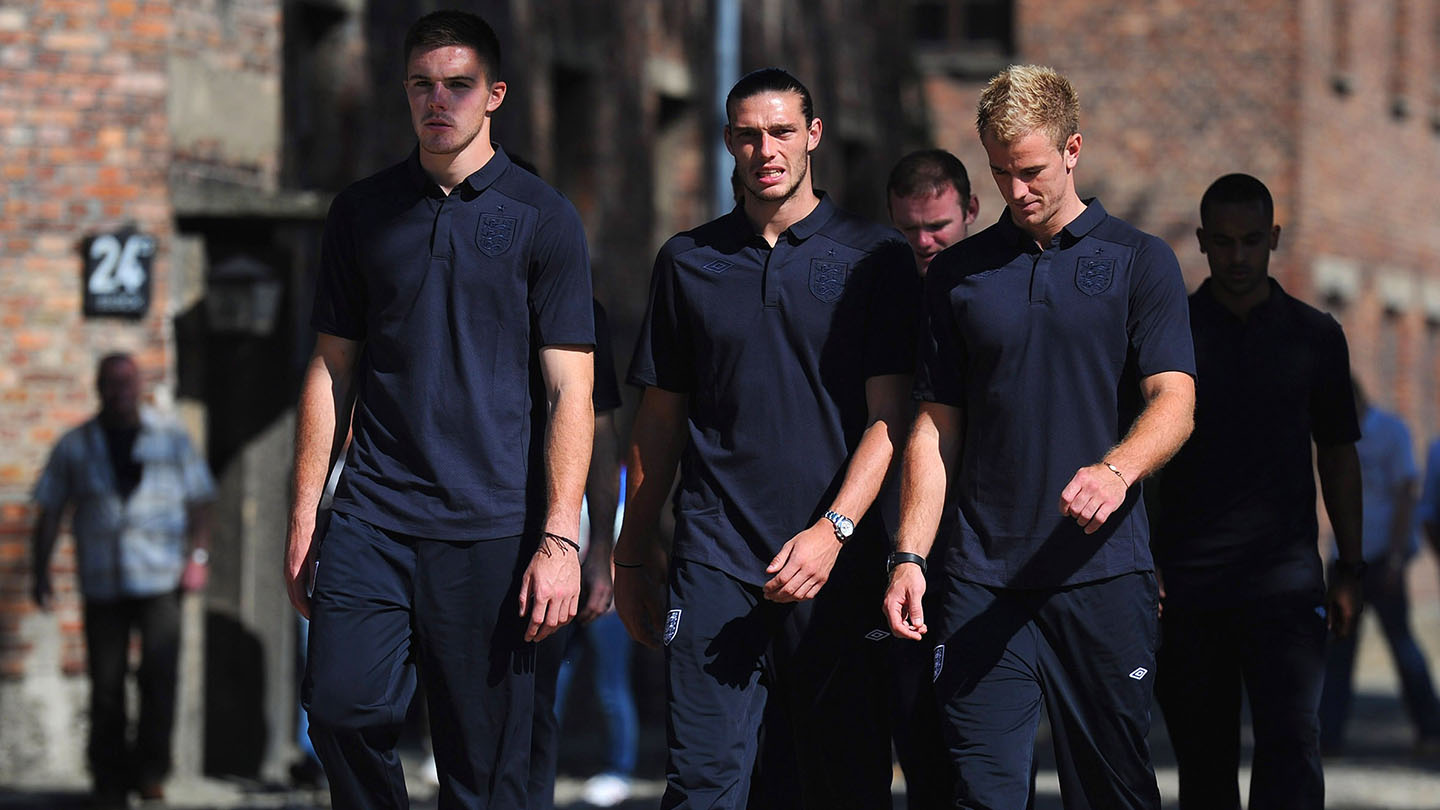 One of the first things we did was stand where the trains would've pulled up when people arrived at the camp. You could just imagine being stood there, having been dragged with your family from whatever town or city you were living in.

Things had gone wrong long before then, but that would've been the point that these poor people knew: that was it. You were being split up from your wife, your kids, your grandparents and then there was no going back. No escape.

I just remember feeling sick, feeling cold and generally feeling full of disbelief that this was real life we were being told about. This wasn't a film set.

Imagine that in your own life: getting off the train at Euston or wherever and being dragged apart, knowing that it'd be the last time you'd ever see your family. I was just horrified by it. 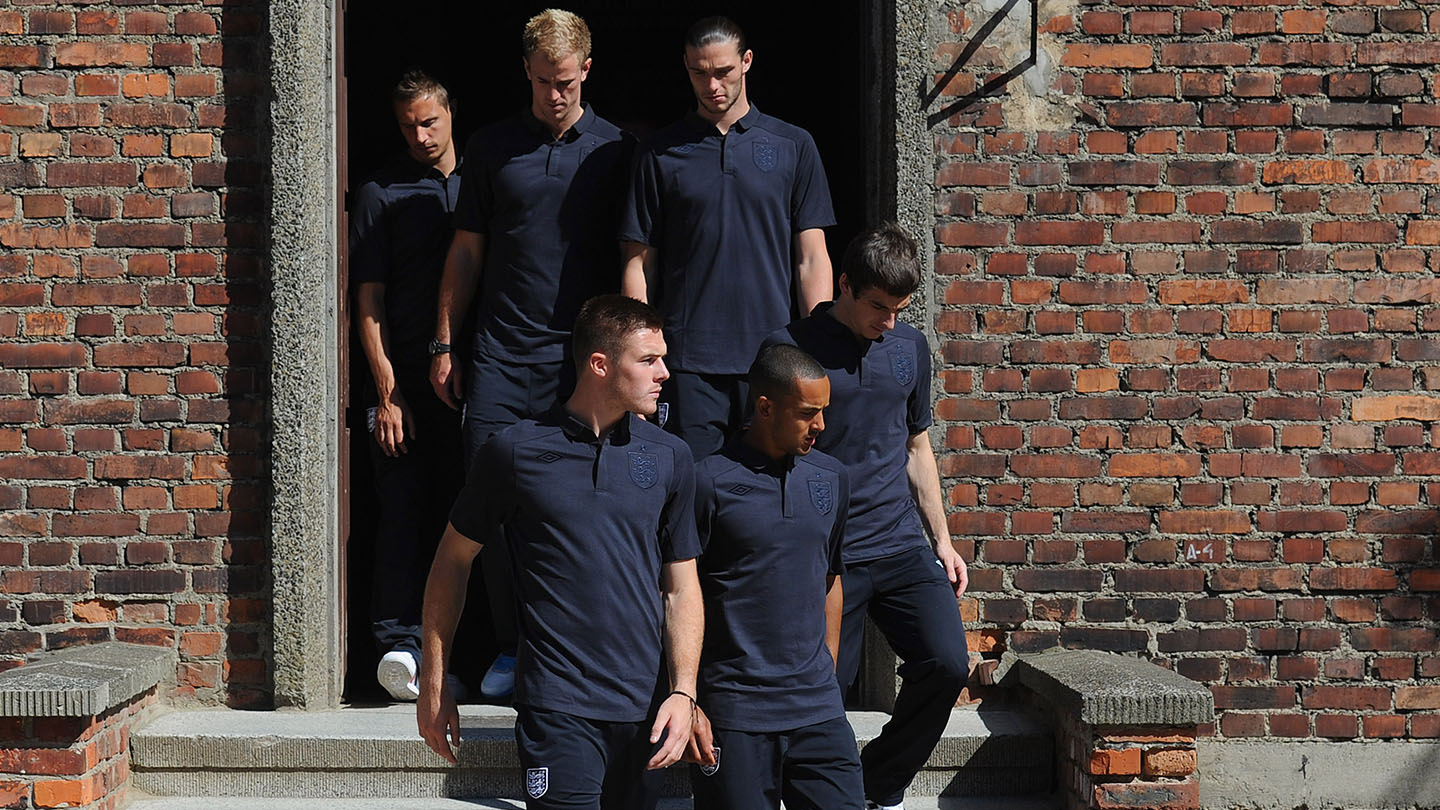 As the tour went on, we were told about the millions and millions of people who died during the Holocaust. Initially, the numbers didn't really hit home. It's literally an incredible amount of people.

But, as we continued, I remember the moment that really got me. There was one building that had been converted into a museum – if it deserves to be called that – with rooms that were boxed-off with perspex screens.

One of them was absolutely filled with shoes that had been taken off of people as they arrived at the camp. Children's shoes. Babies' shoes. You could never count them. It was a mass that was so great that you couldn't get your head round it.

The horrific feeling that came from that would only get worse and worse as the day went on, like when we stood inside the gas chambers and thought about the amount of people that had been crammed in there. By the time we left I felt completely empty, like my soul had been ripped out. 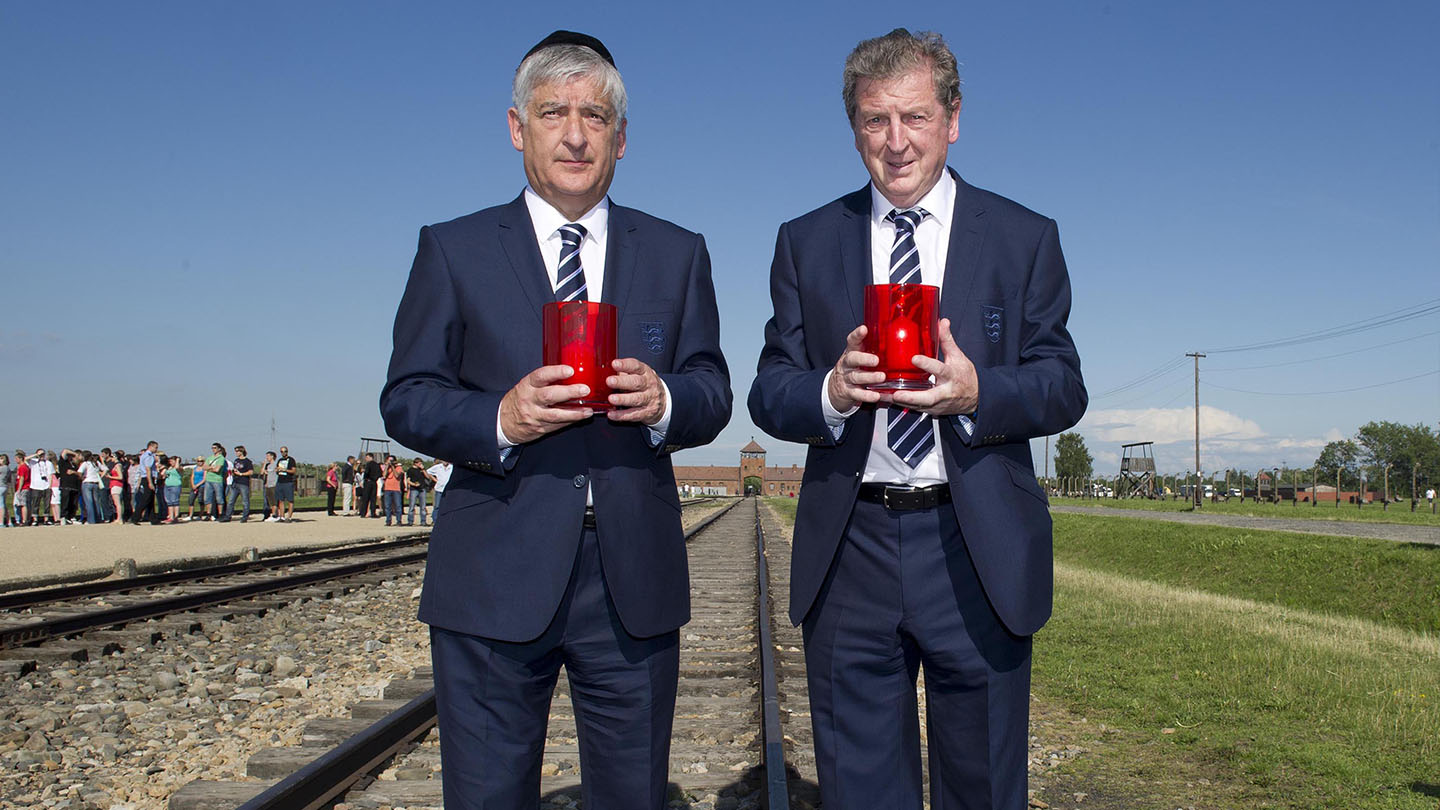 The contrast between the bus rides to and from the camp sums it up. On the way there, it felt like a relatively-normal bus ride, between teammates and friends. We were just completely unaware of what we were going to experience. We'd all heard the stories or seen the pictures, but we had no idea.

I needed my family to know where I'd just been and what I thought of them but I didn't really think that it was acceptable to pick up the phone and call home at that point, because I didn't want to disturb the silence. Everyone just couldn't believe what they'd witnessed.

Now that I've got a little boy, it really puts things in perspective. I'm glad I didn't have him at the time because, when I saw those shoes, I think I'd have had to go home there and then. Words and numbers can give you an idea and paint a picture, but when you see something first-hand and have the chance to really understand, it hits you so differently.

It was at that moment I felt most understanding of what people experienced in the Holocaust. That was as bad as I've ever felt: looking at those shoes and understanding the scale of how many people had their lives torn apart, had everything taken off them and killed – all in the space of hours or even minutes of getting off that train.

I believe everyone has the right to believe in whatever they want and to be treated right. Unfortunately, to a certain degree, we still see discrimination in the world today – against certain beliefs and against people's values.

Discrimination is still one of the biggest dangers we face in society and it comes in all forms. Going to Auschwitz made me think: can I do more? Can I be more open? Can I be more sensitive to other people's beliefs and values? The answer is: of course.

I am very fortunate to play football and have this job because it puts me in an environment of different cultures and different religions every day. Experiencing Auschwitz and learning about the Holocaust can only make you more welcoming, open and understanding of others' religion and beliefs.

Despite the things I saw that day, I am so glad that I went. It was a horrific experience but I got to come away from there when millions of others didn't. I consider myself very lucky to live in a time that I was able to visit such a place and learn about it.

The Holocaust should be seen as a lesson and a deterrent against the effects of discrimination, so I'd just encourage people to do more and to learn more – both about history and also about our current way of life to ensure that we're preventing such a disastrous event as that from ever happening again.

Crystal Palace Football Club and footballers across the nation are calling on people to light a candle and place it safely in their windows at 20:00 GMT tonight (27th January), to commemorate the victims of the Holocaust and stand against prejudice around the world.

You can find out more about Holocaust Memorial Day here.

On #HolocaustMemorialDay, light a candle and safely place it in your window at 8pm on 27 January. To remember, and to stand against prejudice in the world today. @HMD_UK pic.twitter.com/Ir2n94LCRq